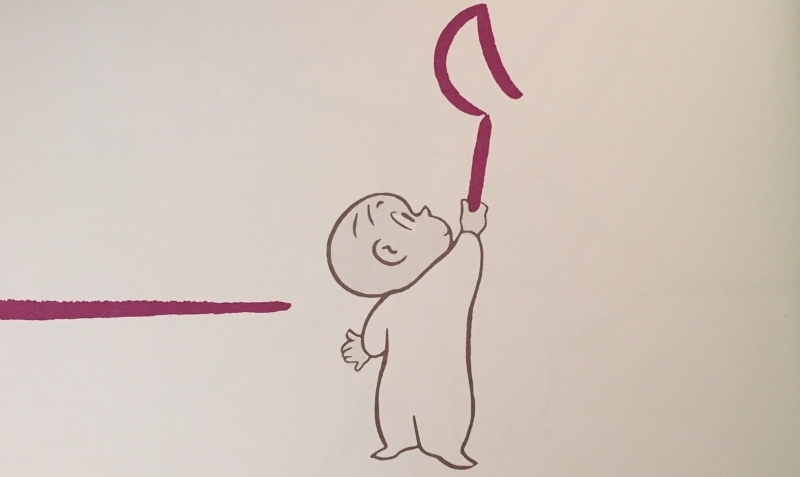 For some frustrating reason, I’ve lost a lot of specific memories from my time as a young father; that period is now like a home from my past that I yearn to visit, but is always out of reach. And yet I can vividly recall the night I first read Crockett Johnson’s celebrated children’s book Harold and the Purple Crayon to my three-year-old son, Max. I spotted it buried in a pile of books on his shelf, a jumble of mostly hand-me-downs from Max’s brother and sister. Beneath the cheery primary colors of works like Eric Carle’s The Very Hungry Caterpillar, Sandra Boynton’s Hippos Go Berserk! and Margaret Wise Brown’s classic Goodnight Moon, there it was, distinguished by its more subtle pallet, a monochromatic scene of magenta, purple and deep, dark scarlet on its cover.

I live a lot in my head. So, I’m a little embarrassed to admit that it wasn’t the father-son intimacy of that moment that has so deeply affected my memory of reading Harold that night. What stuck, instead, were the ideas in the book. I’m trained as a psychotherapist, but my Ph.D. is in sociology. In both fields, I’ve been preoccupied with questions about play and originality in our lives, and, on the opposing side, conformity and psychological emptiness. Suddenly, reading that book to Max felt like I had unearthed a sacred text, written by an ancestor, with important messages about these very issues.

If you haven’t had the good fortune to read it, Johnson’s book tells the story of Harold, a boy who is always alone with his crayon. When Harold doesn’t use his crayon to draw, the pages of his book are nothing but stark whiteness. When Harold deploys his mighty crayon, however, he draws a world in which he embarks on a hero’s journey that eventually leads him home.

Harold and the Purple Crayon belongs to a pantheon of books that exhort children to follow their imaginations. In this, Harold is brother to Alice, Dorothy, Lucy Pevensie in “The Chronicles of Narnia,” Max, who goes “Where the Wild Things Are,” (and whose author, Maurice Sendak, was a protégé of Johnson) and a long, long list of others. And yet, like the best of these books, I think there is a deeper, more complex and novel message in Johnson’s work about why an imaginative journey is worth the effort.

That particular message, I believe, is about how to maintain one’s dignity in the face of forces that want us to conform. Harold holds sacred the unique intuitions, impulses, values and tastes that render him a self, and he deploys his crayon when this unique rendering is threatened. Thus, the thing he uses to protect his dignity and the thing he’s protecting that makes him dignified are the same: his one-of-a-kind soul.

You might think that my interpretation of Harold and his intentions is the result of moving from the heart of sentiment to the head of analysis and formulation and imposing my intellectual preoccupations on a simple children’s book. I really don’t believe this to be true, and, if you’ll bear with me, I will explain why.

Harold was born in 1955. So was the first McDonald’s, the original link in a chain that would cover this country (and, eventually, the world) and supply a uniform set of flavors at every location. Coca-Cola was first produced in cans in 1955 in order to make it easier to distribute millions of the identical concoction. It was also the year that Disneyland, a terrain of manufactured imagination and an automated, assembly-line approach to our most interior experiences, opened its gates.

The 1950s have also been dubbed the “age of advertising” and the “decade of consumerism,” and television played no small part in that. In 1950, approximately six million homes had TVs; five years later, the number was closer to 46 million, which offered advertisers of mass-produced products and experiences unprecedented access to consumers.

Thanks to the growth of a “managerial class” and the standardization of production, work, too, was becoming more standardized. Where people returned to after work was rapidly changing, as well. Suburban sprawl spread from cities into farmlands and woodlands, and each house looked no different than the next. People in 1955 were engaged in “a kind of blind, desperate clinging to safety and security at any price,” as Richard Yates put it in Revolutionary Road, a novel about suburban life set in said year. In many ways, he was right.

The thing he uses to protect his dignity and the thing he’s protecting that makes him dignified are the same: his one-of-a-kind soul.

The Lonely Crowd by Philip Reisman and his colleagues, a classic book from 1950 that is considered one of the greatest works of American sociology, warned of a populous in peril. Americans, according to the authors, were becoming “outer-directed” as they surrendered “their social freedom and their individual autonomy in seeking to become like each other.”

The great psychoanalyst and social critic Erich Fromm echoed these concerns in his 1955 book The Sane Society, which was concerned about a growing “alienation,” in which people become “out of touch with [themselves]as [they are] out of touch with any other person.” Such concerns about the emptying of our existences were very much a part of the thought in the 1950s; I think that Crockett Johnson was worried about these dangers, too.

Crockett Johnson began his career as an illustrator in the late 1930s by creating cover art for The New Masses, a leftist magazine focused primarily on fighting the growing menace of fascism, a political force that quashes “inner-directedness” in service of conformity. Although Johnson later moved to more established magazines, and then to his famous “Barnaby” cartoon series, Harold was a sort of return to the subject of his earlier work. Stripped of overt political statements, the book remains a salutation to the liberating and even disobedient elements in creativity, as well as a warning about the serious danger of a uniform and standardized world whose citizens are willing to relinquish their purple crayons to others.

As the forces of consumerism threatened to consume us, Johnson’s little pal Harold allied himself with the resistance instead: with the beboppers and other jazz masters; with the Beats, the folk revivalists, the modern dancers and the rock-and-rollers; the critical theorists, the existentialists, the Mattachinists and the absurdists; the pop artists and the foul-mouthed comedians and anyone else in this era who not only stood in defiance of conformity, but pushed against it. Harold and his cadre were fighting for the liveliness in their—and our—lives. They were fighting for the thing that makes us most human: our capacity to be spontaneously inventive.

In 1955, the struggle for originality was not simply an artistic pursuit or a matter for social science, it was also a religious concern that was at the very center of a massive act of protest. Martin Luther King Jr., catapulted into fame in Harold’s birth year by his involvement in the Montgomery bus boycott, the largest civil-rights protest in American history thus far. King’s idea that there was something sacrosanct about the “content” of each of our unique “characters” was a reflection of his belief in what he called “the sacredness of human personality.” For King, our dignity and our ability to fully be our original selves were intricately entwined.

Harold and the Purple Crayon was, in fact, very much a part of the activism, literature, art, theology and thinking of this time, a proponent of our right to be original, but also a warning about the giant wave of outer-directedness that was cresting over humanity and emptying individuals of their ability to speak from their unique experiences.

You don’t know what you treasure until that thing is threatened. As Johnson and his cohorts scrambled to protect their valuables, they spoke loudly about our sacred right to originally draw our lives, and each planted a message for future generations to excavate and read.

The best children’s books deliver deep messages about our existence with few words and lots of pictures.

Reading Harold to Max, our heads lightly touching on his pillow, each of us perusing the unearthed treasure held in my hand, that message hit me hard. At that time, I had lost hold of the feeling of being original at anything. Despite my newly minted Ph.D., and all the promise it offered, I was working in a bureaucratic position at a community mental-health center. I had become a part of the managerial class—a “gatekeeper” whose days were designed by “yes” and “no.” I was happily married and raising three children, but things still felt empty.

Halfway through my recitation of Harold, I could hear Max’s breath deepen and then the signal of his light clicking snore. That night, however, I didn’t tiptoe out of the room as I usually did. I kept reading silently, my heart aching a little, my anxiety rising, as I contemplated how far I was from coloring my own life.

I was, however, also inspired. Johnson showed me a way forward that had less to do with finding my way, and everything to do with getting lost in the art of making a life.

Did a simple children’s book teach me all that? Yes, it did. The best children’s books deliver deep messages about our existence with few words and lots of pictures. The idea that because they are written for children, they lack depth, is not only insulting to children, but hurts the very adults who need to read their messages. So much in children’s literature is a story about a child’s struggle to be held and contained by older, wiser others, and the life-giving need to rebel when their authority is capricious or too much. That is a message about childhood, but in it, is also the message about what we need as adults.

Harold offers an important message about connection and community and it’s this: when you do something that sets you apart, you are part of something. You are not alone when you bring the uniqueness of you into the open. Johnson urges you to pick up your crayon not only to sanctify your life, but as your means of connection to the world around you. In the words of the social philosopher Ivan Illich, his tool is a “convivial” one, meant to conjure life with others.

Go ahead, says Johnson, break free from your isolation and join the crowd of dignified originals who walk together, cherishing what makes each of us “sacred personalities” and thus fighting for each other when they fight for themselves. You might be worried that somehow you’ll lose yourself in the fervor of their cause, but they are the furthest thing from a mob. 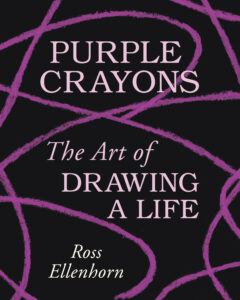 Ross Ellenhorn, PhD, is an eminent thought leader on innovative methods and programs aimed at helping individuals diagnosed with psychiatric and substance-use issues recover in their own communities, outside of hospital or residential settings. He is the founder, owner, and CEO of ellenhorn, the most robust community integration program in the United States, with offices in Boston, New York City, and Raleigh-Durham. Dr. Ellenhorn is also the cofounder and president of the Association for Community Integration Programs, and the founder of two lecture series that aim to shift current behavioral health paradigms. He gives talks and seminars throughout the country, and is an in-demand consultant to mental health agencies, psychiatric hospitals, and addiction programs in the United States and Europe. Dr. Ellenhorn is the first person to receive a joint PhD from Brandeis University’s Florence Heller School for Social Welfare Policy and Management and the Brandeis Department of Sociology.

A Strange and Uncomfortable Coupling: My Summer of Susan Faludi and Karl Ove Knausgaard 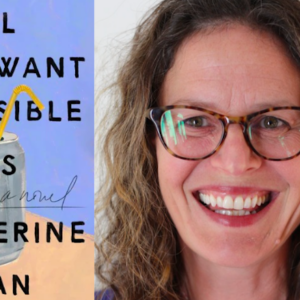 Once upon a time, Catherine Newman and I worked together. Our day job involved dreaming up craft projects to help parents...
© LitHub
Back to top
Loading Comments...