On a Desperate Journey to Ciudad Juárez—and the Costly, Dangerous Reality of Abortion in 1968

One Woman’s Story of Pregnancy Termination

In 1968, Sherry was done with San Francisco. The Haight had lost the carefree, anything-goes air that had drawn her into the city in the first place, and now it was infected with a stench of addiction and death that was wearing on her. She was tired of hearing about friends overdosing, sick of the fear that the drugs that were supposed to transport her, unscathed, to another world could be laced with something that would end her. She had a child to think about—a son, whom she adored.

Plus, the guy she was living with at that time had just gotten busted for marijuana possession and taken to a prison in Chino, at the other end of the state, to serve out a short sentence. She was twenty-three or twenty-four, and she was, in her own words, young and crazy and alone. Why not? she thought. So she followed him, settling in Los Angeles so that she could visit him from time to time; maybe, she thought, they could find a new life together when he got out.

Sherry, a white woman, had no money to speak of; she carefully measured out a living for herself and her two-year-old son on welfare. After rent, she had about a hundred dollars a month to work with. She tried to sustain the electricity of being in a new city, but the spark kept getting stamped out by her loneliness. She met a girl, about her own age, who lived in the same apartment building and recognized that she was hemmed in.

“You need a night out,” the girl insisted. It did sound nice—the promise of a new friendship, an evening among the city lights rather than looking out at them from a distance, a break from the constant stress of what comes next. A neighbor she had come to trust promised to look after her little boy, and so it was decided. She kissed her son and left, still wearing her daily uniform of jeans and a T-shirt; nothing fancy for a casual night out in a new city with new people. She wasn’t trying to impress anyone; she only wanted to breathe and stretch and be.

From there, she remembers only that she was raped.

When she says it out loud, the tone of her voice is matter-of-fact. It is what it is; it happened. She never saw him again; she doesn’t know his name. He had some connection to the girl and her boyfriend, who she never spoke to after she was raped; it was too much to look at them, much less tell them what had happened to her, and besides, what would be the point? She only knows that she said no, and he did not care.

When she missed her period, she knew deep down that she was pregnant, but the trauma of being raped was too heavy and fresh. She couldn’t let herself believe this was now happening to her, too. Weeks went by, and she would try to explain away the changes in her body as simply hormonal, as symptoms of posttraumatic stress, and all the while the pregnancy grew inside her as time ticked by, ever louder, insisting that she do something.

The expanse of LA was overwhelming, and it was hard to imagine there was anyone in the never-ending city of millions who she could talk to. She certainly couldn’t tell her family or any friends. The only person she truly trusted nearby was in prison, and she couldn’t wrap her head around a way to tell him what had happened. But then she remembered an acquaintance, her roommate’s friend who had worked registering voters in Mississippi and had ridden with the Freedom Riders.

She knew he came from a progressive family in LA, and she desperately wanted to talk to another woman about her predicament. When she had mentioned she was moving there, he had given her his mother’s phone number and told her to use it if she needed anything. Now she did. She didn’t say what was wrong on the phone, only that she had a problem, and would Cynthia please come over so they could talk.

Cynthia pulled into the apartment complex parking lot a few hours later. It was awkward at first. How do you tell a complete stranger that you were raped, and then you were ensnared in the resulting trauma, and now you need an abortion? She doesn’t remember exactly how she managed to get the words out, but together, they came up with a plan. Cynthia found what was known as “the list”—compiled and meticulously updated by abortion rights activists. The list was essentially a directory of abortion providers in Japan, Sweden, and Mexico. Sherry recalls that the only condition to use the list was to one day share your abortion story, an obligation

she says she was not ready to fulfill until she spoke to me for this book. “I’m almost eighty now,” she told me. “And before I die, I have to talk about this, I really do.”

It was decided; she would go to Ciudad Juárez to have an abortion, but it would cost her. She had to borrow $500 from Cynthia, since she was quickly approaching the third trimester, and she had to prepare for a four-day stay and an unfamiliar medical procedure in a country that was not her own. By the time the plans were made, a tentative bond had formed between the two women, and Sherry left her son with Cynthia, telling him that she was going to visit her mother and she would be back in a few days. “I don’t know what I would have done without her,” Sherry says.

She didn’t dwell on her abortion—it did not define her—but it did make possible the world she ultimately built for herself.

On the plane to El Paso, she tried not to think too much about what she was about to do and instead focused on the feeling that she would soon be able to move on. The hospital sent a car to pick her up from the airport. They drove across the Rio Grande into Juárez, wordlessly, and directly to the clinic, which was a section of a larger hospital. The $500 covered not only the procedure itself but also her hospital stay and her travel to and from the clinic all the way from Los Angeles; she recalls the medical practice providing a sort of travel service with the procedure.

When she arrived, she settled into a waiting area, where she sat for hours among a gaggle of young women, who looked to be in high school or college, and their mothers. Most of them seemed to be from the Midwest, and she was surprised to find that everyone she spoke to was soundly against legalizing abortion. “I think it was, ‘It’s OK for people who can afford to do this, but it’s not OK for anybody else,’” she recalls. “It was very bizarre—they were all white.” Most of them came and went: because their pregnancies were in earlier stages, they needed to be at the clinic for only four hours or so. But because Sherry was approaching her sixth month, she would have a much longer stay.

The trip itself was put together out of desperation, and Sherry hadn’t known what exactly to expect because she had never been to Mexico or had an abortion, but she had heard tales of dirty, greedy Mexican men who had no business providing any sort of medical care. Now, the racism that lurks behind the prevailing stereotype is more evident, but then, she was relieved to find that the clinic was bright and clean, and the nurses were friendly, warm women who helped her order food in Spanish from the restaurant next door.

She doesn’t remember much about going into the abortion or what it felt like to wake up from the anesthesia—everything is lost in a daze of apprehension that gave way to relief. She still felt slightly off when she got into the car to cross back into Texas, but she dismissed it; surely it would lift with time. She was hot and uncomfortable, but she had to get home to her son. She grabbed her bag and trudged from the car into the airport, but she was soon overwhelmed with dizziness, and she lost consciousness momentarily. She came back around and desperately shook just enough fog from her mind to stumble to a pay phone and call the clinic. They brought her back to the hospital to treat the infection that was causing her body to burn with fever and her muscles to shake. She stayed in Juárez for an extra day, hooked up to an antibiotic IV drip that eased her temperature back down.

When she returned home, her life regained its former shape. She found she could begin to move forward. She made friends, she learned to love Southern California, and she continued to be active in the antiwar movement. She went on to help start a center to care for women with mental health issues, and after that, she became a labor organizer. For the next several decades, she lived precisely the rich, full life she had. She didn’t dwell on her abortion—it did not define her—but it did make possible the world she ultimately built for herself. 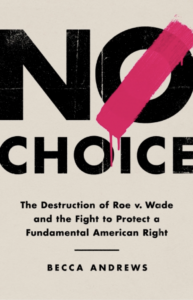 From No Choice: The Destruction of Roe v. Wade and the Fight to Protect a Fundamental American Right by Becca Andrews, available via PublicAffairs.

Becca Andrews is an investigative journalist at Reckon News who writes about reproductive justice, religion, and inequality. Her work has appeared in Mother Jones, Wired, The New Republic, and Jezebel, among other publications. 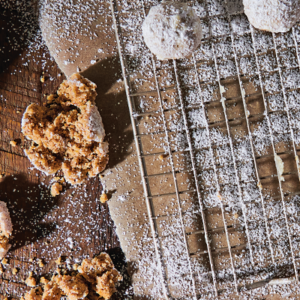 In the process of writing my book, I spent a lot of time researching a variety of resources about exploring our emotions....
© LitHub
Back to top
Loading Comments...