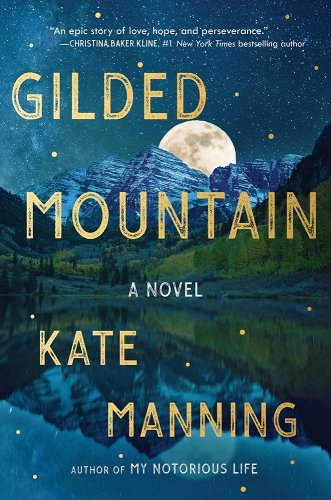 The following is from Kate Manning's Gilded Mountain, a novel set in early 1900s Colorado about a young woman who bravely faces the consequences of speaking out against injustice. Manning is the author of the critically acclaimed novels My Notorious Life and Whitegirl.

With numb stumps for feet, we got down and sank past our knees, fighting to the steps. When Henry pushed in the door, the wind took it out of his hand.

Jenkins dumped our last box in the drift and disappeared in the howling whiteout.

“Papa?” A green tuque hung off a peg by the door. His hat.

“Where is he?” Henry’s voice rose in fear.

We found coal in a corner and shoved it inside the stove. Wind through the cracks snuffed six matches, but we got the fire going and pushed close to it in our frozen coats, our violent shivering. The stove heated fast but we did not.

Outside again, I scooped a pot of snow, as light as nothing. It melted over the fire, but the water it made was not much and not yet boiling. The snug house was not snug. It was not a house. It was one room of batten and boards nailed with tacks. Strips of canvas and pages from the Phrenological Journal covered the walls. Newspaper chinked the cracks. The furniture was a table and three short stools. A cushioned chair. A dust of snow on everything.

“L’altitude,” my mother said. Exhaustion came off her like fumes.

Up a ladder was a sleeping platform nailed around the chimney pipe. Pelts of rabbit and weasel were tacked to cure in the rafters. Snowshoes hung on the walls with tools and implements. A flap of tar paper served as the door to a lean-to room just big enough for a shuck mattress, a washstand.

We thawed our fingers, the baby’s toes, with our breath. Our hands and feet itched and burned, turned the bright red of raw meat. Maman found bread frozen in the cupboard, a can of oysters. A can of peas. She handed these to me with a tin punch.

I opened the tins and cut a finger on the sharp teeth of the lid. Blood tinged the oysters pink. We put the cans on the stove to thaw. Maman hacked the bread and heaped bloodied oysters on it. We ate these with spoonfuls of peas from the can and drank weak tea, stunned still in our coats, our hats. We got in the bed in a pile like a litter of animals and warmed each other by shivering till we slept. Papa was not in this house. His hat was not on his head.

Slivers of frozen sunlight came through cracks in the roof. A fur of snow lay across the covers. Boots stamped outside.

“Halloo, allo!” Our lost papa like a stranger flopped on the nested heap of us. “Ma famille, look at you!” He filled the room with his loudness, his happiness, saying all our names. “Cherie! Henry! So tall, Sylvie! So beautiful, my wife!” He wrapped his arms around Maman, around my gangled shoulders and Henry’s. He gazed through the murk, light shining in his eyes, with his first ever sighting of his baby son. “Oh, mon fils.”

In the two years since we’d seen him, my father had altered, his blueblack hair long to the collar, his beard half down his chest. Nipper whimpered and hid his face in Maman’s neck. Papa chinned him with his whiskers and burrowed under the covers, playing peek till Nipper laughed. Papa wrestled Henry. He pulled my hair and made the tail of my long braid into a mustache for the baby, holding it under his nose.

“Jacques!” My mother was rosy with shyness. Happiness.

He made a mustache for her too, and pulled the covers over our heads, roaring. “I’m a cave bear,” he said. White grit powdered his eyebrows, the plates of his hands cracked and silted. “A quarryman’s a dusty man,” he said. It hurt to see how worn he was, haggard.

Maman brushed grit off him. He pressed his brow against her forehead and removed her pins. Her hair spilled down in a dark fall. “Jacques, tété-oú-là? Where were you?”

“Please no more striking.” My mother soothed her hand down over the edge in his voice, over the crown of his head, a new grizzle of gray at his temples. “You promised no more. You said it was no danger in April. But—the storm. We nearly died.”

“You mean Lady Luck,” I said, and they laughed.

He arranged the strands of her hair, tucked it behind her ears. Her hand went up to him, and he caught it, kissed it. She rested her face against his chest. Love was not a word they said aloud, but there it was, what I wanted for myself, un grand amour.

Papa put new coals in the stove, his eyes shiny with emotion. He sang “Alouette” and cooked frozen bacon in the fry pan. He watched us eat, like it was a miracle that we chewed and swallowed. “Today, mes poussins,” he said, “we go out and see the beauty up here in the rafters of heaven.”

We emerged from our burrow into the sun, looking across the ravine at the vast landscape reaching in the distance like a sea. The peaks were waves cresting into the blue. The white glory of it blinded us.

“It’s the Cathedral of God,” said Papa in his showman’s voice. He had traveled with the circus, which was why he could juggle, why he could hang off a scaffold with a chisel and swallow flames. He’d run with the Iroquois, which was why he could see in the dark and nest in the trees (he said). My father had lived in a tent all through a winter. Goldfinches nested in his beard. He spoke Canadian French, and his English was American. He could walk on his hands.

“This place Moonstone is named by the ancients,” he said, “because a piece of the moon fell down from the sky and landed here.” Half his stories were true and seventy-five percent of them were not, he liked to say, no telling which was which. He hoisted Nipper on his shoulders, took Henry by the stalk of his neck. “Let’s go see the sights.”

We followed the snowy boot-pocked track up the slope. I looked for a shop or a church or a school but saw only shacks clinging to the rocky shelf, as I clung, myself, to the hope that I was not now stranded up here on this pointy peak.

“Cabin Five is Setkowski,” Papa said. “Cabin Four is Bruner. Stone house up the hill is for boss Tarbusch and his pocket watch. All these empties are for the summer crew.” He pointed out a long tin-roof building nailed to a cliff face, propped on struts: the boardinghouse. Papa had lived there two years without us. “Mrs. Quirk runs the place. Her commissary can sell you coal or coffee, but get supplies in town. Everything in these Company joints cost a nose and ear.”

He pulled my braid. “What’s funny?”

“Sylvie knows everything,” said Maman. “She is top to her class.” This was a rare show of pride; also a warning: not to be Mademoiselle connaît-tout. Know-it-all. What-all she wanted us to know was la langue maternelle, without the Yankee expressions that corrupted our French. She saw it on me like a rash, the wish for my own words.

We came around the bend and arrived on a flat shelf where workers and horses labored beside a gaping black hole punched in the side of the mountain.

“The Padgett quarry,” said Papa, proud of it.

The entrance was the toothless open mouth of a whale. Hung around it were platforms and derricks, ropes and scaffolding and ladders. Cranes rigged to the crag above poked up like antennae, dangling cables and a massive hook the size of a child. All around the yard, hunks of white rock lay piled like the sugar lumps of a giant.

“The most beautiful stone in the world.” Papa beamed. “Pure statuary white. One big vein with gold in it. A mile long inside the mountain.”

“Pyrite is the foolish gold,” said my mother.

“Fool’s gold,” I said, unable to help myself, correcting her.

“Duke Padgett is no fool. He’s seven times a millionaire,” said Papa. “Watch how we make his money.”

“Heads!” came a shout. A whistle blew shrill blasts. A clot of men surrounded a stone block the size of a grand piano, wrapped in chains. The crane above pivoted and lowered the dangling hook. One fellow leapt atop the stone, and as it began to rise, he held the lifting chains, performed a somersault.

“He’s Setkowski,” said my father. “He rides the white bird.”

Our mother closed her eyes. “Never,” she said.

The crane maneuvered the stone over the lip of the cliff, where it swayed, suspended above the ant bodies of the workers in the yard, fifty feet below. The chain would snap, I thought. The block would plummet and smash the men. It lowered slowly, showoff Setkowski waving his hat, then settled on a waiting flatbed wagon. A six-horse team would haul it down the track to the mill in town.

“That stone, lá.” My father pointed. “A hundred thirty dollars a ton. Thirty tons for a Greek column. Figure how many columns in a bank. A library? Enough stone in this mountain for three hundred years. Add it up.”

“Millions!” Henry said. “Can we go in the quarry and see?”

“The beauty,” Papa said. “When the sun comes in, the dust in the air is gold, like the sparks of God. You’ll be amazed. La Comtesse herself came for a tour.”

“The Duke’s wife. From Bruxelles. She’s Belgian,” Papa said. “You ladies go on back. I’ll take the boy for a look. Moonstone quarry is the Eighth Wonder of the World.”

“Sylvie.” Maman pulled me away from talk of countesses and wonders.

“But—” If I were a boy, I could ride the white bird. If I were a countess, I could go in the quarry to see the dust of gold. But I was a dutiful daughter and forbidden. What else could I not do? A long list. Even here in the Wild West, life would be a sentence of chores and boredom.

Papa saw my disappointment. “Wait for summer, Birdy. Summer is the time, you’ll see. Always there’s flowers on the hills, rainbows in the river.”

“I mean rainbows,” Papa said, and went off off to show Henry the sights.

Maman pointed to the dangling hook. “See the danger? He’s always a fool for the risk, your father.”

I would rather be like him is what I thought. And yet I was like her, obedient and quiet. I took Nipper from her arms.

“What would I do without you?” she said, grateful.

Get Henry to help instead, I thought, but understood it was my fate to help her with her burdens. Henry’s was to go with Papa, to fly through the air on a white stone bird, to see dazzlements. My mother and I walked back toward the safe cage of Cabin Six, away from the Eighth Wonder of the World. My jaw slid forward on its hinge. Whatever marvels there were to see in the Gilded Mountains, I determined to see them.

From Gilded Mountain. Used with permission of the publisher, Scribner Books. Copyright 2022 by Kate Manning.

On a Desperate Journey to Ciudad Juárez—and the Costly, Dangerous Reality of Abortion in 1968 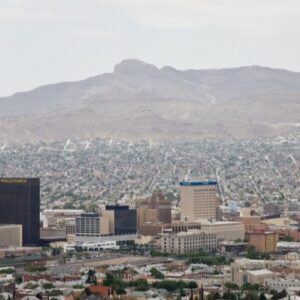 On a Desperate Journey to Ciudad Juárez—and the Costly, Dangerous Reality of Abortion in 1968 In 1968, Sherry was done with San Francisco. The Haight had lost the carefree, anything-goes air that had drawn her into...
© LitHub
Back to top