Cults n' communes, Fahrenheit 451, the March for Our Lives, and more

I’ll be heading uptown on Saturday to join the March for Our Lives protest, weird snowstorm be damned (though by then the city may be tropical—who knows! Global warming!). Both of my parents are coming to the city to join me, which has me feeling very lucky, and grateful. Afterwards, I project a trip to Film Forum to see Leaning Into the Wind, the documentary about Andy Goldsworthy, whose natural installations and interventions seem, in some ways, like bastions against the complete technological takeover of our lives. Then again, I guess going to the movies is participating in technology. Unfortunately, the cookies they sell at Film Forum are just too good for me to change my plan now. 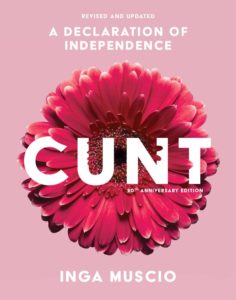 This weekend, I’ll be reading the 20th anniversary edition of Cunt, and reminiscing about that one time I got to say over the loudspeaker back at my old bookstore “If you are looking for a book that we can’t say the name of over the loudspeaker, we have it for you at the top of the stairs.” The girl looking for a copy was able to take one home, and it was by far my greatest overhead announcement. Since that same bookstore got a shoutout in the introduction to the new edition, I felt compelled to share my own experience slinging this masterpiece of feminist literature. I’ll also be frolicking in the snow, if there’s still some around, since snow still feels pretty exotic to this Texan. 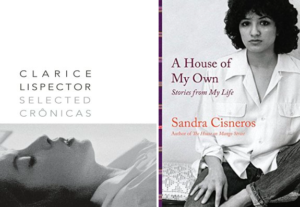 The other weekend in Tampa I was dragged out to a record store in a strip mall which also sold books and found there a copy of Sandra Cisneros’s memoir, A House of My Own. I’ve been reading this thing slowly because I enjoy it so much. Her sensory descriptions are marvels of intensity. She’s brilliant at describing friends and literary influences, like Gwendolyn Brooks or Luis Omar Salinas. And she makes me want to read and write, which is a strange thing to say in a house of books, but that’s a rare thing. So in addition to rereading some of Clarice Lispector’s cronicas—I love that form, not quite journalism, too unthought to be an essay—and continuing to work my way through Kevin Young, who is a living songbook, cookbook, history book and book of love all from one pen, the Cisneros will be floating around me, too. Like a reminder of how unexpected beautiful things are. 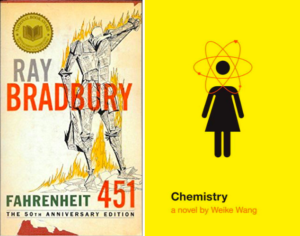 Somehow I made it through adolescence without reading Fahrenheit 451, and since I have a beautiful new Folio Society edition, I’m planning to rectify that omission this weekend. The plot, of course, won’t be a surprise (I wasn’t living under a rock), but I feel it’s only right to read it before watching Michael B. Jordan in the forthcoming HBO film. I finally picked up recent Whiting Award winner Weike

Wang’s Chemistry, which somehow I missed last year but is now out in paperback. Does a character in graduate school count in making the book a campus novel? (One of the Lit Hub office’s favorite topic for discussion is the merits and parameters of “campus novels,” so I’m looking forward to a robust argument on Monday).

Early tomorrow morning I’ll be riding a bright orange charter bus up to Boston for a friend’s karaoke birthday party. I’m bringing Sigrid Nunez’s The Friend with me (because what’s better than a good cry when you’re trapped in a moving vehicle with dozens of strangers), as well as a handful of magazines that I’ve neglected over the past few weeks. Upon returning home, I plan to kick back and chill out with the season finale of my current favorite TV show: High Maintenance.

This weekend I’ll continue watching the new Netflix docuseries Wild, Wild Country—inexplicably produced by mumblecore kings Mark and Jay Duplass—about the massive and controversial Rajneeshpuram commune in northwestern Oregon, which was incorporated as its own city during the early 1980s. The vehemence with which various talking heads on the show deny any similarities between Rajneeshpuram and the Peoples Temple, as well as the fact that the daughter of slain senator Leo Ryan was a member of the commune, has put me in the mood to finally check out Jeff Guinn’s The Road to Jonestown from the library… although there’s a strong possibility I’ll just wind up obsessively reading the Wikipedia pages of various cult leaders for several hours instead.

Like tens of thousands of others, I’ll be hoping the skies are clear for the March for Our Lives protest on Saturday morning. Though I didn’t grow up with A Wrinkle in Time, my wife and our friends are big fans so a few of us will go see the movie together on Sunday and I’ll ask a series of infuriating questions afterwards. I’m also looking forward to starting Rebecca Kauffman’s new novel The Gunners, which has been compared to The Big Chill and St. Elmo’s Fire, so I’m already sold.

I am attending a seven-year-old’s birthday party this weekend at a shoe-optional trampoline emporium (I am invited and will be bringing my own seven-year-old in order to gain entry). Everything else pales next to this prospect, but will include (though is not limited to): binge-watching Deadwood and dipping into Emily Wilson’s widely heralded version of The Odyssey. Wish me luck.

Off the ClockWhat the Lit Hub Staff is Doing This Weekend
Share: 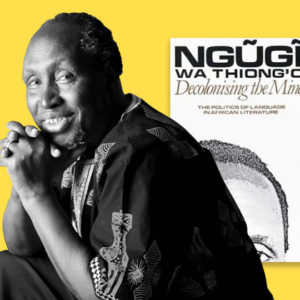 “I wanted to meet Chinua Achebe, the young Nigerian novelist whose two novels, Things Fall Apart and No Longer at Ease,...
© LitHub
Back to top
Loading Comments...