It is a bright cold day in December, and the clocks are striking thirteen. To the past or to the future, to an age when thought is free, from the age of Trump, from the age of Wikileaks, from a dead woman, greetings.

This is to be a column about language, but before I get to that, and why, we’ll need to get a few things straight.

In George Orwell’s 1984, the first act of rebellion undertaken by Winston, the protagonist, is to acquire a blank book and begin to write down his thoughts and memories. He does so despite the glare of a Big Brother poster, and under the watchful eye and keen ear of the two-way telescreen.

I write to you now from my laptop with its two-way listening and seeing devices. I have a smartphone in my bag that does the same thing. I use these instruments to watch and listen and in return people can watch and listen to me. I operate under the impression that it is I who chooses which people can and can’t do this, but we all know it is already legal for that not to be the case.

Are you listening now? Good.

It is not an exaggeration to say that we are witnessing the rise of fascism in America. With the election of a demagogue one month ago, this has moved beyond ideas of liberal or conservative, Republican or Democrat. Something different is happening. We are undergoing an assault on our democratic norms and the freedom of our press, without which a democracy cannot function.

The assertion that Trump is spoiling to rule America as a dictator—an authoritarian, an autocrat, a tyrant—has been made across the political spectrum, from liberal magazine editors to conservative former presidential candidates. In a recent New York Times opinion piece, a Republican elector from Texas likened his refusal to cast his electoral vote for Trump to defending America after 9/11:

Fifteen years ago, as a firefighter, I was part of the response to the Sept. 11 attacks against our nation. That attack and this year’s election may seem unrelated, but for me the relationship becomes clearer every day.

Trump is telling big, consequential lies: that the election he won was not legitimate, that millions of illegal votes were cast, but that the results should stand anyway; that the protestors protesting against him were paid; that the New York Times is losing subscribers; that “the media” is lying; that the president of Taiwan had just called to congratulate him, when in fact the call was set up months ago (an affront to the Chinese government); that flag-burners should be stripped of citizenship. Lies and threats like this, from someone as powerful as Trump is now, aren’t just words. They are language, weaponized.

Aside from Trump’s shock-and-awe untruths, there is also an equally dangerous seep of something else, like poison in the groundwater. Major newspapers are calling white supremacists “dapper.” The Congressional Science Committee is tweeting out stories by climate change deniers. Trump takes advice from a conspiracy theorist who suggested that the copiously documented massacre of small children was faked. A US general and his son, who was given a “.gov” transition team email address, spread a fake story that resulted in an armed man firing shots in a pizza restaurant. A CNN chyron read “are Jews people?” and pundits floated the idea of concentration camps in America on national television, citing Japanese internment as a legal precedent. A Trump surrogate said “there’s no such thing, unfortunately, anymore, as facts.”

This is not a drill. This is fascism and it is here, poised to take over the American government. Trump poses an existential threat to our country. It isn’t alarmist to say these things, it is simply true.

Trump, himself a man with a strikingly limited vocabulary, has launched an assault on the American psyche, and already our linguistic infrastructure is beginning to shift and crumble. Less familiar words have been pushed to the fore, or have taken on new meaning: contrarian, snowflake, gaslighting, normalization, nationalist, rigged, hacked, resist, emolument.

We have been beset with dangerous euphemisms. A neo-nazi becomes “an economic populist.” A lie becomes “a claim.” A propagandist becomes “a maverick” or “a provocateur.” Equality becomes “identity politics.” A public school privatizer becomes “a school reformer.” A climate change denier becomes “a climate contrarian” and a climate scientist “a climate alarmist.” Journalists are being called “presstitutes” or “lügenpress,” which is German for “lying press,” a term adopted by the Third Reich. There has been a kind of doublespeak silencing on social media in which those speaking out against white supremacists are themselves called “racists,” and those pointing out misogyny are called “sexist.” A protestor becomes “an economic terrorist.” White people become “the working class.”

We fight back by correctly labeling; by calling a white supremacist a white supremacist, a fascist a fascist, a sexual assault a sexual assault. We name what is happening or about to happen around us: kleptocracy, kakistocracy, authoritarianism, fraud, corruption, embezzlement. We can creatively add to the taxonomy of tyranny even as we feel ourselves buried alive by it: idiocracy, dystocracy, misogynocracy.

We in America are already being told that two plus two equals five. In time, just like Winston in 1984, we may even come to believe it. Or we may cease to care whether we believe it or not. Under the cover of that uncaring darkness, any number of atrocities may occur.

No one person can defend everything in America that will need defending in the age of Trump. What we must do, instead, is to find our particular hills to defend, and then to defend them as if our freedom depended on it. Even if these battles are lost, the very act of writing down the progression of that loss, as Winston did, is an act of resistance. The hijacking of public language, as is happening now, is a way to shift perception—to bend and control thought—and must be resisted.

I would like to invite readers to join me in doing this. Get a diary or journal and write down as many words as you can that relate to the things that you value. Fascism favors sameness; it represents a desertification of language and thinking. You can fight sameness with diversity. Inside this thought-desert, we must learn to be jungle oases. If you plan to defend nature, write down the names of birds and landscape as a start. Write phoebe, warbler, wren, heron, starling, swift, swallow. Write dale, dell, coppice, coomb, swale, swarth. Let your language soar and spread. Get closer and write root, leaf, stem, stamen, stigma, filament, sepal, pistil, petal. Write down how the world and words around you change.

We all need our hills to defend. As I intend to chronicle in this twice-monthly column, language will be mine. I’ll be here, wielding pen or laptop under the eye of Big Brother, repeating that two plus two equals four. 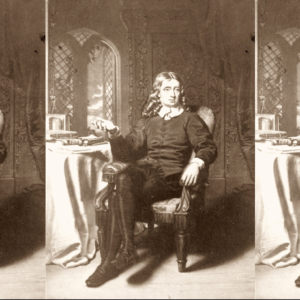 “How did he feel about that, about being inserted into my fiction, revealed as a character who was both recognizably...
© LitHub
Back to top
Loading Comments...