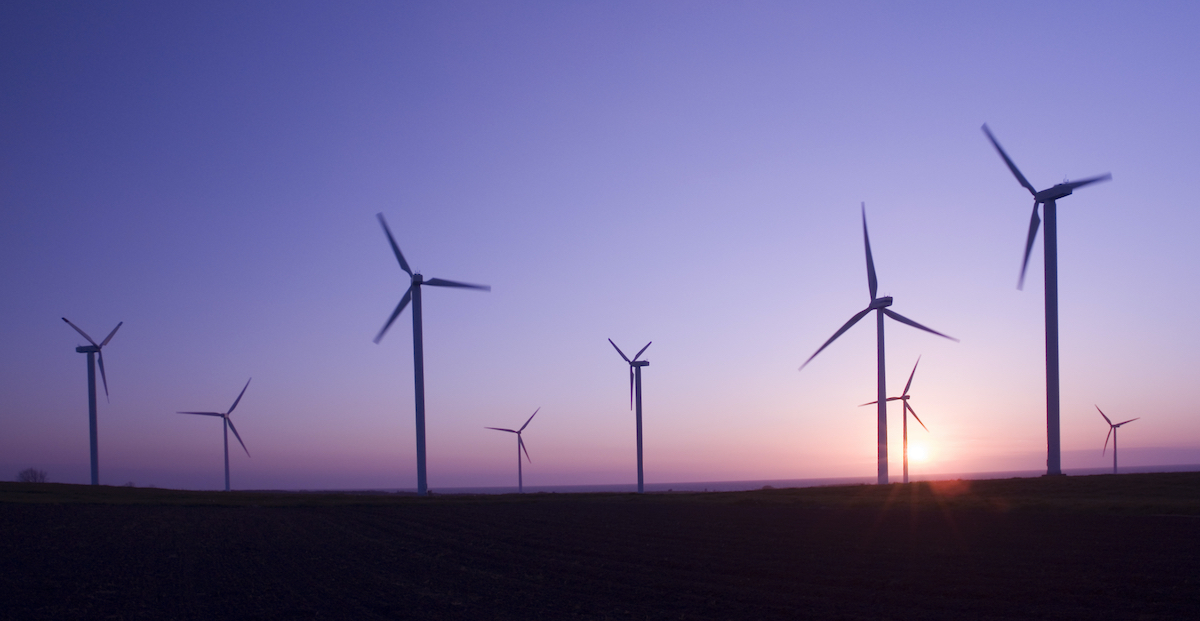 On Labor, Climate, and the Long Way Forward

This essay is based on interviews with Chomsky conducted by C.J. Polychroniou, Amy Goodman, and Harrison Samphir.

History is all too rich in records of horrendous wars, indescribable torture, massacres, and every imaginable abuse of fundamental rights. But the threat of destruction of organized human life in any recognizable or tolerable form—that is entirely new. The environmental crisis under way is indeed unique in human history, and is a true existential crisis. Those alive today will decide the fate of humanity—and the fate of the other species that we are now destroying at a rate not seen for 65 million years, when a huge asteroid hit Earth, ending the age of the dinosaurs and opening the way for some small mammals to evolve to pose a similar threat to life as that earlier asteroid, though differing from it in that we can make a choice.

Meanwhile, the world watches as we proceed toward a catastrophe of unimaginable proportions. We are approaching perilously close to the global temperatures of 120,000 years ago, when sea levels were six to nine meters higher than today. Glaciers are sliding into the sea five times faster than in the 1990s, with over 100 meters of ice thickness lost in some areas due to ocean warming, and current losses doubling every decade. Complete loss of the ice sheets would raise sea levels by about five meters, drowning coastal cities, and with utterly devastating effects elsewhere—the low-lying plains of Bangladesh, for example.

This is only one of the many concerns of those who are paying attention to what is happening before our eyes.

Climate scientists are certainly paying close attention, and issuing dire warnings. “Things are getting worse,” says Petteri Taalas, Secretary General of the World Meteorological organization, which in December 2019 issued its annual global climate report. “It’s more urgent than ever to proceed with mitigation. The only solution is to get rid of fossil fuels in power production, industry and transportation,” he said. Israeli climatologist Baruch Rinkevich captures the general mood succinctly:

After us, the deluge, as the saying goes. People don’t fully understand what we’re talking about here. They think about melting icebergs and polar bears who won’t have a home. They don’t understand that everything is expected to change: the air we breathe, the food we eat, the water we drink, the landscapes we see, the oceans, the seasons, the daily routine, the quality of life. Our children will have to adapt or become extinct. They will have to dress differently, behave differently, live differently. That’s not for me. I’m happy I won’t be here.

Is there a chance to avoid such catastrophes? No doubt. There are well-worked-out and sound proposals, but the task ahead is enormous, and there is not much time. The challenge would be great even if states were committed to overcoming it. Some are. But it is impossible to overlook the fact that the most powerful state in human history is under the leadership of what can only be accurately described as a gang of criminals who are dedicated to racing to the cliff with abandon.

The French gilets jaunes movement has put the problem squarely: The (French) government talks of the end of the world, but we can’t get to the end of the month.

It is hard even to find words to capture the scale of the crimes they are contemplating. A small but telling example is a 500-page environmental assessment produced by President Trump’s National Highway Traffic Safety Administration that calls for canceling new automotive emissions standards. They have a sound argument. The study projects that by the end of the century temperatures will have risen 4 degrees Centigrade. Auto emissions don’t add that much, and since the game is pretty much over, why not have fun while we can—fiddling while the planet burns.

We face a problem that cannot be ignored. The French gilets jaunes movement has put the problem squarely: The (French) government talks of the end of the world, but we can’t get to the end of the month. Transition to renewable energy should create a much more livable environment quite generally, but it will inevitably harm some working people who can ill afford the shock, and careful planning is necessary to deal with these and many other problems. That can be done, and concrete solutions have been suggested.

The Green New Deal moves us in the right direction. You can raise questions about the specific form in which Alexandria Ocasio-Cortez and Ed Markey introduced it. But the general idea is quite right. And there’s very solid work explaining exactly how it could work. For example, a very fine economist at University of Massachusetts, Amherst, Robert Pollin, has written extensively on it, and in extensive detail, with close analysis of how you could implement policies of this kind in a very effective way, which would actually make a better society. It wouldn’t be that you’d lose from it; you’d gain from it.

The costs of renewable energy are declining very sharply. If you eliminate the massive subsidies that are given to fossil fuels, renewable energy is probably already more cost-effective. There are many means that can be implemented and carried out to mitigate, maybe to overcome, this serious crisis. So the basic idea of the GND is, I think, completely defensible—in fact, essential.

“Let’s start the factory by running it by ourselves. We don’t need the bosses. We can run it ourselves. So, get rid of them. Ok?”

Well, what’s the difference between the Green New Deal of today and the New Deal from the 1930s? Several things. One thing that’s different is large-scale labor action. The 1930s were the period of the organization of the CIO (Congress for Industrial Organization). In the 1920s, the US labor movement had been virtually destroyed. Remember, this is very much a business-run society. American labor history is very violent, quite unlike comparable countries. And by the 1920s, the quite effective, militant labor movement had been pretty much crushed. One of the great works of labor history is called The Fall of the House of Labor: The Workplace, the State, and American Labor activism, 1865-1925, written by David Montgomery, one of the great labor historians. Montgomery was talking about the 1920s, when labor activism had essentially been destroyed. During the 1930s, it revived.

The second element was there was a sympathetic administration, which is very critical. In his book A History of America in Ten Strikes, an account of the militant labor actions since the early 19th century, Erik Loomis makes an interesting point. He says every successful labor action has had at least tacit support of the government. When the government and the ownership classes have unified in crushing labor action, they’ve always succeeded. This is a very significant observation.

And in the 1930s, there was a sympathetic administration, for many reasons. But that combination of militant labor action and a sympathetic administration did lead to the New Deal, which greatly changed  people’s lives. Today, we know there are barriers that have to be overcome. We have to find ways to shape the message, in words and actions, so as to overcome the barriers. The message is two-fold: First, we’re facing an existential crisis that must be dealt with quickly; and second, there are ways to overcome it.

The first part is expressed simply enough in current articles in the most prestigious and reliable journals. Oxford professor of physics Raymond Pierrehumbert, a lead author of the recent report from the IPCC (Intergovernmental Panel on Climate Change), opens his review of existing circumstances and options by writing: “Let’s get this on the table right away, without mincing words. With regard to the climate crisis, yes, it’s time to panic. We are in deep trouble.” He then lays out the details carefully and scrupulously, reviewing the possible technical fixes and their very serious problems, concluding, “There’s no plan B.” We must move to zero net carbon emissions, and fast.

Moving to zero net carbon emissions, and fast, is the point of Stan Cox’s important new study, The Green New Deal and Beyond. Cox advocates on behalf of the GND as one step of several we need to take to stabilize the planet. But as Cox and others point out, the GND does not challenge the fossil-fuel industry. In fact, the term “fossil fuels” appears nowhere in the Congressional GND resolutions, and the GND think tanks are not stressing the elimination of fossil fuels. Cox suggests policies that would free us from fossil fuel use before it’s too late. He also suggests doing so in a manner that breaks the patterns of social, racial, and environmental injustice that have been historically inseparable from the forms of economic injustice that have destabilized the planet’s ecosystem.

There are also fundamental issues of value: What is a decent life? Should the master-servant relation be tolerated? Should one’s goals really be maximization of commodities—Veblen’s “conspicuous consumption”? Surely there are higher and more fulfilling aspirations. The dramatic actions of such groups as Extinction Rebellion, the Sunrise Movement, and School Strike for Climate are of great value in opening minds—but those minds have to be engaged in unremitting action to implement changes on the ground, to pass legislation like the Green New Deal, to educate and organize to move beyond it to phase out fossil fuels by a clear and definitive date.

The task will not be easy. It must be undertaken, urgently. 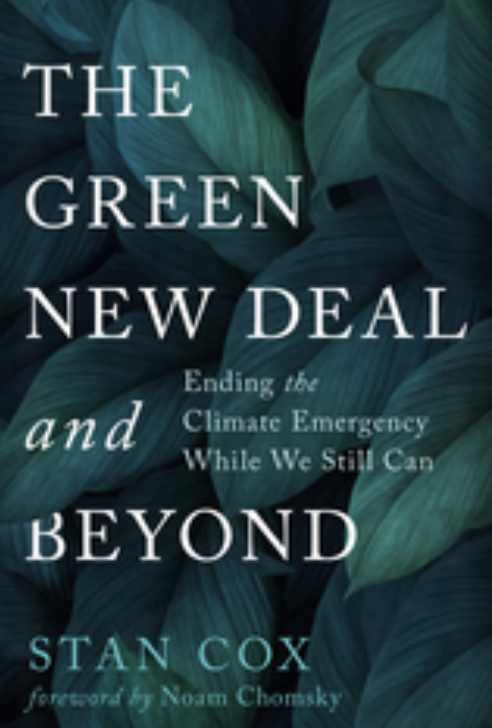 From the foreword to Stan Cox’s The Green New Deal and Beyond, courtesy City Lights Books. Copyright 2020, Stan Cox.

Noam Chomsky is also one of the most influential public intellectuals in the world. He has written more than 100 books, his most recent being Requiem for the American Dream: The 10 Principles of Concentration of Wealth & Power. 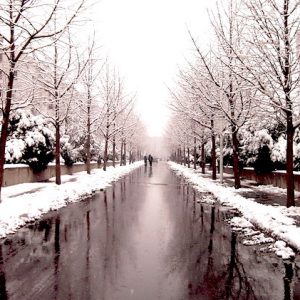 My dream last night began with me standing on a platform waiting for a train. It was at a station that, as far as I know,...
© LitHub
Back to top
Loading Comments...