Naples, The Reading List: Your Guide to the City of Elena Ferrante

On the Eve of San Gennaro, 15 Books to Satisfy Your Neapolitan Cravings

These days, plenty of people know Elena Ferrante, but not so many have heard of Januarius, patron saint of her native Naples. New Yorkers will recognize the Italian name, San Gennaro, from his festival in Little Italy, the last Saturday in April (tomorrow). Yet over by the Tyrrhenian Sea, this 4th-century martyr may have a greater physical presence than Ferrante herself.

Back when Gennaro’s head was still tumbling away from its body, the story goes, some acolyte stooped to collect vials of his blood. The reliquaries are kept in Naples, and twice a year, the Duomo is packed for the miracle of liquefaction. The more freely the stuff flows, in its gilded containers, the more it buoys up the prayers of the locals, the Napoli D.O.C. Better yet, they get two chances at a miracle, one in September and one late in April.

At some point Ferrante—then still using her actual name—must’ve been among the believers. These days she may no longer live in town, but the city remains an abiding subject for her, integral to her power. So too, as her quartet follows Lenù and Lila around Naples, as it steeps in the beauties and toxins, it generates hunger for more. Readers can take Ferrante tours, now, and they’ve begun seeking other books written in the shadow of Vesuvius.

Piacere mio, my pleasure. I’ll limit my suggestions to titles available in English and pertinent to the novelist’s generation.

Of course, the former Neapolis goes back many generations further. A rough figure for the age of the downtown would be 3,000 years, and the stay-at-home Lila ends up a walking encyclopedia of the old centro. Still, no history so shapes her and Lenù as the Second World War. Coevals born in 1944, they get their first inklings of adult pain from stories of the conflict. Everyone else needs to see a memoir by the Englishman Norman Lewis, Naples: ’44, (1978), and two novels: The Skin, by the Italian Curzio Malaparte (US edition 2013), and The Gallery, by the American John Horne Burns (1947).

While Lewis and Malaparte saw combat, after the ’43 liberation of Naples all three remained in the rear, gathering information for the OSS. The books out of their experience burn with indignation at the “war effort,” its greed and venality, while also raising a praise-song for the city and its resilience. In Skin, though, the better music emerges only as a counterpoint to brilliant black comedy. The novel has been compared to Catch-22, but Heller feels Rabelaisian, Malaparte Hobbesian: nasty, brutish, and short. American readers waited 60 years for an unexpurgated translation, and its wildest absurdities concern an American Colonel. This “Christian gentleman” thinks he can help the benighted Neapolitans shed “their sins,” but who’s the sinner when the officer’s served a “mermaid” for dinner—a dead girl on a platter?

Women suffered the worst, in this war as in most, and their plight also bears on Lewis’s memoir and Burns’s novel. Both withhold judgment from women driven to prostitution, and close with tragic attempts at decency. Lewis also shows us an eruption of Vesuvius and the resulting frenzy over the miracle of San Gennaro, the city’s heritage matters more in Naples ’44 than in the other war books, but the author’s diary entries keep us in the moment. Regarding the Camorra, he shows us usury more vicious than anything in Ferrante. Nonetheless, Lewis leaves Naples enchanted by its “humanity and culture”—as does Burns. Though almost as hard on his commanders as Malaparte, the American brings off a triumph of sympathetic imagination. The Gallery takes us through a gallery, languishing in the infirmary with a black GI who’s caught gonorrhea and, in its celebrated “Momma” chapter, drinking through the evening with gay men in uniform. Burns’s own predilection (a tormented closet case, he died young), in no way diminishes his emotional reach. In a ravaged city “alive and furious,” he discerns the future Saigon or Baghdad: “All we actually did was to knock the hell out of their system and give them nothing to put in its place.”

The books above, however, are all by men. In the quartet, feminism works like an involuntary muscle, now pumping up the intensity, now forging compromise, and Ferrante cites two women as her primary inspiration. Virginia Woolf is one, the other a writer linked inextricably with the battered Italian South, Elsa Morante. To Ferrante this sister-in-arms seems, as she told the New York Times, “unsurpassable.”

Morante achieved international success with History (1974), and this too is a novel of the war in Italy. It draws on the author’s time hiding out between Naples and Rome, in hill towns scarred by battle, and like the quartet it unfolds with Sophoclean inevitability. The savagery includes a child conceived by rape and cattle-cars full of Jews, and if the trauma finds any relief, it’s in the touches of magic, such as a child’s conversation with his dog, and in the author herself. A single voice carries across the ruins, surmounting the “dynamics” of “power to some, servitude to others;” like Lenù, she alone is escaped to tell thee.

Morante was never so prolific as her famous fan, and Americans can sample only one other novel, Arturo’s Island (1998). Half the length of History, its confines mostly to an island off Naples (not the jet-setter’s Capri). There, Arturo grows up isolated and besotted: first with heroes of legend, then with his father’s new wife. She’s only a girl herself, 17—another Italian woman negotiating a life—and here as in the war novel, fate comes down hard. Still, overall the feeling’s lighter, fabulist. Only a remarkable artist could bring off two such stories, poles apart.

Another fellow traveler would be Anna Maria Ortese. Herself Napoli D.O.C, Ortese too paints the city broad-brush, covering the whole social spectrum. In Europe she enjoys wide readership, but Americans have to dig. Worth the effort, especially, are her own war stories, edited by the young Italo Calvino and a prizewinner in 1953. Two years later a London house brought out the set as The Bay Is Not Naples, and online you’ll find scans and hardcovers, the latter at Camorra prices. Easier to track down is The Iguana (1988), a fine enchantment, cavalier in how it toys with Shakespeare’s Tempest. Like Morante’s Arturo, the more playful Ortese reminds us that, while the quartet tends to the grim, its lives too enjoy their miracles. A manuscript Lenù abandoned proves her greatest success.

As for sisters elsewhere, the two closest are the American Anna Cornelison, principally a sociologist, and Shirley Hazzard, best-known for her novels. From the former we get Women of the Shadows (1976), a series of portraits as in The Gallery, but depicting actual “wives and mothers of Southern Italy.” These are country women, but their hardscrabble has plenty in common with that of Lila and Lenù, and Cornelison maintains a novelist’s close focus. Unsparing, she declares, “there is no gay camaraderie in this poverty,” but she achieves empathy so powerful that, over the decades since my mother first handed me Shadows, Ferrante may be the only artist to have broken my heart in quite the same way.

As for Hazzard, Australian-born, she’s lived a long time in the city and published a set of “Dispatches from Naples.” That book and others have a lot to recommend them, but for this list the most fitting is The Bay of Noon (1970). The title references an Italian term for the South, the Mezzogiorno, and the setting’s Naples. More intriguing is the novel’s concern not with the last War but with the boom that followed—the new-money giddiness that fuels La Dolce Vita. Indeed, Fellini or someone like him has a role in Bay, as one of several seductions the city proffers Hazzard’s protagonist. New in town, the woman’s not unmoved, and the affairs that follow don’t merely toughen her; they illuminate an entire complicated culture that may, ultimately, “show us how we came.”

Others crowd the mind, among them Susan Sontag, whose Volcano Lover (1992) took her back to writing novels by way of Naples, and Eduardo De Filippo, whose These Damned Ghosts (1999) made it recently to Broadway. Also there’s Thomas Belmonte, still a Columbia grad student when he wrote The Broken Fountain (1979), his dissertation on impoverished Neapolitans; the similarities to the quartet are eerie. I think too of the city’s latest crisis, the flood of refugees out of Africa and the Middle East. Those convulsions have yet to find their novelist (though Tahar ben Jelloun has a brief Naples book, in Italian only).

For Ferrante, though, two locals make better final companions. The first is Erri de Luca, roughly the same age, with upwards of 60 books to his name. A number have captured awards in Europe, and his common mode is the short novel of a boy’s initiation. One de Luca after another tests a young Neapolitan against the rigors of first love. The peril of cliché looms, to be sure, but the five or six I’ve read avoid it by wholehearted immersion in the adolescent dream state. The ancient seaport, enhanced by hormonal surges, is restored to its original paradoxes, at once the most beautiful city and the worst corrupted. The same extremes tug at Ferrante’s novels, and among de Luca’s, my suggestion would be The Day Before Happiness (2011). The tales a boy hears of the War’s Resistance fighters, in Day, help him handle the Camorra.

The Neapolitan Mafia also provides the subject for Gomorrah (2008), by Roberto Saviano. Though journalism, the book is the only one on this list to rival the impact of the quartet, and though Saviano lacks Ferrante’s formal command, at times clumsy as he shifts from recollection to reportage—eh, we should all be so clumsy. So harrowing is this “personal journey” through the depredations of “the System,” so unforgettably does it detail those abuses, its writer lives now in hiding, under guard. Gomorrah moves any conscientious reader to think twice, three times, about the deeper costs behind a bargain on the street.

Saviano himself comes from the street, the Secondigliano neighborhood, an area not unlike Ferrante’s “Vasto” (also known as Luzzati). Indeed any Naples visitor can stumble into either, outside tourist comfort zones. It’s as easy as taking the wrong exit into south-central L.A. Still, Compton has its success stories, as does Secondigliano. I have family there, law-abiding folks who’d prefer not to uproot, to cut all ties. That tension over whether to leave or stay—the question: where’s the good life?—sustains the entire quartet, and has everything to do with its worldwide appeal. In an era Salman Rushdie called a “century of wandering,” whether the cause was war, climate, or corporate relocation, few things are so fascinating as city ways that outlast catastrophe, preserved like the relic of a saint.

John Domini has often written about Naples, including three novels, and has just completed a memoir. In June he’ll publish a new set of stories, MOVIEOLA!

John Domini has contributed several times to Lit Hub. His latest book is the memoir, The Archeology of a Good Ragù. 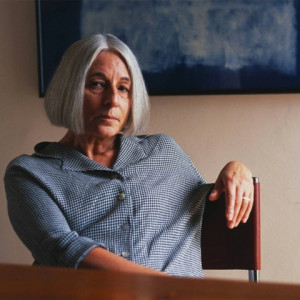 I have to call her @diski because that’s how we met, on Twitter. She was not one of those many writers who despise the medium,...
© LitHub
Back to top