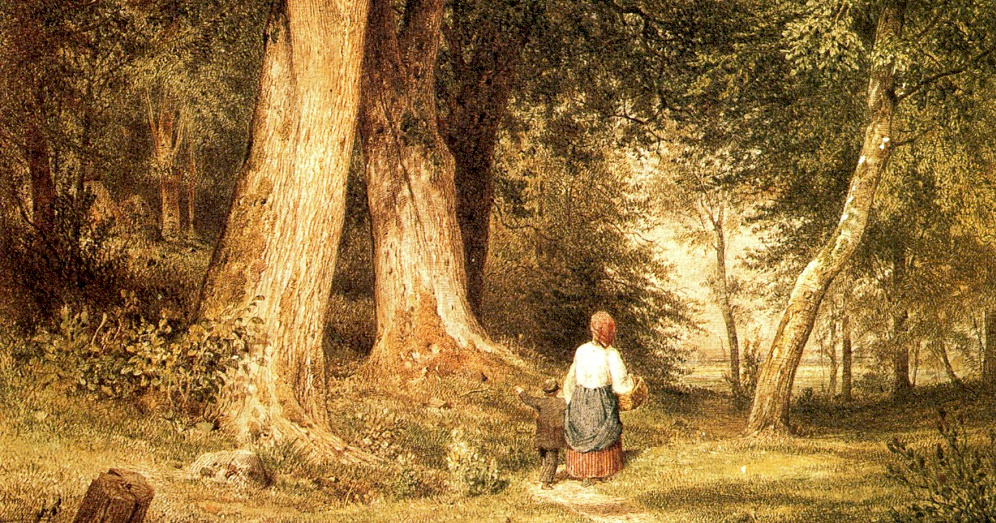 I raise my glass to my eldest son. His pregnant wife and their daughter are sleeping above us. Outside, the March night is cold and clear. To life! I say as the glasses clink with a delicate and pleasing sound. My mother says something to the dog. Then the phone rings. We don’t answer it.

Who could be calling so late on a Saturday evening?

He had his green jacket on. I know because I saw it myself. He walked in the green forest, and beside him walked a tiger. He walked in the green forest, and he looked up at the leaves. I see that the light shimmers in his hair, which is the same color as the tiger’s pelt. He walks alone. He doesn’t understand why he’s alone. But he has his tiger. He had his tiger. He lays his hand on its strong back, and I see that he’s untroubled. Now the road turns, he disappears around the bend, the path leads him deeper and deeper into the green forest. He was untroubled. He didn’t know why he was alone. Beside him walked a tiger.

Once, I was pregnant and I dreamed that the child inside me was a baby tiger. Playful, soft, and cuddly with light brown eyes and a golden pelt.

That’s how you looked when you were born.

You were delivered by C-section, and I got sick after the birth. I had the most excruciating migraine, and the staff in the maternity ward thought I was hysterical. I cried and complained.

I could hardly contain myself. I could hardly take care of you. I fainted as I was rolling you down the hall in the see-through plastic bassinet. That’s when they called in a nurse who was also a healer. I felt it when she sent a gush of warm energy toward me.

That’s what it felt like. But it didn’t help. Finally they sent me down to a physiologist. He said air bubbles had entered into my spinal cord because the epidural was not put in right. He turned me upside down and manipulated my limbs and back. They cracked and popped. I felt like an animal in a slaughterhouse. I was simply bones and meat. The headache went away and they sent me home. This was at the National Hospital in Copenhagen. It was freezing out and I was afraid you wouldn’t be able to stand the cold. At home, you and your father fell asleep. I sat alone in the tiny kitchen. It was evening, dark.

I got dressed and went out for cigarettes. “I’m a human being,” I thought. “Now I’m myself again, alone in my body.” Standing in the corner store I thought about how the cashier couldn’t tell that I’d just had a child. It was my secret and it delighted me. You were my secret. I was 25 years old. I smiled at the cashier and went home through the snow-lit streets.

So excited to see him

Outside, the March night is cold and clear

I cannot form a sentence

My language is all dried up

I raise my glass to my eldest son. His pregnant wife and their daughter are sleeping above us. The girl is exactly three years old. Outside, the March night is cold and clear. We’ve been together all day. We’ve been walking in the forest and playing with the little one. She said many wonderful things, and had lots of fun. We’ve talked about everything imaginable, and now we’re sitting at the round table in my mother’s living room. To life! I say as the glasses clink. We’ve eaten, and now we’re drinking wine, we’re talking about my next eldest son: How he didn’t get into the Danish Film School, although he made it to the final interview. That was a big accomplishment. How he seems to be getting over the disappointment, and will apply again next year. How he’s still enjoying his work as a chef. How he spends most of his free time editing films. How we miss him. I say: I miss him. Too bad he couldn’t be with us tonight. But I can’t wait to see him tomorrow, I say. The dog barks. I talk about my youngest son. We laugh at something. My mother tells the dog to be quiet. The phone rings. We don’t answer it. Who could  be calling so late on a Saturday evening?

Lilies of the valley, white roses.
The earth, black and damp.
The glass bells’ delicate clinking to
night, to

I have four sons.

Do you have four sons?

I nursed you and you ate heartily

You have a name

We ﬁrst settled on Emil only, but you were so broad-shouldered and strong that it didn’t seem sufficient.

Your older brother’s youngest daughter is named after you: Emilie.

She doesn’t call much attention to herself and:

Your smile is unforgettable (a beautiful shape):

You are part of your older brother’s daughter:

We are part of each other.

Are you part of me?

November 8th, 1994
Carl Emil has become calmer and more in harmony, and he is unusually absorbed with drawing, painting, making masks, playing with modeling clay, etc. Writes letters and words, and has begun adding numbers and saving money. He has friends and is hardly as shy or taciturn as he was two years ago. A passionate boy, who still loves his paciﬁer, a kiss, and his bed.

I kissed your hand and your hand was so cold that the coldness crept up into my face, my head, my skull. Nothing colder exists in the world. Not ice, snow. No fear, no anxiety, no heartbreak as cold as your hand; your hand, which I kissed with my warm living mouth.

I said: Little friend.
You were twenty-ﬁve years old.
It was in March 2015.

It was
It was

Your young body in the coffin
The earth, black and damp

So strange that you don’t exist, I still feel you

My body still can’t understand that you don’t exist

December 4th, 1989
The little one has arrived! A ﬁne little one. He sucks and sleeps and is still just a small animal. I can sense that he has a powerful personality in his own quiet way. He only cries (very seldom), if there’s REALLY a reason for it, and then he lets you know—it resounds. But he also makes the sweetest tiny sounds as if he were singing.

You exuded a warmth that fascinated people. you exuded a sensual warmth.

You didn’t have much anger in you.

There was something about you that I don’t have words for.
Something transparent, that made you suffer alone, in silence.

And when you cried over love, you really suffered.

You didn’t call much attention to yourself

I have formed a beautiful observer: you. 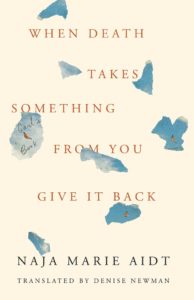 Excerpted from When Death Takes Something From You Give It Back. Used with the permission of the publisher, Coffee House Press. Copyright © 2019 by Naja Marie Aidt. Translation copyright © 2019 by Denise Newman.

Coffee House PressdeathgrieflossNaja Marie AidtWhen Death Takes Something From You Give It Back
Share:

Naja Marie Aidt was born in Greenland and raised in Copenhagen. She is the author of eleven collections of poetry, a novel, and three short story collections, including Baboon, which won the 2008 Nordic Council Literature Prize, Scandinavia’s highest literary honor. Her work has been translated into sixteen languages. 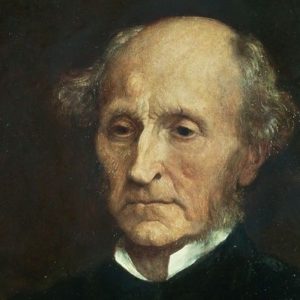 In this episode of Keen On, Andrew talks to Richard Reeves, author of Dream Hoarders, co-director of the Center on Children...
© LitHub
Back to top