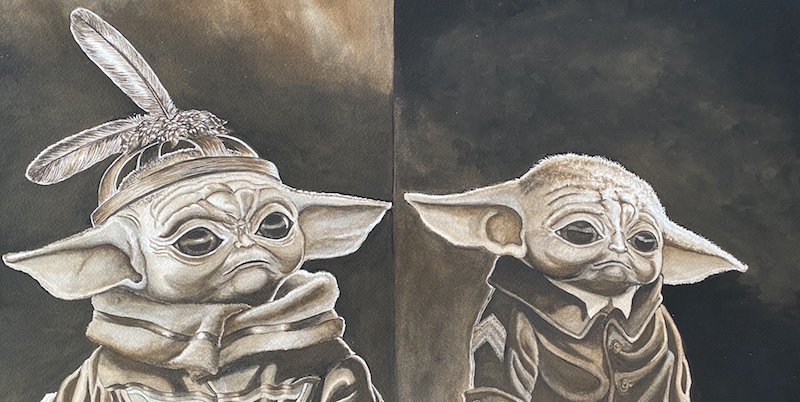 In Which Eric Gansworth Possibly Spoils The Mandalorian

Note: This reflection originated in a February, 2020 panel discussion, just before the world began its most recent seismic shifts. It seems impossible that The Mandalorian and Baby Yoda were trending topics. Maybe they never were, universally, instead thriving in my indige-nerd alley of pop culture. It also seems impossible that large family gatherings, for now, are over. My great great niece’s birthday was the weekend before this panel. The unexpected funeral of a cousin I’d grown up with occurred two days after. These would be the last large family gatherings I’d attend for the foreseeable future.

I find social media a powerful but fraught force, and I don’t have skills to render my concerns in 140 characters or even 280. It should be good practice for a poet. During this country’s most complex race relations in my lifetime, I can’t help but consider my grandparents’ Indian Boarding School experience. It was designed to erase their identities, and I deeply appreciate everything they did to ensure our continuance. People talk about the boarding schools as if they existed in a long past history. My grandmother lived until I was 19 years old, long enough for me to know about her experiences and later understand their impact on my family’s ongoing generations. This is personal reflection, not ancient history.

I understand social media benefits, but prefer life as an “Anti-Social Media” guy. Goofing on cultural violations, I imagine making some absurd Twitter pronouncement like “I hate babies” and suddenly be screen-capped out-of-existence, renamed “I Hate Babies” Gansworth. It’s better to keep preposterous provocations in the live ether, where their ridiculous tone is obvious, than cloud-documented out of context, like undetonated landmines. Raised at Tuscarora Nation, “the Rez,” a tight community of a thousand people, I am a social person. My immediate family, siblings, their kids, and their kids, is maybe 70 people. Cousins put us over 300. Literally, everyone knows everyone. There’s no such thing as a small family gathering. Gathering is what we do.

Indigenous peoples here belong to hundreds of nations, cultures, finding each other in our one shared connection: genocide. The federal government’s attempt to strike us down in the 20th century, to destroy our cultures, only made us more powerful than it could possibly imagine. Indian children were removed from homes, sent to boarding schools, had their names changed, were told their beliefs were witchcraft, were forced to speak only English and trained to be manual laborers, serving others. Still, three of my grandparents found each other and found their way home, survivors, so we could carry on.

From them, we learned to use available tools to reconnect. Several generations later, my family prefers social media. Even members who hate technology have Twitter accounts and they share. Because traditional Indian arts rely on the supply and demand of in-person sales, our forms often include fresh subjects. Nephews send me links to Pacific Northwest superheroes and Star Wars, dubbed into Dine (Navajo). If Tuscarora or Onondaga did this, I’d be all over the effort. I’ve memorized an inappropriate percentage of Star Wars dialogue, and I spoke Tuscarora decently as a kid. The infrastructure is there in my head. I have a kid’s love for Star Wars, less embarrassed than a lot of middle-aged men. I’ve owned a beaded Batman belt-buckle for over half my life. The adult half.

How could we not understand this story of a baby stripped of its name, discovering its own tenacity, talents and unexpected allies as a version of our own stories?

Star Wars is a lens Indians have readily adopted. I love the weird visual pun of a white Rez Dog rocking an orange Stormtrooper pauldron. I also understand the brilliance of the Dine language dub. We recently lost our last Tuscarora continuous fluent speaker, in his nineties. Younger people long studied with him, but now that door is closed. We understand Princess Leia seeking Obi-Wan Kenobi. Her Only Hope was an elder’s endurance. Now that ours is gone, our language fragments float in space like Alderaan, destroyed by the Empire’s weapon, the oo-nih-SEH`rheh Gih-heh. Is it too late to reassemble and master those fragments? If someone started scrolling through my phone pics, could I tell them in Tuscarora that it’s not the droid they’re looking for? Could we laugh?

I love that Twitter doesn’t require an account. Lurking, I stumbled upon #NativeTwitter. Like many Rez gatherings, it has undercurrents of just deadly grousing and gossip, sick burns and sometimes out and out raw belligerence and trolling people who should know better. But as often, it’s an auger for indigenous sweet spots. I’ve regularly seen beginning beadwork artists ask for and receive help. It gives me hope, but not enough to create an account. I know my limitations, or some of them, anyway.

I’m not impervious to “cute.” I don’t hate babies—you know, they’re babies—but I am profoundly indifferent to them in ways that baffle new parents. They always think: “Maybe the next pic will change his heart,” and they’re always disappointed. Now, if you have a cat, I’ll seek it immediately, but it’s always a hard pass on “hold the baby” invitations. I like cats’ independence and survival spirit. Those qualities speak to me. And yet, I found myself inexplicably enamored with The Mandalorian’s “Baby Yoda.”

The first meme I saw had Baby Yoda playing A Tribe Called Red’s “Electric Pow Wow Drum” on the Mandalorian’s cockpit radio. The Disney Empire shut down early memes, but since most of America thinks we’re extinct, Indigenous Peoples (and our Twitter feeds) are often invisible. Unchecked, Baby Yoda memes exploded on #NativeTwitter, in and on beadwork, in and on cradleboards, in baskets, in paintings. Indian artists constantly transform pop culture, but the response to Baby Yoda was immediate and, well, Forceful.

When I finally watched The Mandalorian, I understood Indian Country’s adoption. So far, Baby Yoda has been removed from its culture of purported sorcerers. Appearing mute, maybe it just doesn’t speak its captors’ language. The Mandalorian takes it from one captor, and delivers it for bounty, to another “Client,” the way some boarding school students became school agents. In a moment of conscience, Mando rescues Baby Yoda, changing both of their lives.

Along the way, they find an ally from Alderaan, whose world was wiped out by the Empire. It’s revealed that Mandalorians are a culture instead of a race, and that this Mandalorian was himself separated from family by force as a child. He discovers, finally, that he isn’t the child’s savior when it, several times, silently saves him. By the end, they become a clan of two. Even beyond the story’s scope, Disney wants to insist this character is namelessly branded “The Child,” refusing to use “Baby Yoda,” or any other name.

How many of our ancestors dreamed of such resourceful allies? How many found one? How could we not understand this story of a baby stripped of its name, discovering its own tenacity, talents and unexpected allies as a version of our own stories?

I admit, Baby Yoda acts like an actual baby, and I still love it. But Baby Yoda is pretty cat-like, too, in that its stealthy. Maybe adopting these bridges are the keys to survival.

Maybe this is the way.

Note on “The Child” image above: One of the most notorious support strategies done to promote the effectiveness of Carlisle was a series of Before and After images taken by a portrait photographer kept on retainer. He would photograph charges, as they’d arrived, in their traditional clothes and then, a year or two later, photograph them again, “civilized,” in their Carlisle uniforms. The photos would be displayed side by side, as proof of success. For this Baby Yoda contribution, I gave the left one traditional Haudenosaunee clothes. The one on the right is dressed in the outfit my grandfather’s brother was photographed in, during his time at Carlisle.

Eric Gansworth, Sˑha-weñ na-saeˀ, (Eel Clan) is an enrolled Onondaga writer and visual artist, raised at the Tuscarora Nation. Lowery Writer-in-Residence at Canisius College, his books include Extra Indians (American Book Award), Mending Skins(PEN Oakland Award), and Apple (Skin to the Core), Longlisted for the National Book Award, and included in Time Magazine’s 10 Best YA and Children’s Books for 2020, and NPR’s Book Concierge. Portrait by Dellas. 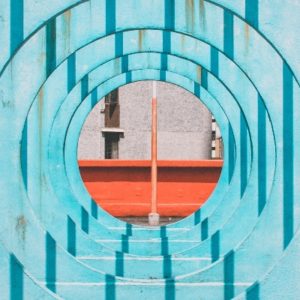 Six book critics walked into a Zoom happy hour to discuss "autofiction." All had read a recent essay by the novelist Tope...
© LitHub
Back to top