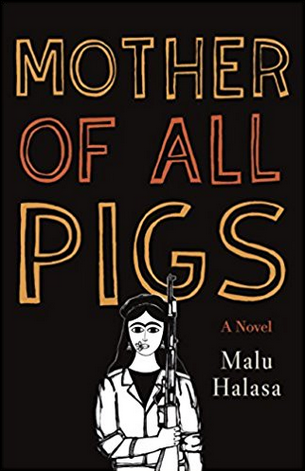 The following is from Malu Halasa’s novel, Mother of All Pigs. Enchanting & fearless, Halasa's prose intertwines the lives of three generations of women as they navigate the often stifling, sometimes absurd realities of everyday life in the Middle East. Malu Halasa is a Jordanian Filipina American writer and editor based in London. Her books include: Syria Speaks: Art & Culture from the Frontline, Transit Tehran: Young Iran & Its Inspirations & more.

No matter how often the businesses on either side of the butcher shop have been painted, the cracking asphalt, gravel, dirt, and garbage give the cramped parade of single-story buildings a uniformly grubby appearance. From his stool behind the counter, Hussein gazes onto the street. With the busiest period of his day over, he’s glad to be sitting down. In the morning, the wives of farmers and tradesmen who prepare substantial mid-afternoon meals come in early, and the cheaper meat sells quickly. They are an unpretentious bunch, loud and chatty. When he first started the job, Hussein exhibited the suspicion of a man who spent a limited amount of time among women. The army had not prepared him for his female customers’ ribald jokes and vigorous haggling; but in time they wore down his natural reticence.

As he got to know them better, the women confided in him and he kept abreast of anniversaries, engagements, and baptisms, any occasion that could bring additional revenue to the shop. He also found himself becoming more sympathetic to the needs of the community and charged less or sometimes not at all. “He has a sixth sense,” remarked the poorer women of the town.

But Hussein has no special talent for divination. He guesses rising or falling family fortunes from individual purchases and offers assistance if necessary. In this he resembles his father, except that he gives freely without sermons or proverbs. More important, he assists the less fortunate without starving his own.

He is about to reach for a cigarette when the arrival of a veiled woman outside the store stops him. Hussein knows she is still deciding on whether to come in and won’t do so until he’s alone, so he orders Khaled to leave his comic book and clean the yard. Still, the woman hesitates outside. Rising from the stool, Hussein goes to the door.

She is not a regular customer. Many Muslim women use the butcher’s, and although they are veiled and say little, he recognizes them, sometimes by a piece of jewelry or simply by the way they drape their robes. From her manner, the woman is clearly nervous. Among the stricter Muslim families it is customary for the men to do the shopping. Religious rules, however, rarely apply to the poor, widowed, or abandoned. Hussein doesn’t bother with which category the woman belongs to. The scarf obscuring her face doesn’t disguise her need. She motions at the joint that she would like to purchase.

When he gives her the parcel she pays in piastres, which he doesn’t bother to count. “This is too much,” he says, and deposits most of it back into a hesitantly outstretched palm. He would have charged nothing, but then she, beholden to him, would never return to the shop. In this way embarrassment is avoided and a way left open.

The woman speaks in a near whisper, “Shukran jazeelan. Thank you very much.” A feeling of sadness lingers in the shop after her departure.

Hussein sighs. He relies on his Fridays to be smooth and uneventful before a hectic weekend of selling pork. But today hasn’t been like any other. With Khaled in the back, Hussein thinks about the jar, but the sound of the bell jerks his hand away and he wipes the counter instead.

A friend, Nabil, steps inside. He is around Hussein’s age and works on one of the larger farms that grow herbs for Western supermarkets. At one time many of the men in the town would have stopped at the butcher’s on their way home from praying at the mosque. Their numbers have all but dwindled except for Nabil, who regularly visits. Hussein doesn’t feel like smiling, but for Nabil’s sake he makes an effort. “Come in, come in.”

“Word travels fast. Teenagers get excited,” Nabil says, and takes a cigarette from the pack Hussein proffers. “And there are fanatics among us, asking questions. This morning’s khutbah was particularly vitriolic. The sheikh is again calling for the town to be cleansed of un-Islamic elements. Although you were not personally named, many people thought of you.”

After the two men light their cigarettes, Nabil speaks first: “They say the meat is succulent. Have you tasted it?”

“It’s similar to human flesh.” Hussein is deadpan, then grins. “To be honest, I’ve not tried it.”

Hussein feels ashamed. He shouldn’t have tried to fool a friend and weighs more than a half kilo of chopped meat and refuses to accept any extra payment from Nabil. The two men argue back and forth, Nabil insisting and Hussein pushing money away. The laborer finally acquiesces when Hussein says, “Because you are my friend.”

“And as your friend I tell you, Hussein Sabas, today might be your last chance to listen. I don’t know what’s planned but I thought I should warn you.”

Hussein feigns indifference as he shakes Nabil’s hand and says, “Tomorrow’s another day.” After Nabil leaves, he suddenly becomes aware of the smell of meat emanating from the corners of the butcher shop, unremarkable in every respect, but tomorrow it will be transformed into a specialty deli—all because of a single pig. Gone are the days when a few pork cutlets were sold discreetly from under the counter. Now orders are filled, hams wrapped, and sausages stuffed for the weekend. Much of the work that he and Ahmad and his sons accomplish at the farm is done almost mechanically, with little physical and emotional effort on Hussein’s part. It is the passions running high in the town he finds difficult and draining. He sinks back down on his stool and stares at his hands and then at the floor.

The discordant jangling of the shop bell rouses Hussein from his torpor. His first reaction is to tell the sheikh and three of his followers that they’ve come to the wrong premises; he never sells pork on Friday. However, the old sheikh’s steely countenance kills the whimper of sarcasm in his throat. The man refuses to look Hussein in the eye and speaks loudly, forcefully, as though preaching to a multitude.

“It is time for you to consider the effects of your sins.” His booming voice shakes the narrow confines of the butcher shop. “Every one of them moves us further from the greatness that should be ours. Instead of walking the path of righteousness, we are victims of your decadence. Don’t confuse material advancement with moral good. I tell you now, what you are doing threatens our survival and yours.”

He raises his walking stick to prevent interruptions, but it’s not necessary. Hussein couldn’t have spoken even if he wanted to. Despite the sheikh’s robes and scowling companions, he is struck by the similarity between the religious leader and his father. Certainly Al Jid was rarely bombastic. But the sheikh’s arrogance, the bullying of Hussein, makes the two men similar. Hussein intuitively knows that like his father, the sheikh believes that with the passing of the prophets, ordinary men can no longer be innocent bystanders in their own fate, reliant on soothsayers, gypsies, and fakirs. Abandoned on the earth, alone by themselves, they must act as agents of God’s righteousness, with every individual having a duty of faith and conscience, and if they failed, there would be inescapable ramifications—eternal and earthly.

“Why have our people been forced into exile? Why are we the ones attacked?” despairs the sheikh. “From Syria to Iraq, Afghanistan to Chechnya, innocent Muslims are being slaughtered—entire families destroyed, homes and lands lost forever. We wander through the winter of our existence. Laish? Why? For what reason? What have we done?”

He thunders again: “We live in the end of days predicted by the prophets. There is no turning back. As believers, we stand unafraid. We do what Allah demands because if we forgo the one true path, we remain miserable, mired in failure, because He has forsaken us. Allah has willed our misfortune, our suffering, our backwardness.”

His words hang oppressively in the air—it is a grave accusation against all who call themselves Arab.

“Think carefully on what I’ve said.” The stick again admonishes the butcher. “The time will come when actions will demonstrate the truth of my words. If you block our way, then you and your family must accept the consequences. What is the saying of the People of the Book? ‘You reap what you sow’?” It is a not so veiled threat against the once mainly Christian town. “No cult, no worm, not even the president of the United States, obstructs the will of Allah.”

As quickly as they arrived, the sheikh and his followers file out of a shop that doesn’t even belong to Hussein. The owner, Khaled’s father, is so advanced in years that he is unable to take an active role in the enterprise. In fact, he had been obliged to continue long after he should have retired. His eldest son, after attending the university in Cairo, refused to take over the family business, and Khaled, his youngest, was regarded as too slow-witted to be responsible. It was with some happiness, therefore, that the elderly butcher offered the job to Hussein, who was in desperate need of one.

“A man is lucky if his sons appreciate his handiwork,” the old butcher complained as he showed his new manager around for the first time. Hussein, reminded of Al Jid, agreed. The arrangement worked well. The butcher secured retirement and enhanced his status by doing a favor for a member of such a prominent family. When Hussein decided to sell pork and went to consult him, the old butcher said, “Strip the meat from the bone and the starving won’t be able to tell the difference.” Except for the new fridges, the shop hadn’t changed much since the old man’s day.

Looking around, Hussein is gripped by conflicting emotions. He resents the sheikh’s officious manner and is so angry that his face has turned red. But his blush also contains an element of embarrassment and guilt. He does not want to be pressured into doing something he does not believe in; at the same time, his own conscience will not allow him to feel at ease with what he has done.

He also wonders why they bother with him at all—and there it is again: that niggling suspicion that never really leaves him, that somehow they have found out about his military past. But he shrugs off these thoughts as he always does. If they did know they would come after him—not in broad daylight with rocks and a walking stick, but under the shield of night with a knife. No, Umm al-Khaanazeer, Mother of All Pigs, is responsible for the passion infesting the town, where pork is being sold and eaten, although never in his own home. Hussein is sure about that.

From Mother of All Pigs. Used with permission of Unnamed Press. Copyright © 2017 by Malu Halasa.

Making Sense of the End of the World 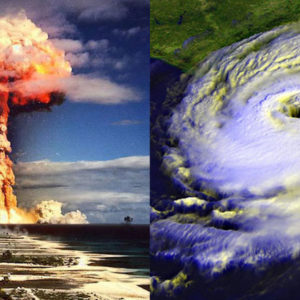 Making Sense of the End of the World We human beings are meaning-hungry creatures. This is especially true when it comes to encounters with death or other severe...
© LitHub
Back to top