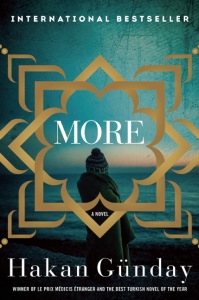 The following is from Hakan Günday’s novel, More, translated by Zeynep Beler. Günday was born in 1976 on the island of Rhodes in Greece and currently lives in Istanbul. He is the bestselling author of eight novels, which have been published in nineteen territories. His first novel, Kinyas Kayra, was published in 2000, and is considered the first underground novel in Turkey. More received Le Prix Medicis Etranger 2015 and the award for Best Turkish Novel of 2011.

There’s no absolute way of knowing how people smuggling began. But if you take into account that it’s possible to undertake such a task with just three people, it’s possible to go way back in human history. The only rewarding line in an otherwise useless book I read years ago was: The first tool man used was another man. So I don’t suppose it was a very long time before somebody put a price on that earliest tool and sold it to others. Accordingly, the beginning of people smuggling on earth can be dated as: first possible chance! After all, since it also encompasses pimping, it’s the second oldest profession in the world. Of course I was unaware that we were upholding the traditions of such an ancient line of work. All I did was sweat all the time and do the best I could to follow my father’s orders. Yet transportation was really the backbone of human smuggling. Without transportation there was nothing. It was the riskiest and most exhausting step of the process. The later part where the immigrants were stuck in a den, worked eighteen hours a day making fake purses, were made to sleep on the ground, and even got fucked if they struck someone’s fancy, was child’s play compared to what we did. We were the true laborers of the people-smuggling industry, working under the heaviest conditions! First of all, we were under constant pressure. The ones making the delivery, the ones picking it up, the middlemen, they were all after us. Everyone held us accountable for the smallest setback. Time was never in our favor, and everything that could possibly go wrong at first always pretended not to and then went wrong sevenfold. It wasn’t that the operation was so complicated, but as it goes with illegal work, no one trusted anyone else and every step had to be taken as painstakingly as if we were in a field of glass.

The goods came from the Iran border three times a month, were joined up with the ones from Iraq or Syria if there were any, and sent out to us. They usually came in an eighteen-wheeler. A different one every time, of course. Occasionally the goods were divided up and parceled out to vehicles such as trucks, pickup trucks, or minibuses. A man named Aruz organized the entry across the Iran border and the departure of the goods. He was probably President of the Administration Committee of the Executive Counsel of Coordination for Aiding Persons in Unrestricted International Roaming in Return for a Determined Fee in Compliance with the Tariff of the People’s Revolutionary Movement as Part of Covering the Free Living Expenses and Democratic War Expenditures of the Board of Directors’ Command Dedicated to the Perpetuity of Leadership and the Indivisible Totality of Kurdistan of the PKK, or something. The determined fee required for unrestricted roaming was whatever came from the heart. It included the heart. Or the kidneys, plus expenses, or whatever . . . all in all, if you were to ask Aruz, he would have said that he was one of the PKK’s ministers in charge of smuggling. But he was responsible only for people smuggling. Drugs, petrol, cigarettes, and guns were handled by other ministries. Which was the way it should be: duties that were different in objective should also be set apart managerially. Otherwise everything would get tangled up and poisoned. After Turkey’s exemplary Ministry of Culture and Tourism—which was as bizarre a title as Ministry of War and Peace—no one wanted to repeat the same mistake. When two opposite concerns, one completely occupied with moneymaking and the other with unconditional support and conservation, were brought together under the same ministry, culture was reduced to nothing more than a dried-up giveaway pen, and tourism the halfway erased logo of a five-star hotel on that same pen. But who cared? Not Aruz, that was for sure! Every bit as much an expert of commerce as of violence, Aruz’s approach to tourism was totally different. First of all, he ran his illegal travel agency empire by telephone only. By eating phones, I mean.

That was the presumption, because I could never make out what he was saying with his drowned hippo’s voice, and would repeatedly say, “I kiss your hands, Uncle Aruz!” or sometimes, if I was in a bad mood and felt like pissing him off as well, ask, “How’s Felat?”

When the name of his child, who was nothing like his dream son, came up, he might start grumbling like a beached whale, but would generally just make a sound that might have been laughter, and ask for my father. That, I’d deduce from his having stopped talking. Really, there was a love-hate relationship between my father and him. They could talk on the phone for hours. I think it was also out of obligation. After all, it was impossible for them to backstab each other over the phone.

The backstabbing in question meant of course a part of the goods being missing or being shown as missing. I knew that my father didn’t smuggle out some of the immigrants he received and sent them instead to Istanbul. These were sold as slaves to some form of textile production or other, or some form of consumption like prostitution. Then my father would revert his tone from almighty judge to almighty accused and moan to Aruz about the fake disasters that had befallen us and resulted in the loss of the goods. And since every single calculation was made per head, Aruz would bellow like a rhino at least half an hour, then mumble a threat and hang up on my father because he knew he’d never find a more reliable trucker.

In fact, at some point, as a precaution against all this, he’d begun having numbers tattooed on the right heel of each immigrant and keeping a photo archive of these. When one vanished, he’d ask, “Tell me the number, which one was it?” He liked this photo business so much, one day he called my father to say, “Find number twelve!” and when rolling up number twelve’s pant leg, revealed the words “Up yours,” Aruz laughed like a baby elephant.

What was up my father’s was, of course, the recent victory of the football team Aruz supported over his. The papyrus scroll used to deliver the message was an Uzbek in his twenties. I don’t know why, but he also laughed. Maybe he was a lunatic. Actually, I think they were all lunatics. All those Uzbeks, Afghanis, Turkmenians, Malians, Kyrgyzes, Indonesians, Burmans, Pakistanis, Iranians, Malaysians, Syrians, Armenians, Azerbaijanis, Kurds, Kazakhs, Turks, all of them . . . because only a lunatic would put up with all this. All this meaning, in a sense, us: Aruz, my father, the brothers Harmin and Dordor, who were captains of the ship that took the immigrants to Greece, the men with guns that increased or decreased in number depending on the tide of crime rates, and all the other basket cases I didn’t yet know by name, lined up on a road tens of thousands of kilometers long to carry tons of people hand over hand into the world . . .

Especially the brothers Harmin and Dordor. They were the strangest people I could ever hope to meet in this life, and I really loved them. Because with them, it was like life didn’t exist. When it had no rules, life slowly dissolved into the air. Time, morals, my father, fear: it was all gone. They were barbaric enough to turn any modicum of civilization they encountered into a desert, make a gigantic mirror out of its sand, and write farewell messages onto it with lipstick-colored blood. They both took me by the hand and brought me many times to the end of humanity and back, but regrettably, on our last trip, forgot about me and left me there . . .

Yes, my father was a merciless man and of course Aruz, being an orangutan, had an inner world as big as a plastic model of the earth. But the brothers Harmin and Dordor were something else. A pair of Arthur Cravans! Their grand total was four meters and two hundred fifty kilos. Yet despite all that meat, their voices were tiny. They always whispered so I had to rise up on my toes to hear what they were saying. They were constantly tattooing each other, and I’d strain to see what they were drawing. After a while I realized that, naturally, it was the same sentences every time:

It was written all over them. On their legs, arms, the backs of their necks, their feet, hands . . .

“It’s all names of broads!” Harmin would say.

Dordor, who could tell I didn’t buy it, would say, “It’s in old Turkish, pal. Ottoman!” and laugh.

Three years would have to pass for me to learn what those words meant. Harmin told me the morning after the night Dordor was killed, stabbed sixty-six times by four of Aruz’s men. In his usual whisper:

“We must have been around your age . . . We went and stowed away on a ship. Wanted to travel the world. Anyway . . . One day we dropped anchor, we’re in Australia! Let’s go ashore, we said. But no! We just couldn’t. Man, we said, what the hell is this? We don’t feel well, we’re dizzy, feeling sick to our stomachs . . . The mere mention, going ashore, and we go white as a sheet . . . You know how people have fear of the sea? You get seasick . . . turns out we’d begun to get landsick. We asked if there was such a sickness. No, they said. They didn’t have it but we fucking well did! After that we always stayed at sea. Years passed this way. So you see, we never did travel the world! We traveled the sea. . . Remember how you used to ask? ‘What do these tattoos mean?’ That’s what they mean . . . This entire story . . . This is the Turkish version. One day you can go and learn the English one too . . .”

“Where’d you learn English, then?” I asked.

“At the Belconnen Remand!” he said. Seeing I didn’t understand, he added, “Prison . . . in Australia.”

“But you said you never made it on land!” I began to say, and he snapped, “We didn’t! We went under it.”

I hadn’t understood a word of that. I thought he was messing with me as usual. I couldn’t comprehend. Turns out whatever sickness it was that he had, he was contaminating me too. On the front steps of the morgue where Dordor lay, no less . . . Then he went off to shoot Aruz, of course. But he couldn’t kill him and died . . . As for myself, I learned English. So . . . now I know that they’re both free. Not on, perhaps, but beneath the land they’d been trapped under . . .

From MORE: A NOVEL by Hakan Günday. Used with permission of Arcade Publishing, an imprint of Skyhorse Publishing. Copyright © 2016.

How Fiction Treats the Elderly, Aging, and Ancient 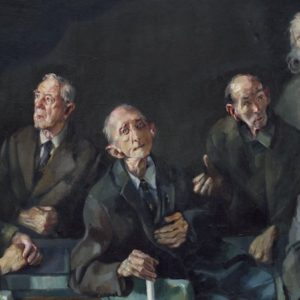 How Fiction Treats the Elderly, Aging, and Ancient The opening lines of Peter Carey’s 1985 novel Illywhacker introduce the reader to the novel’s narrator Herbert Badgery....
© LitHub
Back to top