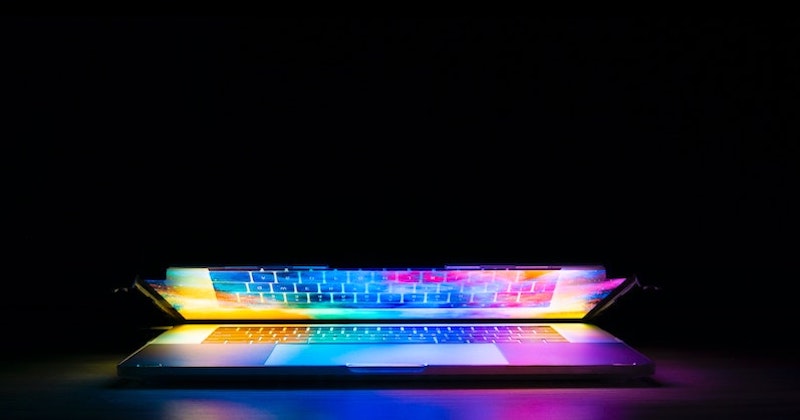 On Death, Time, and Computers

Via Grove Press
By Jeanette Winterson

In 2009—four years after it was published—I read Ray Kurzweil’s The Singularity Is Near. It is an optimistic view of the future—a future that depends on computational technology. A future of superintelligent machines. It is also a future where humans will transcend our present biological limits.

After that, just for my own interest, year-in, year-out, I started to track this future; that meant a weekly read through New Scientist, Wired, the excellent technology pieces in the New York Times and the Atlantic, as well as following the money via the Economist and Financial Times. I picked up any new science and tech books that came out, but it wasn’t enough for me. I felt I wasn’t seeing the bigger picture.

I am a storyteller by trade—and I know everything we do is a fiction until it’s a fact: the dream of flying, the dream of space travel, the dream of speaking to someone instantly, across time and space, the dream of not dying—or of returning. The dream of life-forms, not human, but alongside the human. Other realms. Other worlds.

Long before I read Ray Kurzweil, I read Harold Bloom, the American Jewish literary critic, whose pursuit of excellence was relentless. One of his more private books—in that he was unravelling something for himself—is The Book of J (1990), where Bloom looks at the earliest texts that were later redacted and varnished to become the Hebrew Bible. The first 5 books, the Pentateuch, were written around 10 centuries before the birth of the man Jesus—so they are separated from us by around 3,000 years.

When I think about artificial intelligence, and what is surely to follow, it seems to me that what this affects most, now and later, isn’t space but time.

Bloom thinks that the author of those early texts was a woman, and Bloom was certainly no feminist. His arguments are persuasive and it delights me that the most famous character in Western literature—God, the Author of All—was himself authored by a woman.

In the exploration of this story, Bloom offers his own translation of the Blessing—the Blessing promised by Yahweh to Israel—but really, the blessing any of us would want. And it isn’t ‘Be fruitful and multiply’—that’s a command, not a blessing. It is this: More Life into a Time Without Boundaries.

Isn’t that what computing technology will offer?

Bloom points out that most humans are fixated on space without boundaries. Think about it: land-grab, colonization, urban creep, loss of habitat, the current fad for seasteading (sea cities with vast oceans at their disposal).

The brain uses chemicals to transmit information. A computer uses electricity. Signals travel at high speeds through the nervous system (neurons fire 200 times a second, or 200 hertz) but computer processors are measured in gigahertz— billions of cycles per second.

We know how fast computers are at calculation—that’s how it all started, back in Bletchley Park in World War Two, when the human teams just couldn’t calculate fast enough to crack the German Enigma codes. Computers use brute force to process numbers and data. In time terms, they can get through more, faster.

Acceleration has been the keyword in our world since the Industrial Revolution. Machines use time differently to humans. Computers are not time-bound. As biological beings, humans are subject to time, most importantly our allotted span: we die.

And we hate it.

One of the near-future breakthroughs humans can expect is to live longer, healthier lives, perhaps much longer, even 1,000-year lives, if AI biologist Aubrey de Grey is right. Rejuvenation biotechnology will aim to slow down the accumulation of aging damage in our organs and tissues, as well as repairing or replacing what is no longer fit for purpose.

More life into a time without boundaries.

And if that doesn’t work there is always the possibility of brain upload, where the contents of your brain are transferred to another platform—initially not made of meat.

Would you choose that?

What if dying is a choice?

Living long, perhaps living forever, will certainly affect our notions of time—but recall that clock-time is really only an invention/necessity of the Machine Age. Animals don’t live on clock-time, they live seasonally. Humans will find new ways of measuring time.

I wanted to think about the start of the Machine Age—the Industrial Revolution, and its impact on humans. I come from Lancashire, where those first, vast, cotton-processing factories changed life on earth for everyone. It is so near in time—only 250 years—how did we get where we are now?

I wanted to know why so few women seem to be interested in computing science. Was it always the case?

And I wanted to get a bigger picture of AI, by considering religion, philosophy, literature, myth, art, the stories we tell about human life on earth, our sci-fi, our movies, our enduring fascination/intuition that there might be more going on—whether it’s ET, aliens or angels. 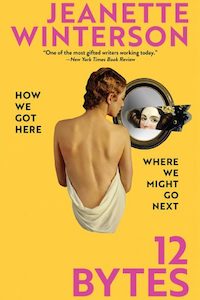 Excerpted from Twelve Bytes: How We Got Here. Where We Might Go Next. © 2021 Jeanette Winterson. Reprinted with permission of the publisher, Grove Press, an imprint of Grove Atlantic, Inc. All rights reserved.

An Essay About Tiny, Spectacular Futures Written a Week or So After a Very Damning IPCC Climate Report 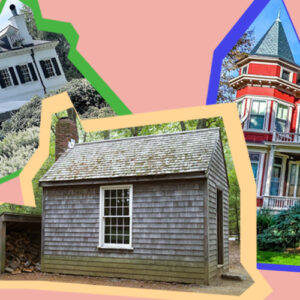 Famous Writers’ Houses: A Taxonomy Do you remember the game MASH? If not, it was a weirdly entertaining pen-and-paper fortune-telling game—huge in middle...
© LitHub
Back to top
Loading Comments...