From Mansions to Apartments to Haunted Houses

Do you remember the game MASH? If not, it was a weirdly entertaining pen-and-paper fortune-telling game—huge in middle school—in which you and your friends gave yourself various options that were then selected by, essentially, random (the number of letters in your name, the number of dashes or swirls your friend could make on the paper before you said stop; any human-powered number-generation system would work). Categories were endless (partners, pets, jobs, number of children, etc.) but it was the titular options of MASH that told you where you were going to live: in a Mansion, Apartment, Shack, or House. Like a horoscope, these categories are vague enough to be relatively predictive. Anything can be a mansion if you want it to be.

So here’s where I say Famous writers: they’re just like us. Because they too often live in Mansions, Apartments, Shacks, and (Haunted) Houses (and yes, in lots of other places too, including normal houses and brownstones, but that’s not the game). Here are just a few standout examples in each category, for planning your own future writing digs. Just pay attention to the number of kids the fates have assigned to you. 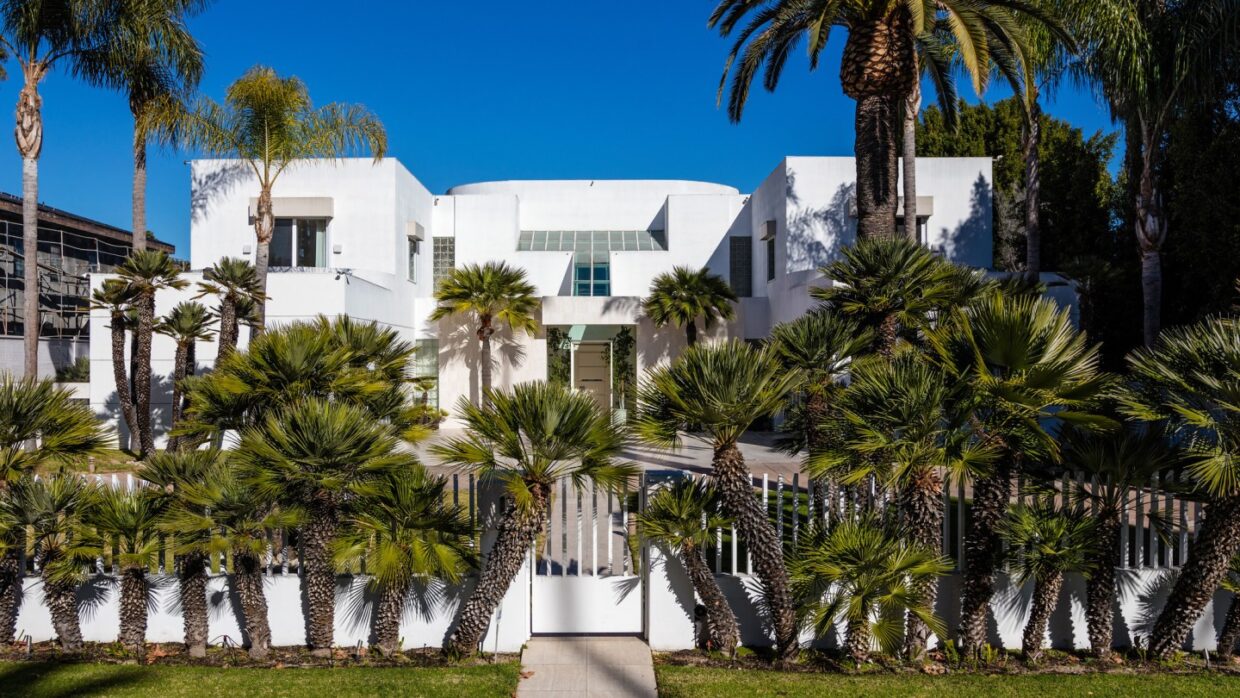 Foremost on my list is the Art Deco Beverley Hills mansion of Jackie Collins, “the Proust of Hollywood,” which she designed to her exact specifications with the help of her second husband Oscar Lerman—who died just as the house was completed—and architect Ardie Tavangarian. “I’d always wanted the Hockney painting A Bigger Splash,” she told Vanity Fair‘s John Heilpern. “But I could never get it. So I thought the best alternative was to have my own Hockney pool that looked like the painting.” Collins lived there until her own death in 2015. In 1995, when Heilpern got a tour, he found that pool, and a security guard, a 60-foot marble entryway (“The staircase in Sunset Boulevard looks a bit cramped compared with hers”), eleven bronze and silver leopard sculptures, “two exquisite Biedermeier desks, various Buddhas, and many family photos in silver frames,” and “a leather-bound collection of all her original manuscripts” (all written by hand on legal pads), and plenty of art, but not the art you’re supposed to have. “The house was Jackie,” Tavangarian told CNN. “The house was about her.” 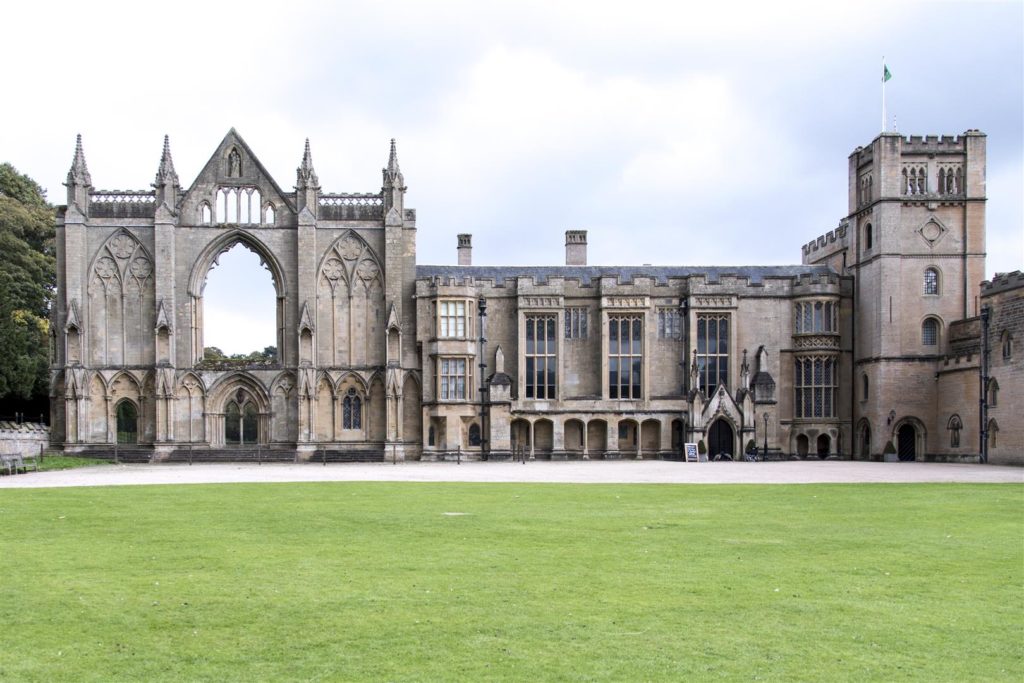 Well yes, Lord Byron did live in an insane abbey, which even, like all fancy English residences, has a name: Newstead Abbey. The poet inherited his ancestral family home at the age of 10, when his great uncle died; though grand, it needed a lot of work, and he rarely lived in the abbey full time. His dog Botswain is buried there, alongside a large monument bearing a poem Byron wrote for the occasion. Now you can get married there, if you are so inclined. 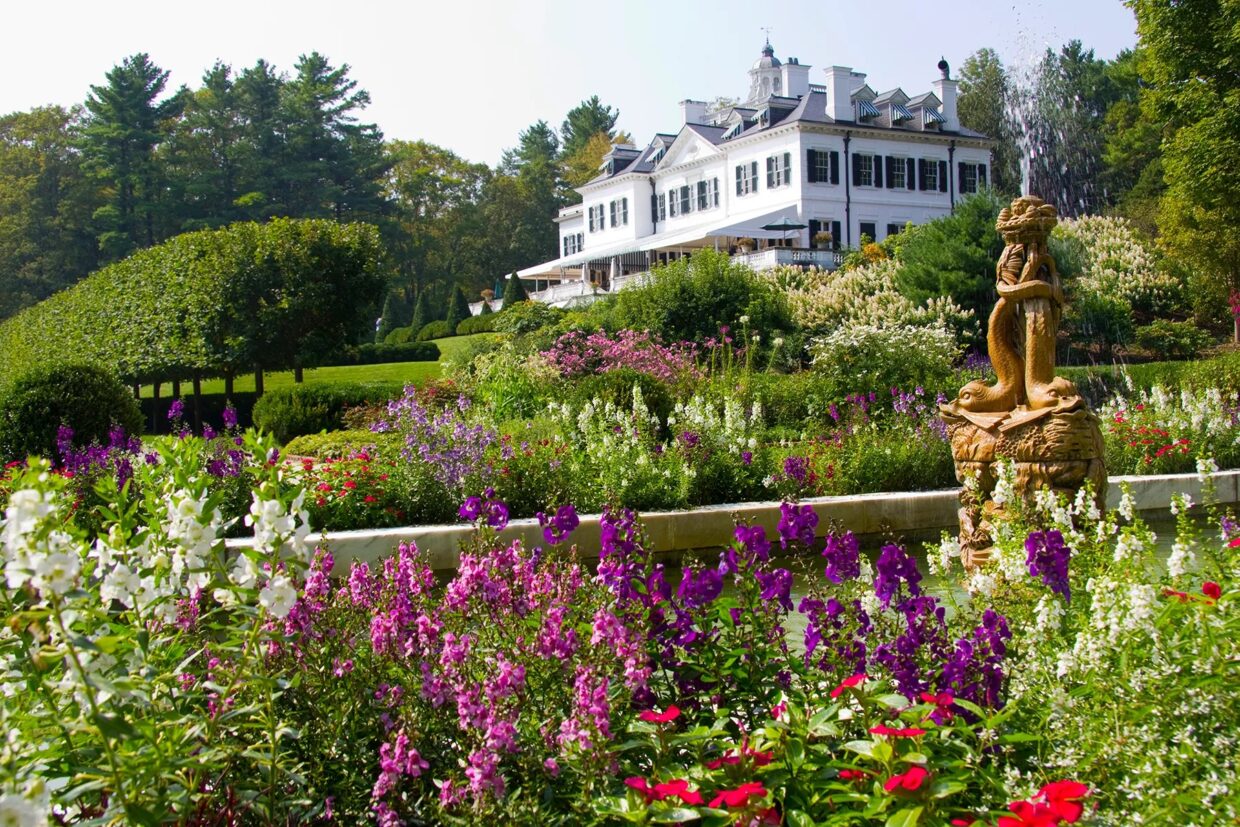 Edith Wharton also had a named mansion: The Mount, her gorgeous estate in Lenox, Massachusetts, where she wrote her novels, looking out at her dog cemetery (dog ghosts have indeed been spotted). Wharton designed the house, which sits on a hill overlooking 113 acres, with architect Ogden Codman Jr. in 1901. “Informed by French, Italian, and English designs (particularly Belton House, a 17th-century English estate), Wharton, determined to break from the excess and frilly ornament of her upbringing, focused on classical moderation, order, scale, and harmony,” writes Sam Lubell. “The white stucco home, set off by dark green shutters, is punctuated by vertical clusters of gables and chimneys. Classically decorated main-floor rooms, judiciously spaced with tasteful furniture, open onto a long, vaulted gallery.” Which isn’t even to start on the gardens… 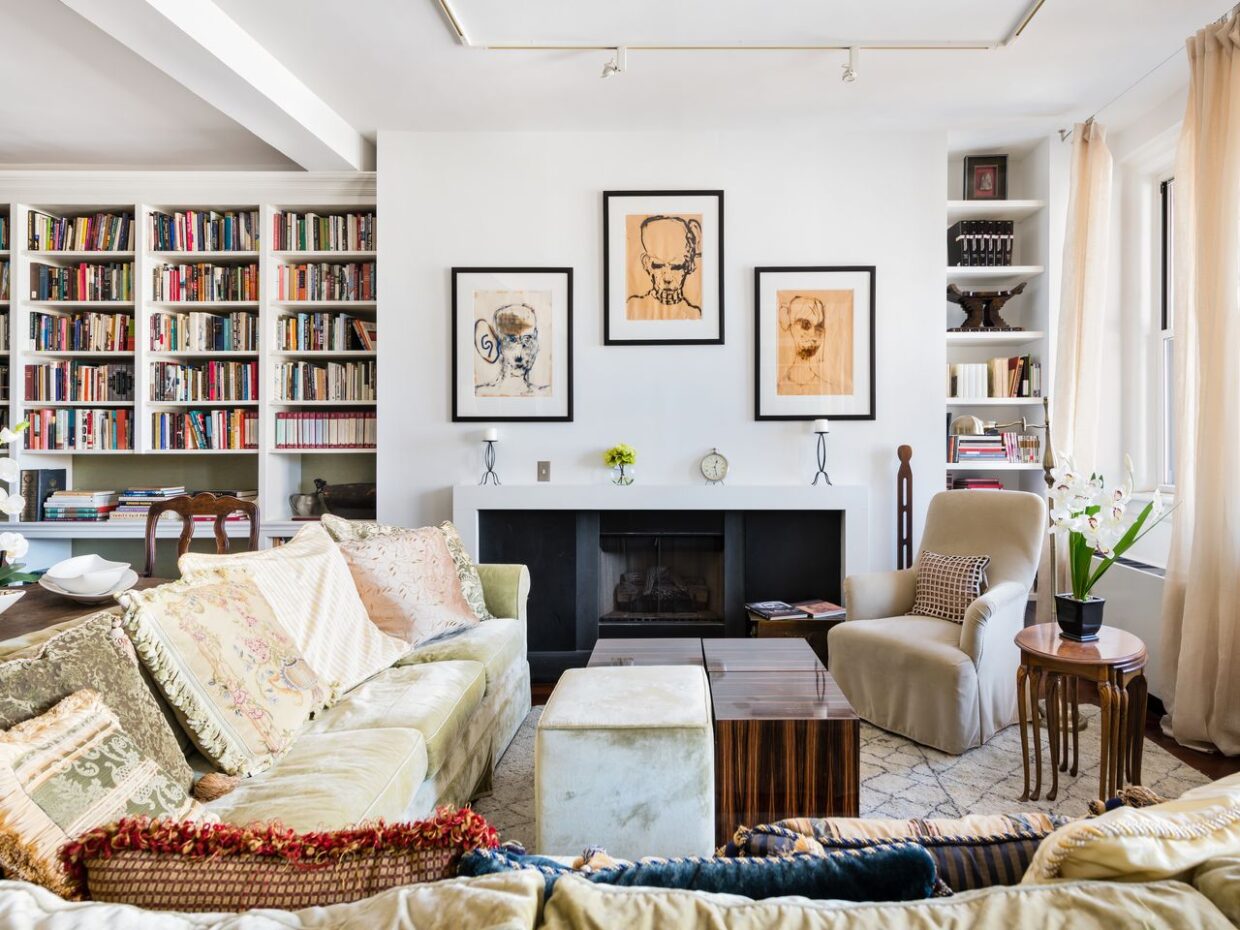 We got to see inside Toni Morrison’s three-bedroom, two-and-a-half-bathroom condo in Tribeca when it went up for sale last year (for a cool $4.75 million). “The entire apartment was designed for comfort and contemplation,” listing agent Amanda Brainerd told Mansion Global, “for curling up with a good book or writing.” More importantly, it has the two things every writer needs most: built-in bookshelves and a deep soaking tub. Probably quiet, too. 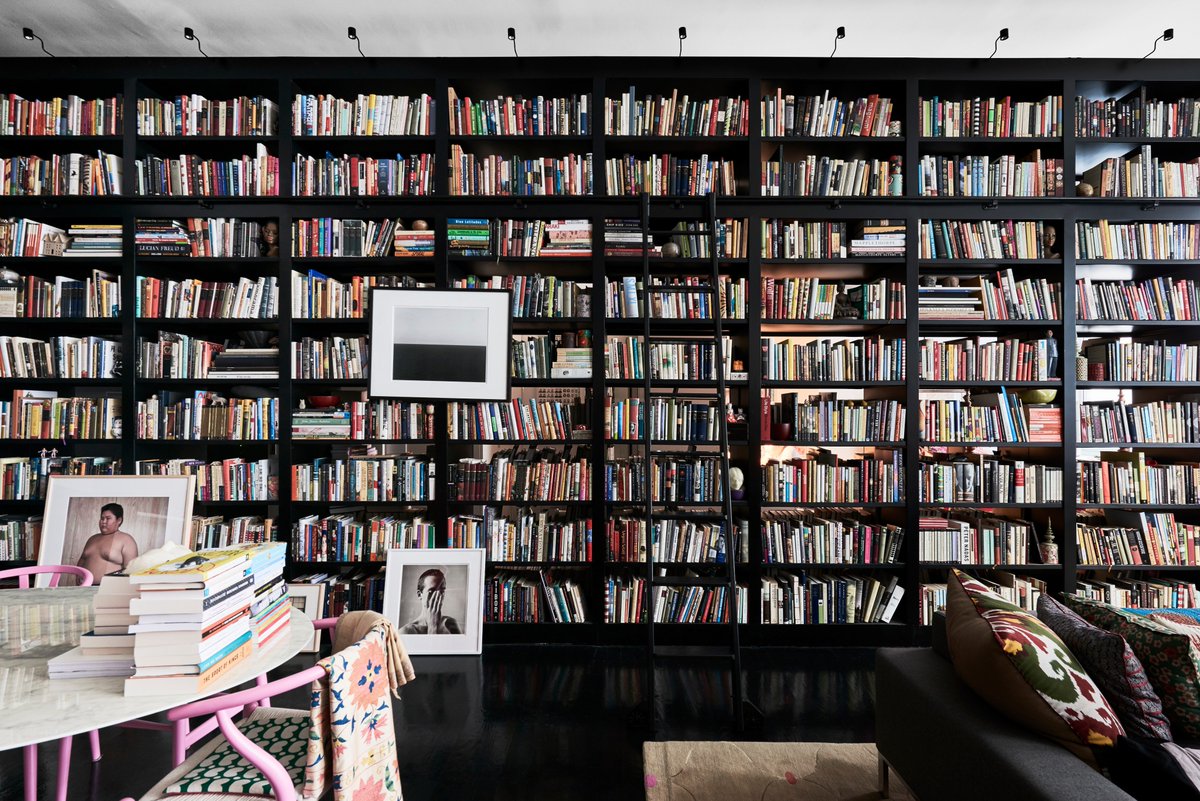 There are over 12,000 books in Hanya Yanagihara’s one-bedroom, 1,200-square-foot Soho loft, which feels insane all on its own (does it make her a book hoarder?). She has also managed to fit quite a lot of art in there. Oh, and a hinoki soaking tub. The apartment, she told the Guardian, “offers me protection from the city. And it gives me the confidence to make mistakes. I always value a space that reflects who the owner thinks she is, not who she thinks she should be.” 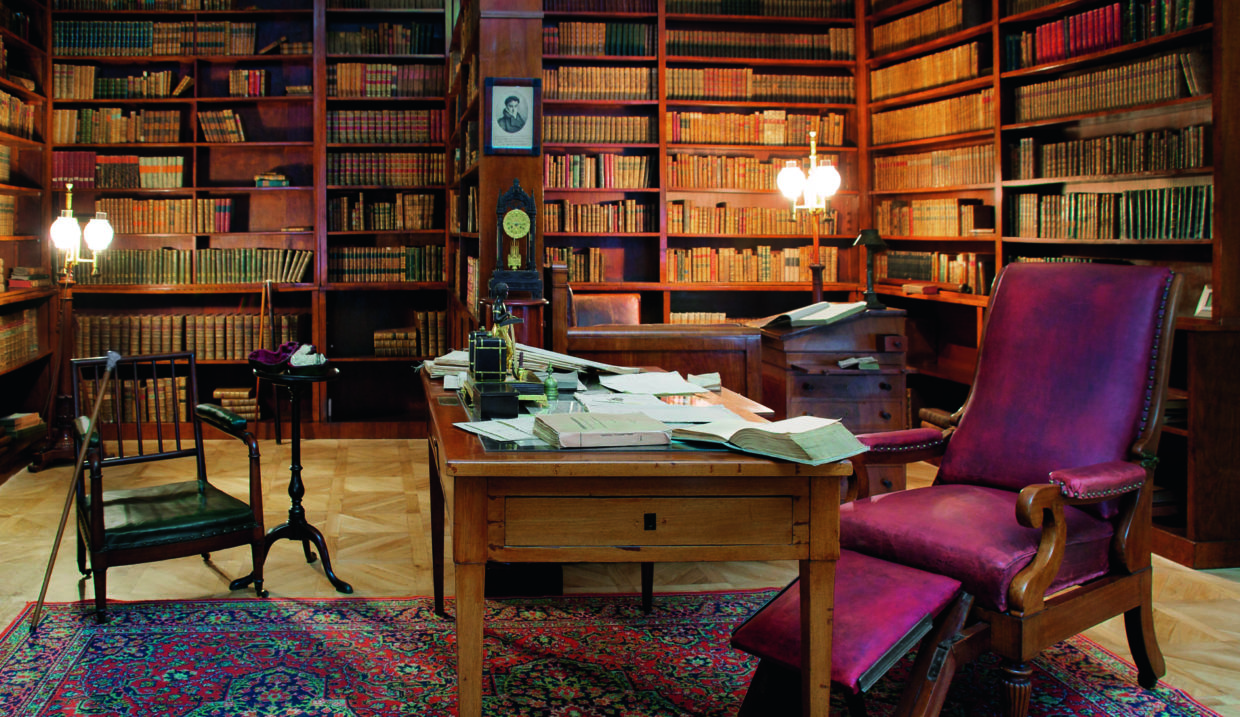 Alexander Pushkin only lived in this book-filled St. Petersburg apartment on the Moika River for four months, but since he died there, it is now the Pushkin Memorial Apartment. “Showcasing Pushkin’s wealth, which stemmed from his noble upbringing and profound success, his ground-floor apartment contains 11 lavish, pale-hued rooms, enhanced by elegant classical-style wood moldings and furniture,” Sam Lubell wrote. “Pushkin’s study is dominated by his embossed leather desk, topped by letters and manuscripts, and his red leather armchair. Dark wood shelves are densely filled with the poet’s exceptional collection of books. The apartment also contains a lock of the poet’s hair, a death mask, Natalya’s jewelry, portraits of their children, and the sofa on which Pushkin died.” Cheery. 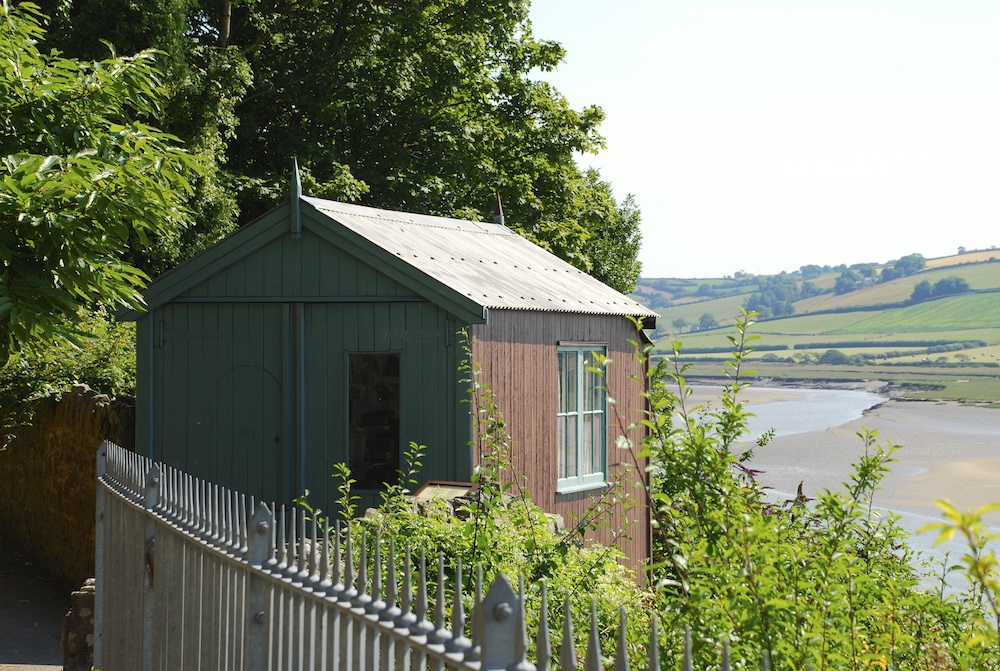 All right, calling Dylan Thomas’s boathouse in Laugharne, Wales a “shack” feels harsh—it’s small but undeniably cool and beautifully situated—but that legendary writing shed on the property? That’s a shack in the best way. 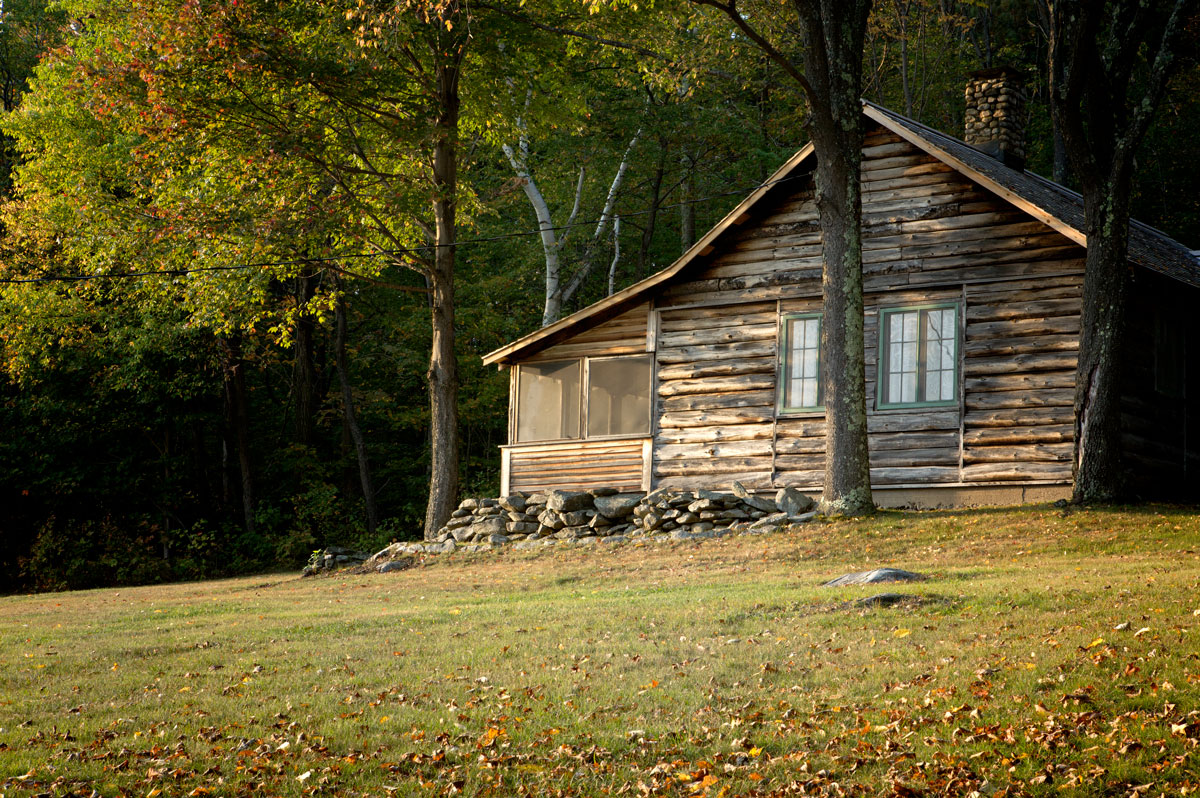 Robert Frost owned a lovely little 1769 stone Dutch Colonial in South Shaftsbury, Vermont, but lived and worked in the summers at Robert Frost Farm in Ripton, where he often stayed in this rustic writing cabin. 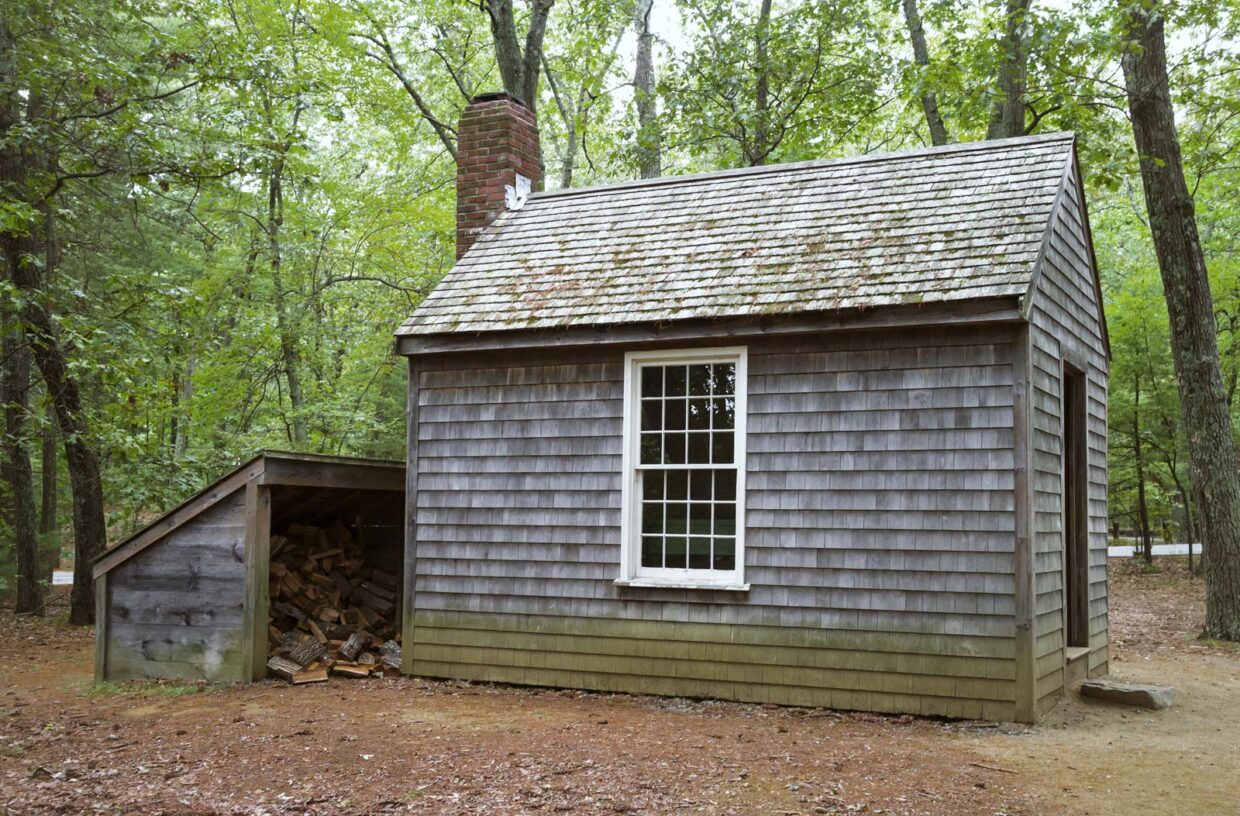 It’s a lot easier to live in a one-room cabin in the woods if, like Henry David Thoreau, your mom is still willing to do your laundry. 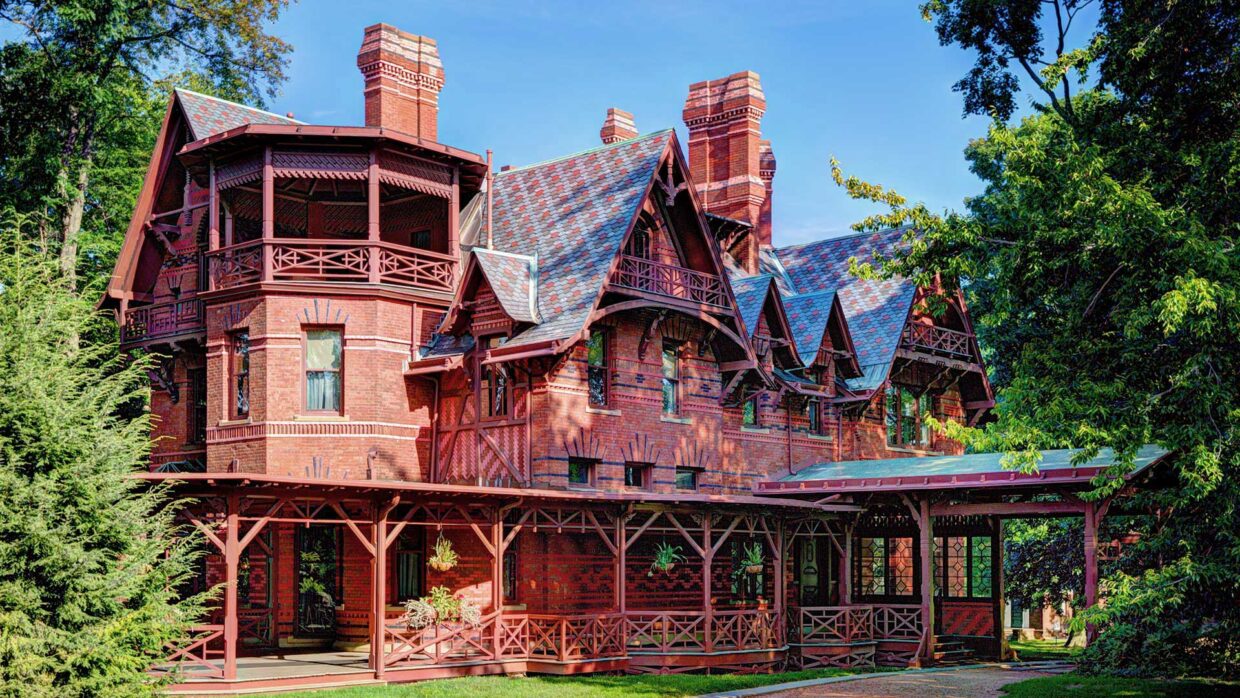 It doesn’t get much more haunted than Mark Twain’s rambling 19th century Victorian, which was designed by architect Edward Tuckerman Potter and spans a whopping 11,500 square feet, with 25 rooms. The spookiest part? It cost them no more than $45,000. 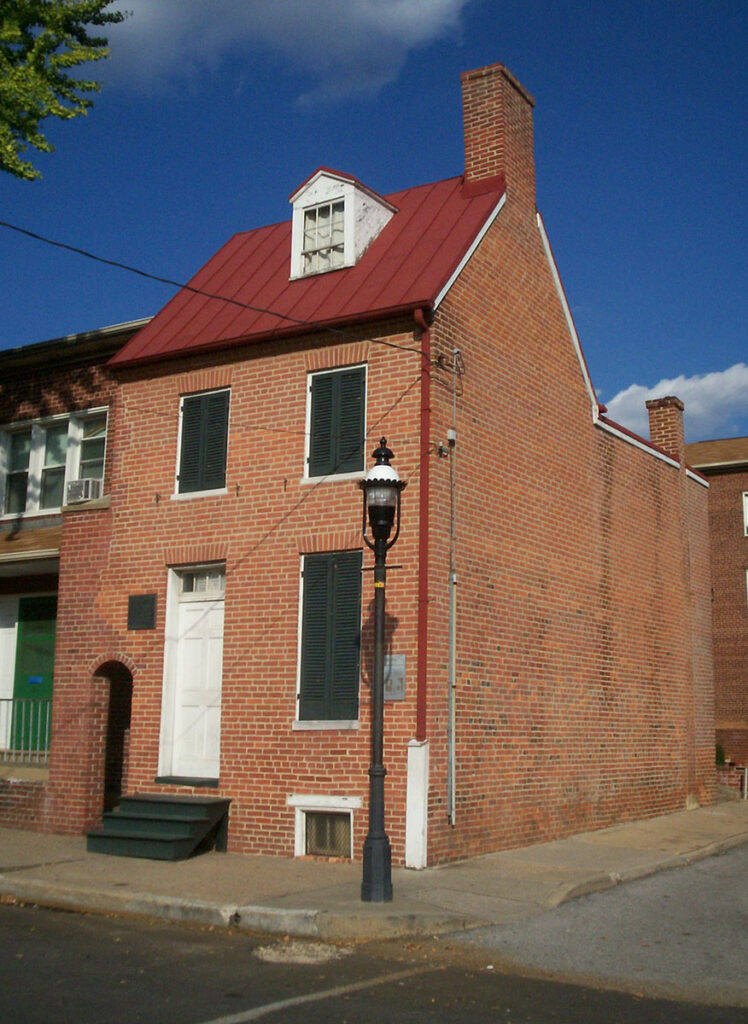 Edgar Allan Poe’s house in Baltimore has a much lower profile, but still definitely seems haunted. The black shutters, the brick, the blankness, the weird incongruity with the row. Even the blue sky in this photo isn’t making me feel any better. 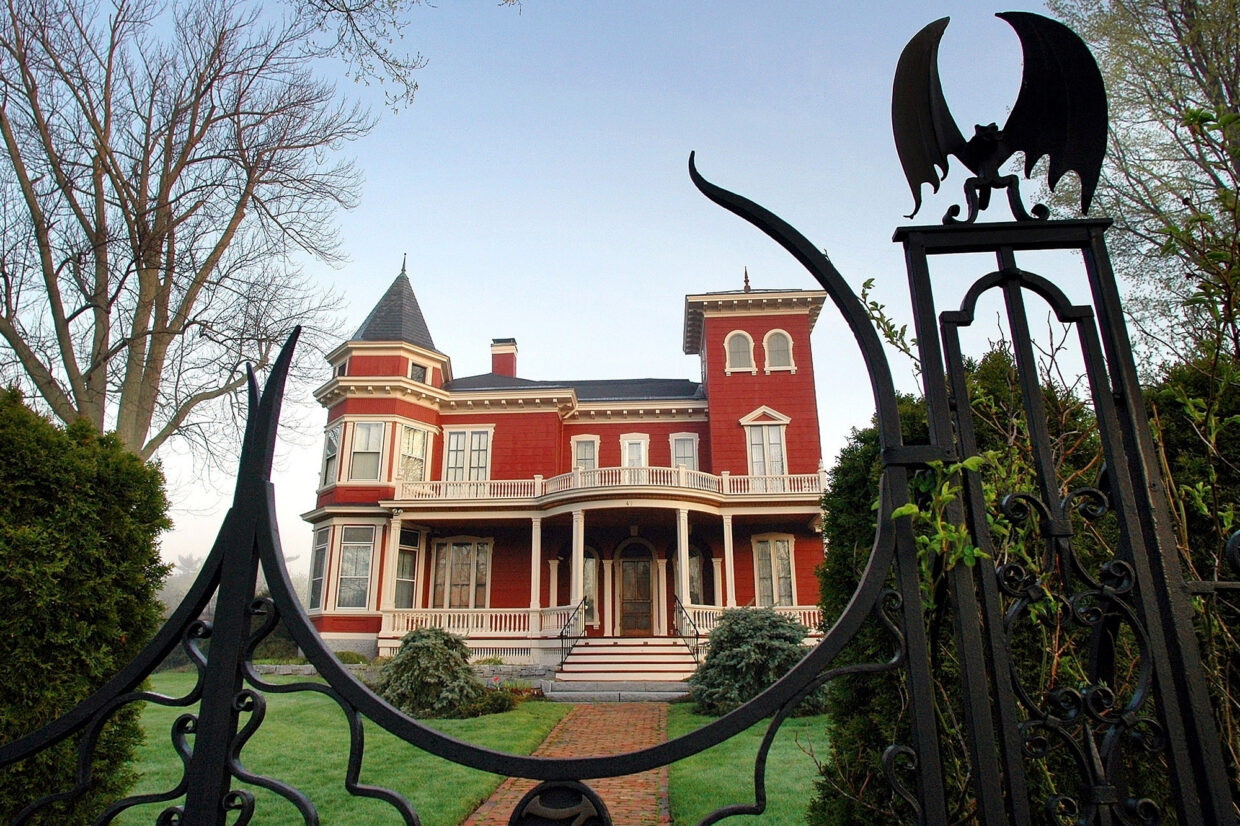 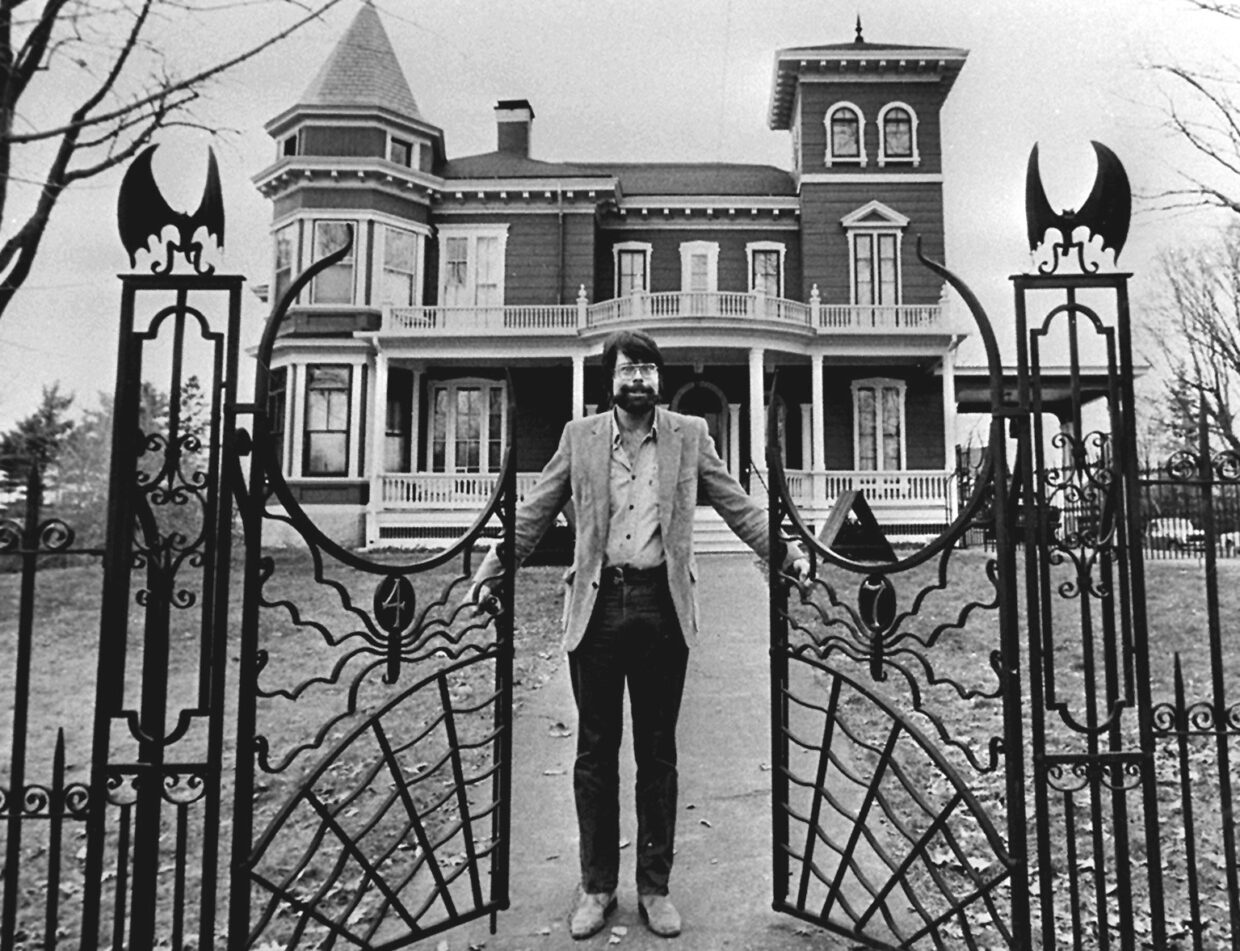 But finally, the Socratic ideal of the haunted writer house is, of course, Stephen King’s own 19th century Victorian in Bangor, Maine—which comes complete with ironwork bats and spiderwebs—which he bought in the 80s and is now turning into a writer’s retreat. After all, these days he and Tabitha now mostly spend their days in Florida, which is a whole other kind of haunted.

“You Only Write if You Have To.“ On W.G. Sebald’s Life and Work 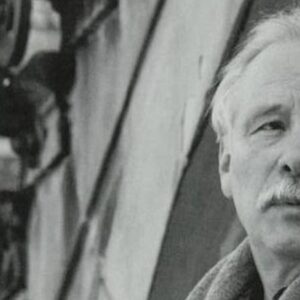 “You Only Write if You Have To.“ On W.G. Sebald’s Life and Work How far must one go back, Sebald asked in After Nature, to find the beginning? And answered: perhaps to the morning...
© LitHub
Back to top
Loading Comments...