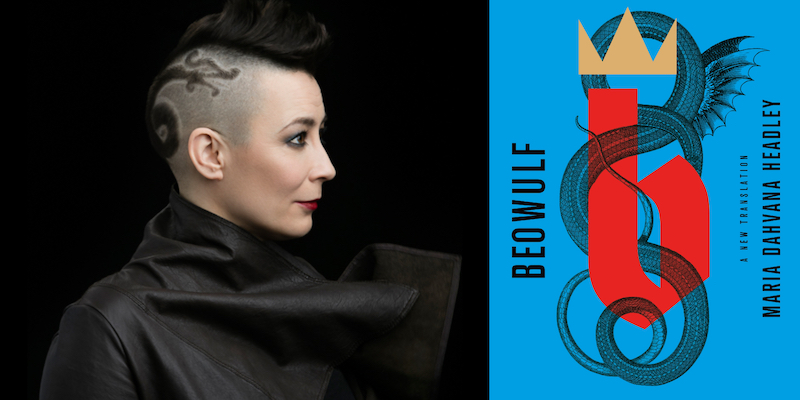 In this week’s episode of Fiction/Non/Fiction, co-hosts Whitney Terrell and V.V. Ganeshananthan talk to #1 New York Times best-selling author Maria Dahvana Headley about the modern-day relevance of the epic poem Beowulf. She talks about her new translation of the ancient text, and illuminates how the “shit-talking” masculinity of the heroes of old can help us understand our current so-called leaders.

To hear the full episode, subscribe to the Fiction/Non/Fiction podcast through iTunes, Google Play, Stitcher, Spotify, or your favorite podcast app (include the forward slashes when searching). You can also listen by streaming from the player below. And check out video excerpts from our interviews at LitHub’s Virtual Book Channel and Fiction/Non/Fiction’s YouTube Channel.

This episode was produced by Andrea Tudhope.

Whitney Terrell: Your 2018 novel The Mere Wife also modernized Beowulf and portrayed Grendel’s mother as a war veteran, Dana Mills, who gives birth to Grendel following her rape. Here, once more, your portrayal of Grendel’s mother is a feminist one, and your version underlines the character’s humanity rather than make her just a monster. What was it like for you to move from the Dana Mills version of this character to the one from the translation itself?

Maria Dahvana Headley: It was a really interesting experience. I had been working on the novel for several years, and I had been inspired in part by the 2016 election and the ways in which white women had voted for Trump against their own better understanding of what it is to be a woman in this society, I think. I was interested in looking at the women of the Beowulf story and looking at the ways in which neighbors are monsterized in order to keep the same group of people in power over and over again. The Dana Mills character is the Grendel’s mother character in that. She’s a war veteran, she’s a soldier, and I had gone to great lengths to really get into her head and see what kind of person would, in the story, hide from larger society. It’s a story about class; it’s a story about race. It’s a story about ongoing discomfort at both ends of the spectrum. And in the translation—which is really a translation, I translated every line of the Beowulf poem—I didn’t go afield.

MDH: I didn’t cheat. The style is far afield from what the original would be, but the content is not. So it was actually a really interesting experience. The Grendel’s mother character—her big battle is only about 100 lines of the 3,000. It’s pretty short. It’s brutal, and she is really fierce.

WT: The prose in that part, and the way you translated it—when she’s grabbing onto him and leading him through the hall, and you have that sense of all these sea monsters coming around and biting at him, and he’s looking at the walls—the way it’s described is really amazing, I thought.

MDH: It’s a pretty amazing sequence in the original. Beowulf, you have to remember, is about 18 years old. He’s just a kid, and Grendel’s mother has been the queen of her own domain for 50 years. She’s like Hrothgar. She’s an old woman and she is so ferocious that he almost dies. And he is this major warrior; he’s so hardcore. Everyone thinks he can slay 30 guys with one blow, basically; he’s like a fairytale character. But Grendel’s mother is his equal. The only reason he wins is because God shines a light on a sword and helps him. It’s an interesting state of affairs. It’s a battle of equals and it’s a battle of desperation. It becomes a really agonized battle for her, and she dies, but she dies with honor, and in the original she dies with honor. She’s lauded by the poet even though she’s one of the villains of the poem.

V.V. Ganeshananthan: As I think about the feminism in your work generally, and then also in this translation specifically, I can’t help but think about how the stories of women have played out against our recent stories of so-called kings or would-be kings. The Access Hollywood tape was leaked at this point about four years ago. And yesterday, the thing that was going viral regarding that was Helen Mirren and Sarah Cooper—Helen Mirren is Billy Bush and Sarah Cooper is Trump—redoing the Access Hollywood tape. You can hear Sarah Cooper repeating Donald Trump mythologizing himself, talking about himself as this myth of a man who can get away with anything. “I’m a star, I can do whatever.”

WT: Were you going to say that the Access Hollywood tape is like Beowulf? I love that idea. Fantastic.

VVG: It’s possible we’re stretching slightly, but in your introduction to this book—which is also a huge pleasure to read—you talk about reciting lines of Beowulf to yourself while watching the news. I was curious to hear you talk a little bit about how the shit-talking masculinity of the heroes of old could help us understand our current so-called leaders.

MDH: When I first thought of doing this translation, I knew that I was going to use as the first word, which is hwæt, a word that has a kind of mystery definition. It’s a sort of like, “Give me the floor, give me the floor.” I always felt like the Beowulf story was such a bro story. It’s a story about bragging, about saying, “my guy did this, and I did this, and it was amazing, and I fucking saw it, I was there.” So the poem, in this case, supports the ongoing growth of masculine mythology; we’ve been reading this poem for about 200 years in English translation. Even if you don’t know the poem, even if you haven’t read it, you have heard bits of it because it’s incorporated itself into our society. The ways that we talk about heroes and monsters in our contemporary American society are really similar to the ways they’re talked about in the poem, and that’s for a reason. The poem is taught in high school. It’s a canonical text. It’s one of the few things we would be exposed to—all of us. It’s just influential in that regard.

I think about the ways in which we, societally, talk about masculinity as a heroic trait; we talk about tradition as a justification, and as a heroic justification. We’ve always done it this way. We’ve always killed monsters in order to become heroes. I think about the toxicity of what we have ended up with, which is, uh-oh, there aren’t any monsters. I guess we’ll have to make some monsters really fast. We’ll make some monsters out of our neighbors because otherwise, we can’t achieve peak masculine heroics as a normal person in society. Unless you are actually a warrior, and even in that case, there are consistently problems with heroics, problems with “wrong enemy,” and you’re sent over to do whatever it is.

Trump has always sought to be heroic; he talks about himself using the language of the hero, which is time-honored. The language of “I am mightier than any other man, I am bigger than any other man, I’m stronger, I’m healthier, I’m impervious to disease.” All of these are things that Beowulf says about himself, as do most of the other heroes, who are all liars. In the Odyssey, Odysseus says things like this about himself. And even in the story, you can see that that isn’t true, that things are happening to him that would be very different from the mythology that he is spouting consistently. It’s a tendency, it’s a trope, it’s something that has infiltrated our society and our ways of talking about power. Rather than saying, “I’m not a hero, I’m just kind of an ordinary person,” which is something that the Democrats consistently try to say. It’s hard to use that language and make people feel passionate. But if you use heroic, monster-defeating language, people feel passionate because they’ve been trained to feel passionate about that kind of language. 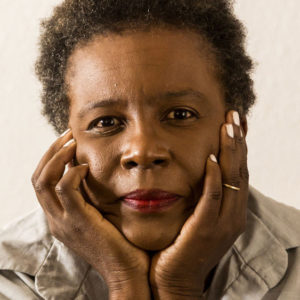 In this episode of Just the Right Book with Roxanne Coady, Claudia Rankine joins Roxanne to discuss her new book, Just Us. From...
© LitHub
Back to top