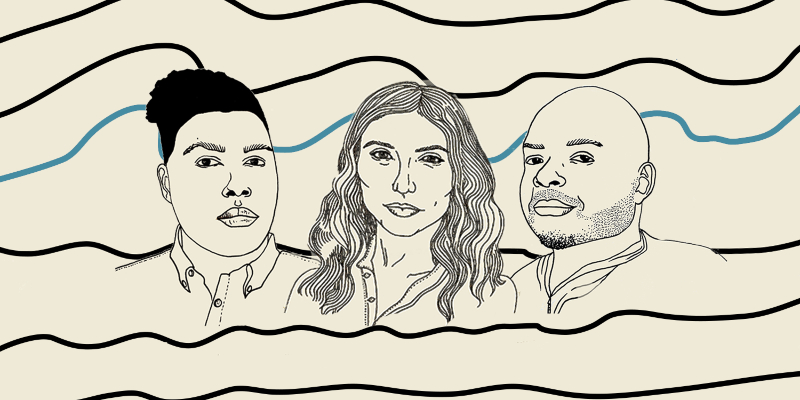 When you work in a field that demands exposing your deepest self to the public, it fosters a deep, even profound kind of humility born from the habit of making oneself vulnerable. The act of opening up is transformative. What makes a memoir powerful? We asked Mira Jacob, author of the award-winning graphic memoir Good Talk to moderate a special roundtable about just that question. She invited the incredible Kiese Laymon and Saeed Jones, and the result is a riveting and enlightening conversation, exploring how a book’s success can hurt the people you love, the isolation of touring, and the necessity of community.

Mira Jacob: One of my questions, just to start us off, is when did you know you were writing a memoir? When did that occur to you? Because for me, I didn’t admit it until my publisher put memoir onto the subtitle of my book. That wasn’t what I had intended to do. But I’m curious about both of you. Did it come to you earlier? Did you know when you started it that it was gonna be this? Kiese, you want to start?

Kiese Laymon: Sure. I’m not sure what to think about titles or genres, you know? I mean, I knew I wanted to write, and then maybe two years after I started to work on this, I really started to think about the memoir. I was judging some contests so I had to read a ton of memoirs that year, it was LA Times’ autobiographical prose award, which ironically I won a few years later. But I was a judge for that, and then I was like, oh, shit. Let me think about the difference between autobiography and memoir and what American memoir does and doesn’t do.

I was writing into the familial stuff all that time, and that word memoir, in some way it distracted me from the hard shit that I was writing. Do you know what I mean? Because then I was just like, okay, how can you make an intervention into this genre form that already exists, as opposed to what I was trying to do, which was trying to do that hard work. Trying to talk about violence and addiction and different kinds of abuse that I survived and different kinds of abuse that I perpetrated. So having the memoir title helped me sort of get through the heart work, in this fucked up way. What about y’all?

Saeed Jones: I would say, in the earliest iterations of me knowing that I was working on a book that was drawn from my personal experiences, I was saying that it was going to be a book of linked essays. One, because the personal essay was a form that I was most comfortable with in terms of writing prose, but also because I think at the time—and this is way back, I’m talking 2012—I think I felt that the word memoir implied a kind of entitlement arrogance, particularly as I was still in my mid-twenties at this time. I had seen certainly a lot of older white people, but also at the time, I felt like there was a whole genre of books by young white men, women, queer, all over, whatever, but always white people, who had written these memoirs about being young and messy. And I was like, I don’t know if that’s the space I’m trying to enter or my intention. So, I was really hesitant.

I think in the long run, though, it was a lot of insecurity, because it ultimately took a series of conversations with my agent, who has represented women like Audre Lorde and Jackie Woodson, who was just like, you deserve to tell your story on your own terms. Which, in the long view, like now as I talk to you, I feel like that’s what a memoir is—telling your story on your own terms. And that can mean a lot of different things, but she really helped me feel like, no, you deserve this, and as long as you don’t think you do, you’re going to have mumble-mouth every time you need to explain the concept for this book to people. So this is something, frankly, you need to deal with if we’re going to go any further. That’s kind of how she brought it to me. And I took it home and sat with what she had said. It was the moment I was like, okay, this is what I’m doing. And my version of a memoir does not have to be even in conversation with those other examples that I’ve been so anxious about. That’s none of my business, actually. The moment I realized that, it was actually pretty freeing.

Mira Jacob is the author of the critically acclaimed novel The Sleepwalker’s Guide to Dancing. Her recent work has appeared in The New York Times Book Review, Vogue, Glamour, Tin House, Electric Literature and Literary Hub. She lives in Brooklyn.

Born and raised in Jackson, Mississippi, Kiese Laymon, Ottilie Schillig Professor in English and Creative Writing and the University of Mississippi, is the author of the novel Long Division and the memoir Heavy.

Saeed Jones is the author of Prelude to Bruise, winner of the 2015 PEN/Joyce Osterweil Award for Poetry and the 2015 Stonewall Book Award/Barbara Gittings Literature Award. The poetry collection was also a finalist for the 2015 National Book Critics Circle Award, as well as awards from Lambda Literary and the Publishing Triangle in 2015. Jones was born in Memphis, Tennessee, and grew up in Lewisville, Texas. He earned a BA at Western Kentucky University and an MFA at Rutgers University-Newark. He lives in Columbus, Ohio, and tweets @TheFerocity. 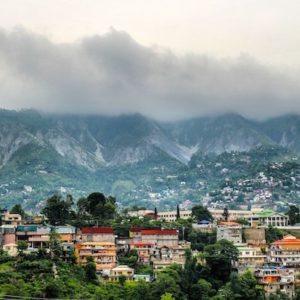 In her story “Hapath Yaraz’ or “a bear’s friendship,” Kashmiri writer Onaiza Drabu illustrates the universal parable...
© LitHub
Back to top