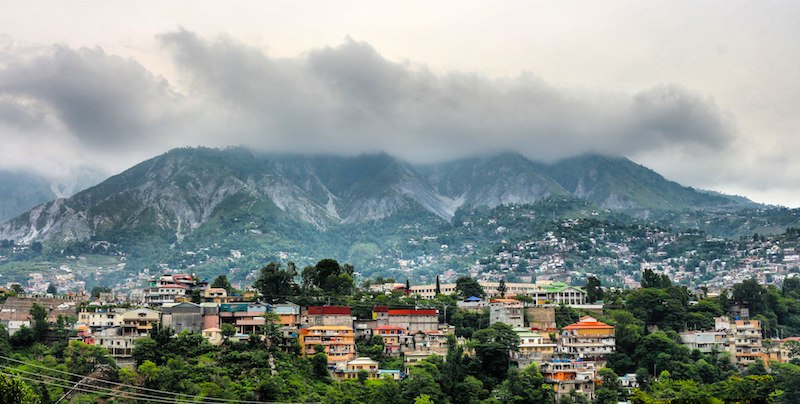 The Enduring Strength and Richness of Kashmir’s
Literary Life

Sharanya Deepak on the Many Landscapes of Kashmiri Writing

In her story “Hapath Yaraz’ or “a bear’s friendship,” Kashmiri writer Onaiza Drabu illustrates the universal parable of a friend who does more harm than good. The story tells of the camaraderie between a man and a bear, who, on a quiet day, sit down for a cup of tea and girdas (Kashmiri flatbread). As the man takes a nap, a flitting bee sits on his face. The bear, trying to protect his friend, throws a rock at the bee, missing the insect but killing the man instead. “Hapath Yaraz” is one of the 29 stories in Drabu’s book The Legend of Himal and Nagrai: Folktales from Kashmir, and it is all written this way: in stories interspersed with the sudden emergence of Kashmiri idioms, untranslatable and intangible to outsiders, that Drabu uses to elevate the flatter English. The proverb, one used among Kashmiris, is universal, but its tale is told in colloquial, discrete language particular to Kashmir.

With the book, Drabu, who was born in Srinagar, the largest city and summer capital of India-controlled Kashmir, created a collection of Kashmiri folktales spanning the region’s many depths. The book travels through the minds of woodcutters in deep forests, grandmothers near old fireplaces dampening rice with warm meat, reckless cousins arguing in cold winter nights. “We Kashmiris love our stories,” she writes. “Cut off from the rest of the world, in this multicultural, multilingual potpourri of customs and traditions, we have spun our own yarns to live by.” Like many folklorists, Drabu understands that folklore reflects the deepest fascinations, fears and the temperaments of the people to whom they belong. “Folktales are alive in everyday rituals, in conversation and in instinct in Kashmir,” she writes.

By speaking through hundreds of Kashmiris, Drabu enacts the idioms of the region, the way proverbs sneak into everyday chat; she tells of fables that predate the region’s vast, mountain-clad landscape and how Kashmiri expressions—often macabre, often comical—hold a secret language of expression. “We are who we are through the stories we told, and the stories we are told,” writes Drabu. “This book is retold so it contributes more than a nostalgic sense of home; for it to have the purpose of upholding memory while fighting erasure.”

Kashmir, a region disputed by India and Pakistan since 1947, lies on both sides of the border between the two countries. India-controlled-Kashmir has been under a military occupation by the Indian state since 1989, and under it, the Indian state has oppressed and brutalized its people for more than three decades. Human rights abuses, erratic arrests, disappearances and constant prison-like surveillance are imposed on Kashmir; the voices of Kashmiris have been silenced, and their movements towards their own self-determination crushed with force. The Indian military holds special powers in the region under the Armed Forces Special Powers Act, where it can, in the claim of security, destroy property, arrest and shoot and shoot any Kashmiri on sight.

More than 47000 people have been killed in the conflict. Recently, 25-year-old Merajuddin Shah was shot dead by the military at a checkpoint. In another incident, 65-year-old Bashir Ahmed Khan was found slain outside his home with his 3-year-old grandson sitting on his chest, and the little boy was later used by members of the  Indian government for supporting their actions in Kashmir. On August 28, 2020, the Shia Muslim festival of Muharram, a procession of mourners was open fired on by the armed forces and police, leaving Kashmiris injured and blinded. On August 5th, 2019, Kashmir’s limited autonomy and statehood under Article 370 of the Indian constitution was revoked, and the valley was put under a communication blackout for more than eight months. The revocation gave sweeping powers to the Indian state to institute what experts call its settler-colonial project in Kashmir, enabling it to seize land and create large demographic shifts that further the dispossession of Kashmiris on their own land.

Daily life in Kashmir is such in which time can quickly jump from banal routine to torrents of grief, and its literature reflects this view of reality.

If the occupation is one of the land, it is also one of narrative; an imperialism on Kashmiri thought and discourse, a chokehold on language and truth. Even today, it is Indians who write most of Kashmir’s most popular histories and stories. These documentations diminish the region to stereotypes, espouse racial and religious bigotry against Kashmiris, and contrive movements of Kashmiri self-determination and resistance as terrorism. In this context, even if Drabu’s folktales do not directly address the conflict, it is integral that she talks of erasure. Folklore is an act of “preserving” Kashmir: its idioms, its language and its varied histories.

Today, Kashmiri writers are of all forms. They write folklore, journalism, novels, blogs, poems, ghazals, nazms: literature can be found scribbled on trees, on social media, in notebooks kept in attics. They write across languages: in Kashmiri, Urdu and English, and within Kashmir lie distinctions, of class, caste and language.

Writing in Kashmir is not only a question of importance, says Kashmiri novelist, Shahnaz Bashir in an interview with Wande Magazine but “a question of duty.” Bashir’s fiction is set in the decade of the 1990s, where Kashmir saw a series of human rights crimes by the Indian armed forces, including incarceration and mass arrests of young civilian men. Claiming that it was aiming to curb militancy, the Indian military rampaged through the region, arresting and torturing Kashmiris on sight. Bashir’s first novel The Half Mother circles a woman’s life as she waits for her son, who is taken by the Indian army, to return. It reflects on the realities of many such women who are denigrated to “halves”—half wife, half mother—when their male family members are disappeared.

Daily life in Kashmir is such in which time can quickly jump from banal routine to torrents of grief, and its literature reflects this view of reality. In Bashir’s short story “The Transistor,” part of a larger collection titled Scattered Souls. a distraught Mohammad Yusuf Dar watches as a stray bullet pierces his beloved transistor—“Its remains, a soldered electronic chip connected to a naked speaker by a thin wire, lay scattered beside him, still blaring the BBC news.”

The Kashmiri writer undertakes a daunting task: to write within the landscape of an ongoing violence while exposing the other nuances of daily life.

In Kashmiri writing, adept, lucid descriptions for the region’s life emerge; its writers formulate deltas in language in which to express their sensibilities. In his essay, Under Siege, novelist Mirza Waheed writes of the things that Kashmiris will remember during India’s many persecutions. “The crunch of the military wheel, the callous thud of jackboots, and the impudent knock on the door continue to ring somewhere inside your head,” writes Waheed, referencing the siege of August 2019, during which Waheed, who is in London and cannot reach his family members, brings back memories from his own childhood in the 1990s in Kashmir. Waheed narrates the siege from a distance, calling it a “a stratagem designed carefully to humiliate an entire people.” Waheed’s writing on Kashmiri life is poignant; he shows that grief and solace are always moments away from each other while demonstrating that the Kashmiri always eventually finds himself ensnared by India’s imperialism. His novel The Collaborator also summons these themes. In one of its most vivid scenes, Waheed’s young protagonist investigates a mountain of Kashmiri bodies killed by the military. Searching the bodies for their IDs, he notes that there is “a profusion of tiny yellow flowers growing among the grasses here … In places, they have grown in great numbers among the fallen and decaying.”

The Kashmiri writer undertakes a daunting task: to write within the landscape of an ongoing violence while exposing the other nuances of daily life. In his book of short stories The Night of the Broken Glass, Feroze Rather deals with subjects of militarization, revenge, and caste; in A Curfewed Night, Basharat Peer talks of teenagers swept up in freedom movements. When truth itself is obscured by an outlying propaganda that serves the occupier’s interests, Kashmiri novels become a place to tread the narrow bridge between fiction and reality.

As the war rages on the region, many women writers have also come forth to tell their stories. In Sadaf Wani’s story “August, A River and Other Unmovable Entities,” she writes of a spirit looming over Srinagar, trailing and watching women as they roam the streets of their city, watched, criticized and taunted. “The road on the bridge is smudged by broken bricks and rocks, and some of the bricks have disintegrated to form an orange powder,” she writes, illuminating subtle details that reveal the volatility of her home. Wani’s story is filled with ingenious symbolism that tells of how women navigate a militarized urban space.

Kashmiri poetry also holds complex testimonies; Kashmiri poets write about embattlements, but also the landscapes that surround them, the seasons that change, the stories that are left to keep close. In the 1990s, Kashmiri poet Zareef Ahmad Zareef asked in Urdu, of the destruction of his homeland. “I have lost the city of love I had found. What frenzy is this?”

Inshah Malik asks a similar question in her poem “Rain and Dreams”: “What is this war called?/ When it rages both inside / And in the street.” In Malik’s work, the poet is reflexive, narrating verse in response to calamity and grief. Like Malik, other Kashmiri poets write about the internalization of the conflict, but also of new worlds. Poet and academic Ather Zia writes that “Friday is for Azaadi,” invoking the resonant Kashmiri chant for freedom from India’s chains. “In Kashmiri poetry, there is a sense of duress, but at the same time, pushing back against that duress.” says author Suvir Kaul in a podcast interview with Terence Sevea. If Kashmiri literature is about resilience, suffering and a stoic endurance, it is also about aspirations, desires, and the wish to illuminate the mechanisms of autonomy in the region.

Kashmiri writers work continuously within erratic systems of violence and surveillance. In 2018, Kashmiri poet Madhosh Balhami’s work of more than thirty years was lost when his home burned down in a gunbattle between armed forces and militants. In April of this year, Kashmiri journalists were branded as terrorists for doing their job.  It is not new that colonizers usurp histories and language, obfuscating lived experiences to serve their own interests. As India continues to oppress, emboldening its forces to entrap and subject Kashmiris, they write and fight back; in the art lies a deep defiance of India’s paternalistic ownership of the region, one that attempts to, but cannot, seize their minds.

What do Kashmiris want? A question is often asked of the people of Kashmir by Indians, but it is rhetorical as India’s opinions and plans for the region are executed in an echo chamber of its own prejudices. Kashmiri writing is proof that the answers to that question lie with Kashmiris, and only them.

Sharanya Deepak is a writer from and currently in New Delhi. You can find more of her work on her website: https://www.sharanyadeepak.com/

Protests, Poverty, Politics and Civil War: On Life Before the Beirut Explosion 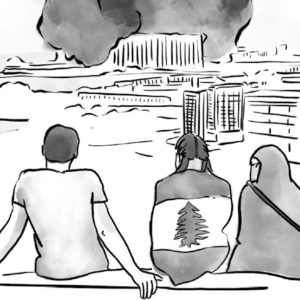 Protests, Poverty, Politics and Civil War: On Life Before the Beirut Explosion

The following was commissioned by The Delacorte Review. August 4, 2020 A bottle of water in my backpack, a cap on my head,...
© LitHub
Back to top