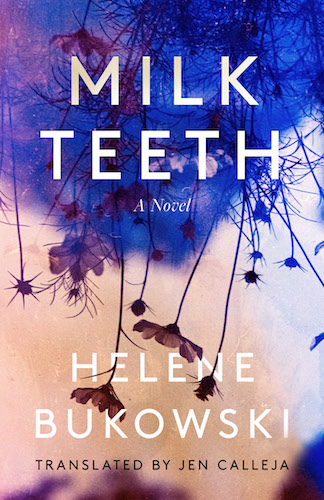 The following is excerpted from Helene Bukowski's novel, Milk Teeth, translated by Jen Calleja. Bukowski is currently studying creative writing and cultural journalism in Hildesheim. She is the co-author of the documentary film Zehn Wochen Sommer, which won a Grimme Special Cultural Award in 2015. Calleja is the author of I'm Afraid That's All We've Got Time For, Goblins, and Serious Justice. Her translation of The Pine Islands was shortlisted for the Man Booker International Prize 2019.

I walked through the forest. The pines stood in the last of the light. Time and time again I paused, tilted my head back, and looked up at the branches that cut up the sky with their rusty shapes. I oriented myself with the markings I had made an age ago. Crosses made in the bark with a knife. The resin made my fingers stick together. The scent stayed on my skin for days afterward.

I reached the clearing, an almost circular zone. Up from the ground grew grasses bleached by the sun. I slowly went into the center, where I had built branches into a den. It had been my first hiding place in the forest. Far enough away from Edith that I could talk myself into believing that she didn’t exist.

Stooping over, I entered through the opening. I saw that the wooden crate that I’d hidden here had been moved. Beside it was a bed made of moss. It smelled differently too. Someone had been here.

I opened the crate; nothing was missing. I took out one of the cigarettes and lit it. When I turned around, standing in front of the entrance was a child. We looked at each other. It was wearing a T-shirt that went down to its knees. Its feet were in overlarge sneakers, crusted with dirt. But the most remarkable thing was its hair. Red, as if ablaze. No one had hair that color in the territory. I stepped out of the den; the child backed away.

“What are you doing here?” I asked, lowering the hand holding the burning cigarette.
Without saying anything, the child walked past me, sat on the moss bed, and wrapped its arms around its knees.

I crouched down in front of the den. “You can’t stay here,” I said.

The child turned its head and furtively wiped its eyes. I stepped away from the entrance; it got up and came back outside. It looked around indecisively and fumbled with the hem of its T-shirt. I took a drag on my cigarette. The smoke was barely visible.

With its shoulders hunched, the child went to the edge of the clearing. Once there, it turned around and nodded. Only after it had disappeared among the trees did I understand that the nod wasn’t meant for me.

The child had bid farewell to the clearing, just like I did every time I left.

“Come back,” I said, raising my voice.

Nothing stirred. I called out again. The pines crackled in the wind. I stepped anxiously from one foot to the other. I was going to shout out a third time, when the child appeared again between the trees. It looked at me, waiting. I stubbed out the cigarette and stuck the butt in the pocket of my raincoat.

The child threw a look back into the forest. The darkness already stood behind the trees. Above us, the sky was losing its color.

“I live in a house not far from here. It’s safer there.”

The child leaned against the pine it was standing next to. I held out my hand. To my surprise it stepped out from the trees.

“Promise?” it asked. I nodded.

The child took my hand.

While we walked to the house, the child didn’t let go of my hand once. If someone had stood in our way, I would have knocked them down without thinking twice.

She stood in the doorframe wearing her black rabbit fur coat. Her greasy hair hung in front of her face. The circles under her eyes were dark violet, like bruises.

She hadn’t got up from the sofa in weeks.

“Where did it come from?” she asked, eyeballing the child, which I had sat on the kitchen table.

I shrugged my shoulders. Edith stood next to me. “None of the others have hair like that,” she said, “it can’t be from here.”

“How did you make it to this territory?” she asked the child. As she didn’t receive an answer, she turned back to me. “Can it speak?”

“What are you going to do now?” “It has to eat something.”

“When are you taking it back?”

“Back where?” “Back to the forest.” There was a silence.

“You really have lost your mind.”

“Anyone else would have done the same thing.”

Edith twisted her mouth into a sneer. “You don’t really believe that, do you?”

She turned to the child and asked it its name. Once again, she didn’t receive an answer.

“Meisis,” said the child, pointing at itself. Edith shook her head. “Sounds made up.” “I’m called Skalde,” I said. I looked at Edith, toprompt her. She cleared her throat and said her own name.

“Skalde, Edith,” Meisis repeated. We nodded. The light over our heads flickered. I looked at the window. The darkness had swallowed the garden. The kitchen was reflected in the windowpane. Edith and I, shoulder to shoulder, the child shielded by our bodies. We were standing very straight, like we weren’t afraid.

I now ask myself whether everything had already been decided in this moment. Had I not already surmised how this would turn out?

I shook my head, took a tin of evaporated milk from the pantry, opened it, and poured half into a glass for Meisis.

“You can drink it,” I said, passing it to her. Meisis brought it up to her mouth and took a sip. She wanted to give some to Edith, but she ignored her.

“I will most definitely not be bringing up another child, despite objections,” she said. “Are you talking about me?” Edith nodded.

I laughed. “Are you really saying that you brought me up?”

Edith took a step back. She had restored the usual distance between us. I waited for her to respond; instead she turned around, left the kitchen, and closed the door behind her. I could physically feel the silence that followed. It lay across my shoulders and my neck and tightened my muscles. From there, the pain grew right up to my ears. I started at the sound of a fly coming in through the window and buzzing. It bounced off the glass multiple times from the inside, tumbled and fell. Its black body twitched, then it was silent.

“You’ll get used to it, Meisis,” I said, not knowing what I meant. The child nodded and drank another sip of the milk.

I stood up and closed the window. Outside, the darkness was now absolute. I leaned my forehead against the glass and closed my eyes.

While I washed up, the child slept on the kitchen table, its head protectively buried in its arms.

“Come on, I’ll take you up to bed,” I said, drying my hands on the washcloth. I still remember how I marveled at how naturally these words passed my lips. As if it weren’t the first time that I had said something like that. I lifted Meisis from the table and carried her upstairs to the attic. There I took off her sneakers and laid her on the mattress, where she immediately went back to sleep.

I lay awake for a long time.

Time and again I turned my head and looked at the child in order to make sure that I hadn’t just made the whole thing up.

In the early hours I woke with a start. It was as if I hadn’t slept. Every muscle in my body hurt. I stretched, but it didn’t help much, I couldn’t find my way back into sleep, so I got up, sat in the gable window, and stared out it. Outside, nothing had changed.

MAYBE I LOST MY BALANCE A LONG TIME AGO.

I set up a room for the child on the second floor next to the landing. Edith had always discarded things there. Predominantly used crockery. I brought the gold-rimmed plates and cups back to the kitchen by the basketful. A small sofa bed with a blue cover was the only piece of furniture in the room. I brought in a dresser from the hallway. I rolled a swivel chair that had been sitting unused in the cellar up to the window.

She went to the window and looked out. I stood behind her. We could see the garden and the forest. I couldn’t find anything remarkable in the view, yet

Meisis didn’t look away. It was only when I carefully touched her shoulder that she turned back to me.

I also showed Meisis the rest of the house. We went in all the rooms. Sometimes she touched the walls, as if she wanted to feel what was underneath the wallpaper.

“Have you always lived here?” she asked me, pushing her hand inside mine.

“I like that, never changing place,” she said. I didn’t know how to respond.

In the evening, I asked the child if she would like to have a bath. I showed her the bathroom, and she agreed. I heated water and filled the bathtub to the top. It was so hot that the windows steamed up. I helped Meisis out of her clothes, and she climbed in. From the windowsill I passed her a dish holding the soap I had made from ash and the fat from the rabbits. Meisis washed her arms and legs with it and removed the layer of dirt from her skin.

“Hair too?” I asked. Meisis nodded. I picked up the porcelain beaker from the sink, filled it, instructed her to lean back her head, and emptied it over her. Then I took some of the soap and rubbed it into her hair. I told her that she should keep her eyes closed while I filled the beaker again and washed out the soap. I paused in motion, taken aback. I remembered that Edith had washed my hair the exact same way. I had intuitively taken on her hand movements. It hurt that I had almost forgotten the tranquil moments we’d had with each other. Meisis gave me a querying look.

“Close your eyes again, I’m not quite finished yet,” I said quickly, and washed the remaining soap from her hair.

After the bath I wrapped Meisis in a towel and carried her to her room. I tilted open a window. I could hear the insects outside. A moth bumped against the glass.

“Sleep now,” I told Meisis, covering her. As I was leaving the room, she reached her hand out toward me.

I accepted her request without hesitation.

I still know now that in that moment I thought, So now a child. I didn’t question my decision. Nor did I think of the consequences my actions would lead to. All that I concentrated on was the situation I found myself in in that moment. To wake up next to the child and hold her hand, as if I had never done anything else.

I'm still thinking about the boy who legally changed his name to “Trout Fishing in America.” 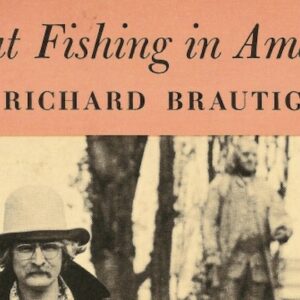