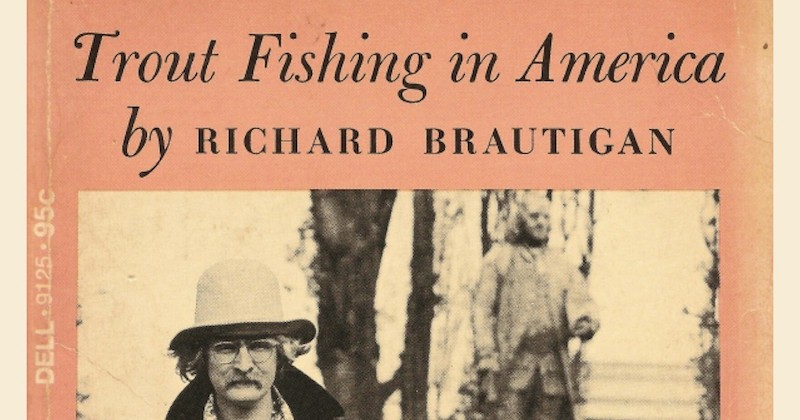 I’m still thinking about the boy who legally changed his name to “Trout Fishing in America.”

When Trout Fishing in America author Richard Brautigan insulted his friend, the novelist Thomas McGuane, at a party, McGuane responded: “You’re nothing but a pet rock . . . a hula hoop.” This type of accusation plagued Brautigan’s life; his mode of twisting and playing with language was deemed whimsical and unserious by critics and other writers, and he never achieved serious recognition from many of his peers. But—and this was part of Brautigan’s social problem—the dreamy style of his books was a huge hit with hippies and XX, including one young Brautigan fan, who legally changed his name to Trout Fishing in America.

When 17-year-old Peter Eastman Jr. went to court in 1994 to change his name to Trout Fishing in America, the judge warned him: “This may cause you no end of trouble in your life.” But Peter-now-Trout had a comeback prepared: “Most people say this is a cool thing.” And his father, who paid the $182 name change filing fee as a high school graduation present, supported him: “I am proud of Trout. The change in names has not interrupted our relationship. I will address him as Trout because that honors his choice.” (Model behavior for accepting your child’s name change!)

I really love that Trout did this; not only was he unabashedly moved by literature, but he used his name change as a method of claiming independence as a young adult. But Trout (or should I say America) is forty-five now; where is he? Though I couldn’t confirm this independently, several sources say Trout now teaches English at Waseda University—but there’s still much we don’t know. Is he still going by Trout, or has he reverted to Peter, or has he adopted the name of a newer book? (Craft World?) If you know Trout or are Trout yourself, feel free to update us. When you do, please refer to me as The Sore Throat & Other Poems.