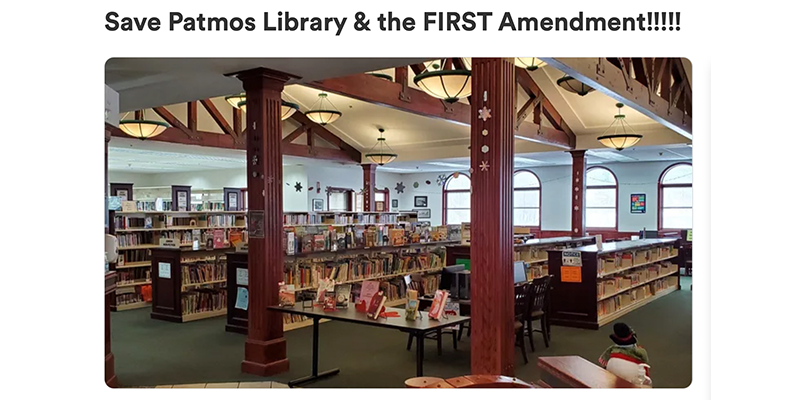 Residents of the Michigan town that defunded its library are rallying to keep it open.

Last week, Bridge Michigan reported that the Patmos Library in Jamestown Township, Michigan, had been defunded after a small group of residents tried, and failed, to have several books with LGBTQ themes removed. Now, a fundraising effort to help the library fill its budget gap has raised more than $75,000, with donations rising by the hour.

The library relies on a millage, or share of property taxes, for 84 percent of its $245,000 annual budget. A local vote last week removed that funding from the library following several months in which a group of residents complained about the presence of LGBTQ books, including Gender Queer, a graphic memoir by Maia Kobabe, Spinning by Tillie Walden, and Kiss Number 8 by Colleen AF Venable (illustrated by Ellen T. Crenshaw).

In a standing room-only library board meeting on Monday night, MLive reported, board members voted to “put a millage issue on the November ballot,” giving the library a chance to re-gain its budget. At the meeting, “Nearly 20 people, in total, from both sides – those who support the library carrying LGBTQ books and those who want them removed – went back and forth on the issue for about an hour during public comment,” Bradley Massman reported.

Meanwhile, a GoFundMe fundraiser, organized by Jamestown resident Jesse Dillman, is aiming to fill any budget gaps the library may experience in the meantime. The fundraiser has a goal of $245,000 and has raised more than 30 percent of that so far. Michelle Barrows, also a resident, organized a separate fundraiser, which has raised nearly $4,000 of its $200,000 goal.

After Monday’s meeting, Dillman wrote to residents who oppose LGBTQ books on GoFundMe:

At some point you need to reflect on yourself and admit to yourself and everyone else what is true. You DO want to ban books. You DO want to close the library. And you DON’T care about the well-being of the children and families of Jamestown. Because the well-being of children and families here is directly tied to the library. And the families and children have spoken. They’ve reached out to me, they’ve talked to the news, and most importantly, they showed up tonight and absolutely killed it. And our message was totally clear that we love and support the library.