Jessie Gaynor on the Perpetual Allure (and Trap) of Validation

When I was a kid, I wanted to be an actor. When I performed, adults told me I was good. I probably was, for a kid. Even other people’s parents told me I stole the show as a singing troll in The Hobbit, a Musical. I was no Anna Paquin in The Piano—I was so jealous when she won the Oscar that I had to excuse myself to cry—but I was a reader and an observer who could do a passable British accent, which is enough for a while. I went to arts camp and performed in community plays and in high school went full-on theater kid. (I don’t like to brag, but I saw Rent five times.)

As I got older, though, my talent hit a wall. I didn’t really get much better than I was at 12. I didn’t understand this immediately. Subtlety wasn’t my strong suit, but if a line was dramatic enough, I could sell it (see my work as: admitted fornicator at a prayer meeting, Lady Bracknell). Only when I started talking about applying to conservatory programs for college did my mother allow for some merciful pragmatism about my actual theatrical skill. You know what you’re really good at, she said. Writing. I should note that she now denies that the compliment was a pointed one (I should also note that she’s a terrible liar), but whatever her intention, I decided not to apply for any theater programs. In college, I registered for the first creative writing class I could.

I’ve heard this thing a lot, usually from writers whose work has been much validated: don’t be a writer because you’re looking for validation. To which my disgruntled teenager of an inner monologue replies: Oh, can’t I??? I know that this is good advice; it sounds like good advice, in the vein of RuPaul’s iconic Drag Race sign-off, If you can’t love yourself, how the hell you gonna love somebody else? It certainly sounds better than Become a writer if it’s the thing you’re best at because maybe you’ll be good enough for people to praise you for it, which feels great. There’s the advice that you nod along to and pass along, calling it your own, and then there’s the not-advice, the not-words, the urgent pursuit that feels like an impulse until it becomes an entire career, and eventually forces the question: What if I don’t even like writing. What if my true passion is praise?

I didn’t even feel like I was faking it—I really thought I loved poetry.

I assumed that if I were to be any kind of writer, I would be a fiction writer. While I had loved novels since Sarah, Plain and Tall, I had only ever read poetry for classes. I found it boring and deliberately opaque, like someone taunting me with a secret that wouldn’t even turn out to be very juicy. (Jessie Gaynor doesn’t care for bananas, pass it on.)

In my very first writing class, I wrote one poem and one short story. Unsurprisingly, they were both wooden and self-conscious. I used the phrase “ocular drought” in the poem, for one, which still hurts to admit. They were bad in a forgivable, first-try way, and I cringe, reading them years later, but I also feel tenderness toward my younger self. You overwrought dummy, I think, fondly. But my professor—a poet—liked the poem. Beautiful imagery, she wrote. (It wasn’t.)

Something else that hurts to admit: that was all it took. Maybe I don’t like fiction, I thought. Maybe I’m a poet. Maybe I love poetry. The kind of love where you don’t actually want to read it much—a distant fondness that’s still a fondness, like how old-timey rich parents felt about the kids they didn’t raise. I took more poetry workshops, and after the obligatory intro classes, I stopped writing fiction altogether. I applied to MFA programs in poetry. When I got into the Iowa Writers’ Workshop, I felt like I had done everything right. I had chosen to pursue the thing that came easily, the thing for which I was praised, and I had been rewarded. I didn’t even feel like I was faking it—I really thought I loved poetry.

At Iowa, I learned that any two words can rhyme if you claim it with enough conviction. I learned that funny wasn’t a compliment and reading fiction was bad and if you didn’t really get John Ashbery you should never admit it out loud. I learned that metaphors had to be real. I learned that I only liked poetry when it was a source of universal acclaim. I was miserable. I stopped reading novels entirely and carried around books of poetry, flipping through them listlessly in public, willing myself to feel moved.

I tried to write the kinds of poems that my peers and professors seemed to like. Sometimes it worked, and I was praised for poems that meant nothing to me. I dressed myself / Mercury, shaped with chicken wire—a line I have no memory of writing, but which I seem to have written. Invariably, everyone hated the poems I wrote that I actually liked, the ones about Meet Joe Black and Halloween decorations that are always trying to steal your bones. I didn’t trust myself to speak about anyone’s work, so I mostly stayed silent in class. I was jealous of the fiction writers, but I never tried writing any of my own. I was a poet, after all. If I wasn’t, then what was I even doing there? Why had I uprooted my life and moved to Iowa?

Once bitten by one professor seven years earlier giving the first story you ever wrote a lukewarm reaction, twice shy.

I remember the first time I said it out loud, walking with a classmate after another disappointing workshop: I don’t think I love poetry. I had been blinded by praise, and without praise I had to admit that while I respected poetry a great deal, I didn’t love it the way I loved fiction. If everyone in my program had liked what I had written, I might never have figured it out. It was an embarrassing thing to admit: I had oriented my entire life around praise.

After Iowa, I stopped writing poetry. I barely wrote at all. I didn’t have a reliable source of validation, for one, and anyway, what would I write? As the old saying goes, “Once bitten by one professor seven years earlier giving the first story you ever wrote a lukewarm reaction, twice shy.” When I finally wrote something, over a year out of Iowa, it wasn’t fiction or poetry; it was a short piece of comedy, for which I was validated with publication. I wrote more of them. I was good at it. I even liked it.

I didn’t miss writing poetry. I stopped thinking of my time at Iowa as a waste. It had undeniably made me a better writer, even if what I was writing wasn’t poetry. I didn’t (still don’t) think “familiar” rhymed with “horticulture,” but I had come around on metaphors—they’re much better if they’re real. I continued to wonder about fiction, though. I wondered for another two years before I actually tried writing my own.

I would like to say that I dove in without any infrastructure of praise, that I had learned my lesson about the perils of relying on others for outside validation. Alas, I forked over $500 for an eight-week workshop. The people in that workshop liked what I wrote, the beginning of a novel. They didn’t like all of it, and I hated the criticism as much as I ever had. I kept writing, though, even when the workshop ended. But what if no one ever wants to publish it? I think, wanting to give myself an out. Won’t you feel awful?

Absolutely, I will. I’ve been working on a novel for over a year, and I often feel terribly unmoored, wondering whether I’m wasting my time. Don’t do this for the praise, do it because it’s your passion sounds like great advice, but praise is always going to feel really good. If I had been really good at acting, I would probably be an actor right now. If I were really good at physics, I would probably be a physicist.

Some days when I write, I don’t feel like I’m doing it for anyone but me. Some days, the thought that someone, somewhere, might not like even one of my sentences makes me want to throw my laptop into the river, like a businessman who’s just realized there’s more to life than business. But I’m still writing, and I think it’s okay to acknowledge that the possibility of praise will always be part of why I do it. It’s not the whole of it, though—isn’t that great?

Jessie Gaynor is a senior editor at Lit Hub whose writing has appeared in McSweeney's, The New Yorker, The Paris Review, and elsewhere. Her first novel is forthcoming from Random House.
https://www.jessiegaynor.com/ 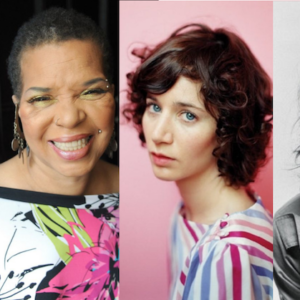 Joan Didion  In 1978, The Paris Review asked Didion if she had any writing rituals. “The most important is that I need...
© LitHub
Back to top