My first visit to the Louisiana Festival of the Book in 2015, it rained all day, hard. By the hour of my panel, there were few people left to see my appearance in the basement of the State Capitol. Not to mention, I’m a nobody in Louisiana (I’m a nobody in most places), so I was grateful anyone showed up at all.

It was here that I met a smiling, handsome, well-dressed man named Maurice Ruffin, a New Orleans writer who had been prolifically publishing essays and stories for a few years by then but had not yet sold a book. “That’s an auspicious name,” I told him as I shook his hand, although I didn’t know exactly why, except that it seemed of another era and classic. Later, when I looked up “Ruffin,” I learned the name had appeared as early the 3rd century and was associated with minor saints.

I moved full-time to New Orleans a few months later. Soon enough, I began to run into Maurice at parties, often while we were both hovering at the buffet tables, filling our plates. (When I asked him about his passion for food, Maurice said, “I worry that someone could net me by hanging a PB&J on a hook.”) In these small moments, we broke bread over and over again, and in time, I learned more about the 21st-century Ruffin.

Born and raised in New Orleans East, Maurice is a practicing lawyer, and, until recently, a restaurateur. (Pelican Bay, a restaurant he co-owned with his wife, closed in 2018.) He received an MFA from the University of New Orleans in 2013, and since then, he’s become an integral part of the literary community in town. He attends readings regularly, is a member of several writing collectives, and has written extensively about New Orleans in both his nonfiction and fiction.

Maurice is also the friendliest face in any room, which is its own particular kind of saintly behavior. He does both the work on the page and in the world around him; he is a good literary citizen. When he finally sold his first book, We Cast a Shadow, to One World, a rallying cry could be heard across the city. He is the first native born African American New Orleanian to publish through a major house. Hometown boy done good.

Out on January 29, We Cast A Shadow is a darkly funny, speculative novel set in the near-future South, in which a black father becomes obsessed with whitening the skin of his biracial son. It has received praise from Rachel Kushner, Kiese Laymon, and Roxane Gay, who called it, “An incisive and necessary work of satire.” I talked to Maurice via email about alternative careers, what writing means to him, and whether New Orleans is his muse.

Jami Attenberg: You’ve had a primary career as a lawyer for more than a decade, all the while earning your MFA, and publishing a prodigious amount of work. How do these two different careers speak to each other?

Maurice Ruffin: Fifteen years as a lawyer! Still blows my mind. Law school is a head trip in the best possible way. You really come out with a different way of viewing the world, an analytical mindset. And I’m not naturally all that analytical. Or at least I wasn’t. Law school made it much easier for me to tell what I’m seeing and much easier to argue untenable positions, if necessary. And arguing untenable positions is necessary to create characters who are not like me. Plus, being a lawyer increased my gumption. I’m much more likely to look at a daunting writing project and think: “It’s not a problem, I got this.”

I don’t see any separation between the city and me. I think most writers are trying to solve the mystery of their own lives, the awe that we feel when we look into the infinite.

Writing has made me a better lawyer because I tend to come up with arguments other lawyers don’t. Real left field stuff that makes the courtroom pause or laugh. No kidding, I once made an argument based on a “Three Stooges” skit. The judge loved it and ruled in my client’s favor. My grandpa used to keep “Three Stooges” videos for me to watch as a kid when I visited. It was a real circle of life moment.

JA: And did you always want to be a writer? When did you start to transition to being both?

MR: I didn’t want to be a writer as a child because I didn’t know that writing was a profession. But I did know that people wrote my favorite books and comics. I wasn’t sure that I could figure out how to do what they did, which may be why I turned to law.

Then I started writing in law school. Almost hypergraphia. I would literally fill folders with character sketches, setting descriptions, and plots, but not necessarily stories. I think I was training myself, like spending time on an elliptical.

When I went back to school for my MFA is when I got serious. But I’m a patient hunter, so the transition to both was as incremental as possible. I took independent classes, co-founded a writing group, traveled to conferences. And every time I did any of those things, I met some new brilliant person who helped me.

JA: Your book straddles genres. Do you see yourself generally operating in a speculative realm? What attracts you to this other worldliness?

MR: Sure. It’s definitely speculative fiction. But I think of it in terms of contemplation. This book came from looking at our lives on this planet today and wondering what would happen next. I’ve always been fascinated by the next as well as the way the past, present, and future dance with each other. Also, there’s an absurdity to racism that can be satisfactorily represented through the kind of hyper-realist fiction that appears in the book.

JA: What books did you read while you were writing We Cast a Shadow?

MR: So many books! I read a lot of great books that helped me figure out the voice of my narrator and the way he discloses information like Sacred Book of the Werewolf,  The Family Fang, Speak, Memory, and Pale Fire. Probably nothing had as big of an impact on my thinking as The New Jim Crow, which shifted my whole perspective. An old book called The Slave Power and Claudia Rankine’s Citizen had a similar role. I read a bunch of graphic novels (American Born Chinese, Fun Home, and Persepolis, for example) and nonfiction (Big Bang: the Origin of the Universe, The Prince [Machiavelli], and Picturing Black New Orleans) to keep my brain loose. I’m especially inspired by authors who got a late start in writing like Toni Morrison, George Saunders, and Mark Twain.

JA: I often think of that divide between writers who love to write versus those who love to have written. I get quite a bit out of writing from a self-entertaining perspective, beyond it being how I make a living and communicate with the world. When I was lonely as a child, which was quite often, I read and wrote to keep myself company, and it has carried over into adulthood. It’s the longest running show of my life. What do you get out of the process?

MR: Writing is a great form of personal entertainment and a bright defense against loneliness. More than anything, writing is illumination to me. I don’t really know what I think or feel until I write it. Each epiphany is a door to a better version of my life. To paraphrase Joanna Newsom, I get to open all these doors and I don’t even need to unlock them. The whole process is peak fun. It’s gratifying to know myself and the world with so more clarity thanks to writing.

JA: My impression of you is that you’re super supportive of your peers, generous with your time, participatory in events, and workshops. I see you at all the events, and I can tell from Instagram that you’re at quite a few more than I am. I think coming from New York and moving down here I was at first wary of diving deep into the reading scene because it can end up feeling like a part-time job, but I really appreciate how tight everyone here is, how supportive they are.  What does being a part of a writing community mean to you?

MR: I always admired New York because that’s the center of publishing. I’ve got family up there and considered moving, in part, because I couldn’t find a writing community here when I was younger. But then Katrina happened and all those waves and gusts churned up the soil, I guess. I’ve watched this garden grow these past 15 years, and it’s a beautiful thing.

My writing groups, the festivals, the reading series, the reviewers, the professors, and random artsy people who populate New Orleans made it possible for me to publish a novel. So I support them all as much as I can. There’s not a lot of competitiveness or grandstanding down here. We’re bohemians who love to create because creating is fun. And we’re really doing it down here.

JA: The city appears to me to be one of your primary subjects. Is New Orleans your muse? Is it a problem you’re trying to solve? Do you have a vision for what you want people to feel about this city, or a message you’re trying to send out about it? Because it’s such a complicated place.

MR: I don’t see any separation between the city and me. I think most writers are trying to solve the mystery of their own lives, the awe that we feel when we look into the infinite. I really wanted to get the hell out of New Orleans when I was younger. I’ve written about that. Everyone wants to escape and find the gold over the rainbow. But New Orleans is precisely what you find on the other side of the rainbow. This community is so rich with story, conflict, love, and redemption. All the stuff of the best art. I’m lucky to be from here.

A State-By-State Survey of Literary Masterpieces 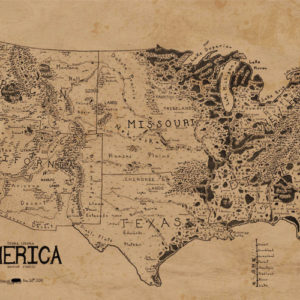 A State-By-State Survey of Literary Masterpieces

Probably not all offices have regular arguments about which states are the most literary. Or maybe they do. In any case,...
© LitHub
Back to top