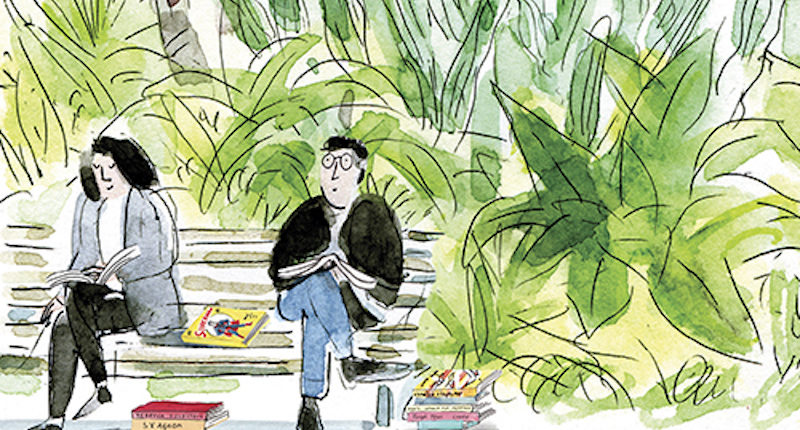 From Lispector to Jodorowsky, a Literature of Resistance and Dreams

As a young man, I thought of Latin America as a place left unfinished at the moment of creation. To me this was a handicap: time was slow; space always gave the feeling of being elastic; and things worked in peculiar, idiosyncratic ways. Now I appreciate these qualities. People in the region are convinced that reality and dreams are impossible to separate. That spirits dance around the living. And that inanimate objects have a soul of their own. I agree.

Literature has been a superb medium to explore this supernatural life. Consider Gabriel García Márquez’s masterpiece One Hundred Years of Solitude (1967). In the novel, there are rainstorms of butterflies; entire towns mysteriously lose their memory; and beautiful women ascend to heaven. In Latin America, these occurrences are neither strange nor uncommon.

Being Jewish and Latino means having a double entry to the world of the unreal. Jewish folkloric tradition also contains an extraordinary gallery of chimeras: dybbuks, golems, and a vast assortment of angels and demons. We even have the brilliant Chelemites. In Mexico City, where I grew up, these chimeras often interacted with local ones—like La Llorona, the wailing woman, and El Coco, a faceless ogre.

The literature of Jewish Latin America is an endless well of possibilities. The map below gives a taste of the books that have been written or translated into English, and there are many others in the canon still. 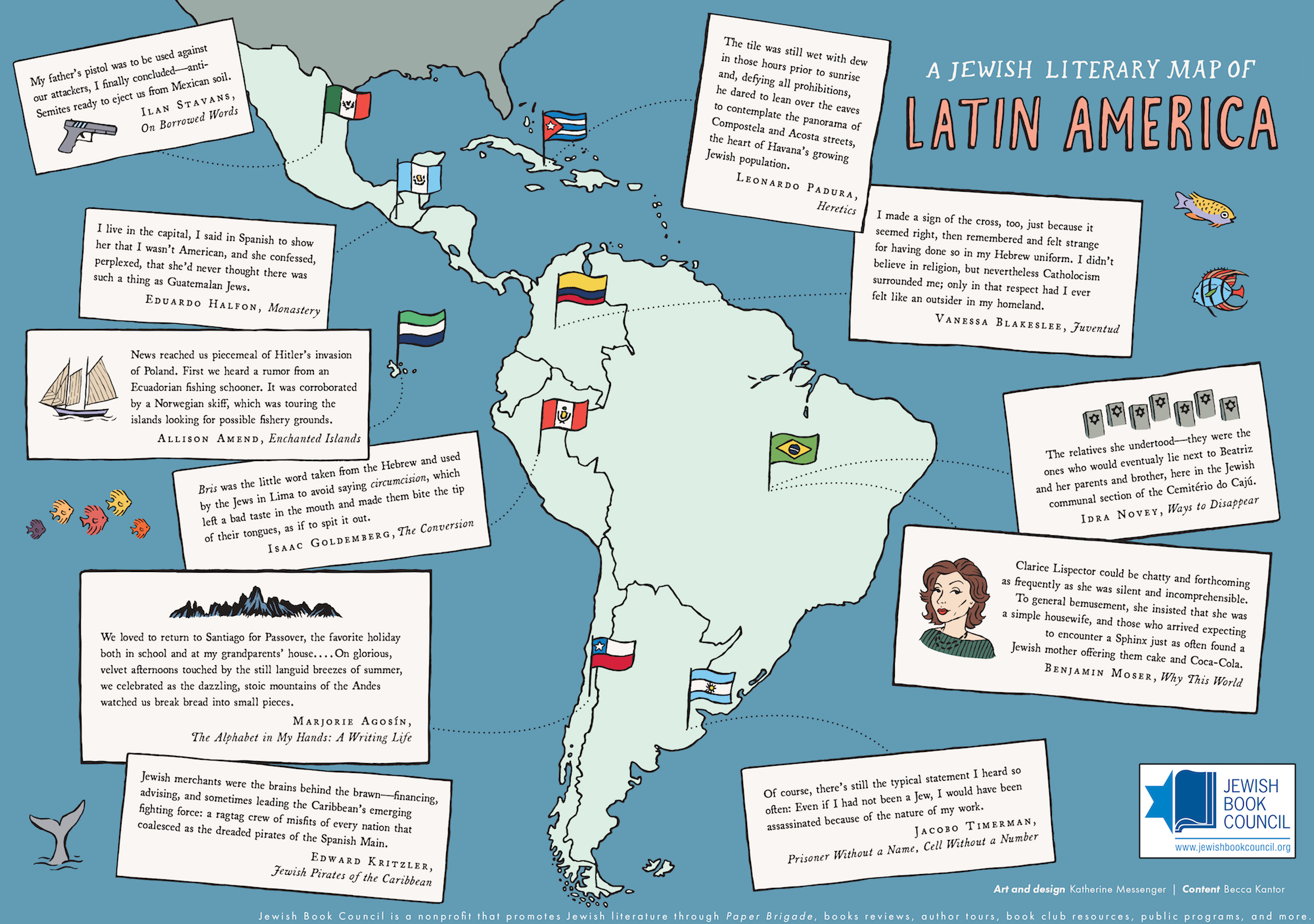 Art and design by Katherine Messenger · Text by Becca Kantor

Jews arrived in the Americas in 1492, as La Convivencia—the coexistence of Judaism, Christianity, and Islam—was concluding. In other words, we came to life in an explosion of xenophobia. That xenophobia has followed us like a shadow. First, the Inquisition targeted us; we had to hide our identity and fortify it through secrecy. My favorite colonial testimony on crypto-Jewish life is Luis de Carvajal the Younger’s memoir. It chronicles his perilous awakening to the Hebraic faith in the Mexico City region in the second half of the 16th century and how the Inquisition ultimately burned him at the stake in the largest auto-da-fe ever performed on this side of the Atlantic.

Intolerance greeted us again later as we emigrated from two distant regions: Eastern Europe and the crumbling Ottoman Empire. Among the most lucid literary works about immigration is Alberto Gerchunoff’s The Jewish Gauchos of the Pampas (1910). In enchanting vignettes, Gerchunoff details the process of acculturation in agricultural colonies in Entre Ríos, which were seen as harsh and unwelcoming.

The quintessential motifs of Jewish Latin American literature are repression and exile. But there is another constant: resistance. This was particularly clear in the works that emerged during the Dirty War of the 1970s. Children of immigrants and Holocaust survivors were active against the military juntas of South America. As a result, they represented a high number of desaparecidos—the disappeared. The most distinguished account of that period is Jacobo Timerman’s Prisoner without a Name, Cell without a Number (1981), which describes Timerman’s imprisonment by the Argentine junta and points to the way in which his torturers were similar to the Nazis.

Timerman is blunt, passionate, and relentless in his quest for justice. Another response is escapism. A slew of magical tales by writers like Alejandro Jodorowsky survey the limits of the surreal. My dear friend the Brazilian fabulist Moacyr Scliar wrote what strikes me as the best novel in the Jewish magical realist genre: The Centaur in the Garden (1981). Joyful and thought-provoking, it is about a Jew who is half horse, half man, and finds no peace in either the animal or the human realm. While Scliar’s depiction of his native Rio Grande do Sul has much in common with Franz Kafka’s Prague and Isaac Babel’s Odessa, it is a universe all to its own, with bizarre laws and phantasmagorical characters.

I recommend two other inimitable “Jewish” writers. I put the adjective in quotes because one of them never fully acknowledged her Jewishness and the other spent his life hoping he could prove he was a Jew. The first is Clarice Lispector, who was also Brazilian. A subtle realist, her striking voice is evident in masterpieces like The Hour of the Star (1977), where biblical allusions give way to a haunting meditation on alienation. The other is the Argentine hombre de letras Jorge Luis Borges. He nurtured a lifelong passion for Kafka, Spinoza, Hasidism, and Kabbalah, evident in stories like “Emma Zunz,” “The Secret Miracle,” and “Death and the Compass,” as well as in memorable poems and essays.

The best way to read Jewish Latin American literature is by suspending rationality. For my next book, I spent the last four years traveling to the far corners of the region. I’m more convinced than ever that this vast expanse of land is indeed a place left unfinished—and that’s its biggest asset. Jews are among its most fertile and stylized dreamers. 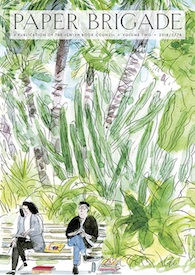 Ilan Stavans is the Publisher of Restless Books and the Lewis-Sebring Professor in Latin American and Latino Culture at Amherst College. He is the recipient of numerous awards and honors, including a Guggenheim Fellowship, Chile’s Presidential Medal, and the Jewish Book Award. Stavans’s work, translated into a dozen languages, has been adapted to the stage and screen. He hosted the syndicated PBS television show Conversations with Ilan Stavans. He is a cofounder of the Great Books Summer Program at Amherst, Stanford, and Oxford. His book Quixote: The Novel and the World is out now from Norton.
Share:

Beyond Fan Fiction: Rewriting and Distorting The Shining 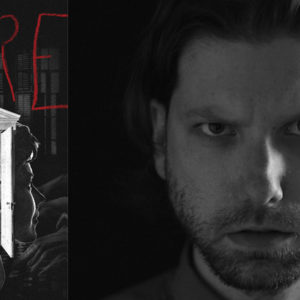 Beyond Fan Fiction: Rewriting and Distorting The Shining I first heard about Lonely Christopher’s novel THERE from the author Joshua Furst who was Lonely’s teacher when the manuscript...
© LitHub
Back to top
Loading Comments...