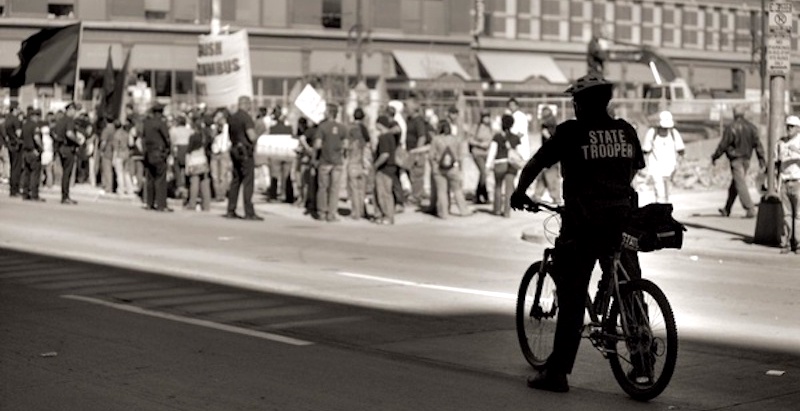 I became a citizen of the United States on the eve of the invasion of Iraq, holding my newborn daughter. Sitting in a room at the University of Maine, I listened to a speech made by an administrator who spoke not of the benefits of citizenship but of its responsibilities: to participate in civic engagement, to vote, to speak out against injustice. There was a note of despair to the address, in that way things sound when we speak of what we hope will happen while being fully conscious of the horror of what is actually going to come to pass.

“Why do you want to become a citizen?” I was asked this by a local TV reporter as I strode in my sari to cut a large chocolate cake decorated to resemble the American flag—not because I had been appointed to do so but because everybody else seemed too nervous to disrupt the red, white, and blue. “I want to demonstrate what it means to be a citizen,” I replied. “I want to give my American daughters a model of citizenship where pride in one’s country does not absolve one of working to mend its ills.”

All these years later, I find that my answer to the reporter still stands. I have a deep allegiance to Sri Lanka, the country where I was born, and the call-and-response of America, where I now live, comes to me as a responsibility. To teach my daughters the same loyalty to the land of their birth that I feel for my own, I have to let the country where I have raised them get under my skin. In the face of overwhelming evidence of my love for Sri Lanka, I must demonstrate my love for America in ever more meaningful ways.

Love for a country must surely carry with it love for its many parts. To claim love for this country and yet care not a whit for the public education of other people’s children, or the fate of young people too poor to have any other choice but to risk their lives at war, or the abandonment of people whose skin color marks them for a lifetime of injustice, is to exist in a vacuum where you possess but a superficial understanding of those two words: love, country.

As a Sri Lankan, I grew up understanding that what is given freely must still be earned.

And, so, I have discovered that love is a responsibility that has little to do with rights. I have listened, time and again, to Americans who can quote the First, the Second, the Fourth, and the Fifth constitutional Amendments. Rarely have I heard my fellow citizens speak up on behalf of the other amendments—the Thirteenth, the Fourteenth, and the Fifteenth, for instance, crafted to ensure dignity, due process, and equality, respectively, whose language speaks to the creation of the perfect union that we all seek and requires us to make a more nuanced reading of those other, more popular amendments.

An interpretation of rights unrelated to responsibility does not speak to me of love of country or of patriotism. We live among others in a social agreement where the laws governing our rights provide a guide to the responsibility each of us has toward others. Those laws should be the last resort in our interactions, to be summoned when all conversation is spent, when all negotiation is done—in other words, when we are broken.

As a Sri Lankan, I grew up understanding that what is given freely must still be earned. A free education must be earned by upholding respect for education and rigorous intellectual pursuits. Free health care must still be earned by the purchase and consumption and, if possible, the cultivation of native vegetables, fruits, and herbs. The freely given affections of parents and grandparents and extended family must be earned by a willingness to tend to the elderly, a consideration for the dying, and the transmission of those values to a younger generation.

The freedoms that Americans are so quick to mention are no different. They, too, ought to be earned. We ought to deserve them, somehow. That somehow, to me, does not come on the wings of a recitation of the Pledge of Allegiance, but on the heels of attentiveness to the work that must be done in any neighborhood, in any community, in any state, in any given moment.

As I teach my daughters the American anthems that my own mother taught me to sing long before this American life came to pass, I favor less the bombast of “The Star-Spangled Banner”; rather, it is that other anthem of a beautiful country that I sing most often. And, perhaps, because words are the foundation of my life, my daughters can hear in my voice the note of care that accompanies the celebration of a bountiful nation, to mend our flaws, to confirm our souls in self-control, to refine our goals, to ennoble our successes, to ensure that selfish gain no longer stains the banner of the free. Perhaps most of all, I hope that they hear in those words the reminder that we are asking for, not demanding, the grace that might bring us the brotherhood we still lack, and that I commit to, as I expect them to do, making beauty possible.

Streets in small towns and big cities have been filled with dutifully masked people who’ve shared hand sanitizer, home-cooked food, extra masks, and water as they’ve called for the dismantling of racist institutions.

This past June, I found myself walking down a highway with that newborn I had held while being sworn in long ago. She was there, now seventeen, along with one of her older sisters, several of their friends, and thousands of Philadelphians demanding an end to police violence. In a single afternoon she witnessed the dream articulated by a constitution that gave her the right to speak on behalf of brotherhood, itself evidenced by the fierce solidarity of those around her. She also experienced a state-sanctioned assault in direct opposition to that constitutionally guaranteed right, with weapons banned by the Geneva convention even in times of war; an atrocity that generated an international outcry. On the one hand, beauty, on the other, what must change. A right directly related to responsibility.

Among the regular speakers at Black Lives Matter rallies in Philadelphia is Mike Africa Junior, a father of four who was born in prison to wrongfully convicted parents who were jailed for forty years. He is also a spokesperson for the Black-liberation organization MOVE, which was bombed by Philadelphia police in 1985, killing six adults and five children, incinerating sixty-one homes, and leaving more than 250 Philadelphians destitute, a precursor to the attack that took place against us on June 1, 2020, on that highway. “There is so much injustice in this country,” he said, standing in Malcolm X Park on June 13, after a march that wound through West Philadelphia thirty-five years after the MOVE bombing, “that we the people are forced to step into the streets to fight for justice in the middle of a fucking global pandemic.”

Streets in small towns and big cities have been filled with dutifully masked people who’ve shared hand sanitizer, home-cooked food, extra masks, and water as they’ve called for the dismantling of racist institutions. My daughters in Philadelphia and in Denver are among them, all acting in flagrant defiance of a curfew designed to stifle dissent. On July 4th they were at another rally calling for the freeing of the wrongfully detained, and the reallocation of resources earmarked for a brutal police force to community-building initiatives, to schools, and to the arts instead. It does not escape my notice that my daughters live in wealthy townships where they are afforded all those things in spades in and outside their schools. Their presence on the streets on behalf of their fellow Americans is the real testament to the strength of their citizenship.

I come full circle now, remembering the oath I made at that long-ago ceremony, and the words I spoke to the reporter after. I look at my daughters and I see that I have done what so many immigrants did before me: passed on a necessary fire in service of the real American dream of equality. I watch it burn in their fearless hands.

From “Many Rights, Few Responsibilities” (Fall 2020 Issue) by Ru Freeman. Used with the permission of Virginia Quarterly Review. Copyright © 2020 by Ru Freeman.

What Exactly Do We Mean By a Book? 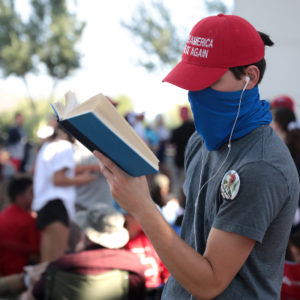