In April of 2010, I walked into New York’s Penn Station and boarded a train south. I’d been granted the Virginia Center for the Creative Arts’ Wachtmeister Award for my playwriting: a free residency. My next play was still beyond reach—too early in the research process to start scripting scenes—so this retreat would be the perfect opportunity to begin that novel. My first. The idea (the book’s climax) had come to me the summer before but, interrupted by new play inspirations, I’d delayed any serious work on the book. My first morning at VCCA, I strolled to my studio, arranged my desk, and pulled out a new composition book.

Oh my God. Oh my God! am I insane? Who told me I could write a novel? Suddenly I understood the real reason I’d postponed this project: I DON’T KNOW WHAT I’M DOING. I stared agape at the narrow-rule blank page, at the empty walls, at my laptop calendar highlighting the residency duration: 21 DAYS.

And then a minute later, or an hour, or in a mad rush before the lunch break I began putting pen to paper. Something was coming, and I kept the ink scratching: no judgment. Three weeks later, my longhand scrawl transferred to my laptop, I’d produced 80-odd double-spaced pages, and recognized I was in it now: this foray into fiction.

Many playwrights contemplate novel writing, but most are reluctant, intimidated by the prospect of generating so many pages (a typical play is just around a hundred typewritten, with lots of spaces) or, more often, by the notion of formulating narration: all that text outside the quotation marks. For theatrical authors, “exposition” is a four-letter word, an accusation that the writer is cheating by forcing information into the dialogue that feels unnatural to the character or to the world of the play (even if that world is absurdist). It’s a challenging feat to provide all necessary backstory, unspoken interrelationships, and character inner life via dialogue only or, more accurately, via the spoken words buttressed by multiple layers of subtext. Complicated but, as with all writing, the process is less methodical than intuitive. For those of us, then, who have spent years or decades telling our stories within these constraints, being granted the freedom to explore a character’s unspoken thoughts, to provide information beyond the confines of characters’ conversations or even beyond their knowledge, can feel overwhelming: Fear of the Overwrite.

While still spitting out the first draft, I visited my friend playwright Naomi Wallace in the English countryside, and one afternoon she drove us to the nearby Brontë Parsonage Museum, spurring me over the subsequent weeks to engage in a personal Brontë reader marathon.

I was teaching myself to write a novel, which is to say I was unlocking from lifelong memory-storage the guidance of my real teachers: every novelist good or bad in whose work I’d ever indulged. But Charlotte Brontë’s gift came to me quite consciously. Governess Jane—at the behest of employer/future-love-interest Rochester—ventures downstairs to the party where Rochester’s rich guests are chatting, Jane trying to disappear in a corner window seat. None of the visitors speak to her directly, instead entertaining themselves with anecdotes of the various ways they as children tortured their own governesses.

As the cruelty prattles on, we as readers are seething, dying to get back to Jane, How’s she taking all this? till finally she slips out into the corridor hastily followed by Rochester, and it is through his words that we discover she’s crying. By withholding Jane’s reaction until the scene’s climax, Charlotte dexterously allows the reader to take on Jane’s rage and humiliation, a powerful empathic experience, and from this I grasped instantly a profound lesson. The narrative is not about spoon-feeding my readers material that easily could have been provided subtextually in the verbal exchanges. Rather, with novels, as with plays, the work is most effective when the audience is an active participant. My challenge was to provide readers with just enough emotional information, in and outside the dialogue, and let them bring the rest.

But subtlety and brevity are not synonymous. For the theatre, I’d written with an instinctual restraint lest a play go on for five hours, but it hadn’t occurred to me there would be limits with a novel. When I began to share the 1,400 double-spaced pages I’d produced over 14 months with a few trusted individuals, including Naomi and my own “Brontë” sister, author Kara Lee Corthron (The Truth of Right Now), I expected to hear ideas for cuts. A few came, but most of the notes were requests for more: the subsequent draft sprouted another hundred pages! At its most swollen Castle Cross weighed in at 354,978 words, equivalent to Anna Karenina in translation. (Ultimately I cut twenty percent on my own, the remainder pretty much the final 789 published pages.)

At a recent holiday party, I spoke with a man who had written an unpublished novel as well as plays. He’d come to the conclusion that playwriting made more sense in terms of time management: a play he could grind out in a matter of weeks (true, though some plays have much longer incubation periods) whereas his novel occupied all his creative energy for two years. For me, the project defines the form. I’d wanted to examine the developments in four lives that culminate in a particular momentous event, and that felt like a larger story than that which could be portrayed in a two-hour stage experience. I should say, it was not part of the original plan for the book to become epic. As a fiction naïf, I hadn’t anticipated just how comprehensive, and penetrating, my exploration would go.

So far, in fact, that while still penning the first draft, I suddenly realized I had unwittingly fallen in love with one of my four protagonists. I don’t mean I had affection for my character in the way many of us do, and as I myself have many times with people I’ve created for the stage. I’m talking about silly, embarrassing, romantic crush-love, and that had never happened before, but then again I’ve never gotten to know any of my theatrical characters so well.

I’ve written plays whose stories spanned a few weeks, or years, or centuries or are in absolute real time wherein a 40-minute one-act encapsulates exactly 40 consecutive minutes of the characters’ lives. Whatever the dramatic duration, the audience, and I as writer, are exposed only to a snapshot of a life: my play Breath, Boom covers 16 years but we only experience about 120 selected minutes of girl-gang protagonist Prix’s life. With Castle Cross, on the other hand, we meet the main characters in their youth and live with them throughout their lives. Further, with stage characters my focus is on their inner beings while painting their physical selves with a light brushstroke. Once the actor meets basic requirements (gender, age, race—and in the 21st century, some writers are flexible with those), the paramount task in casting is not about looks but rather in finding the strongest actor who demonstrates an understanding of the character’s personality, passions, pain. By contrast, with my novel the characters are fully fleshed right on the page: heart and soul as well as height, weight, skin complexion, hair texture.

Speaking of actors. Theatre is a collaborative art. The written play is in effect a blueprint, the characters on the page mere abstractions until they are embodied by actors guided by a director inhabiting a physical world imagined by set, costume, sound and lighting designers at a venue provided by producers, not to mention the stage manager, propmaster, etc. If the script is strong and all the aforementioned gifted, committed individuals in service of that script, the result can be breathtakingly riveting theatre. The flip side: when things go wrong, a brilliant play can be destroyed by the onstage disaster. Fiction, by comparison—barring a dreadful experience with a “miscast” editor—is not contingent on a sea of middlemen but rather a gloriously direct, intimate relationship between writer and reader.

Recently I ran into a colleague at the theatre, director Sturgis Warner, who informed me he happened to be just 20 pages shy of finishing my book. Novelists are not privy to the moment-to-moment reader response as playwrights are with audience members, so catching Sturgis while he was still living in the novel provided some semblance of that electrifying instant gratification. (My theatrical impulse for such immediacy likely informed my choice to write the book in present tense.) Sturgis’s comments were very kind, and he remarked that my novel felt like it was written by a playwright. I presumed he was speaking about dialogue, but his reference was to the Aristotelean dramatic structure of many chapters and of the book as a whole: conflict, rising action, climax.

Playwrights aren’t the only authors wary of genre-hopping; I’ve met a few novelists who feel likewise regarding undertaking a play. Despite my elaboration on the differences I’ve observed, in the end I’ve found many more similarities in writing for the stage and the page, starting with the kindred courage to put yourself out there and spawn that virgin draft: something to work with, to revise and shape and hone. All writers have gifts we can carry from one discipline to another. Approaching a new form should not be paralyzing but, on the contrary, an opportunity to marvel at all that our life, and literary, experience can bring.

Kia Corthron’s fiction debut, The Castle Cross the Magnet Carter (Seven Stories Press), was the winner of the 2016 Center for Fiction First Novel Prize. As a playwright, her body of work has garnered the Windham Campbell Prize for Drama and other awards, and she is the 2017 resident writer at Chicago’s Eclipse Theatre, which produced three of her plays. She’s also written a few episodes for television (The Jury, The Wire). 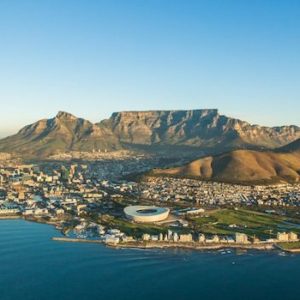 “Don’t let anyone tell you that apartheid has nothing to do with South Africa now. Those roots run deep and tangled and we’ll...
© LitHub
Back to top