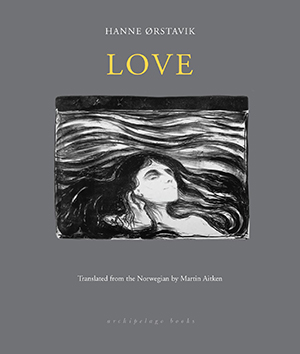 The following is from Hanne Ørstavik's novel, Love. It's the day before Jon's birthday, but his mother Viebke is so preoccupied with thoughts of a new man in her life that she's completely forgotten. In 2006, Love was named one of the best Norwegian books of the past 25 years by Dagbladet. Hanne Ørstavik has written several acclaimed novels, including The Blue Room.

In his school bag is a book of raffle tickets for the sports club. When he’s finished his dinner he’ll go around the houses he can see in the photo to sell some tickets.

Vibeke gets to her feet, clears the plates and glasses and puts them on the counter. Jon kneels on his chair and leans forward across the table, she can see he’s trying to harpoon the last of the sausages with his fork. He tells a funny story he’s made up about a man who throws himself out a window and never reaches the ground. She doesn’t think his stories have a point. He stabs at the sausage, lifts it up and breaks it in two, offering her half. She smiles. They always eat the last one the same way, on its own. He lingers, resting his weight on his elbows as if waiting for something. He tells her about a picture he’s seen in a magazine of someone being tortured, a man suspended above the floor with a hood over his head. His arms are tied to a pole with some rope, he’s been hanging there so long his arms feel like they’re about to be torn from his body, says Jon. Can’t you just go, she thinks to herself. Find something to do, play or something?

“It’s good of you to think of those in pain,” she says. “If everyone else did the same, the world might be a better place.”

She reaches out and smoothes her hand over his head.

“Have you made any friends yet?”

His hair is fine and soft.

She repeats the movement while studying her hand. Her nail polish is pale and sandy with just a hint of pink. She likes to be discreet at work. She remembers the new set that must still be in her bag, plum, or was it wine; a dark, sensual lipstick and nail polish the same shade. To go with a dark, brown-eyed man, she thinks with a little smile.

Jon gets his school bag in the hall. He takes out the book of raffle tickets from the little pocket at the front where he puts his packed lunch. He puts on an extra pair of socks before doing up his grey boots. He puts on his coat and blue scarf. His woolly hat. He looks at himself in the mirror. He tries to stop it but he can’t. He feels in the pockets of her coat. Among the receipts and an old bus ticket he finds some money. He shouts from the hall to say he’s going out.

He opens the door and stands there on the step for a moment. He can feel in his nose when he breathes in how cold it is.

Jon passes along the length of Vibeke’s car. He pauses, wedges the book of raffle tickets tight between his knees, scrapes a handful of snow from the trunk of the car and presses it together in his palms. It’s a poor snowball, dry as powder. He blows it from his mittens, then claps them together, a crisp, loud report. Sounds become so weightless in the cold. Everything does. As if he were a bubble of air himself, ready at any moment to float into the sky and vanish into the firmament.

He takes the raffle tickets in his hand, crosses the road and walks up the little path the old man has cleared in the drive. The snow crunches under his feet. There’s a lean-to by the front door with firewood stacked up under the pent roof. Snow has blown in between the logs. The outside light is switched off. Jon finds the doorbell. He presses it, but can’t hear a sound. Everything’s so still, he thinks to himself. But then the old man opens the door, so abruptly it makes him jump.

“Would you like to buy a raffle ticket?” Jon asks, holding out the book. “It’s for the sports club.”

The old man looks at him, his eyes then darting toward the road. It’s been a while since a car came by and it’s too cold for people to be going about on foot. He gestures for Jon to come inside. He closes the door after him and goes through another door into the house itself. Jon stamps the snow from his feet and follows on.

They enter a living room with a small kitchen area attached. On top of the kitchen counter is a small television set. There’s a black-and-white film on with the sound turned off. The old man shuffles over to a wood burner and bends down stiffly on one knee. He puts a log into the fire, wraps his hand in his sweater and opens the vent to a crack, then turns around and smiles at Jon.

“That should keep it going for a bit. Can’t have people freezing when they come to see the old crow.”

A rocking chair by the window is still faintly in motion. He must have been sitting there when the doorbell rang, Jon thinks to himself. Maybe he saw me coming.

“The sports club, you say.” The old man wanders over to the counter and pulls out a drawer. He asks how many tickets Jon’s got and what they cost. Jon tells him. He takes out a wallet and says he’ll buy them all. He writes his name in the book and puts a ditto mark in curly brackets on all the stubs. It takes him a while. Jon glances around.

“The place smells rank and strange, Jon thinks it smells of soil. The man stops at a door at the end. He turns toward Jon, his hand on the handle.”

Three oval photo frames hang on the wall above the rocking chair with old portraits in them, the photos are the kind that are blurred at the edges as if the people in them are fading away. In a corner of the kitchen area is a fishing rod. Jon wonders if it’s a fly rod. Last year Vibeke had a boyfriend who said he would teach Jon to fish with a fly. Just the two of us, he told him, guys together. He took out a map to show him where they would go, showing him where the river ran and

describing the various pools. There, he said, you’ll catch a big one there. He looked up at Vibeke with a smile. But then one day he was gone. Jon hadn’t even heard them argue.

The old man turns toward him, handing him the raffle book and the money.

“Yes. We came four months and three days ago.”

Jon puts the money and the book of stubs in his bag. He feels glad.

“And already out and about selling tickets, eh? They know how to put you to work in that sports club.”

Jon says he’s only just joined so he can start skating.

The man’s hair is white as chalk, long, thin, and untidy. His face looks flushed, Jon thinks to himself, as if he just woke up.

“Let me show you something,” he says.

He tries not to blink.

He opens a door and flicks a switch. A lightbulb goes on, fixed directly to the wall. Jon sees a flight of stairs leading down into the basement.

Vibeke goes to the bathroom and stares into the mirror. She can tell from the way she looks it’s been a good day. She feels glad and full of bounce. At one with herself. A tiny crystal twinkles from the right wing of her nose. She winks back.

My lucky star. She picks up a brush and bends over until the long, dark mane of her hair nearly touches the floor. At first she brushes with care to remove the tangles, proceeding then with gentle, sweeping strokes from the scalp. She tosses her head back when it’s done. She wants her hair to look like a cloud caressing her face. She looks in the mirror. It lacks volume, and wayward strands strive toward her forehead. I could go to the library, she thinks to herself. Normally she keeps the library until Saturday, and today’s only Wednesday, but she’s already run out of books to read. She decides to take a bath first and wash her hair, treat herself.

Jon follows the old man down the stairs. They’re steep, the man takes one step at a time and there’s a thick rope he holds on to at the side like a banister. At the bottom they go through a little passage, a mat of artificial grass covering the floor. The place smells rank and strange, Jon thinks it smells of soil. The man stops at a door at the end. He turns toward Jon, his hand on the handle.

She takes off her clothes while she runs her bath. There’s no bubble bath left in the bottle. She takes a cotton bud from a box on the shelf and removes her nail polish with some remover. She waits until it’s nearly full before turning the tap off and climbing cautiously into the tub, water sloshing over the side. She feels the goose pimples as they appear on her skin, her nipples harden and a tickle runs down her spine. She lowers herself gently down. Such bliss to immerse the body in hot water, she thinks to herself. Bliss, in every respect. And then she lies there, motionless, savoring every second.

There’s a daybed up against the wall, and shelving full of old wooden boxes from floor to ceiling. The room smells of dust and mold. Jon thinks maybe the man’s got a collection of old model trains, the first electric ones in Europe. He feels a need to pee. The man crosses the floor to a shelf, pulls a box out from the middle and dips his hand inside. A leather dog collar and a metal chain hang down from a hook on the wall.

“Have a look at these,” says the man.

He turns around, holding up a pair of brown skates.

From Love. Used with permission of Archipelago Books. Copyright © 2018 by Hanne Ørstavik. 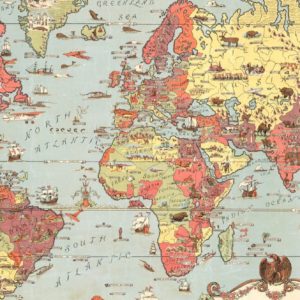 30 Books for Americans' 10 Most-Visited Countries Ah, spring—the itchiest season. And I'm not talking (only) hay fever here. After a long, cooped-up winter, spring is the time...
© LitHub
Back to top