Louisa May Alcott’s Letter of Advice to a Young Writer

"I Do Not Enjoy Writing 'Moral Tales.' I Do It Because It Pays Well."

Louisa May Alcott may have died 131 years ago, but plenty of people still count her among their favorite writers—primarily because of the semi-autobiographical children’s novel she published in 1868: Little Women. This was not the book Alcott set out to write—she had been achieving some success with books for adults under the pen name A.M. Barnard—but her publisher kept nagging at her to try. While writing the book that would make her a household name for generations, she remarked in her journal: “I plod away, through I don’t enjoy this sort of thing. Never liked girls, or knew many, except my sisters.” Well, she fooled everyone. The book was a huge hit. One contemporary reviewer described it rapturously in Eclectic Magazine:

It is like catching a glimpse of a varied and beautiful landscape after the confinement, clamor, and dust of railway travel, to turn these leaves after slumbering through the books of superlative perfections which are the pride of Sunday-school libraries and the bane of youthful readers.

“Little Women,” the reviewer went on, “is the very best of books to reach the hearts of the young of any age from six to sixty.” The Boston Daily Advertiser put it even more plainly: “Miss Alcott has no superior in the country as a writer for girls.”

So it’s no surprise that readers and aspiring writers began to send Alcott letters in droves. She replied to one of those writers with some valuable advice on Christmas Day, circa 1878:

I can only say to you as I do to the many young writers who ask for advice—There is no easy road to successful authorship; it has to be earned by long & patient labor, many disappointments, uncertainties & trials. Success is often a lucky accident, coming to those who may not deserve it, while others who do have to wait & hope till they have earned it. This is the best sort & the most enduring.

I worked for twenty years poorly paid, little known, & quite without any ambition but to eke out a living, as I chose to support myself & began to do it at sixteen. This long drill was of use, & when I wrote Hospital Sketches by the beds of my soldier boys in the shape of letters home I had no idea that I was taking the first step toward what is called fame. It nearly cost my life but I discovered the secret of winning the ear & touching the heart of the public by simply telling the comic & pathetic incidents of life.

Little Women was written when I was ill, & to prove that I could not write books for girls. The publisher thought it flat, so did I, & neither hoped much for or from it. We found out our mistake, & since then, though I do not enjoy writing “moral tales” for the young, I do it because it pays well.

But the success I value most was making my dear mother happy in her last years & taking care of my family. The rest soon grows wearisome & seems very poor beside the comfort of being an earthly Providence to those we love.

I hope you will win this joy at least, & think you will, for you seem to have got on well so far, & the stories are better than many sent me. I like the short one best. Lively tales of home-life or children go well, & the Youth’s Companion is a good paying paper. I do not like Loring as he is neither honest nor polite. I have had dealings with him & know. Try Roberts Brothers 299 Washington St. They are very kind & just & if the book suits will give it a fair chance. With best wishes for a prosperous & happy New Year I am your friend

If Miss Churchill was expecting any discourse on how wonderful writing is, she was disappointed. But I love Alcott’s practical take: write what makes you money, because that’s how you’ll be able to provide for your family. It’s also notable that Alcott gives direct publishing advice, even an address. As far as Loring goes, this is most likely A. K. Loring, who published Alcott’s Moods in 1865, and then reissued it in 1870 after Little Women became a hit. And now I suppose I’ll have to go seek out their correspondence to see just how impolite he was. 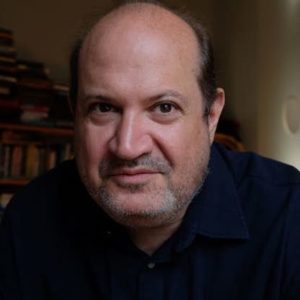 Sam Lipsyte is the guest on this week's Otherppl. His new novel, Hark, is available now from Simon & Schuster. This...
© LitHub
Back to top