Stieglitz, O’Keeffe, and the People Who Loved Them

On a Revolutionary Photo Show (and the Foursome That Followed)

Alfred Stieglitz often said that taking photographs was like making love. The crowds that flocked to the Anderson Galleries to see his work in the winter of 1921 could not fail to note the entwining of creative zest and sexual desire in his portraits of an unidentified “Woman”: this study of his model, dressed and undressed, made up a third of the long-awaited exhibition. Within days, it became the most controversial artistic event of the year. “Never was there such a hub-bub about a one-man show,” a sympathizer recalled.

In the aftermath of the recent Red Scare and Warren G. Harding’s election to the presidency, Stieglitz’s prints looked like an affront to society. To some critics, they were all but un-American—the artist’s way of flouting Harding’s plan to bring back prewar standards. (The country’s greatest need, Harding had repeated during his campaign, was “not nostrums but normalcy; not revolution but restoration.”) In the current political climate, the photographer’s assertion of his right to display life uncensored was an act of defiance. “Stieglitz has not divorced his art from life,” a critic wrote. If one were to find fault with his show, it would be with its “lack of reticence.” Stieglitz, he concluded, “keeps nothing back.”

On opening day, February 7, after braving the icy winds blowing down Park Avenue, Manhattan’s cognoscenti gathered beneath the skylights on the fourth floor of a neoclassical building on the corner of Park Avenue and Fifty-ninth Street. Contemporary reports describe them standing as still as if they were in church. After the closing four years earlier of 291, Stieglitz’s gallery (where New Yorkers first saw the most provocative modern artists), some thought that he had given up photography and his role as a guiding force in American culture. Recently, word had gotten around that he had been reinvigorated by his love for the artist Georgia O’Keeffe, that his photographs of her—identified only as “A Woman”—were sensational. “His resurrection,” a critic announced, “is a staggering phenomenon, and in its éclat, dazzling.”

Visitors entered the first room with a sense of anticipation. The photographer’s warm-toned blacks and whites glowed so intensely against the red plush walls that some wanted to touch them. Stieglitz was holding forth in a corner, telling spellbound listeners about his struggle to win acceptance of photography as an affirmation of life. Gazing at his prints of Manhattan—Fifth Avenue swirling with snow, cabdrivers watering their horses, Central Park on an icy night—people marveled at his way of “letting life be life,” as he was heard to say.

Others were drawn to his scenes of modernity—backyards  strung with clotheslines, half-finished construction sites, railroad yards in the snow. His recent work went beyond what was called “art photography,” eschewing the pictorialist techniques then in vogue to reveal the subject itself. “They make me want to forget all the photographs I had ever seen before,” a critic declared.

Moving into the next room, which was filled with portraits, visitors lingered over those recalling the great days of 291. Members of the Stieglitz group studied his prints of their circle: the artists John Marin, Marsden Hartley, and Charles Duncan; the critics Leo Stein and Paul Rosenfeld; and the West Indian writer Hodge Kirnon, who had run the elevator at 291. Stieglitz’s surrogate son, the photographer Paul Strand, stared back at those who stopped in front of his likeness on their way to the pictures of the notorious “Woman.”

Constellations on the horizon of homegrown modern art, they prodded, inspired, irritated, and encouraged one another as they grew into modes of relationship that none could have foreseen.

They encountered her in a grouping that showed her before one of her charcoal drawings. Dressed in a trim black jacket and hat, she looked away from the camera—a portrait of the artist as a young woman. Moving around the room, visitors met her in more intimate poses—her hat off, her tailored blouse unbuttoned, her dark tresses undone. In a warm palladium print, she reappeared in a white kimono whose delicate pattern complemented the dark tones of her hair. Studies of her elegant hands and fingers were grouped as a single portrait, as if these parts expressed the woman as a lover and an artist. On another wall, her hands touched her voluptuous breasts, weighing their contours or pressing them together—in a group labeled forthrightly, “Hands and Breasts.” Another set of sepia-toned prints, “Torsos,” compared her body to sculpture while simultaneously drawing the gaze to the dark V shape of her pubic hair.

Photographs marked by such intimacy had never been seen in public. They seemed to tell a story tracing the growth of the couple’s affections. Stieglitz’s portrait of this woman, one admirer wrote, “showed us the life of the pores, of the hairs along the shin-bone, of the veining of the pulse and the liquid moisture on the upper lip.” To some, these prints were love poems.

Stirred by what they saw, visitors returned again and  again; men asked Stieglitz if he would take portraits of their wives and sweethearts. But some found the photographs obscene. The group called  “Hands and Breasts” offended one man, who ranted at the gallery’s director that such photographs did not qualify as art and should be taken down. The review in The New York Times was laced with innuendos: in these “psychological revelations,” it proclaimed, “a good deal of the primitive [was] getting the upper hand.” Those who feared what might be found in their psyches were warned to keep away from Stieglitz. Other critics were more forthright: “The spirit of sex permeates the entire body of photographs.”

For the rest of the month, while critics debated the merits of Stieglitz’s prints and argued about photography’s status as art, the public flocked to the show. Even those who had not been in the know now understood that the subject of his composite portrait was the young art teacher whose affair with the photographer had led to his leaving his wife. Reactions to this record of his feelings for his mistress varied from outrage on the part of some, including photographers for whom such frank treatment of the female body was unthinkable, to the awed response of a young woman who left the gallery in tears. “He loves her so,” she said as she went out the door.

Searching for more measured ways to express themselves, some compared the portraits to old master drawings. Stieglitz’s pictures of O’Keeffe were painterly, the critic Henry McBride observed; they put him in mind of canvases by Courbet or Rossetti. “He spends an immense amount of time making love to the subject before taking it,” McBride added. But he referred to O’Keeffe not as an artist, but as Stieglitz’s muse: “Mona Lisa got but one portrait of herself worth looking at. O’Keeffe got a hundred.”

The gallery became a place to see and be seen. People returned in increasing numbers. The bolder among them joined the group in the corner where most afternoons Stieglitz held forth, explaining his desire to embody “universality in the shape of a woman.” He talked almost nonstop, gesticulating and shaking his thick white hair to emphasize his belief that it was in the New World that a truly modern art like photography had found its home. Moreover, he believed that in his “Demonstration of Portraiture,” there was “an interrelation of the parts to the whole and . . . a symbolism of all life.”

Those who wondered what was being symbolized may have found some satisfaction in a review in The Nation by Herbert Seligmann, one of the Stieglitz clan. Stieglitz had “laid bare the raw material which . . . America has not yet dared to look upon,” Seligmann wrote. “Love of the world leads him to the purest expression of it, to woman.” Seen this way, his portrait of this woman evoked an innocence and receptivity “that  have no home in [an] America” whose genteel standards kept it from embracing the truths of the body.

Paul Strand took up the defense in terms that gallery-goers were more likely to grasp—by praising Stieglitz’s use of the camera. His essay “Alfred Stieglitz and a Machine” began circulating among New Yorkers keen to understand what the photographer  was  up  to.  His  work was life-affirming, Strand wrote: “Stieglitz . . . accepted the machine, instinctively found in it something that was part of himself, and loved  it.” It was also groundbreaking. “These amazing portraits, whether they objectify faces or hands, the torso of a woman, or the torso of a tree, suggest the beginning of a penetration of the scientific spirit into plastic media.”

Strand could also be heard arguing that he and his mentor were cultural “workers,” that their works offered a means to identify “those hostile impulses of society which try to prevent every extension of the human spirit.” Understood this way, the camera was an expression of “young desire . . . facing a world and social system which fears and thwarts and destroys.”

These were fiery words, out of keeping with Strand’s habitual reserve, but they appealed to Rebecca Salsbury, a vivacious young woman who accompanied him to the gallery to meet his mentor. In the throes of her own struggles with the social system’s—and her mother’s—opposition to the desires of strong-minded women like herself, Rebecca experienced their meeting as a turning point.

She listened to Stieglitz talk nonstop until closing time, as they strolled along Fifty-ninth Street to Columbus Circle, and for the rest of the evening at his favorite restaurant. What Stieglitz and his work revealed to her, she believed, was “affirmation, life kindled.” Seeking to re-create herself as a modern woman, Rebecca would often compare herself to Georgia, as Paul compared himself to Alfred: He had just begun an extended portrait of Rebecca as his muse. But this sequence, which he never found satisfactory, was as much an homage to Alfred—and to his relations with Georgia—as a tribute to the woman who had just come  into his life. The two couples would become “a tightly integrated foursome, with admiration, competitiveness, in-jokes, and alliances passing in every possible direction between them.”

At this stage, Stieglitz held uncontested sway over his protégés. He molded those who, like Rebecca Salsbury, were awestruck in his presence. Yet it was also true that intimates experienced his wrath if they crossed him. Years later, O’Keeffe recalled, “There was a constant grinding like the ocean. It was as if something hot, dark, and destructive was hitched to the highest, brightest star.” In the interweaving of the two couples’ lives and work, these extremes coexisted. Constellations on the horizon of homegrown modern art, they prodded, inspired, irritated, and encouraged one another as they grew into modes of relationship that none could have foreseen.

Their foursome became more entangled once Alfred began taking photographs of Rebecca—in an implicit rivalry with Paul, his disciple—and when Georgia told Rebecca that she and Paul had once been so close that they discussed living together. Without Rebecca’s encouragement, Georgia would probably not have discovered New Mexico as her chosen terrain, nor would Paul and Rebecca have ended their marriage when he set out to attempt a more politically conscious photography in Mexico. And without Georgia as her model and surrogate sister, Rebecca would not have found her way to her own practice of art in the Southwest—the region that became, for both women, the antidote to Stieglitz’s New York.

Carolyn Bruke is the author of Foursome: Alfred Stieglitz, Georgia O'Keeffe, Paul Strand, Rebecca Salsbury, No Regrets: The Life of Edith Piaf, Lee Miller: A Life (finalist for the NBCC), and Becoming Modern: The Life of Mina Loy Born in Sydney, Australia, she now lives in Santa Cruz, California. 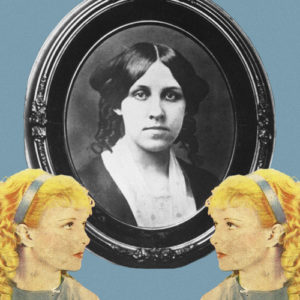 Louisa May Alcott may have died 131 years ago, but plenty of people still count her among their favorite writers—primarily...
© LitHub
Back to top