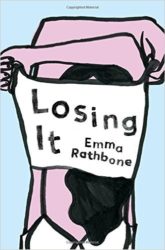 The following is from Emma Rathbone’s novel, Losing It. Rathbone is the author of the novel The Patterns of Paper Monsters. She is the recipient of a Christopher Isherwood Grant in Fiction, and her work can also be seen in the Virginia Quarterly Review and on newyorker.com.

When was the last time you wanted something? Wanted it so badly that the very grip of your wanting seemed to prevent you from actually getting it because you were throwing things off with your need, holding too hard, jarring things out of joint?

Aunt Viv had left for work before I woke up and I’d explored her home and the yard. I’d found some rubber boots in a hall closet and skirted the perimeter of the land in the back, weeds and tall grass whipping against my shins. A small trail led into the woods, and I went along on it until I came to an overgrown trailer that looked like a dining car from the 1950s. I peered in the windows, which were almost fully opaque with dirt and dust, and inside saw the outline of piles of wood. I kept going on the trail until it went under a fence and I had to turn around.

Back out in the sun, I kept going until I came to a twisted-up oak tree. I sat on the roots for a little while, watching everything in its hot summer stillness, grateful to be in the shade.

I went into the barn, where there were plastic chairs, and a few tables, and a bed frame, and some old wreaths, and sharp slats of light on the floor. There were cans of paint and jars and canvases. Something big and bulky was covered in a dusty tarp. I felt a small sting on the back of my leg. I slapped it and left.

Down the long gravel driveway, at the mailbox, I looked back and forth along the street. In the distance, ivy crawled along the power lines. The day bore down. I walked back to the house, feeling heavy and disorganized with heat. I got some water and then came back out and sat on the porch.

My virginity composed about 99 percent of my thought traffic. I concentrated on it—trying to drill it down to its powder, its particle elements, trying to recategorize it, impose different narratives on why this had happened.

I knew the way it worked, too—that certain attitudes would attract certain things. I knew that if you ignored something, stepped away from it, allowed yourself to breathe, it would come to you. It was like when I worked the box office at San Antonio Stage one summer, and I had to open the wonky combination lock to the safe, and sometimes the harder I tried, the more stuck it would get. But if I gave it a moment, allowed myself to float away, I had that necessary confidence, finesse, whatever that thing is that certain dim athletes and movie stars have—that insouciance that causes all the cogs in your universe to sync, gives you easy passage. The lock would click.

And that was the problem—to want something so badly was to jam yourself into the wrong places, gum up the works, send clanging vibrations into the cosmos. But how can you step back and affect nonchalance?

When I really wanted to torture myself I’d think of Eddie Avilas. He was the guy who, in high school, had most closely resembled someone you could call my boyfriend. And what really stung me about it, thinking back, was his general optimism and knee-jerk decency, how I hadn’t realized what a nice person he was.

I would remember the time he squeezed each of my fingertips on the dusty blue tarp in the middle of the track field. His tiny kitchen and terrifying father. His strange jeans. The beat-up neon-yellow lunch satchel he would always bring to school. (It was only in hindsight that I realized Eddie was extremely poor.) How he would feel like a pile of firewood, all jangly and warm, lying on top of me when we were watching a movie in my basement.

There was the time we were in his small sunlit kitchen with our homework spread out in front of us on the table. We reached a kind of lull, or resting point, in the conversation and he does this

thing. I sort of see it from the corner of my eye and then look over, and through some glint of intuition I know that he wants me to see as he tosses his pen up into a flip and then expertly catches it. He looks at me with eyes as hopeful and pliable as a baby bird’s, but there’s also a gleam of pride there. This all happened very quickly, but so much occurred to me in that moment—that he had been practicing this move and waiting for a chance to perform it when it would seem most offhand and casual, like he just had this facility with the world, this capability that he wanted me to see. And in that moment he needed my approval so much that it was embarrassing, and instead of doing what I should have done, which was to just give him that by some flicker of awe or grin of admiration, I ignored him. And he saw me deciding to ignore him. And I guess you could say that it wasn’t a big deal, but a part of me knew that it was in these small transactions that unkindness could be most felling. I would have given anything to go back.

But that wasn’t even the worst part. The worst part happened a few months later in a hotel pool in Corpus Christi. Because a few of our friends were going, Eddie and I got roped into a beach trip spearheaded by this Christian organization that was always sponsoring events at our high school. Despite the religious underpinnings, we had heard that the beach trip was basically a free-for-all. It was one of the few weekends I didn’t have a swim meet, so we signed up.

When we got there, however, it wasn’t long before we figured out that it was going to be a super-structured weekend of indoctrination. The second night we were all corralled into a conference room or ballroom-type area at the hotel where we were all staying, and made to watch a Christian punk band play against a bunch of depressingly stacked chairs. Eddie and I managed to sneak out.

We ran through the carpeted hallways. We made out against the empty breakfast buffet in the deserted dining room. We found a sitting area centered around a display of mystery novels and a small tree in a geometric pot. Hopped up on the warm hotel air and sense of escape, we decided to find the roof. Instead we found the pool.

It was deserted, bright, humid, and sultry with a shrine-like stillness and a fake, spiky tree in each corner. We tested the water and it was warm. We stripped down to our underwear and climbed in. Eddie got out, sculpted his wet hair into a Mohawk, and cannonballed. We breathed into each other’s mouths underwater.

At a certain point, we were kissing against the side, sitting on an underwater outcropping, like a stair or a ledge. Eddie pulled back and said to me, “Do you want to?” He said it without any pressure, as if this was just a one-time thing, a toss-off, the perfect crest to our little escape, and not something we’d slowly, languidly been building toward. He said it with warmth, a sense of adventure.

I spent a lot of time thinking back and trying to trace the exact pathways of logic or reasoning that led me to, after considering it for a few humid seconds, coyly decline. It’s not like I didn’t want to—we had been slowly kissing for a while. It could have been that something about the cold lapping of the water, a less comfortable temperature than it had been before, along with a smudged pelican fixture that seemed to be staring at us from the wall combined to tip the atmosphere just enough the wrong way. It could have been that the stampeding intimacy of not only that moment but the whole half hour before was just too much, and I felt that I just needed a second. But what I think it really was—because I was on the knife’s edge, it really could have gone either way—was that I figured this was just the tip of the iceberg. That this was surely the beginning of many similar escapades. That I could afford to decline, if only to make the next proposition all the more delicious.

How could I have known how wrong I was?

So I told him, “Not tonight,” and pushed back, swimming away. It didn’t seem like a big deal at the time; Eddie smiled at me quizzically and we hung out for a little longer and then got out, but things never culminated for us in the same way again. I kept assuming they would, but I think he thought he had been too pushy, and I was too shy to bring it up. It was as if that moment kicked off a series of misunderstandings that caused us to fall slightly out of step. He went away for the summer and by the time he got back things had ramped up for me swimming-wise; I hardly had any free time, and that was that.

I began to think of that moment, when I pushed away from him and swam to the other side of the pool, as being where my fate changed, where I branched off and started living a parallel life that wasn’t supposed to be.

In the other life, having lost my virginity at a young age in a hotel pool, I’m sexed and supple and swanning through a series of relationships, through life. The hang-up of losing my virginity would never have impeded me. It would never have started to worry me, only slightly at first, but then more and more as my friends each lost theirs and I got older and it seemed that I had lost some beat, some essential rhythm.

Untouched. Like a flower suffocating in its own air. Like something pickling in its own juices. Something that badly needed to be turned inside out, banged right.

I watched a bumblebee leadenly explore a rose next to the porch. In the distance were the faint sounds of construction, something grinding and then hammering.

I thought, The further down this path I go, the more freakish I’ll become. The stranger of a species I’ll be, curling with my own horrible, weird hair. It was time to jam the key into the lock and force it, because I didn’t have time to step back and meditate my way onto the right path.

I needed to make a plan for the summer, a surefire strategy. I had to shed whatever preconception I had before about how it was all going to

From LOSING IT. Used with permission of Riverhead Books. Copyright © 2016 by Emma Rathbone. 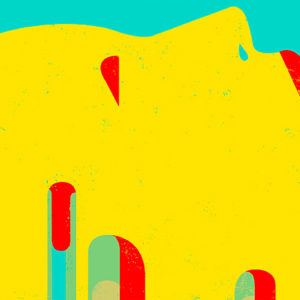 Five Books Making News This Week: Suspense, Sci-Fi, and Single Parents Drumrolls for the upcoming release of Harry Potter and the Cursed Child as a Scholastic magazine flashmob takes over Manhattan...
© LitHub
Back to top