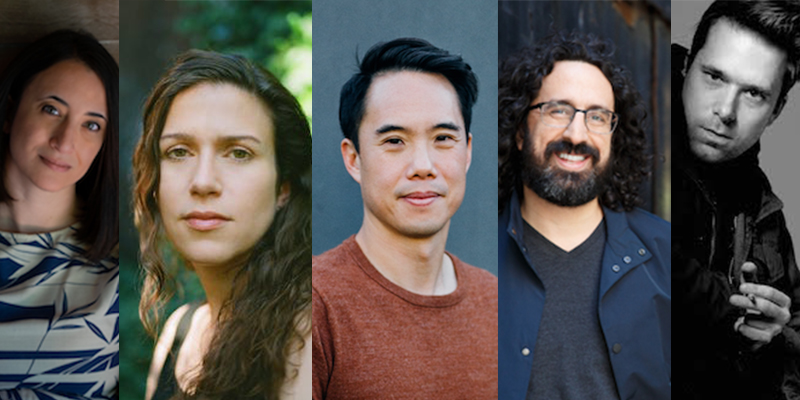 Amy Bonnaffons: Sex and haunting. Escaping oneself through the body of another. The thinness of the veil between this world and other ones.

Emily Nemens: The annual carnival that is spring training baseball. Fame, fandom, and its extremes. Class and the recession. The built environment and the natural one—and the limits of both. Hanging on by one’s fingernails.

Charles Yu: Playing the role of yourself. For others. For an unseen audience (in your mind). Roles: parent, child, Asian, White, Black, Man, Woman, Other. Feeling trapped, being trapped. Going off script. Being a protagonist.

Michael Zapata:  Some years ago I discovered that my great-grandfather, a radical leftist and a political exile who founded a farming village, Santa Fe, in Ecuador, was also a secret poet and that there was a lost journal of his somewhere. I remember hunting for that journal in archives in Quito, in my tio’s house, in my tia’s house, in my grandfather’s house, in the colonial streets of Guaranda, in small villages dotting the otherworldly volcanic Andean páramo. I remember flying home, empty-handed, with the feeling that stories often sheltered other stories.

Emily Nemens: Yankee Stadium and the Kingdome. Strip malls and Frank Lloyd Wright. Small-town busybodies and empty desert landscapes. Rattlesnakes. Reality TV and the death of the newspaper. Aging protagonists and the amateur draft. Eviction notices, the rules of poker, and the control of nature.

Emily Nemens: Live oaks. Lots of porches, lots of humidity, and occasional torrential, catastrophic rain. Lost Bayou Ramblers (the band, the way I spent my weekend nights). Vernacular architecture, roof trusses and all. The far end of the press box at Tiger Stadium, the Rothko Chapel. Tailgating. Editing a magazine, editing a different magazine, and between/within: writing fiction like a snake eats. Drawing cartoons when I got stuck. Getting a dog, walking a dog when I got stuck. Returning to New York with a good job and a kitchen full of shattered dishes. Replacing the dishes.

Christopher Bollen: A writing residency in Paris in a 17th-century monastery, a boyfriend and an apartment back on the Upper West Side, the disturbing sense of no longer being remotely young and finding myself lost halfway through our life’s journey, running four miles a day.

Charles Yu: Obama’s second term. Children crawling, walking, talking, reading, off to school. Moving from Los Angeles to the suburbs. Changing careers. Loved ones getting sick; loved ones getting better. A lot of time in the car. The election of Trump. Turning 40. Me aging; my bionic wife somehow not. Writing this book three times; throwing away the first two attempts. Forgetting how to write. Losing pets, friends, family members. Learning how to write.

Michael Zapata: Teaching high school English in Chicago. Activism, a teachers’ strike. Marrying the love of my life, our move to New Orleans and all the joy and misfortune that followed: Mardi Gras, new brilliant amigos, a house fire, the Chikungunya mosquito virus, our first son born during a wild tropical storm. Always, pinned above my writing desk, the phrase festina lente (hurry slowly) scrawled on notebook paper and a photograph of Studs Terkel in an overcoat hailing a taxi on Wabash Avenue.

Charles Yu:  Navel-gazing. Self-indulgent. Clever for its own sake. Excessive use of commas.

Michael Zapata: “Boisterous.” Although dinner with friends and family is—thankfully—much more so. “Not much about anything,” but, on second thought, I do sort of love this. Occasionally, in my writing and life, I aspire to Seinfeld-like summits of pointlessness.

Emily Nemens: Anyone who says “sports?” with an inflection that suggests doubt. Doubt that it can also be literary, intelligent, or ambitious, while also addressing said sports, that it can be for people who like sports and for those who haven’t thought about sports since middle school gym class. It can.

Amy Bonnaffons: Someone on Medium described my short story collection, The Wrong Heaven, as “like Secret deodorant: strong enough for a man, but made for a woman.” I actually didn’t despise that, I thought it was really funny and I sort of appreciated how its gender politics were right there on the surface. It’s more insidious when gender politics are cloaked in words like “quirky.”

Christopher Bollen: Rambling. Also the general inference that because there are thriller or mystery aspects to my novels they aren’t to be taken seriously as literature. And the old tug of war between, “I wanted more shocking twists at the end” and “the end wasn’t believable.”

Emily Nemens: On stressful days in Manhattan, I sometimes have a fleeting but strong impulse to pull an Agnes Martin. Which is to say, pursue a very process-oriented style of painting in a relatively isolated place. There’s something very appealing about that.

Amy Bonnaffons: I’d be some kind of healer, or a dancer/choreographer.

Michael Zapata: An ecologist, in the Amazon, conducting a decades-long census of bioluminescent fungi or owl monkeys. Maybe, in a parallel universe I’m doing just that?

Emily Nemens: I’m good at structure. It doesn’t come naturally, nor easily, but I love being ambitious about how things slot together, how they weave, overlay, or echo across the course of a story. I’m still working at dialogue, which means I default to a lot of independent (or lonely, depending) characters, and only in revision do I get them to start muttering. Not until draft five might they have a proper conversation.

Michael Zapata: In my twenties I wrote for the stage so I’m still fond of monologues, longish 19th-century-like digressions. I love the experiment and mad challenge of pulling together disparate genres and traditions. I’m profoundly jealous of those who are funny on the page! Paul Beatty, Thomas Mundt, Helen DeWit, Cervantes. That takes enormous structure and discipline. I get distracted easily. I suppose I mentioned festina lente, but maybe writing more quickly than a novel a decade would be nice.

Christopher Bollen: I’m pretty damn good at character development and smart, sharp dialogue. I also love writing about new places. What I desperately need to get better at is front-loading the plot so big, exciting events happen in the first twenty pages. I am by nature a tease: I flirt around the promise of more but don’t put out until the last minute.

Amy Bonnaffons: I’m good at channeling: I write fiction mostly in the first person because I can just catch a voice and let it speak and allow the plot to emerge from the way the voice reckons with itself and its encounters with the world. I suppose I’d like to be better at sustaining interest and energy in the third person. Right now I’m working on a nonfiction project, and I find that it’s challenging for me to do something other than sitting down and channeling a character. How do I channel myself?

Charles Yu: I think I’m pretty good with titles. I am sometimes capable of writing dialogue that sounds like actual humans. My prose often has rhythm and a sense of sound. I wish I were better at: everything else. Third person limited omniscient. Avoiding word repetition. Avoiding sentence structure repetition. Not under-writing. Not being overwrought. Hitting the mark—or missing it; but being willing to do one or the other. Not hedging or letting words dribble out. Saying what I mean and leaving it at that.

Michael Zapata: As a kid, in the summer, I sometimes worked with my father, a jewelry caster, on Jeweler’s Row. By foot or skateboard I would deliver or pick up jobs and the casters, polishers, gold sellers, and diamond setters would stop for a hot minute to tell me stories about lost loves and stupid cousins in Mexico City, people who ripped them off or the strangers who helped them when they arrived to the States, borders both real and metaphysical, the occasional mafia boss with Cadillac fridge-trunks full of steaks and wine. Listening to them was one of the greatest joys of my childhood.

Christopher Bollen: There is equal hubris in being a dog groomer, maybe even more. Fiction writing isn’t a diary entry. It’s not built only on teary feelings and earnest pronouncements. There’s also the craft, the style, the tone, the delivery, all the technical artistry that makes writing so much richer and more difficult than just having something to say.

Charles Yu:  Balancing it with the countervailing force. A belief that what wants to be said needs to be said. It’s not about me. I’m just the vessel for the story to come out. So it’s not “I’m a great writer” or even “this is a great story,” but “this is a story that needs to be told, like this, and I’m the one who gets to do it.” In the way DNA is using us to make copies of itself, necessary writing uses writers to get itself typed.

Amy Bonnaffons: I don’t think it’s hubris to make art and hope that it means something to someone. I think that’s our birthright as humans. It’s a massive privilege to be heard in the way I have been, and I want to work toward others having that access—and there are many different ways for our words to reach each other, many different audiences for whom to write (including, not least, oneself).

Emily Nemens: I’ve got hubris times two for trying to write a baseball book, that iconic and slightly obsolete subset of American fiction. But because it’s iconic, and because America’s pastime is losing its primacy, I think it’s the perfect time to interrogate the sport, to think about its limits, its margins, and its continued possibility. Plus, I’ve been watching baseball for thirty years, going to Cactus League spring training for twenty-five of those. Oof, I hope it doesn’t take another quarter century for the next book to cook. 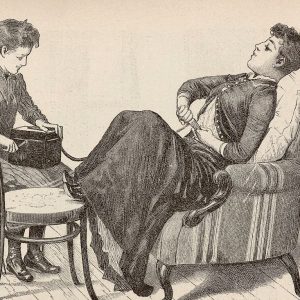 Sometimes the strange actions of the body in question are taken for a name. The Dancing Plague, for instance, in which 400 people,...
© LitHub
Back to top