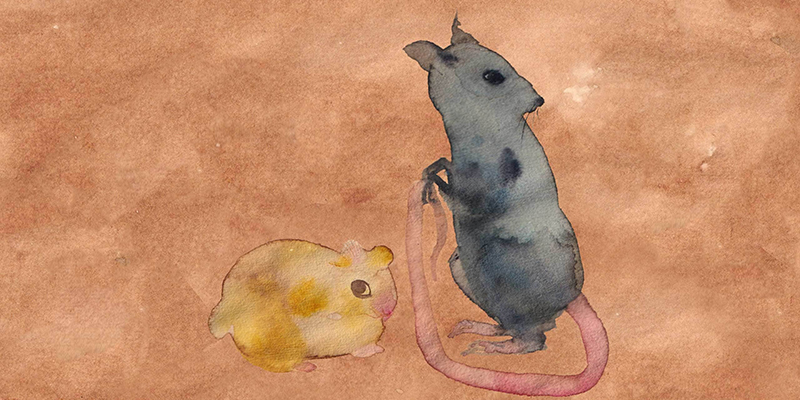 In a playful tale of friendship, envy and empathy, Amelia Abraham’s Future Fable features a pair of ambitious rodents.

The Rat and The Hamster

A rat and the hamster walked into a bar. They ordered a drink.

“This is not a joke,” the rat said to the hamster.

“I know, I’m listening,” urged the hamster, although the rat thought she could detect an eye roll.

“I feel like you don’t take my pain seriously,” the rat went on. She was down on her luck. She couldn’t pinpoint what it was exactly that had caused her low mood today – maybe it was her cycle – but it felt like everyone was against her. Like she could do nothing right.

“Have you talked to someone other than me? A professional?” said the hamster.

“You know I can’t afford that,” said the rat. The hamster was always trying to send everyone to therapy. The rat wondered if she was on commission.

“Well, it’s a bad time of year,” sighed the hamster, staring into the middle distance.

It was indeed a bad time of year, rain was beating on the windows of the bar. Out in the streets, the sewers were overflowing. Soon, the ice would come, and then food would be scarce.

The hamster had none of these problems to worry about, the rat knew. But still, the hamster complained: her owners were about to go on vacation, she was concerned that she’d be lonely. The rat scoffed and ordered another drink. They sat in silence until it arrived.

“I can’t catch a break,” said the rat. “Last month I had five rat babies sucking my teets dry—God love em’—and now I’m back to work and there’s nothing out there.”

She sipped her Merlot, the kind that arrives with a thin layer of dust on top. The rat believed in a meritocracy, she did, but she was starting to wonder if there was something about her – inherent to her – that was hampering her search for a new place.

Still, she didn’t want to go into all that, not with the hamster.

“I have an idea,” said the hamster.

“Go on,” said the rat, reluctantly.

“Why don’t you come and stay with me?” The hamster clarified: “Just while Tim and Chris are away.”

The rat looked into the hamster’s face, searching for a catch. The rat could feel her despair evaporating, but she was also the distrustful type. Had the hamster had one too many again? Was she just feeling giddy because it was the holidays, and regret her generosity tomorrow? Was this the hamster’s savior complex at work again? Did it matter?

“Are you—are you sure?” said the rat.

“It’s just a long weekend,” said the hamster. “Take it or leave it.” She shrugged.

That night, in her wheel, the hamster’s head span. She began to worry about having the rats come to stay. What if they ate the place empty? What if they started breeding? Worse yet, what if they brought some kind of awful pestilence with them?

The hamster was concerned that she had made a terrible mistake.

On Thursday, after Tim and Chris left for their cruise, the hamster waited for the rat’s arrival, napping intermittently.

The rat, meanwhile, had been too nervous to sleep. She had always idealized the hamster’s lifestyle from afar, even if she hadn’t actually seen it up close and personal, given that she’d never been to Tim and Chris’s house before.

Given that, until now, she’d never been invited.

“Compare and despair,” the rat’s mother had always told her when she stroked her back before bedtime. Her mother, who raised ten offspring and lost her life protecting them.

Yet the rat couldn’t help but compare. In a way, she found the comparison helpful. It’s what drove her to always be looking for a nicer place, more food, a warmer and damper lifestyle.

The hamster was her frenemy, yes, but what was so wrong with a frenemy if it meant a little healthy competition?

The rat knocked on the hamster’s back door. She waited there, on the doorstep, hushing the kids. They bickered and gnawed, falling over one another. The rat turned to them.

Still, there was no answer at the door. Puzzled, the rat ushered her family to a side door, and they let themselves in.

“Wait here, and DON’T eat anything,” the rat told the kids, leaving them in the kitchen.

She searched downstairs quickly and methodically, but the hamster was nowhere to be seen.

So, she climbed the stairs, dragging her body up step by step.

In the hallway, she could hear a noise, and prayed it wasn’t the kids downstairs breaking things, embarrassing her. She realized though, that it was emitting from a locked door down the hall.

She padded towards it, cautiously. There was no smell of cat inside the house, but she had been burned before.

When the rat reached the door at the end of the hall, she pushed it open, and with a creak, it swung backwards.

Across the expanse of linoleum flooring a pink cage sat solemnly beside the bathtub. The hamster stared out from inside of it as though frozen.

“I—” the hamster started to speak but faltered. She looked out regretfully from between the bars of the tiny cage, the small mound of food already rotting next to her in the corner.

“But what?” said the rat gently.

“But I couldn’t get out,” said the hamster, in what was more like a whisper now.

The hamster and rat held eyes with one another then, locked in time, contemplating the other’s existence.

Until suddenly, a large crash came from downstairs—as though something had fallen, or broken.

“I should go,” said the rat, in a voice full of kindness and devoid of self-pity now.

She turned on her heel, gathered her children, and led them off into the night.

No wonder the hamster needs a therapist, she thought. 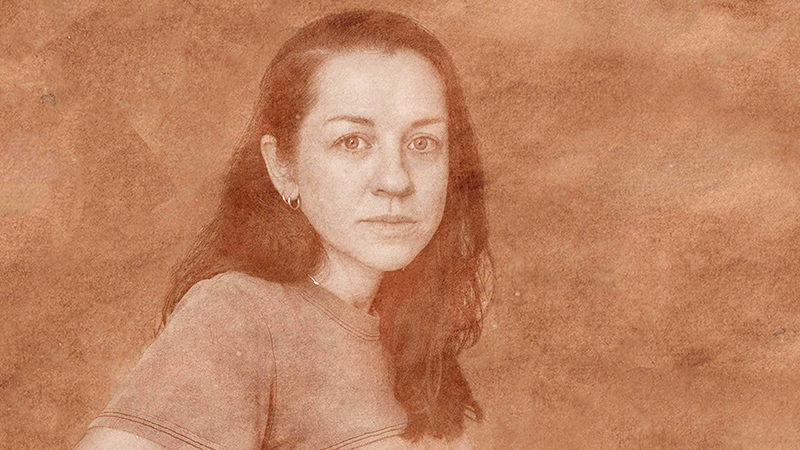 Amelia Abraham is a journalist and the author of two books—Queer Intentions (2020) and We Can Do Better Than This (2021), an anthology which brings together 35 voices on the future of LGBTQIA+ rights. In a playful tale of friendship, envy and empathy, Abraham invites listeners to consider comparison and ponder its worth—or lack thereof.

Aesop’s inaugural podcast series offers freshly penned fables that may provide catalysts for conversation, contemplation and quietude. Written by some of the most thought-provoking authors of today, each of these bedtime stories for adults adopts the ancient fable form to elucidate morals for modern times. Season one includes fantastical tales by Mieko Kawakami, Rivers Solomon, Akwaeke Emezi, Amelia Abraham and Lydia Millet.

Stephen King on What Authentic Maine Cuisine Means to Him 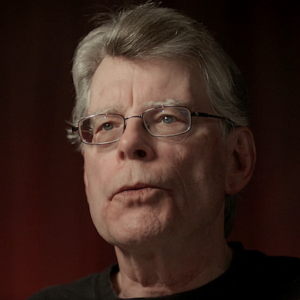 Stephen King on What Authentic Maine Cuisine Means to Him I was born in Maine, grew up in Maine, and expect to be buried in Maine. Before that happens, I’ll continue to eat in Maine,...
© LitHub
Back to top
Loading Comments...