David Wright Gets to the Heart of What Libraries Do

Librarians, at cocktail parties and at work, are often asked whether anyone uses libraries anymore. This oblivious question has led many in the profession to insist, in marketing campaigns and in interviews, that libraries are “more than just books.” Which is, of course, true, and has been for many decades. But it also has the effect of eliding the important work libraries do to connect citizens with books and narrative. In this essay, David Wright reminds us of the power of story in the public library.

This is going to be bad. It is noon on the Monday before Christmas, and I have a terrible cold, blocking my sinuses and reducing my voice to a weak, croaking octave. I cough feebly a few times—it’s in my chest as well—and step into the auditorium, setting a box of Kleenex and a mug of warm water down on my table next to the microphone and reading light. After a few preliminary remarks to the crowd, I steel myself to struggle through what is certain to be the Worst Story Time Ever.

In addition to being sick, I am less than confident about the story I’ve selected. The usual fare for Thrilling Tales: A Story Time for Grown Ups, is by definition, intriguing. I’d conceived of these readings as the adult equivalent of a children’s story hour, less about appreciating literary artistry than about the pure pleasure of losing oneself in narrative. This alone has deep significance. For better or worse, our species’ defining trait is Story. We are immersed in it, waking and sleeping. We parse these stories into seemingly exclusive categories such as science, politics, and humanities; history, biography, and fiction; books, movies, and songs, but they all stem from our perhaps unique instinct for perceiving the world through story. As Nancy Huston writes in The Tale Tellers, “We alone see our existence on Earth as a path endowed with meaning (and direction). An arc. A curve that takes us from birth to death. A shape that unfolds in time, with a beginning, a series of adventures, and an end. In other words: a narrative.”

And so I have typically chosen authors who give this twisting, turning arc of narrative its full due. This year’s readings include stories by Ruth Rendell, Elmore Leonard, Shirley Jackson, James M. Cain, Stephen King, Ray Bradbury, and Patricia Highsmith. There will be gaslighting, murder, pursuit, aliens, ghosts, and even a touch of cannibalism—though not more than once per year. (I’ve made a rule about that; this is a lunchtime program, after all.) The genres, styles, and tones vary, but each story generates intense interest in what happens next. I know I’ve succeeded when I hear a murmur of realization spreading through a crowd, a sudden gasp, or the laughter of surprise.

Each year around the holidays I’ll mix in something a bit more heartwarming, and today I’ve chosen to share Willa Cather’s early story The Burglar’s Christmas. It depicts the plight of a starving prodigal son who commits his first desperate criminal act in what turns out to be his parents’ new home, whence ensues a prolonged and unapologetically maudlin reunion that is the height of Victorian sentimentality. Few stories I’ve ever read wear their heart quite so brazenly on their sleeve. Even without a bad cold, I don’t know if I could carry if off; it’s so damned earnest.

Like many librarians, I arrived at this profession via a circuitous route. In my case, via the theater. Day jobs in libraries turned permanent as I caught the bug for public service, in many ways as exciting and improvisational as my prior calling, yet more reliably meaningful and remunerative. Under the generous tutelage of Nancy Pearl, I learned all about what the library trade calls “readers’ advisory.” I landed a job in my hometown library system, now a colleague of the very same librarian whose story times I’d attended as a child. I’d gone from one temple of story to another.

When we opened our new downtown library with its large auditorium, back in 2004, I stood looking up at the empty seats and immediately felt that I needed to do a story time for adults there. Ours is one of the most childless cities in the country. Every library has children’s story time. Don’t adults deserve the same? Our need for story doesn’t go away at a certain age. Not surprisingly, turnout has been good for over a decade, and spinoff programs such as ghost storytelling in bars are standing room only. Last year, I added another narrative element by pairing story readings with screenings of film adaptations in a program I called Page to Screen.

As the public knows (and public library systems ignore at their peril), at libraries’ core is the preservation, dissemination, and celebration of Story. What better way to embody this than by loosing stories from the page and filling the air with them? Listening to stories is primal, but hardly anachronistic, as the burgeoning audiobook industry attests.

Which brings me back to my wretched date with dear Miss Cather. Launching into the story, I struggle to render words out of the reedy remnants of my voice. I sniffle. I sip water. My pace is slow and deliberate as I search for sound, trying to ground the words in reality. Luckily, it is a deliberate, reflective sort of story, and my shattered voice may even complement our young hero’s starving and destitute state. When the hero cries out “Oh, mother, life is hard, hard!” my voice breaks into a plaintive squeak. Well, that’s probably the best place for that to have happened, I suppose.

Afterwards, as the crowd dissipates with holiday wishes, not a few stop for Kleenex. Does everyone have a cold, or were they actually touched? Lingering behind the others, a woman approaches and confides in me, telling me of the death of her son from cancer a few years previously. Through tears, she tells me how Cather has sounded the depth of a mother’s love, and how cathartic she found it. We stand and talk about her family, holiday plans, what the coming year holds in store, and our mutual gratitude for story, and the places where it is revered and shared. Okay: so this wasn’t the Worst Story Time Ever, after all.

David Wright works as a reader services librarian at the downtown branch of the Seattle Public Library, teaches readers advisory at the University of Washington, is on the steering committee for LibraryReads, and writes and reviews for The Seattle Times and other media, as well as the library’s blog, Shelf Talk. He recently received the American Library Association's Margaret E. Monroe Library Adult Services Award. On Twitter and Facebook he is @Guybrarian.

The Challenges of Bringing a Bookstore-Bar to the Bronx 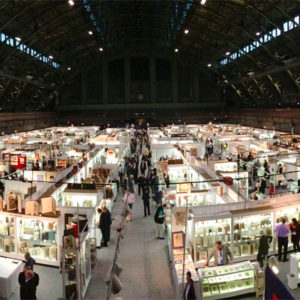 The New York Antiquarian Book Fair just left town after three days of bibliomania in the Park Avenue Armory. The affair is a singular...
© LitHub
Back to top