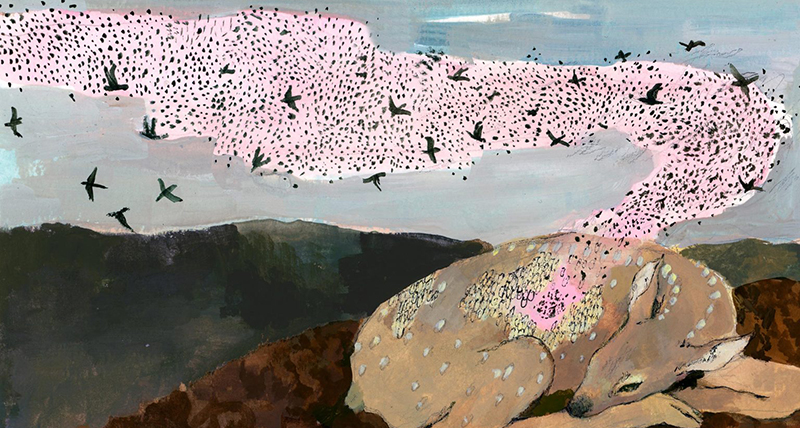 In this week’s episode, as she bears witness to the decomposing body of a deer, Lia Purpura considers the forces of restoration at play: the processes which transform bodies from one state to another and the beginnings that emerge from endings.

Because this, too, is a way to begin, I’ll begin at the end. We’re all in some way beginning at the end now, aren’t we?

10/26/19: I found a deer, dead in the patch of urban woods where I walk every day. The cream of his belly rose up like a moon. He was hurt at the rump, but I couldn’t see how. None of the brush around him was broken. The simplest explanation felt right: he chose precisely this spot to lie down in peace.

By the next day, the maggots had come, a wave of them creek-lapping the banks of the body, eddying in shadows, lacquered in sunlight. I got down very close and yes, I heard them—soft shushes like carp mouthing along a pond’s surface.

In two more days, they’d pared the body back to hide, moving up the bone-cliffs and into the hollows, a tide floating parts of the wet world back to deep.

The maggots started from the hurt, open end—all hungers seek a way in through our wounds—and then advanced across the body. Standing back, the method’s clear: it’s not each on their own grabbing and looting, but a collective force working according to plan. (Some collectives are so much more easily loved; the murmuration of swifts en route to the Amazon, which spend weeks every fall here in Baltimore, reconvening at dusk above the Bookbindery’s old chimney. They circle in a darkening cloud until the last one arrives and then funnel in like smoke sucked back to a fire below, spark to ash, ash to wood, every element made whole and restored to its silence as evening comes on.)

It was the dark cave of the chest the maggots found next. They left the legs, mostly tendon and bone, too much work for too little harvest—wisdom we call it, to spend our energy efficiently. And the balancing of incoming and outgoing forces, all the cascades and contingencies ordered? Those are decisions. Nothing here is predator-or-prey. This is die-and-be-changed. Maggots are gleaners who find their way to fruited corners. They take nothing down. Beckoned, they come. Their feasting is perfectly fit to our need, clears a space for our living—or as humans inflect it, their work is performed on our behalf.

Maggots keep at it in all conditions—frost-sifted, heat-swelled. Somehow in this week’s pounding rain, they hold on and are not overcome by streams of mud and shifting ground.

After a few more days, they’ve moved so far into the chest I can’t see them, except for a swatch at the edge, wrinkling with movement like a shirttail untucked. Consider all they’ve worked through in just over a week: coils of intestines, liver, stomach, all the small hiddens, tough heart, heavy lungs. Every bit of muscle and flesh. The ribs are as clean as the staves of a barrel, a ship’s rigging, stripped beams. Such neatness! They moved every bit of indigestible hair and laid it aside, like a shadow cast or a blanket turned down at the foot of a bed.

Because I know the ways of my kind, how we cut the tethers and stopper the cycles, I was afraid the plume of rot released would call forth the human need to tidy, and soon a truck would come to cart the body away. Though a day later now the scent is more focused, sharp in the cold air, a sting not a muck, not so moist and mud-lofted.

To be with the rightness—my word for the work of restoration. Persistence in its various forms, the efforts of those who plant and tend, reclaim against odds (others, themselves), keep on with the heliotropics. The rightness has heft. It rides like a loose pelt over a bear. It’s how a poem lands in the body first. A commotion issuing from the edges, it sidesteps the notion of central command. It’s from exactly that place, two years ago now, this came—as sharp and clear as ice cracking, bright, bracing:

The creatures of this world have not been chastened,
are not subject to chastening
and are still blessable.

A voice that was not a voice spoke these words. No need to lay in my stability creds or preempt with “this might sound woo-woo but…” I have my practices. I know how to listen. I have been waiting for the moment of exposure, for these words to find themselves a context, to speak from a ground I might recognize and into an occasion presented: body of deer, work of maggots.

And what does the occasion bear along, in its meaning?

First, rest your attention on creatures—they have not trespassed. A creature is wholly unlike those who withhold themselves from the designation.

To feel chastened is to accept a quietude, the aftermath of having been warned but not having heeded, a space for reflection, since only after rumination can restoration begin.

And “still” blessable? Able to receive, even now, enduringly. And from who-knows-where—it’s the receptivity that matters. And being sought.

Blessing wants to land somewhere, to locate a body and go to work.

To sidle up then to creaturely ways? If I had to say so (and I’m working alone here), there is a chance for this still.

Forgive me for parsing the vision so badly. I have no elders to help me along, to whom I might bring this for illuminating, and who can design a more beautiful reading. Or fill in the creation part of the story, say the names, teach the practices of homage and reciprocity, and balance out all this end-driven angst. I work, as so many of us do, in exile from our deepest origins. Our tethers cut and practices stopgapped. Stories lost. Community frayed and DIY. My delivery is clumsy. I’m always in some state of jittery. But of this I am certain—the maggots: a current, bearing away. The deer: becoming dispersed, and more. What passes between them is a most ardent rightness.

And there are so many stories of rightness. That of the pin oak, told in four parts each year for decades, or, in the far slower tongue of Bristlecone pine, over the course of thousands of years. Story of peepers singing the teachings into their young as evening purples, then blackens down. Of crows, gathering in grief, their wailing and rending breaking into your peace. Turtles who made this world—or snakes, coyotes, buffalo, who come to speak it into being along the volcanic ridges at dawn, on moors and in canyons and mesas, for those who have been trained to hear. And here, today, right under my feet, the story told in hoofprints and mud. I squat down and hover a hand, fit my fingers to the teardrop declivities. It hardly takes much imagination, but it’s good to start small and work up: there was a body where now is my body.

Then: where mine is, there will be others.

Once you get that move down, consider more, with variations. Not the hard-and-fasts—the leanings. Bents and veerings. Sheer things. Wanings. All that is counter, original, spare, strange. The not squared but queered, the in-from-the-side and too often sidelined. A feel for the bodies of the used and weathered. An eye for filmy, silver-rashed mirrors. Singed wooden spoons. Quilts pieced from jeans worn for fieldwork and slaughter (that fieldwork and slaughter shadow each fiber). A sheen expressive of time passing and passed, the spotted and tarnished and oiled by hand use. Spaces that gather up mold, rime, and moss. Sunken, lopsided, softened, dried places. Slowed and quieted. The useful still. The scattering of burns on the sleeve of a coat that now bears a field of satin-stitched scars. The quieted, slowed, and useful still. I’m not suggesting an aesthetics of depletion (“from hunger” as my grandmother would say, pitiful, wanting) or an eros of the compensatory (settling for the insufficient), but that each moment of the cycle has always been with us, is here now, and each in its way keeps on giving—the fat green summer breasts of milkweed, their late fall silk offerings blown from their silvery cloven-hoofed hearts, up against the sadness of forced blooms in winter, those sugary oversweet paperwhites made to perform before their time, solo in their decorative pots.

Lia Purpura is the author of nine collections of essays, poems, and translations. Her work On Looking was a finalist for the National Book Critics Circle Award. Her awards include Guggenheim, NEA, and Fulbright Fellowships, four Pushcart Prizes, and the Associated Writing Programs Award in Nonfiction. She lives in Baltimore, Maryland, where she is Writer in Residence at the University of Maryland and teaches in the Rainier Writing Workshop’s MFA program. Her newest collections are It Shouldn’t Have Been Beautiful and All the Fierce Tethers.

Jia Sung is an artist and educator based in Brooklyn. She is currently an art director at Guernica, teaching artist in residence at the Museum of Chinese in America, and teaching artist at the Children’s Museum of the Arts. She has exhibited work at the RISD Museum, the Whitney Houston Biennial, and La Mama Galleria. She is currently a 2018–2019 Smack Mellon Studio Artist and recipient of the Van Lier Fellowship.

The Ecstasy of Reading (and Rereading) Anna Karenina 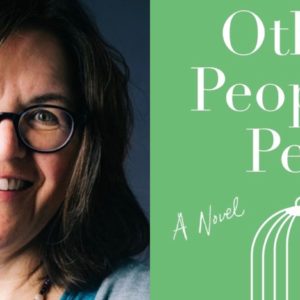