Jasmon Drain on What is Covered and Hidden

Maybe I’ll be wrong about this whole thing. It’s possible.

Hi there. I realize you don’t know me and perhaps never will, but I’ve always wanted a daughter, a little girl like you. Heck, I spent my life preparing, nervous about the opening of these very conversations. That’s sort of embarrassing since you still haven’t come. Yet sometimes, in the early mornings, when I’m jogging in a pickup truck’s trail and all the while assuming I’m alone, I’m rather grateful you haven’t. This talk I’ll now have with you anyway—before it’s too late… just in case.

Because you’ll certainly inherit the ambition of my eyes, teamed with dangerously darkened skin, my assertiveness, and long thinned toes to carry you through to… safety. Don’t interrupt. This is difficult enough so please listen closely. You’ll need this. It’s the only protection offered us.

Hold on! Wait-wait-wait! Don’t do that! Hold it in!

With one cough or sneeze that may bleed into a runny nose, you’ll be amplified in diseases, the vector of color ignorance, tied to what’s become the invisible and untouchable. Here, lemme’ check your temperature before I continue.

Not too long ago, coughing and sneezing meant very little, merely a non-violent part of being human. No worries, in these 50 you won’t often be considered that. You’ll be marked coming from me, delivered fully symptomatic, with those same said eyes, some rounded ears, the small bright teeth forming a smile people remember you for. As a result, you’ll be born with the first mask.

The dark-skinned one I mentioned? I apologize in advance. I REALLY do. Cause along with it, I’ll be forced to give you the second before you’re even a month old, the one attached to this addled letter. By then, I’m hoping to have strong enough memory of what you’ll look like. It shouldn’t matter that you’re covered and hidden. You’ll eventually get used to that. Hey, guess what? I actually tried to find a pink one for you. Nah, they didn’t have any. Sorry. But it’s not so big a deal. Now, tighten the straps. Can you breathe in it? Make sure to say it loudly if you cannot.

I’ll be hopeful they’ll discover you, fully receive the colors of your masks, then peel them off to hear and envision your delicate chest as it expands, just as I now do.

Huh? No, no, no. It’s unacceptable that you don’t speak clearly yet. You don’t have much time to learn this, so stop mumbling. Nice and plainly. No aggression. Say it slowly, as I do. There you go. Is the filter positioned? Good. In a few minutes, I’ll show you how to insert a new one. Yes, you’ll have to wear this mask your entire life also. There’s no vaccine for who you’ll be, or how you’ll be viewed, for the unseen nor visible parts that will be oft times assumed of you.

What you say? How does any of this affect you? Or wait, did you say in-fect? Is that what you said?

Fine. I’ll explain: Less than a year ago, the second mask would have panicked the liquor store owner on 69th and Halsted, and the white-coated CVS pharmacist with his windows shattered and shelves emptied. Your born mask brought fear. This new one redoubles it. He’d have called “them people” on you immediately. Even while tucked in my arms with a single barrette holding the ponytail choking three or four strands of your curly hair, you’d most likely have gotten stares. They’d have gaped at your saliva as it soaked my wrists like paint from a mural. Yea, I know they’re still looking now. Don’t be so offended. That’s not new. Because you’re just as unwelcome as before. As I was. But without this new mask and its germ blocking apparatus securely intact, you wouldn’t even be granted entry. Isn’t that odd? One mask keeps you out. The other allows you in. You choose which is which.

Please remember though, if I’m not around, let someone know if it’s hard for you to exhale in it, in either of them. Yell!—If you have to. Oh, that’s right… I said no aggression. How hypocritical. I can’t lie, my biggest fear is they won’t pay attention.

Aww geez, I’m being terribly unfair. It’s a bit much? I’m sorry for confusing you so soon. Shoot, by the time you’ll need to know this, that chain-store glass will be swept up. It was only broken in the silly belief that everyone should discard their masks. Was I proud of the attempt? Sure I was. Well, kinda. But I’ll be damned if I trust it going forward. With that said, I’ll go on wearing mine just to be safe. I’ll “yes suh” and “No suh” and make “no sudden moves” in the collapse of Chicago’s mile of magnificence, or in the Englewood liquor store where your saliva drools into a redder color. Maybe there I could be a tender of help, the second voice in wind. Plus, all this I’m dumping ain’t really yours anyway. It’s mine, you say? From my time? Nope, can’t be. What you mean that’s the way it used to be? Impossible. You telling me people won’t think like that no more? Things are gonna’ be different for you? Okay then… alrighty. I guess I can see it. It’s mostly mine. Cause when you told me earlier that breathing wasn’t so hard with or without either of your masks, I heard. I listened. For your benefit, I’ll spend another maybe or two believing you won’t have distanced picnics at Gwendolyn Brooks’ park; or in your time, jobs for working people wearing the essential and suffered colors of any mask will be aplenty, and not simply in box-shaped and under-waged corporate stores.

I’ll be hopeful they’ll discover you, fully receive the colors of your masks, then peel them off to hear and envision your delicate chest as it expands, just as I now do. As I’ve always wished to. Hmmmmm. Lemme’ think on it… Maybe I can try and look at it through your eyes. There’s a small chance it’s to be different.

In case though… juuuuuust in case I’m wrong about any of the nonsense we’ve talked about, put it on as a favor to me. This one favor. Put them both on with the filter I forgot to show you how to insert. Because maybe in the chances I spoke of, they’ll be blind to you as well. Possibly even deaf.

And I realize those are the maybes I can’t afford.

In Honor of the #BlackoutBestsellerList, 5 Audiobooks by Black Women 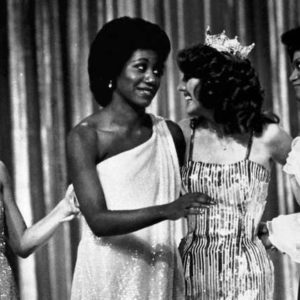 When would a woman of color become a finalist? Miss USA was already way ahead of Miss America in embracing diversity; its first...
© LitHub
Back to top