Samiya Bashir Returns From Rome to an Uncertain America

Oh, Dear.
Thrown away. Caught mid-toss.
I tried to write about everything except my own experience.
Time has come so untethered. Remember Tuesdays?
Everything remains unresolved.

I’m still, in theory, one of two 2019-20 Rome Prize fellows in Literature. This year marks the 125th anniversary of the American Academy in Rome; a rare two-poet year. Bold and brilliant Nicole Sealey holds the second prize.

We are, together, the Academy’s first Black women literature fellows. Ever. Being a Negro First(TM) just feels so last century.

I’m almost certain the Academy tried not to kick us out.

The days groundhogged and caught. Food was altered. Then adjusted. Then gone. Our lives were pieced apart and jumbled around with an almost-impressive opacity.

You ain’t gotta go home but you cain’t stay here is what I hear being said when I remember it. We’d stood a meter apart, for our safety, across the steps. Some of us, just away for a day or a few, were told remotely: You can’t come home.

I can’t remember the last time I’ve been this still.

And it was our home. And where were we supposed to go? Nearly everyone from New York had sublet their places. Someone else had just sold their home. I’d ended my lease months before landing in Rome.

I was given two days—okay, less—to un-home myself. Borders were closing, they said, for our protection. Pack a life. Leave a life behind. Thrown away, one or two of us stayed despite it all. Ghosted the empty city streets in search of shelter. Home.

For decades I joked that home was somewhere around 33,000 feet. No more.

Around dawn on the first day of spring we were flung, stiff-legged and bleary, from frying pan to fire. For our protection. The last Fellows in flight. The ways we clutched our rationed masks and overused gloves were, honestly, kinda sketch.

Fiumicino lay empty as old-timey Christmas Day. No Prada. No Gucci. No Valentino. Dark windows twinkled all their shiny things. Everyone tried to avoid eye contact.

Onboard we shuffled to separate corners, then again for more social distancing. A flight attendant’s ersatz alarm woke me when my mask slipped in my sleep.

Then magic and sisterhood and poetry and love and dreaming and trust all got together and gifted me a place to land by the sea. In one day. By nightfall. Imagine.

The first thing I saw as we landed ashore was a big-box store. Home.

At JFK someone tested my temperature on the jet bridge. I guess I passed. Then the constant assault of commercials. So many Cuomos. So many talking heads loudly declaring war. For my protection.

That our isolations showed not violence or oppression, but care seemed so basic when I left Rome that it remained unspoken. Now “shelter-in-place” was a canyon echo.

That language, it mattered.

“I guess a silver lining of all this,” I heard so often that I lost count, “is we get a break from school shootings.”

The Venetian etymology of ciao is one of enslavement. Whether coming or going one said s’chiavo: I am your slave. This was, I guess, in case someone forgot.

So much about home is buried beneath every breath.

A very fine person met me outside of Logan Airport to take me home. We followed highway 3 to highway 6 talking (mostly him) through politics, through life.

He’d spent years building his livery business, he said. By March he’d already had to let every one of his drivers go. Now he, himself, was back to driving.

I’d like to do, for once, not a damned thing. But then how will I matter?

He noticeably avoided praising or defending the president. No one wanted to fight that night. It was so late. I was so tired.

I couldn’t say whether it had been moments or millennia since our last masked goodbye outside of customs. Holding each other up. Taking pictures.

Now the house on the hill sat cloaked in new-moon darkness. Like me. Alone.

To matter. To be important. To signify.

So well-curated we were an accident. Our hodgepodge had lived together, traveled, studied, worked, and eaten together every single day. Six months. Longer than COVID.

At first all I could do was mourn us and all we’d left shattered atop Gianicolo. That our hill was named for Janus—two-faced god of beginnings and endings, doorways and gates, transitions and time—felt ominous after having felt just right.

Exile. Loss. My heart sinks. At least two of us likely contracted Corona on those flights back home. I spoke broken Italian for weeks, catching myself—un po ‘prima—each day.

This year threads its needle between robbery and gift; horror and beauty. Global trauma and lovely surprises.

Quarantines require preparation. What do I know from hunkering? Shopping and setup and space and supplies met most of us who went home, but I wasn’t home.

The refrigerator was so empty it shone. My phone was hooked up to all the wrong satellites. All day I went out of my way not to touch anything. I covered my face and crept the Cape gathering whatever I guessed might need.

Yes, toilet paper. Yes, tequila. Yes, flash-frozen soups and every kind of chip I could find.

I bathed in hand sanitizer at every stop. I tried to not be a stranger. I snapped through pair after pair of the latex gloves I’d been using to dip ink. I remembered that I’d left my ink atop Gianicolo.

That was the first day. There was another. And another.

It was good that I didn’t have to do anything because I could barely breathe. I made my quarantine phone calls. I attributed my breath, my tight chest, to everything except my own experience.

I was almost sure my life mattered.

The thing about 21st-Century Negro Firsting(TM) is that racism—the distraction of it as Morrison warned—is just so boring.

Yet another exhausting lack of imagination.

Our first “re-openings” were met by multiple mass shootings. We barely discussed it.

I want to cry from all this freedom.

Surfing a sandbar in the sea I confront what “home” means. I don’t know. I’m not actually surfing, because sharks, but I confront. I sat through Jaws at least twice now.

“My kids are on that beach too,” the Mayor of Amity Island said, a bit overdue. He’d been mocking the sheriff for insisting they close the beaches after another deadly outbreak of shark attack. Familiar? This time his kids were on the beach. This time the great white problem mattered.

“Biggest protest movement in American history” was a phrase which barely survived its own news cycle. No matter the nonstop marching, the nonstop murdering. No time to come home from a police-murder protest before another police-murder occurs.

So many of us set adrift at once. Either we can’t go home, or we can’t leave. Crisis after crisis kick-drops all our plans. Virtuality claims even our closest family and friends. All the wrong people keep dying alone. Behind glass.

Since day drinking and night sleeping both became available choices, I’ve struggled to stay present through the never-ending now. I can’t remember the last time I’ve been this still.

No flights. No road trips. No million places to be. A sweet old house by the sea where whole communities thrive between the walls like jellicle cats.

The thing about going, much less home, is how it shrinks all the surreal all the moments into just some things that happened. Anecdote. Questionable, even.

Winter finally turned to spring sometime around mid-summer on the Cape. Everything around me came alive. Difficult as we make it, the land seems to work best it can for now. And the birds. And their songs.

I’m happy to report, for instance, that the ocean is still here. I’ve checked. Often. I’m thankful for the tides at least.

Another great white chomped down a seal too damned near shore the other day which I know because this one not-a-stranger lady told me that’s what happened.

Looking east from our mountain of mess to Italy’s flattening curve hurts like fractured safety. So many of us saw the nightmare coming and tried like hell to avoid it. But here we are. Krugered.

Here I am. Locked down. Tensed up. On pause. Uncertain. One whole leap-year season in exile so far with no end in sight. Spent.

Everyone here wears a mask. The rare exceptions are, without exception, out-of-towners. You’d think this was Amity Island. Where did they come from? How did they get here? What have they brought? Why are they trying so hard to be strangers?

Days have begun again to take the shape of days. I look around and everyone seems to be doing things.

I’d like to do, for once, not a damned thing. But then how will I matter? I can’t always remember why these verbs become so transactional.

I’d been on the road twelve weeks already by the time I landed in Rome. This far below cruising altitude “on the road” is mostly what home has meant.

I’ve been anxious for months about driving again, Black, from viral coast to stubbornly viral coast. Just to land somewhere that still won’t feel like home. Assuming I survive. Then. Finally. No. I won’t go.

I’ll remember magic. Virtually reimagine my work. Embrace this gifted corner by the sea. Remain thrown away and netted and held and fortunate and terrified.

Getting on dusk now. I think how it’s always a surprise to find myself exactly where I’m supposed to be. Our lives insist on small miracles despite us.

I went to a restaurant again for the first time. I sat outside. I was as far away as everyone.

Samiya Bashir is the author of three books of poetry, most recently Field Theories (Nightboat Books, 2017), winner of the 2018 Oregon Book Award. A multi-media poetry maker, she sometimes makes poems of dirt. Sometimes zeros and ones. Sometimes variously rendered text. Sometimes light. Her work has been widely published, performed, installed, printed, screened, experienced, and Oxford comma’d. She theoretically lives in Portland, Ore, with a magic cat who shares her obsession with trees and blackbirds and occasionally crashes her classes and poetry salons at Reed College. However, as the 2019-20 Joseph Brodsky Rome Prize Winner in Literature, Bashir is currently in pandemic exile far from Italy and further yet from wherever home might be. 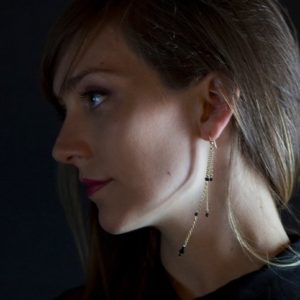 Catherine Lacey is Not Interested in Promises of Redemption “It’s nice to be a little unstuck in time,” Catherine Lacey told me, over the phone. “I’m always having to remind...
© LitHub
Back to top