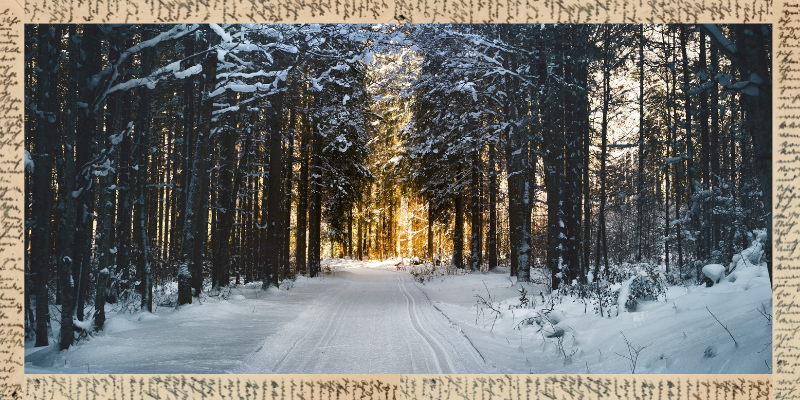 Let it snow: 6 of the best descriptions of winter weather in literature.

Oh, the weather outside is frightful! But the reading is so delightful… Weather (sorry) or not you love the snow—blanketing your driveway, stalling your subway lines—it’s hard to deny that there have been some pretty darn good descriptions of it in literature, the kind that make you want to curl up by the fire (or, in my case, the space heater). Personally, I think I like winter weather best when it’s on the page and not the thing standing between me and the closest bar or the corner bodega when I’m out of popcorn. In an attempt to reframe the cold months ahead for myself, I have assembled some of the most beautiful/relatable descriptions of snow I could find in fiction. Perhaps now I will think of it as one of these instead of being irrationally irritated by Mother Nature’s cruel attempts to curb my snacking and my social life. So, here we go: let it snow! Sit down with these delightfully icy passages, and keep the hot cocoa coming.

At first she was unable to read. To begin with she was bothered by the bustle and movement; then, when the train started moving, she could not help listening to the noises; then the snow that beat against the left-hand window and stuck to the glass, and the sight of the conductor passing by, all bundled up and covered with snow on one side, and the talk about the terrible blizzard outside, distracted her attention. Further on it was all the same; the same jolting and knocking, the same snow on the window, the same quick transitions from steaming heat to cold and back to heat, the same flashing of the same faces in the semi-darkness, and the same voices, and Anna began to read and understand what she was reading.

From Italo Calvino’s If on a winter’s night a traveler:

So here I am walking along this empty surface that is the world. There is a wind grazing the ground, dragging with flurries of fine snow the last residue of the vanished world: a bunch of ripe grapes which seems just picked from the vine, an infant’s woolen bootee, a well-oiled hinge, a page that seems torn from a novel written in Spanish, with a woman’s name: Amaranta. Was it a few seconds ago that everything ceased to exist, or many centuries? I’ve already lost any sense of time.

And here instead’s another version of what was happening that morning, as if from a novel in which Sophia is the kind of character she’d choose to be, prefer to be, a character in a much more classic sort of story, perfectly honed and comforting, about how sombre yet bright the major-symphony of winter is and how beautiful everything looks under a high frost, how every grassblade is enhanced and silvered into individual beauty by it, how even the dull tarmac of the roads, the paving under our feet, shines when the weather’s been cold enough and how something at the heart of us, at the heart of all our cold and frozen states, melts when we encounter a time of peace on earth, goodwill to all men; a story in which there is no room for severed heads; a work in which Sophia’s perfectly honed minor-symphony modesty and narrative decorum complement the story she’s in with the right kind of quiet wisdom-from-experience ageing-female status, making it a story that’s thoughtful, dignified, conventional in structure thank God, the kind of quality literary fiction where the slow drift of snow across the landscape is merciful, has a perfect muffling decorum of its own, snow falling to whiten, soften, blur and prettify even further a landscape where there are no heads divided from bodies hanging around in the air or anywhere, either new ones, from new atrocities or murders or terrorisms, or old ones, left over from old historic atrocities and murders and terrorisms and bequeathed to the future as if in old French Revolution baskets, their wickerwork brown with the old dried blood, placed on the doorsteps of the neat and central-heating-interactive houses of now with notes tied to the handles saying please look after this head thank you […]

From Donna Tartt’s The Secret History:

The snow in the mountains was melting and Bunny had been dead for several weeks before we came to understand the gravity of our situation.

The next day it was snowing and he went out for a pack of cigarettes and never came back. You sat on the patio drinking something warm and alcoholic, with nutmeg in it, and the snow fell on your shoulders. You were wearing a short-sleeved T-shirt; you were pretending that you weren’t cold, and that your lover would be back soon. You put your finger on the ground and then stuck it in your mouth. The snow looked like sugar, but it tasted like nothing at all.

From Charles Dickens’ A Christmas Carol:

Holly, mistletoe, red berries, ivy, turkeys, geese, game, poultry, brawn, meat, pigs, sausages, oysters, pies, puddings, fruit, and punch, all vanished instantly. So did the room, the fire, the ruddy glow, the hour of night, and they stood in the city streets on Christmas morning where (for the weather was severe) the people made a rough, but brisk and not unpleasant kind of music, in scraping the snow from the pavement in front of their dwellings, and from the tops of their houses, whence it was mad delight to the boys to see it come plumping down into the road below, and splitting into artificial little snow-storms.

The house fronts looked black enough, and the windows blacker, contrasting with the smooth white sheet of snow upon the roofs, and with the dirtier snow upon the ground; which last deposit had been ploughed up in deep furrows by the heavy wheels of carts and wagons; furrows that crossed and re-crossed each other hundreds of times where the great streets branched off; and made intricate channels, hard to trace, in the thick yellow mud and icy water. The sky was gloomy, and the shortest streets were choked up with a dingy mist, half thawed, half frozen, whose heavier particles descended in a shower of sooty atoms, as if all the chimneys in Great Britain had, by one consent, caught fire, and were blazing way to their dear hearts’ content. There was nothing very cheerful in the climate of the town, and yet was there an air of cheerfulness abroad that the clearest summer air and brightest summer sun might have endeavoured to diffuse in vain.