"He lived off his mother and off donations to his little Bolshevik Party."

History waits for no man. This was evidenced by the fact that the target of the Lenin Plot was not in Russia when the revolutions of 1905 and 1917 broke out. Lenin had been in Geneva as a political exile when he heard about the 1905 revolution. He was a refugee in Zurich when news of the 1917 uprising reached him.

He had sunk into himself during his exile years. Through his prodigious output at the typewriter writing about revolution, he had become a paper statue of his own ambitions. But after the failure of the 1905 revolution he was convinced that a second one might not come for many years, maybe not in his lifetime. Hence, he was stunned at the news in February 1917. He ran from comrade to comrade in Zurich seeking more information. When confirmation came, he decided to return to Russia and try to take over the revolution in the name of his Bolshevik Party.

One of the ironies of the 1917 revolution was that two of its major players, and bitter enemies, Lenin and Kerensky, came from the same hometown, Simbirsk, a sleepy Volga River community of 40,000 or so, east of Moscow. Lenin and Kerensky had attended the same high school in Simbirsk. Kerensky’s father was a teacher there and their families were friends. Simbirsk is now called Ulyanovsk, after Lenin’s birth name, Vladimir Ilyich Ulyanov. It has grown into a large and prosperous administrative center but is still noted for being the hometown of two of Russia’s most memorable political figures.

Lenin’s parents were conservative monarchists, and Ilyich was baptized in the Russian Orthodox Church, though he grew up to become a confirmed atheist. He never used his first name; to friends and family he was simply Ilych. His law degree from the St. Petersburg Imperial University got him work briefly as an attorney, but beyond that he spent his early adult life mainly as a propagandist for the Russian Social Democratic Labor Party. That was a Marxist group that wanted to unite all Russian revolutionary parties under their umbrella.

Their efforts failed, as evidenced by Lenin’s walking away from the SDs with his breakaway Bolsheviks (from the Russian, meaning majority). Because his family owned a farm, Lenin claimed to be a member of “the nobility.” But in Russia that simply meant he was not a peasant or worker.

Lenin was 46 years old at the time of the 1917 revolution. Despite his success in forming his Bolshevik Party, he was still basically what he always had been, a provincial bourgeois from a country town. He had grown up short and stocky like the peasants he so ardently hated, and as a young man he had red hair and liked rural pastimes such as hiking, skating, swimming, taking naps under trees, and hunting rabbits.

After 1905, Lenin spent his days studying for the next revolution, often pacing the floor and talking to himself passionately in public libraries.

When he ran out of shotgun shells he clubbed the rabbits to death. He was a neat dresser with reserved and correct manners, Victorian in thought and sedate in social behavior. He hated the clichéd revolutionary style of dressing in boots, army tunics, and leather caps, and preferred to wear a business suit, not expensive, but presentable.

As Ilyich aged he lost his hair and grew a beard. Lenin biographer Valeriu Marcu wrote that Ilych looked “mongol, with a strong jaw and the bright and humorous eyes of a smart tradesman.” He lectured with “the cut and dried finality of a dervish.” Lenin’s mind was quick and he was able to play two games of chess at once. But he possessed the arrogance and intolerance of a political elitist. Aside from peasants he also hated royalty and middle-class liberals. In his mind, liberalism led to tolerance and moderation, a surrender of revolutionary principles.

Lenin’s paternal grandfather had been a serf, the Russian equivalent of a slave. Lenin’s mother was the daughter of a Jewish doctor who converted to the Orthodox faith. Russian historian Dmitri Volkogonov wrote that Ilyich’s sister Anna in her later years contacted Stalin to explain that Ilyich came from a poor Jewish family, but that the anti-Semitic “Uncle Joe” fiercely covered up the information.

“Absolutely not word about this letter!” Stalin demanded.

Lenin also had German, Swedish, Kalmyk, and Russian ancestors. He might have inherited his flat face from the Kalmyk side. Lenin was at the top of his class in school and the favorite son in the family. That resulted in his developing a puffed-up superiority and a rude disdain for the views of others. Contrary to what some Soviet biographers later claimed, Lenin showed little interest in revolution when he was growing up. But when he was 18, a traumatic event turned him into a hateful, spiteful radical.

His older brother, Alexander, whom he looked up to, was arrested for plotting to assassinate Tsar Alexander III (1845–1894). Alexander III became tsar in 1881 after revolutionaries with Narodnaya Volya (People’s Freedom, or People’s Will) assassinated his father, Alexander II, the “liberator tsar” who freed the serfs. Alexander III started out as a serene ruler. He kept Russia out of war and was called “the peacemaker.” But as revolution threatened his rule he became cruelly autocratic. Many of his opponents were arrested and executed.

The Ulyanov family couldn’t believe that Alexander, known as Sasha, had been involved in an assassination plot. The boy was studying zoology at St. Petersburg Imperial University. He was one of the brightest students there and had seemed indifferent toward politics. But friends introduced him to the writings of Karl Marx, Friedrich Engels, and Georgi Valentinovich Plekhanov. Sasha’s comrades convinced him that only violence could stop the tsar’s oppression of the people. Alexander III had to be removed.

This little group was a self-organized terrorist squad modeled after Narodnaya Volya, which was suppressed after they killed Alexander II with a bomb. In March 1887, on the sixth anniversary of that assassination, Sasha’s group set out to bomb Alexander III in his royal carriage as he rode to St. Isaac’s Cathedral in St. Petersburg. But the police intercepted a letter written by a member of the group and rounded up the squad before they could strike. All were tried and sentenced to death.

Because of their youth, the judge offered to reduce their sentences to hard labor if they would ask for clemency. Sasha and four of his comrades refused. “I cannot do it after everything I said in court,” Sasha told his mother. “It would be insincere.”

The five were hanged at the notorious Shlisselburg political prison on the Neva River east of the capital. Throughout this whole affair the Ulyanov family was snubbed by friends and neighbors. Some refused to ride in the same carriage with them. Such humiliations hardened Lenin as he picked up the mantle of the revolutionary cause. Some say he named himself after the Lena River. Marcu said Lenin had been Sasha’s nom de guerre.

After joining the Social Democrats, Lenin was arrested several times for radical activities. He was exiled to Siberia for three years, and when he returned he tried to reorganize the SDs into a more militant group. That failed, and he walked out with his Bolshevik faction in 1903 , leaving the SDs in the hands of the tamer Mensheviks. One of the issues that caused the split was whether banks should be robbed to raise party funds.

Lenin ate in greasy cafés and eked out an existence that allowed him a new suit only every three or four years.

Lenin was all for such “expropriations.” In his view, they were just stealing what had already been stolen by the tsars. But in one spectacular fiasco, the Bolsheviks killed three guards as they stole 340,000 rubles, which they found were in such large denominations that they couldn’t be spent.

In the years between the 1905 and 1917 revolutions, Lenin and his wife Nadezhda (Nadia) Krupskaya lived in political exile in several cities in central Europe. Their rent was usually around 20 dollars a month. In Zurich their apartment was next door to a sausage factory so smelly they couldn’t open the windows. After 1905, Lenin spent his days studying for the next revolution, often pacing the floor and talking to himself passionately in public libraries.

He never hobnobbed with workers or peasants but read in books the things that got them riled up. Lenin lived off his mother and off donations to his little Bolshevik Party. He ate in greasy cafés and eked out an existence that allowed him a new suit only every three or four years. He was also trapped in a barren marriage.

Nadia was an intelligent, dedicated revolutionary who had been loyal to Lenin since the days when they were young Marxists together in St. Petersburg in the 1890s. But she apparently lacked the drive to establish independence from Lenin. Some said she was a better writer than Lenin but that he did not allow her works to be published under her own name because her talent would show him up.

It seemed that the best Nadia could do in life was to hitch a ride on Lenin’s shooting star. Lenin admitted that she served him well as typist, editor, and personal assistant. That seemed to be all he expected of her.

As Nadia got older she developed Graves’ disease, a glandular condition that left her with a bloated body and disfigured face. Her eyes bulged and seemed to leer at people. Some called her Fish. A story went around that Nadia was living proof that Lenin didn’t like women.

“In none of the mass of writing about Lenin is there any mention of an affair of the heart in his youth,” Volkogonov said of Lenin. “It appears that his preoccupation with books and revolutionary dreams left no room for the normal feelings that usually occupy the mind of any young man.” 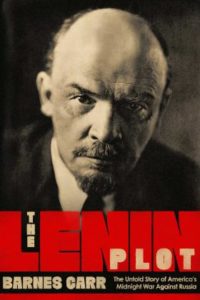 Excerpted from The Lenin Plot. Used with the permission of the publisher, Pegasus Books. Copyright © 2020 by Barnes Carr.

Barnes Carr was for many years a journalist for daily newspapers in Mississippi, Memphis, Boston, Montreal, New York, New Orleans, and Washington, D.C. He was trapped in New Orleans during Hurricane Katrina and the short story he wrote about the experience was awarded a William Faulkner Gold Medal. His first book, Operation Whisper: The Capture of Soviet Spies Morris and Lona Cohen, was published by the University Press of New England. Barnes lives in Houston, Texas.

Why You Won't Catch Dean Koontz Being Cynical 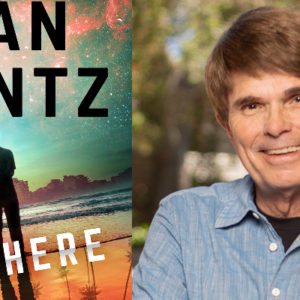 Why You Won't Catch Dean Koontz Being Cynical

Dean Koontz is the guest. His latest novel, Elsewhere, is available from Thomas & Mercer. From the episode: Brad...
© LitHub
Back to top
Loading Comments...