From Her New Collection, Thoughts and Prayers

A gloss and a hair mask.

The best headlines have internal tension.

Band-Aids with emoji prints. I’ll Venmo you. We really need concealer for our eyes. For everything.

A general practitioner available only through the special paid subscription service.

Bush I celebrated for his decency, even by Democrats.

On C-SPAN I didn’t move my face when I responded.

I did this to maintain my aura of authority.

“Where do we go when we die?” is bro humor on a Stephen Colbert skit.

No wonder so many people are religious.

My daughter holds her ears during the loud drumming of the indigenous children’s play.

It may be sensory avoidant or it may be childhood.

No sulfates, no problem.

A professor of networking.

Climate-weirding: birds of the city shock us with their seasonally appropriate appearance.

The sensitivity reader made to withdraw his own book from publication due to alleged insensitivity.

Prestige TV is the new Romanticism.

Is that man actually looking at me?

The billing department ultrasound bill is $736 and according to the supervisor all unpaid deductible.

I told an older man in a Dr. Zhivago–style hat and moustache (masquerade?) to lower the volume of his cellphone video on the subway.

And now another school holiday for a very minor saint: the school’s founder.

One woman in the South told me how she drives to the NICU so she can feel better, just going there, just holding the babies.

Climate weirding: no lobsters left to catch in Rhode Island.

“Dr. Zhivago” on the subway told another man I was obnoxious (meaning female?), without ever addressing me.

On a C-SPAN show about inequality, right-wing callers tell me that immigrants steal their jobs.

Bush II is now a Sunday painter, his works depicting the very soldiers whose mutilation he ordered.

I changed subway cars to get away from “Dr. Zhivago”’s insults.

His commentary is now called microaggressions.

How many times such things had happened to me before and I hadn’t called them anything.

The indigenous children’s play made me take “Mother Earth” seriously.

In a hysterical touch, my “organic” makeup is called Vapour.

My daughter’s face illuminates me. 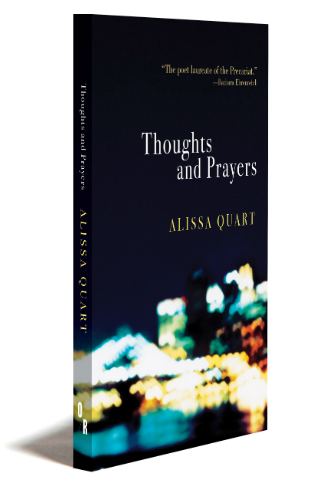 From Alissa Quart’s Thoughts and Prayers, available from O/R Books.

Alissa Quart is the executive director of the Economic Hardship Reporting Project. She is the author of the poetry collection Monetized and four non-fiction books: Squeezed: Why Our Families Can’t Afford America, Republic of Outsiders, Hothouse Kids, and Branded: The Buying and Selling of Teenagers. Her poems have appeared in Granta, the London Review of Books, and The Nation, among many other publications. She writes The Guardian’s “Outclassed” column and contributes to a range of publications including The New York Times and The New York Review of Books.
Share:

Rich Cohen on the First Gangster of New York City 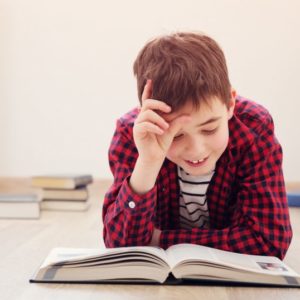 Is a Good Book a Good Book No Matter How Old You Are? In June, The Washington Post published an article entitled “Books for the Ages,” a list of book recommendations based...
© LitHub
Back to top
Loading Comments...