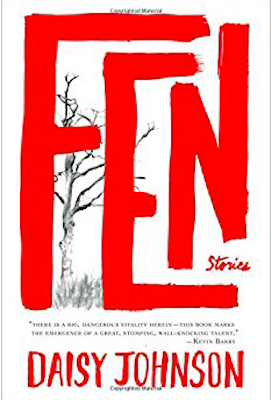 The following is from Daisy Johnson’s collection of stories, Fen. Set in the fenlands of England, Fen blends folklore and restless invention in it's portrayal of women testing the limits of their power. Daisy Johnson was born in 1990. Her short fiction has appeared in the Boston Review and the Warwick Review, among others. She was the recipient of the 2014 A.M. Heath Prize, and currently lives in Oxford, England.

She wished someone had told her what living with a man was like. She would not have changed tack but she thought, all the same, a degree of warning would have been good. The musky smell; the stains on the toilet he did not seem to see; the handfuls of tissue she pulled out from down the side of the bed. There were days she thought on what she’d given away. Days she tried to read two books at a time to catch up. Days she went into the city and handed out CVs and saw what little she could get with good marks at school and an attractive husband.

Even then there was never a consideration of going. The shape of him beneath her hands in the morning, the words he said when he was sleepy enough not to think about them, the way he remembered things she told him.

Well, except Harrow had died. Barely a year and she only 19, but there it was. She stood next to his mother at the hospital and thought she understood what they were saying except she was certain they were wrong. There wasn’t a blood clot in his lung that had, probably, been there since he was born and only now exploded. That was not what had happened. Harrow, she was certain, had died because he decided he loved her after all. He was an eight or a nine and she was a three or a four and the maths of that all added up to Harrow never having been hers to begin with.

At the funeral her parents told her she had to come home, had to grow a life out of whatever she had. They talked about universities and scholarships and jobs in the city and fish in the sea. They were the way she used to be, she saw that now: they were doers. She told them she would get around to it but right now she had to look after Harrow’s mother and she hoped they understood.

She was called Sarah and was older than most of the other parents. Nora thought her sort of beautiful; she looked, anyway, a bit like Harrow and held herself in the same unselfconscious way. She’d not seemed to have much comment to make on them marrying but she had, Nora thought, liked her.

Those days Sarah didn’t always seem to know where she was and sometimes she talked about Harrow as if he’d just gone out for a stroll or was running errands. Though these were not things Harrow would ever have done.

Nora did the cooking and cleaned and the rest of the time she read or sat in the sort of stupor that comes from losing the trick of sleeping. She didn’t try any more. There wasn’t any use trying once it had gone that way.

Nora knew what people said about her. She was up-and-down odd and now Harrow was gone she should move on into a life that more befitted a broad-hipped, glasses-wearing girl who looked—well, it was fine—old before her time.

Part of her always thought Harrow would come back. Maybe she thought it because they were particles entangled. Or because her want was surely strong enough to curse him awake. Or because she’d given up things and—a balancing—needed something in return.

In the end it was none of these things. It was only Sarah.

What are you doing? Nora asked when she found the fragments of tiny animal bones in the bin, tripped over piles of smooth stones in the front garden, tried to make sense of the small dirt offerings: in a cup in the airing cupboard, under her bed, in the bath.

Sarah would not answer her, went out into the garden with her mixing bowl.

When Harrow came back Nora decided she wasn’t going to overthink it. Only be a little grateful she hadn’t argued harder for a cremation the way she’d wanted to.

There was dirt all over him and he must have—the way they did in the films—dug himself out because there was blood on his hands and most of his nails were cut badly.

Sarah had brought him back, wished him out. Still—she put the kitchen table between her and him and, scouting around for something to wield, picked up the rolling pin and held it at chest height.

It’s all right, Nora said. She held her hand up to Harrow’s mouth. He pressed his lips to it hard, leaving a dirt-shaped kiss, and she saw that he was just as relieved as she was.

Let’s run a bath, she said. He’ll be fine when he’s clean.

She took off his suit in the bathroom and then poked and prodded till he climbed into the hot water and stood, arms swinging a little. He wouldn’t sit down so she got the sponge and scrubbed until he looked as clean as she could manage, then she toweled him down. He didn’t say anything, though he followed her motions with his eyes, touched her hands. She didn’t say anything either, only waited. Outside the bathroom she could hear Sarah waiting too.

There were signs she could have read off him that she did not see or chose to ignore: his breathing high and a little labored, as if air didn’t work well in him any more; the odd smell of him: like concrete setting or the cold dredged up on riverbanks.

In the morning she turned in the bed and he was looking at her the way he used to across the classroom or as they passed in the hall when everything they were doing was a secret so he could save face. She felt the rise of him against her leg, held him in her fist and moved her hand. A little later, feeling the comfortable known of his hips against hers, she thought that his time away had lost them nothing, had given them only a perspective of loss. A knowledge of absence. Except, when he arched back his head, mouth open, and let out a one-syllabled word, there was a sharp pain in the roof of her mouth. She rolled out from under him. He lay back, one hand under his head, sweat on his forehead and neck.

Are you all right?

She put a hand over her lips, eyes watering, probed the roof of her mouth with her tongue, felt the pulse of ulcers gathering in rings.

It was clear now: again the skid of hurt against her teeth at his words. She rocked back off the bed, one hand warding him away, though he followed, dog-like, reaching out. She caught the door in her fist, shut it between them. His voice, coming muffled through the wood, burnt her mouth and eyes.

What is it? Sarah said, coming down the hallway.

The impact of Harrow’s language on Sarah seemed much worse than it was on her—a single syllable eliciting vomiting, sentences starting nosebleeds—so Nora took Harrow to the garage and sat with the door pulled closed.

She told him she didn’t care. Turned the light out so he couldn’t see what was happening to her. Gripped him by the wrist and told him what to do.

They tried out all the letters one by one, cycling through the alphabet twice until she dug her nails hard into his palms and then he was quiet. They worked through nouns, verbs, adjectives. She made him try out adverbs, pronouns and prepositions. She tested herself by waiting for pain, noting down the area and velocity at which it came. When a word seemed to elicit less pain or appear in an area which seemed less extreme (for example her arms or legs as opposed to her face or torso) she squeezed his hand twice to make him repeat it. Mostly the word repeated would bring on pain in a different area or of a different type and then they would carry on. If the word caused in any way a similar reaction she noted it down.

At first the word ‘partial’ seemed to have a reaction less extreme than others. This was later proved to be otherwise. At first the phrase ‘wanted scrabble she’ appeared to elicit pain after a longer than normal waiting period. This too turned out to be incorrect.

But if anyone could fix him it was her.

She caught the neighbor’s rabbit on one of its escape trips and brought it down in her arms into the garage.

He wrote: That’s enough. I don’t need to speak.

She held the rabbit, not wriggling, only sniffing a little, in her arms. Come on, she said.

He wrote: Fuck you backwards with a broomstick.

She told him to go through his consonants the way they’d done before and she would tell him when to stop. She sat numbly as he did it, holding the rabbit. It fought her. She could feel his words on its body.

Later she went round with the rabbit in a plastic bag, told them she’d found it in the garden.

From Fen. Reprinted with permission of Graywolf Press. Copyright © 2016 by Daisy Johnson. 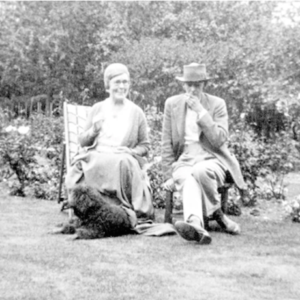 Lit Hub Daily: May 17, 2017 On Rachel Cusk, Joanna Walsh, and the price tag of being a woman. | Literary Hub Julie Buntin on the joys and tragedies...
© LitHub
Back to top