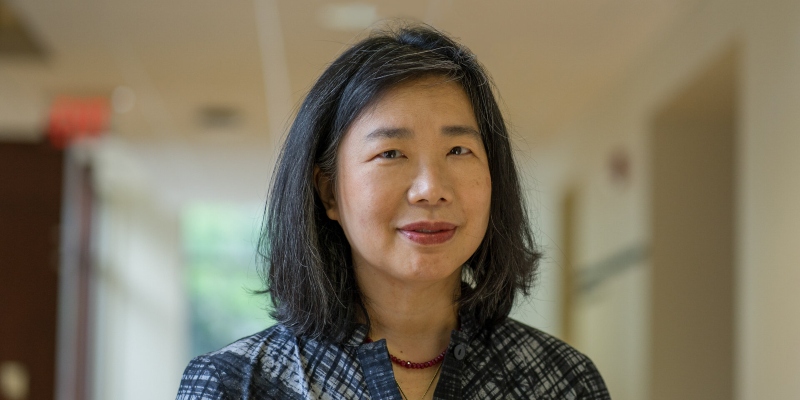 Novelist and Iowa Writers’ Workshop director Lan Samantha Chang joins co-hosts V.V. Ganeshananthan and Whitney Terrell to discuss her new novel, The Family Chao, an homage to The Brothers Karamazov centered on the title family’s Midwestern Chinese restaurant. Chang talks about how the three brothers of her story and their varied relationships to identity reflect their parents’ changing circumstances. She also discusses how Asian American and immigrant narratives are evolving to reflect new generations, Asian American life in the Midwest, using humor to subvert cliches, and how directing the Workshop has altered her approach to writing.

The Family Chao • Hunger • Inheritance • All is Forgotten, Nothing is Lost

Whitney Terrell: Much of the drama in your book centers on the Fine Chao, a restaurant run by the family of the title. In my neighborhood, there’s a popular local Chinese restaurant called Kin Lin. I’ve had hundreds of meals there over 20 or 30 years. I’ve always thought when I go into it there’s a story here that I don’t know, and there’s this whole complicated life happening. You know, they’re in the kitchen and behind the counter of the restaurant, and I want to figure out what it’s like. And suddenly, here’s your novel that does just that. How did you decide to choose food as an organizing theme?

Lan Samantha Chang: I didn’t actually start with the theme; I started with the setting. And the setting started with the story. So I wanted to write a succession story. I considered the question of what would be the object of contention. And so thought about a family business, which, of course led to the consideration of a restaurant because, you know, a restaurant is one of the quintessential immigrant family businesses. The restaurant seemed like a great setting place for some of the major scenes. And then finally, I’m obsessed with eating.

My parents were immigrants, new to Wisconsin back in the ’60s and ’70s. In the mid-’60s, there was nothing Asian to eat in Wisconsin. My parents had to go to Chicago and buy big supplies like soy sauce, and then they would come back to Wisconsin and buy their groceries at the Red Owl supermarket. And they would stir-fry lettuce, iceberg lettuce, and things like this. So we’ve all, as a family, been obsessed with food for decades, particularly Chinese and Chinese American food.

V. V. Ganeshananthan: So there are, of course, lots of opportunities and also complications to writing about food. One of the plot points of the novel—which we’re going to be vague about to avoid spoilers—involves the white fascination with the old racist trope that Chinese and Chinese Americans like to eat dog meat. And I’m really curious to hear you talk a little bit about how you write about a particular national cuisine whose surface, as Whit points out, is so prevalent in America that it becomes a cliche? How do you subvert the cliche rather than reinforcing it?

LSC: Ultimately, I didn’t start with the idea of the dog meat—it arose out of my drafts. And I think that it really came out of the humor that I was using in the book. The book has a different tone from a lot of my earlier work, and it’s broader than my earlier work. And so I was able to use humor; I was able to include the cliche and make it ridiculous through the use of humor. I thought about using an outsider perspective, ultimately, to create a comedic distance, and provide a slant on American culture.

Also, with the dog meat, I wanted to incorporate all different perspectives. I used different voices—particularly in the second half of the book—there’s a comment section. I wanted to provide a kind of dissonant Greek chorus to the story that was happening.

WT: The other thing that’s nice about a restaurant as a physical setting is that lots of things can happen, right? There are physical places, there’s a freezer, there’s… and so you have that sort of dynamic. I’m just surprised… I’m trying to think, and maybe you’ll tell me one that I’m completely, foolishly ignoring, but I couldn’t think of a novel that used a Chinese restaurant as a central location.

LSC: I think there are a couple. I just don’t remember what they’re called. They’re not books that I’ve spent a lot of time reading. So you know, it was new for me as well.

WT: It surprised me when I thought about that, because I think it seems like such a great place to set a book. I’m glad that you went ahead and filled that gap.

VVG: I can think of a couple. I recently taught Celeste Ng’s Little Fires Everywhere, which has a Chinese restaurant that plays a role in the plot. And then there’s Lillian Li’s Number One Chinese Restaurant, which is actually set near where I grew up in Maryland. And so as I was reading your book, I was like, could I teach a whole class that has to do with this?

LSC: I was thinking about Babette’s Feast. Like Isak Dinesen. I was thinking about the food reading that I’ve done as I was growing up and learning to cook. I found Babette’s Feast particularly interesting because it’s basically about the preparation of a big meal, and so is my book. One of the first ideas I had for a book that became this book, a first idea that went into this—I found it in my journal from 4 million years ago—it was: The story takes place in one evening. It is a huge dinner party. That was what I wrote in my log. And essentially, that’s what happens in this book. It’s about the preparation for a huge dinner party and then the aftermath of the party.

WT: It’s so funny to have mentioned Babette’s Feast. That’s like our generation’s movie. I remember my uncle who was a painter coming and telling me I’ve got to see this movie Babette’s Feast. It’s really great. And going to see it at the art house theater in Kansas City.

LSC: Yeah, I think I’ve seen the film, but what I read over and over was the Dinesen tale.

WT: Oh, yeah, I actually have never read that.

WT: Okay, so this book is an homage—speaking of other famous books—also an homage to Brothers Karamazov. And you have a funny pun on that in the book. And that novel, like yours, is beautifully populated. The patriarch and matriarch of the Chao family are Winnie and Leo, and they have three sons. Is it Dagou? Is that the right way to say it?

WT: Dagou, Ming, and James. Can you introduce our listeners to your characters and explain their various romantic entanglements?

LSC: Oh, yeah, sure, romantic entanglements. There are three brothers. So the oldest is Dagou, big dog, and he is involved with two different women. His fiancee, Katherine, and the new love of his life, Brenda. Dagou and Katherine had been together for 12 years, and she’s like a member of the Chao family, and Dagou wants to break up with her. And he wants to date this hot American white woman, Brenda, but Katherine won’t let the relationship end because she values her connection to the Chinese American family, the Chaos. Katherine is of Chinese descent, but she’s adopted. She’s especially attached to not Dagou, but his mother Winnie, who’s like the Chinese mother she never had.

But then Winnie has three sons and no daughter, so Katherine is like the daughter that Winnie never had. Ming, the middle son, is pretty much in love with Katherine, which would solve all the problems, and she’s perfect for him. But he can’t date her because of his own self-hatred; he won’t date Asian women. And the irony is that Katherine, of course, was raised in a white family outside of Asian culture—she just looks Asian. And then finally, there James, the youngest son, and Alice, his childhood sweetheart. And that is one of the sort of long lines of the book, like James is sort of falling in love with Alice and what happens.

VVG: It is such a great dynamic to watch play out over the course of the book. 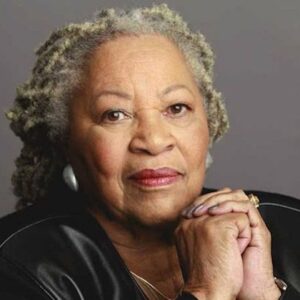 The very first time I saw Toni Morrison in person was at an event in Boston, at a church, along with hundreds of people....
© LitHub
Back to top