In a decision that feels perfectly timed to keep last week’s cancel culture debate (part 327) going strong into this week, Lambda Literary preemptively removed the writer Lauren Hough from an awards shortlist because of recent “Twitter disputes.” According to a Substack post by Hough, after being informed a few weeks ago that her debut essay collection, Leaving Isn’t the Hardest Thing, was a finalist, she received a follow-up email last week withdrawing the honor (presumably before Lambda announced its award finalists). Hough posted a screenshot of the second email: 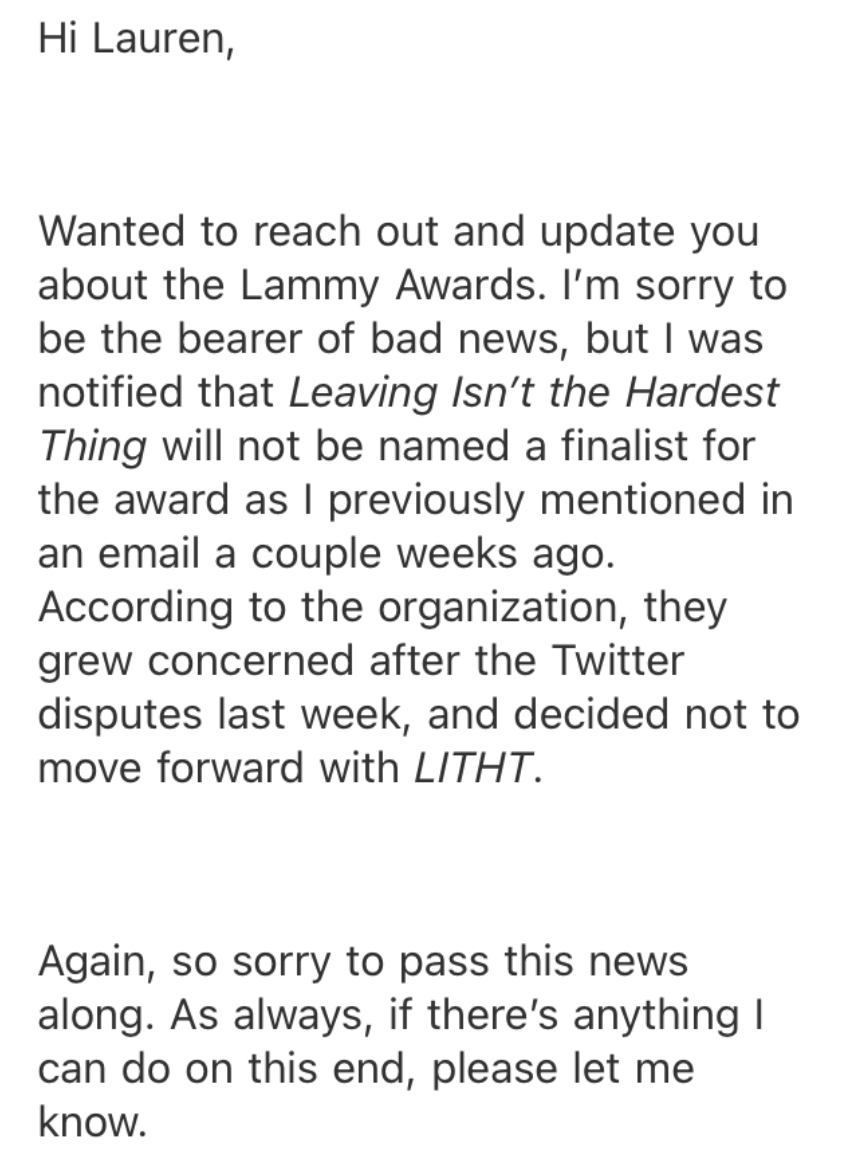 As Hough outlines in her post, the “Twitter disputes” in question refer to her defense of novelist Sandra Newman, who came under attack on Twitter—and not simply from YA Twitter, as Hough suggests—after posting about her forthcoming book, The Men, which takes place in a world absent people with a Y chromosome. As a sociopolitical/moral thought-experiment, this is a premise that warrants a nuanced and thoughtful approach to how we think about gender and sex. Like virtually all of the people attacking Newman’s book, I haven’t read The Men, so I cannot say if it handles the subject of gender and sex with nuance and intelligence; but based on their past public writings, I am inclined to give Newman the benefit of the doubt.

But this isn’t about Newman being denied an award (and the money that comes with it); Lambda Literary withdrew its nomination of Hough for defending Newman on Twitter. Hough, who can be very aggressive on Twitter, repeatedly doubled-down on her defense of Newman, and was belittling and hostile to trans people on Twitter. And contrary to many of Hough’s attacks, trans people did read the book and offer deeper responses as to why they found it harmful.  The crux of this issue was whether or not Hough’s Tweets warranted Lambda’s withdrawal of the nomination.

As Hough wrote, in her defense:

I’d read the book. Sandra Newman sent it to me in an early form and I gave her a few notes, like we do for one another. I’m not transgender and neither is Sandra (Sandra is nonbinary), but we discussed how to make the book recognize the reality of transgender people. Other books that started from this premise—all the men disappear—have erased the existence of trans people, and it was important to her not to do that, to be as sensitive as possible. So when I saw people assuming that simple idea was the entirety of the plot, I told them to read the book before assuming the worst. For this, I was labeled a TERF.

I’m not a fucking TERF. No reasonable person could think I’m a TERF. It’s actually quite easy to find out whether or not I’m a TERF. All you have to do is ask me, or spend two minutes scrolling my twitter timeline. Sandra Newman isn’t a TERF either, something that can be easily discovered by the same methods.

Is Sandra Newman providing artistic/intellectual cover for those who would deny basic rights to trans people, who would seek to make trans people’s very existence a subject of debate? This does not seem to be the case. Is Lambda Literary making it easier for anti-trans activists to cry “cancel culture” at every instance of public criticism? Yes.

This decision by Lambda Literary is nothing more than the worst kind of “guilt by association.” And it is bad.

[Ed. This post has been updated with links to some of Hough’s tweets in an attempt to provide more context for Lambda’s decision.]