Laila Lalami: “I Think Evil Needs to Be Called Out.”

Shortly after Moroccan-American writer Laila Lalami sent out the galleys for her magnum opus, The Moor’s Account, in the summer of 2014, she headed to Wyoming for a well-deserved sojourn. “I took a deep breath and said, okay, I really need a break, and my next book definitely won’t be a work of historical fiction,” she recounted with a chuckle.

For almost five years, Lalami had labored over the intricate historical details of the fictional memoir, which chronicles the untold tale of Mustafa ibn Muhammad ibn Abdussalam al-Zamor, an enslaved African said to be the first black and Muslim explorer. Named Estabanico by his Spanish master, Mustafa was one of just four survivors of the ill-fated 1527 Narvaez expedition to Florida, and yet his story had been all but omitted from most accounts of the journey.

To build an authentic 16th-century world steeped in colonialism, racism, and early permutations of toxic masculinity, and to tell the story of Mustafa from his own perspective and in his own authentic voice, Lalami pored over hundreds of pages of historical texts. The author carefully studied everything from the fabrics the explorers wore and the dialects they spoke to the supplies they carried and the weaponry they wielded. (Lalami would later become a finalist for the Pulitzer Prize in Fiction.)

During the trip to Wyoming, Lalami received a harrowing phone call from her sister that spurred the idea for her new and much-anticipated novel, The Other Americans. Her father was seriously ill back home in Rabat, to the extent that the family was certain he wasn’t going to make it. “It’s every immigrant’s nightmare,” Lalami said, “the idea that you’re going to get a call or text in the middle of the night and you’re going to be thousands of miles away from your family when they need you.” Lalami cut her break short and flew to Morocco, where her father fortunately recovered from his illness.

The Other Americans expertly captures the state of America today by offering readers a panoramic view of its fault lines.

But after returning to California, where she lives and works as a professor of creative writing at the University of California at Riverside, Lalami couldn’t shake the fear of losing a parent while living at a distance from them. She took that fear and used it as the basis for The Other Americans, hoping to exorcise the unsettling feeling by examining what it might be like for an immigrant to be hurled into an unending state of grief and sorrow. At the time, hate crimes and politically motivated attacks against Arabs and Muslims were on the rise in America. And so Lalami decided to incorporate the political milieu into the novel, filling it with aggressions—both micro and macro—against immigrants, people of color and other minorities.

“I was thinking about the characters as people who feel their voices aren’t heard or included in the national conversation. In that sense, they’re ‘other,’” Lalami said of the book title.

The Other Americans expertly captures the state of America today by offering readers a panoramic view of its fault lines, from the standpoint of a novelist who some might consider an “other.”

The timely novel centers on the suspicious death of Driss, a Moroccan immigrant. Driss’s passing destabilizes his immediate family and sends shockwaves throughout a tight-knit community in a small town in the Mojave Desert. The book’s chapters are taut, rarely exceeding ten pages at a time; the author jumps from character to character as a gripping murder mystery and love story unfold in tandem. “I wanted to include different perspectives that never meet, and that altogether give you a sense of where America is at this moment,” Lalami said.

Most of Lalami’s characters happen to be of an immigrant background; all of them are in pursuit of the so-called American Dream and the prospect of upward mobility, which seem to be achievable only through integration. There is no one “immigrant story,” Lalami stresses—America is home to over 40 million immigrants, after all—and each of the novel’s characters carries a unique, standalone tale, filled with secrets and convoluted backstories.

Driss’s widow Mariam is initially ecstatic to have left Morocco, for example, but soon after finds herself longing for it. In one scene, while shopping at a supermarket, she catches the scent of rosewater from a passerby, and is catapulted into a despondent state of homesickness. “There’s an entire gamut of experiences that can be subsumed under the experience of migration,” Lalami said.

That said, the writer refuses to present those experiences as necessarily tragic, positing instead that the reality of immigration is an integral and inevitable facet of the human condition. “Migration is the oldest story of all,” she said. “My work is concerned with the transformation of identity, and how migration contributes to that transformation.”

In 1992, Lalami left Rabat at the age of 24 and moved to America to pursue a doctorate in linguistics. She never intended to settle in the US and had in fact hoped to return to Morocco to become a professor there. But “life intervened,” she said; she earned her Ph.D., secured a teaching job, got married, and ultimately became a naturalized US citizen who put down roots in LA. “I became an immigrant by choice and by chance,” she said.

Lalami’s hyphenated identity and personal experience with immigration have informed her writing in delightful and unexpected ways. To read Lalami’s work is to go on myriad journeys with her, from continent to continent and over the course of centuries.

There’s a foresight to even her earliest books, which mostly dealt with her homeland. In the opening chapter of Hope and Other Dangerous Pursuits (2005), Lalami’s debut, centering on the phenomenon of immigration from North Africa to Europe, a group of migrants makes a treacherous journey by boat across the Straits of Gibraltar, bringing to mind, of course, the journey that has been undertaken by Syrians and others fleeing war and persecution across the Mediterranean more than a decade later.

The protagonist in her second novel, Secret Son (2009), moves from the slums of Casablanca to an upper-class neighborhood, giving readers a snapshot of how class struggles can encourage the growth of radicalism in politically unstable societies. And in the Moor’s Account, perhaps her most ambitious work to date, Lalami tackles head on some of the atrocities of colonialism and the follies of Orientalism.

Taken as a whole, her work forms a constellation of stories about immigration and all its complexities under the motif of survival. In the process, Lalami has become an authority on what it means to be plucked from one’s homeland and to endure what is referred to in Arabic as al-ghorba, the angst that accompanies living in foreign lands.

Born in Rabat to a working-class family, Lalami grew up in a house filled with books, wanting nothing more than to become a writer. While her parents hadn’t attended college, she said, they were avid readers—by night, the bookish family of six would curl up with novels and read for hours at a time. The Lalami library was filled with an assortment of works spanning numerous genres: spy thrillers, science fiction, memoirs, and biographies all filled the shelves.

At six, Lalami gorged on French comics, including the Adventures of Tintin and Asterix before gradually working her way up to novels such as The Three Musketeers and The Count of Monte-Cristo, also written in French. At 9, she finally put pen to paper and started writing “little stories” in her bedroom, injecting French colloquialisms and mannerisms into the text.

While Arabic is Lalami’s native tongue, she had attended a French school where she was immersed in the foreign language as well as the “colonial gaze” that so often accompanied it. Lalami noted she was cognizant even then that she couldn’t find herself in the stories she so enjoyed.

“When all of the works of imagination you see are represented in a different culture, it makes it seem as if only that other culture is worthy of your imagination,” she said. “It was a revelation when at 12, I opened a book by a Moroccan author and saw myself in that book.” Among the Arab and Moroccan writers she cites as influences are Driss Chraïbi, Tahar Ben Jelloun, Fatima Mernissi, and Leila Abouzeid.

As a teenager and into her early twenties, before moving to the US, Lalami mostly wrote in French. Afterward, trapped between languages, and burdened by the idea that her Arabic had suffered as a result of her submersion in French, Lalami abandoned writing fiction in French altogether, however, feeling it carried “colonial baggage.”

“There are some unsavory characters in The Other Americans … but I don’t write about them as if I’m judging them; I’m trying to listen to them.”

At the University of Southern California in the early 90s, Lalami focused solely on her dissertation, which dealt with how humans process sentences. It was highly analytical work, she said, but she benefited from the research skills required of doctoral candidates.

Lalami described academia as less fulfilling to her than her fiction writing practice. And so she “tried her hand” at writing fiction in English, deciding that she would write with the very specific intent of being heard by others.

That third linguistic way allowed Lalami to explore storytelling with a fresh pen. Mastering another language, she felt, helped her shake off the linguistic remnants of French colonialism, and she ultimately turned much of her attention to pressing matters in contemporary America.

As a disciplined and prolific writer, Lalami adeptly moves between fiction and nonfiction. She writes for a minimum of two hours daily from a study at her home, sometimes running into eight if she’s feeling especially invested. “Writing is word after word and sentence after sentence,” she said. “That is how books are written. I’m a big believer in that kind of work ethic.”

Lalami comments on timely national affairs in a column at The Nation, named “Between the Lines.” She regularly takes aim at the Trump administration, particularly its policies on immigration, in the column and elsewhere. She’s also an avid and occasionally viral Tweeter, with a following of almost 40,000.

Lalami’s next release will be her first book of nonfiction. Titled Conditional Citizens, it delves into the relationship between the individual and the state, examining how that relationship is undermined by variables including race, gender, and, sure enough, national origin.

The idea had been lingering in the author’s mind for a while, she said, and the timing—with publication slated for 2020, the year Americans head to the ballot box for what will prove to be a deeply existential moment for the country—feels just right.

“When writing fiction, I withhold judgment. There are some unsavory characters in The Other Americans, for example, but I don’t write about them as if I’m judging them; I’m trying to listen to them,” she said. “Nonfiction is something else. Carrying a child away from their parents and putting them in a jail in the middle of the desert is completely immoral. I think it’s evil and it needs to be called out.”

Zahra Hankir is a London-based freelance journalist. She is the editor of Our Women on the Ground, a book of essays by Arab women reporters who reflect on their experiences covering war and their changing homelands, due for publication by Penguin Books and Harvill Secker in August 2019.

Nathan Englander on Writing and Worrying 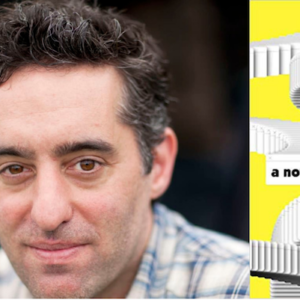 Nathan Englander on Writing and Worrying Nathan Englander's latest novel, Kaddish.com, is available from Knopf. * What do you always want to talk about in interviews...
© LitHub
Back to top