“In some places we’re popular. Some places no one has heard of us.”

The following is from a 1990 pre-show interview Kurt Cobain did with WOZQ Northampton, the campus radio station for Smith College. Excerpted from Kurt Cobain: The Last Interview: And Other Conversations.

WOZQ: Does this happen to you guys a lot?

COBAIN: Yeah. Seeing bad organization on such a small level makes me realize why the world is so fucked up.

WOZQ: Do you think if you were playing at bigger venues people would be more organized?

WOZQ: You guys are known, actually, as being a “Sub Pop band.” What do you think of that?

COBAIN: Well, when someone walks up to me and says, “You’re my favorite Sub Pop band,” I think, “Jeez, we’re your favorite out of five bands? What about the rest of the country?” I don’t know. It just scares me. I wonder whether they like us because we’re a Sub Pop band or because we’re ourselves.

If you play guitar, you’re supposed to have fun.

WOZQ: What do you think of the other Sub Pop bands?

COBAIN: I love ’em. It’s not like I have to say, “Oh, our label’s great. We have good bands.” I really like the bands on the label. It isn’t because Jon and Bruce [who run Sub Pop] are marketing geniuses. It’s because they have good bands on their label. They do a good job of promotion.

WOZQ: I heard they based the whole label on the Motown idea—the regional thing, taking a lot of bands from the same region and marketing them all in one package deal.

COBAIN: It’s not as if they’ve packaged all these bands and told us to all go out there and play fuzz guitar…

WOZQ: Were you influenced by each other?

COBAIN: I don’t really think so, because most of the bands have been around. They didn’t all start up around the same time. I think every Seattle band is just influenced by punk rock. There’s always been a good, strong punk rock scene in Seattle. So it’s been around for a while.

WOZQ: So, how long have you guys been together as a band?

COBAIN: Mudhoney wasn’t actually the first to put out a record. They just became the most popular because they went on tour with Sonic Youth and they got a lot of exposure.

WOZQ: Were you one of [Sub Pop’s] first bands too?

COBAIN: Yeah. In fact, we were together before Mudhoney.

WOZQ: You guys were playing together before Sub Pop even started.

COBAIN: Around that time, when it was just starting up, when they put out the Soundgarden EP. I mean, we definitely didn’t have an impact on anyone in Seattle, because we were totally unknown. We’d had a few shows, but we weren’t really serious about it. We just decided to record a demo. We didn’t even know Sub Pop existed when we did our demo.

COBAIN: We don’t have any interest in a major label. It would be nice to have better distribution, but anything else that goes on major labels is just a bunch of shit.

WOZQ: Does Nirvana have another album coming out soon?

WOZQ: Is it already recorded?

COBAIN: We recorded seven songs with Butch Vig, a producer that does Killdozer and a lot of Amphetamine Reptile bands. He’s a great guy.

WOZQ: How do you think the album is going to sound?

COBAIN: Well, it doesn’t really sound different. We recorded seven songs. There’s five that are typically raunchy, heavy Nirvana with even more guitar, and there’s two that are manicdepressants. So it’s a little bit varied.

WOZQ: Any covers on the album?

COBAIN: We don’t know. We recorded a Velvet Underground song. The songs will be more poppy sounding.

WOZQ: Trying to get on the radio?

COBAIN: No. Not at all. That has nothing to do with it. I like pop music.

COBAIN: We made a mistake with “Love Buzz” [on the group’s last LP, Bleach] because it’s our best song as far as I’m concerned. There’s nothing worse than when a band does a cover that’s better than the original. Basically we took the rim—the bass line—and rewrote that song. We stripped it down.

WOZQ: I thought that song sounded a little bit different than the rest of the stuff on the album.

WOZQ: So, have you guys ever played out here in western Massachusetts before?

COBAIN: I don’t know. I’m here in this room. I didn’t get to walk around. You see, we don’t really get to see the sites. We mainly see the road.

COBAIN: I’ll tell you what cities I don’t like to play. No, really. The cities I like: San Francisco. Ann Arbor. That’s a really great place. People are enthusiastic. They’re organized.

WOZQ: Have you been drawing more crowds since the LP was released?

COBAIN: It depends on what city. In some places we’re popular. Some places no one has heard of us. It’s weird. We don’t have much promotion. I can probably count on my hand how many times we’ve had an interview.

Playing the same set every night is as boring as a construction job. You get tired of it.

WOZQ: Do you think it’s worth it just to play, even if you don’t have much of an audience? Do you still enjoy it?

COBAIN: Sure. I like playing just for the hell of it. But not for seven weeks. Playing the same set every night is as boring as a construction job. You get tired of it.

WOZQ: You don’t vary the set at all?

COBAIN: We don’t have enough songs. We dropped five songs [from Bleach] off the set the week after we recorded it. We’re not playing them anymore, because they’re boring. It’s just the same set. Fun, fun, fun. But in Europe we’re bigger than breakfast on an underground level.

WOZQ: That’s like when Dino[saur] Jr. went to Europe. They got an incredible turnout.

COBAIN: Dino Jr.’s big over there. They accept underground bands over there.

WOZQ: So, what was the deal with Jason Everman [Nirvana’s ex-guitarist, now in Soundgarden] last summer?

COBAIN: We kicked him out, ’cause he didn’t like to do the songs that we like. He wants to play slow, heavy grunge, and we want to write pop songs.

WOZQ: Are you getting a bit sick of hearing the grunge sound?

COBAIN: Yeah. There’s only so much distortion you can take. A lot of bands now are going in different directions and writing different styles of songs. Everyone’s experimenting. We don’t want to milk the sound as far as we possibly can. The Fluid recorded with Butch Vig in Madison, also. Tad recorded with Steve Albini in Chicago.

WOZQ: Has Nirvana gone through any other band member changes?

COBAIN: No. Just one, and Jason didn’t play on the record. He joined the band a week after we recorded it. But we put his name on the record anyway.

WOZQ: Is he from Seattle?

COBAIN: Yeah. He’s a really nice guy. We met him maybe a couple of months before we recorded the record, and really liked him, and started hanging out with him. I started thinking that maybe I’d like to do a bit more singing, and didn’t want to worry about guitar playing that much. It wasn’t a very good idea. We had to practice more.

WOZQ: There’s a lot of bands that are doing it with three people.

COBAIN: It’s kind of hard. [A fourth person] can help a lot, though. It would be easier to just stand there and sing.

WOZQ: Do you make a concerted effort to jump around on the stage?

COBAIN: Yeah. We choreograph it. There’s tape marked all over the floor.

WOZQ: You know, I thought you used to all have long hair. When I saw you guys the last time, I swear all of you had long hair.

COBAIN: Yeah. Hair grows, then you cut it. Kris just shaved his eyebrows and his body. All of us had to stop him.

WOZQ: When I saw him at first, I thought he was one of the security people.

COBAIN: A Nazi. Yeah, he’s really into Minor Threat. He just heard it for the first time yesterday. And he’s even questioning that.

Even if we wanted to be politically correct, we couldn’t because we’re too stupid.

WOZQ: We saw Fugazi two weeks ago. They played here—a benefit concert for a women’s shelter in Northampton. Are you guys into any politically activist movements?

COBAIN: We don’t agree with it at all.

WOZQ: How did you spend your Earth Day?

COBAIN: We collected as many plastic and polystyrene goods as we could find and built a big bonfire.

WOZQ: Do you recycle on tour?

COBAIN: Sure do. We throw everything right out the window. Actually, we recycle at home. I think there should be mandatory recycling laws.

WOZQ: But you said you’re not into political causes.

COBAIN: Oh, no. Not at all. I don’t think it should be related to music. Nobody wants to hear a preacher. If you play guitar, you’re supposed to have fun.

WOZQ: That was like at the Fugazi show. It was cool, but Ian MacKaye got up there and lectured to everyone.

COBAIN: I mean, it’s fine for some people. But even if we wanted to be politically correct, we couldn’t because we’re too stupid. We were just a bunch of stoners in high school. 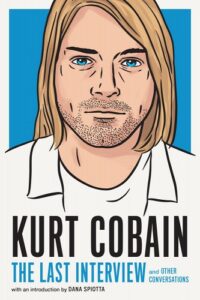 Excerpted from Kurt Cobain: The Last Interview: And Other Conversations. Copyright © 2022. Available from Melville House.

Kurt Cobain (February 20, 1967 – April 5, 1994) was an American singer, guitarist, and songwriter. With his band Nirvana he invented the hard-rock genre known as grunge and became an inspiration to a generation with his corrosive, poetic lyrics and blistering stage presence. He was inducted posthumously into the Rock and Roll Hall of Fame in 2014. 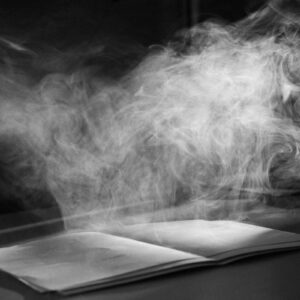