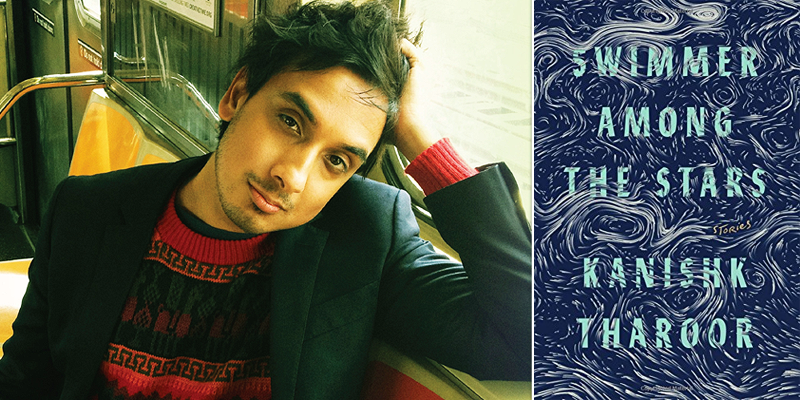 "The individual isn’t always my unit of choice"

For years I knew Kanishk Tharoor primarily as the author of thoughtful essays about history, in the broadest sense: not just what happened in the past but also how humans have explored the past, made sense of the past, contested the past. So when I started making my way through his debut book of fiction, the short story collection Swimmer Among the Stars, I was unsurprised to find myself jumping from century to century and continent to continent, watching people from different nations and cultures encounter each other, interact, and tell stories about those interactions.

In one story, residents of an an ancient city wait to be conquered by a foreign invader, referred to only as “the khan.” In another, ambassadors of a future United Nations hold their debates in a space station as environmental havoc engulfs the planet. Open to a random page and you might see Tharoor reworking a centuries-old legend, or generating his own, about the large and small ways peoples, empires, and cultures collide. But you’re just as likely to see him staging some decidedly more contemporary encounter: a conversation between the crews of icebreaking ships stranded in the Antarctic; a Skype call between a glossy magazine photographer and his unhappy subject in India.

The cumulative effect, for me, was “history” feeling less alien and distant and, at the same time, “the present” feeling more historical: more fundamentally enmeshed in the tectonic, long-term forces that we take center stage in our textbooks, but perhaps less often in contemporary short fiction (or American short fiction, anyway).

In the weeks leading up to his book’s publication, Tharoor and I spoke by phone and corresponded by email about storytelling, literary heritage, MFA workshops, and more. Our conversation has been condensed and edited for clarity:

Kanishk Tharoor: It was always there. As a kid, as a teenager, I would write short stories, sketch out novel ideas. As I got older, it was something I always tried to nurture alongside my nonfiction. And I didn’t see the two approaches as terribly mutually exclusive. My fiction is pretty interested in some of the issues—history, international encounters, cultural property—that my nonfiction tries to inhabit. But at a certain point I decided I would rather explore some of this material through the license and playfulness that fiction allows.

I write for the same reasons that I read: to learn, but also to experience wonder and estrangement.

Take, for example, the “Mirrors of Iskandar” section of the book. It’s my reimagining of the stories of the Alexander romance. I’ve always been interested in those stories: in the way they spread across the world over hundreds of years, through both textual and oral culture, making their way as far as Scotland and Malacca. Now, I could have written some kind of scholarly monograph tracing that process. But I felt there were things about this storytelling tradition—its nimbleness, its humor, its sense of wonder—that I could excavate through fiction in a way I couldn’t through nonfiction. I write for the same reasons that I read: to learn, but also to experience wonder and estrangement. To be taken out of myself. And fiction is more suited to that, for me, than rigorous factual investigation. Facts have their place, of course, but I enjoy history mostly for the types of imaginative possibility it gives us.

PCB: Tell me about your literary heritage—about the modes of literature and storytelling that you grew up with.

KT: I had this great privilege: my parents were readers and writers themselves. My father writes. My mother writes and is a professor of literature. I was spoiled by the reading and thinking about books that happened around me. I was spoiled by the number of books in the house, and the range. My mother would read to us from the Old Testament just as often as she would read to us from The Shahnameh, the Persian Book of Kings. Even as a small child I loved older texts, historical texts, and that’s something that has persisted. So it makes sense that my fiction is interested in slightly older ways of telling stories, pre-modern ways of telling stories. Folklore, historical epic.

We also read a lot in translation in my house. Much of the fiction I’ve read in my life has been in translation from non-English languages. And my fiction is definitely animated by writing from Southern Europe and South America. Those are lineages that my work aspires to as much as Indian literature or American literature.

PCB: If I remember correctly, you were born in India, but then moved–

KT: I was actually born in Singapore. My father was working for the UN High Commission for Refugees there. But I lived there for only three months, and spent a lot of my time in an incubator. My twin brother and I were woefully premature and so underweight that we were studied and written about in a Singaporean medical textbook as “The case of Stanford and Stanley.” Anyway, we survived, we moved to India, we moved to Geneva for five years, we had a year in Calcutta. From the age of six I was New York-based, as I am now.

PCB: And you got your MFA at NYU?

PCB: I don’t mean to paint all MFA workshops with the same broad brush, but I think it’s fair to say that there are types of storytelling and types of writing that MFA workshops and better designed and equipped to handle. Speaking from my own experience, I can easily imagine a lot of stories in your collection being greeted by the workshop mindset with a mix of apprehension and incomprehension, whether because they don’t foreground individual psychology or because they’re making heavy use of modes, like fable and parable, that aren’t really part of the American workshop’s DNA.

KT: Well, I really enjoyed the MFA. It’s such a luxury to have years of support to read and write at that early stage. It’s easy to jump on the MFA, but I had a good experience. I can’t complain. It made me a better—more rigorous, more attentive—writer. Which is what I needed at the time. I gained a lot from the insights and encouragements of my peers and teachers.

But I struggled at times with the premise of these programs, or the implicit premise, that all material is equal and it’s the craft the matters most. I saw so many discussions become very technical, with very little consideration of questions like Why write a certain story?, Why write about a certain experience?, What makes a subject valuable? I think there’s a hesitance to think about those issues in MFA world.

Of the stories in my the book, only one of them was written while I was at NYU. I workshopped other pieces and bits of a novel I’m still working on. And I had colleagues and peers who were dexterous readers who I trusted. But I also felt like I was taking some people out of their comfort zone. And seeing people’s frustration with being taken out of their comfort zone could be disappointing, partially because I don’t feel like I’m doing anything particularly radical or different.

Why write a certain story?, Why write about a certain experience?, What makes a subject valuable? I think there’s a hesitance to think about those issues in MFA world.

If you read contemporary fiction not from the West, these sorts of techniques and narrative frames—borrowing from parables, from epics—are not uncommon. To me they don’t feel like novel gestures. It’s just how it felt natural for me to write. I didn’t have a well-developed plan.

PCB: Your stories aren’t very psychological, at least in a certain contemporary sense of the world. You’re not really trying to get inside your character’s heads to make us understand their actions or decisions.

KT: I suppose the individual isn’t always my unit of choice. Which means the payoff isn’t always a sentimental or emotional moment located in a single person’s experience. I read to be taken into a world, so I write to take people into worlds. And you can be taken into a world without seeing that world through the lens of individual psychology. I’m fond of assemblages of characters, of groupings.

PCB: Sometimes, through these groupings, you evoke some of the tensions of history as an enterprise—the tensions of doing historical work, of studying the past. I’m thinking of the title story, which describes a meeting between a group of linguistic anthropologists and a woman they are studying because she is the last living speaker of her language. The way you evoke their project makes it seem simultaneously noble and doomed.

KT: Yes. The work anthropologists and linguists do to try to preserve languages is amazing. At the same time, I have a problem with the idea that any language is a fixed thing, with a fixed relationship to a fixed culture. Languages can’t be fixed. That doesn’t mean codifying language systems—or any other aspect of a people and their history—isn’t worthwhile. But there is a tension there.

PCB: In “Cultural Property” there’s the Indian-born archaeologist who, working on a British crew, finds himself resenting his colleagues’ notion of universalism: the objects they uncover are “for everybody,” but will be owned by a British museum.

KT: I wanted to write a story about the ideal of universalism. Who can be universal? In what contexts? I suppose that character is a kind of proxy for me. I’ve never been an archaeologist, but I am interested in the conflicts of this kind of work—conflicts over who gets to use the past for what. I’ve always loved encyclopedic museums like the Met and and the British Museum, while being troubled by the manner in which they compiled their troves. The universal project they represent—that experience of seeing human creations in a global context—shouldn’t be the preserve of the West.

PCB: The book has already been published in India. From what I can make out online, the reception has been fantastic. How do you think it might be read differently here in the West?

KT: I’m fascinated to see. I wonder if the very generous reaction in India might owe something to the fact that Indians who read in English are used to reading the literature of other places, used to being taken out of their native contexts, to dwelling in the unfamiliar. They’re used to not always “relating,” so to speak, with characters and situations they encounter.

I’m sure there are many American readers who don’t have a problem with unfamiliarity. My stories don’t really privilege readers from a particular country or tradition. I think American readers, like readers everywhere, will feel equally familiar with and, in a good way, estranged from the worlds of my fiction.

Peter C. Baker is a freelance writer in Chicago and a contributing editor at Pacific Standard magazine.

Read a (Love) Letter From Herman Melville to Nathaniel Hawthorne 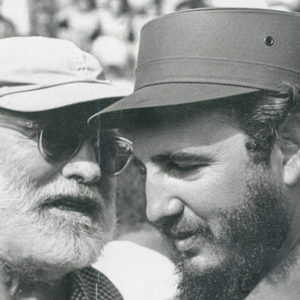 Fidel Castro’s recent death has stirred up old memories of the many ways he antagonized members of the American establishment,...
© LitHub
Back to top