Read a (Love) Letter From Herman Melville to Nathaniel Hawthorne

On the anniversary of the publication of The Scarlet Letter

167 years ago today, Ticknor, Reed & Fields published The Scarlet Letter, Nathaniel Hawthorne’s classic novel of repentance and slut-shaming. But actually, this isn’t about The Scarlet Letter—it’s about one of the most fascinating friendships in literature. Because whenever I think of Nathaniel Hawthorne, I can’t help but think of Herman Melville.

Hawthorne and Melville met in 1850, and though Hawthorne was fifteen years older, and the two very different (Melville bombastic and highly emotional, Hawthorne much more reserved) the two hit it off right away. Soon afterwards, Melville published a very complimentary review of Hawthorne’s Mosses from an Old Manse, and the writers began an intense friendship that would last about two years before unexpectedly dissolving. There has been much speculation about this friendship, of course, and whether it may have been something more. As Jordan Alexander Stein put in in LARB, “All we are left with are representations of Melville’s feelings, tantalizingly expressed without being particularly easy to pinpoint. Melville wrote of Hawthorne with undeniably sexy language. What proves more elusive are the feelings to which, with any precision, this language can be said to refer.”

For instance, in that aforementioned review, Melville writes: “[A]lready I feel that this Hawthorne has dropped germinous seeds into my soul. He expands and deepens down, the more I contemplate him; and further, and further, shoots his strong New England roots into the hot soil of my Southern soul.” Which sounds like, well, you know.

But one of the best examples of this is the wildly flirtatious, possibly scandalous (magnets indeed), letter below. After Hawthorne read Moby-Dick—which was dedicated to him—he sent Melville a letter. That letter has not survived (nor any of Hawthorne’s letters to Melville—which begs the question: why did Melville destroy these?, but anyway), but Melville’s response, written in November of 1851, suggests that his friend rather liked his novel. So is it a love letter? Even if they were never more than friends, I’d have to say yes. I mean, “Knowing you persuades me more than the Bible of our immortality,” and “I feel that the Godhead is broken up like the bread at the Supper, and that we are the pieces”? Damn. Romantic or not, that’s some passionate correspondence.

My Dear Hawthorne: People think that if a man has undergone any hardship, he should have a reward; but for my part, if I have done the hardest possible day’s work, and then come to sit down in a corner and eat my supper comfortably—why, then I don’t think I deserve any reward for my hard day’s work—for am I not now at peace? Is not my supper good? My peace and my supper are my reward, my dear Hawthorne. So your joy-giving and exultation-breeding letter is not my reward for my ditcher’s work with that book, but is the good goddess’s bonus over and above what was stipulated—for for not one man in five cycles, who is wise, will expect appreciative recognition from his fellows, or any one of them. Appreciation! Recognition! Is love appreciated? Why, ever since Adam, who has got to the meaning of this great allegory—the world? Then we pygmies must be content to have our paper allegories but ill comprehended. I say your appreciation is my glorious gratuity. In my proud, humble way,—a shepherd-king,—I was lord of a little vale in the solitary Crimea; but you have now given me the crown of India. But on trying it on my head, I found it fell down on my ears, notwithstanding their asinine length—for it’s only such ears that sustain such crowns.

Your letter was handed me last night on the road going to Mr. Morewood’s, and I read it there. Had I been at home, I would have sat down at once and answered it. In me divine maganimities are spontaneous and instantaneous—catch them while you can. The world goes round, and the other side comes up. So now I can’t write what I felt. But I felt pantheistic then—your heart beat in my ribs and mine in yours, and both in God’s. A sense of unspeakable security is in me this moment, on account of your having understood the book. I have written a wicked book, and feel spotless as the lamb. Ineffable socialities are in me. I would sit down and dine with you and all the gods in old Rome’s Pantheon. It is a strange feeling—no hopefulness is in it, no despair. Content—that is it; and irresponsibility; but without licentious inclination. I speak now of my profoundest sense of being, not of an incidental feeling.

Whence come you, Hawthorne? By what right do you drink from my flagon of life? And when I put it to my lips—lo, they are yours and not mine. I feel that the Godhead is broken up like the bread at the Supper, and that we are the pieces. Hence this infinite fraternity of feeling. Now, sympathizing with the paper, my angel turns over another page. you did not care a penny for the book. But, now and then as you read, you understood the pervading thought that impelled the book—and that you praised. Was it not so? You were archangel enough to despise the imperfect body, and embrace the soul. Once you hugged the ugly Socrates because you saw the flame in the mouth, and heard the rushing of the demon,—the familiar,—and recognized the sound; for you have heard it in your own solitudes.

My dear Hawthorne, the atmospheric skepticisms steal into me now, and make me doubtful of my sanity in writing you thus. But, believe me, I am not mad, most noble Festus! But truth is ever incoherent, and when the big hearts strike together, the concussion is a little stunning. Farewell. Don’t write a word about the book. That would be robbing me of my miserly delight. I am heartily sorry I ever wrote anything about you—it was paltry. Lord, when shall we be done growing? As long as we have anything more to do, we have done nothing. So,now, let us add Moby Dick to our blessing, and step from that. Leviathan is not the biggest fish;—I have heard if Krakens.

This is a long letter, but you are not at all bound to answer it. Possibly, if you do answer it, and direct it to Herman Melville, you will missend it—for the very fingers that now guide this pen are not precisely the same that just took it up and put it on this paper. Lord, when shall we be done changing? Ah! it’s a long stage, and no inn in sight, and night coming, and the body cold. But with you for a passenger, I am content and can be happy. I shall leave the world, I feel, with more satisfaction for having come to know you. Knowing you persuades me more than the Bible of our immortality.

What a pity, that, for your plain, bluff letter, you should get such gibberish! Mention me to Mrs. Hawthorne and to the children, and so, good-by to you, with my blessing.

P.S. I can’t stop yet. If the world was entirely made up of Magians, I’ll tell you what I should do. I should have a paper-mill established at one end of the house, and so have an endless riband of foolscap rolling in upon my desk; and upon that endless riband I should write a thousand—a million—billion thoughts, all under the form of a letter to you. The divine magnet is on you, and my magnet responds. Which is the biggest? A foolish question—they are One.

P.P.S. Don’t think that by writing me a letter, you shall always be bored with an immediate reply to it—and so keep both of us delving over a writing-desk eternally. No such thing! I sh’n’t always answer your letters, and you may do just as you please. 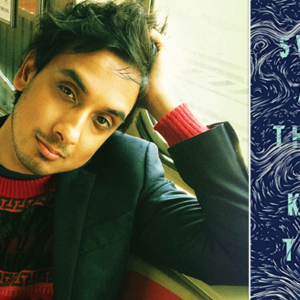 For years I knew Kanishk Tharoor primarily as the author of thoughtful essays about history, in the broadest sense: not just...
© LitHub
Back to top