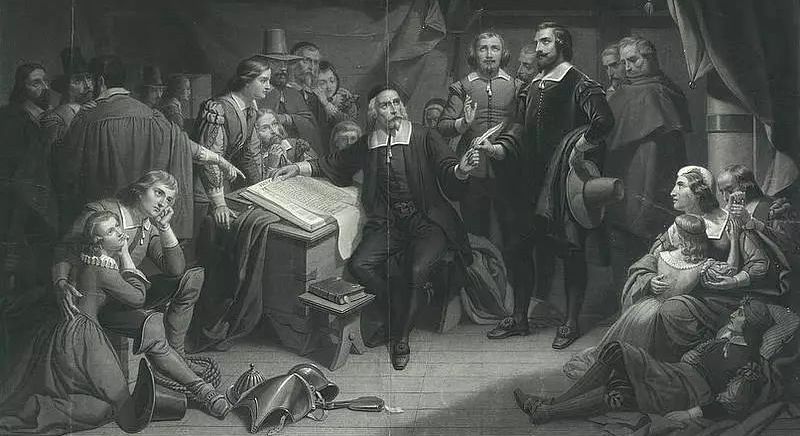 Perched high on the summit of the colony’s seaside drumlin, a severed head rose up from a stake. Next to it, the Meeting House struck an incongruously gothic chord compared to the colony’s simpler structures. Little sunlight entered past the salt-stung door into the dim interior. The atmosphere matched the occasion on the morning of September 4, 1638, when judgment day had come for Arthur Peach, Richard Stinnings, and Thomas Jackson.

Stifling heat hung over those crowding into the vast first floor. Intermittent narrow openings in the walls served as bellicose embrasures, allowing weapons to be fired if the Meeting House came under attack but providing little fresh air. The weak light left the observers straining to view the defendants as they entered.

As they took in the scene, Peach and his two companions were hemmed in by the curious, the angry, and those secretly sympathetic. The musty gloom cloaked the defendants’ gaunt features, shriveled by malnourishment since their escape from the colony. The suspenseful moment, shrouded by shadow, was as fraught with heightened drama as a Florentine chiaroscuro painting, darkness pitted against light.

Peach and his men were fighting not just for their lives but also for their souls. In the seventeenth century, life and death, good and evil, hovered over everything. Colonists strove to identify their own transgressions each day, duty bound to deny “deviltry” at every turn. That day in September, the people of Plymouth Colony needed to determine not just guilt or innocence, but whether Peach and his coconspirators should be consigned to eternal damnation. Dirty, sweating in the heat, scared, they certainly stank like something demonic, a red flag for those in attendance. Peach, standing before them to answer for murder, might actually have known the devil personally, as far as the bystanders were concerned. For the primary defendant, hell must have indeed felt within reach.

The men’s situation would have been pitiable if their deeds had not been so abhorrent. Peach stood trial in a foreign land, parted from family, as a member of the lowest social standing, discarded by whatever influential benefactors he once had. As if waking up on the throes of a well-deserved nightmare, Peach was surrounded by people he had wronged over the years: his companions, whom he had coaxed into trouble; the allies of the Nipmuc man he had murdered; Edward Winslow, whose contract he had flouted and trust he had violated by running away; Stephen Hopkins, whose servant he had impregnated in violation of Plymouth laws; and then there was Dorothy Temple herself, whom he had effectively abandoned. Peach kept his ear to the ground, and even with so many enemies he had reason to believe that the scales of justice could tip in his favor. Peach’s jury would seat no tribesmen, being made up of individuals who looked like him, white men. Men who had been in quarrels and wars with tribesmen, who had bought and otherwise finagled land from the indigenous people, sometimes only to find them still “trespassing.”

Some settlers made clear that they were unconcerned with the evidence of the crime. Jurors, too, might value fellow settlers, servants or not, over the life of a single tribesman. On this front, former Plymouth Colony governor Bradford noted that within the settlement “the rude and ignorant sort murmured [disapprovingly] that any English should be put to death for the Indean.” Such rumblings had to worry Plymouth Colony governor Thomas Prence for the jurors’ safety. Some years later, a colonial juror sitting on a case in which the defendants were tribesmen came under threat of intimidation from “a mob assembled at . . . [his] home.” Fearing for their lives, even open-minded jurors might be unable to arrive at a consensus.

Narragansett and Wampanoag, adorned in traditional clothing, clustered near the banished and controversial colonial leader, Roger Williams, who was in attendance, likely sweating in his trim-fitting waistcoat. There were men present, like those who had urged his banishment from Massachusetts Bay, who would have liked to see Williams dead. One settler who nursed a feud with him called him “an ass, a simple dunce, a knave, a liar, a thief, cheater an hypocrite, a drunkard, a traitor, a whore monger with Indian women.” Relations were tense at best among many of the colonial leaders and citizens gathered together in close quarters for the trial.

In parts of Kent, England, the birthplace of several of the jurors, the townspeople were called to court by the sound of the enormous, ancient moot horn. The low, sonorous tone could be heard far and wide. In the English village of Sandwich, men seated for jury service gathered in an imposing courtroom where Queen Elizabeth I had once been entertained. Its walls boasted oak panels, adorned with royal arms. The Plymouth Colony Meeting House was humble by comparison but far more solemn.

English town criers traditionally called jurors and spectators to court with the rousing refrain “Attend, good men and true,” a summons that may have also drawn the Plymouth Colony jurors to court. Edward Foster, William Hatch, John Winslow, William Pontus, Richard Derbye, John Holmes, John Paybody, Humfrey Turner, Samuell Hinkley, Giles Rickett, and Gabriell Fallowell made up eleven of the twelve men needed to serve as jurors. Clues in the historical record suggest that Prence and Reverend Lothrop managed to agree that if the religious leader kept his congregation in the colony until the end of the trial, the governor would support their relocation.

The jurors were an austere group. No sketches, visual or verbal, survive to reveal how the jurors looked or acted as they convened, but their biographies help fill in the blanks. Though all married or widowed, none wore wedding rings, an affectation disdained by Puritans. Their work-worn hands would have rested unadorned on their roughly hewn garments. Juror Pontus may have showed his fifty-three years of age, the skin around his eyes creased. The hardworking farmer likely appreciated getting away from the fields and off his feet, as jurors were among the few in court to enjoy the luxury of sitting on benches. Jurors Hinkley and Hatch would have greeted each other with great familiarity. They were not just neighbors in the settlement of Scituate but also had traveled to the New World on the same ship, Hercules. Juror Hatch had special reason to hold his head high; he had recently been put in charge of “exercising the people in arms at Scituate” to prepare for any future battles. Now Hatch had to brace himself to consider evidence against a veteran soldier.

Arriving among the jurors and the mass of observers, Governor Prence and his court assistants, three abreast, cloaked and armed, entered the imposing building—by law, men with the right to carry weapons brought them to all public meetings. Myles Standish, Plymouth Colony authority and overseer of the courtroom, kept his sidearm at the ready as he escorted Prence, likely also hanging his knife around his neck, the battle-tested blade in condition “as sharp as a needle, and ground . . . to an edge.” The colony’s military captain remained alert to danger. Prence could count on Standish being at his side, whatever happened in the courtroom.

It was Standish who had taken it upon himself to place the severed head of a battle foe off the Meeting House’s upper level. The skull was rotted, and its eye sockets were empty. The remains belonged to the defeated tribesman Wituwamat. Standish added a makeshift flag “of linen cloth dyed in the same Indian’s blood.” The military leader offered a clear warning to all who entered. The English perfected this technique of creating atmospheric horror to intimidate those approaching government edifices. In defeated Ireland, the English lined one walkway so that supplicants “passe[d] through a lane of heddes . . . [provoking] greate terror . . . [by witnessing] dedde fathers, brothers.” To colonists, the grisly adornments appeared as appropriate reminders of the dangers that threatened, and to Indians, the skull and blood-soaked linen meant that sometimes settlers sanctioned and glorified the killing of a tribesman.

Those who could not fit inside the Meeting House likely waited close by, hoping to overhear testimony that would directly affect the villagers. Each man, woman, and child had endured a state of constant fear as the trial approached. They stood and strained their ears against the swells of summer wind passing through tasseled corn crops, switch grass, and oak trees, a louder refrain than the quiet harbor waters at the bottom of the hill.

The Pequot, still reeling from the recent slaughter of so many of their people at the hands of the colonists, continued to warn other tribes that “the English would fall upon them,” too. Former governor Bradford noted in his journal that he suspected that some indigenous people might prepare for battle, “conceiving they should now find the Pequot’s words trew.” Settlers feared that the threat might provoke indiscriminate retribution from surrounding tribes. As worried as Prence was for the future of Plymouth Colony and for those who lived in the immediate village, he knew that Penowanyanquis’s murder placed the frontier settlers in even greater immediate jeopardy. Those Englishmen and -women on the far outskirts of the colony fully realized their “remoteness and vulnerability.” Colonists secured their small homes as carefully as they could at night, keeping their children inside. During the day, the murder was the talk of the colony. Roger Williams simply and accurately noted that among the colonists there was a great “hubbub.”

The “very austere” Miantonomo, the Narragansett sachem who had detained Peach and his men in the woods near Providence, shared an ominous warning with the English. “Be careful on the highways,” he cautioned; “the natives, friends of the slain, had consultation to kill an Englishman in revenge.” The sachem promised his people that the colonists “would see justice done,” which helped ease tensions and stifled calls for retributory violence. The English hoped that his assurances would prevent the urge for vengeance. They needed to manifest justice to prevent the Narragansett from rising up against the Plymouth settlers. Plymouth colonists must have wondered whether the jurors would indeed be able to condemn Peach and his men to death if the evidence warranted it. Former governor Bradford suspected that “the rude and ignorant sorte” would not. 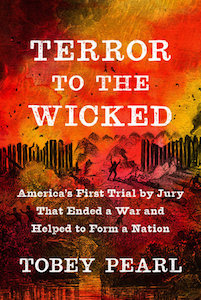 From TERROR TO THE WICKED: America’s First Trial by Jury That Ended a War and Helped to Form a Nation by Tobey Pearl. Reprinted by permission of Pantheon Books, an imprint of the Knopf Doubleday Publishing Group, a division of Penguin Random House LLC. Copyright © 2021 by Tobey Pearl.

Tobey Pearl earned degrees in law and international relations from Boston University and studied international law at the University of Hong Kong. She practiced law and taught at Emerson College. She lives in South Florida and New England. Terror to the Wicked is her first book.

How The End of Vandalism Treats Small-Town America 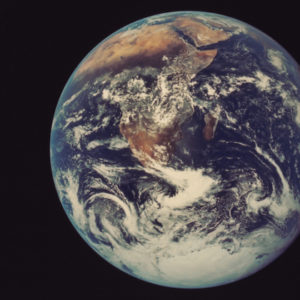 “One species does change into another.” Charles Darwin scribbled this phrase into a notebook in 1837 after his five-year...
© LitHub
Back to top
Loading Comments...