I first met Joseph O’Neill 17 years ago in the Chelsea Hotel, where he was living with his then-wife, a Vogue editor, and his young son. The Irish ex-lawyer had just published a family memoir called Blood-Dark Track, about his grandfather’s involvement in an IRA political assassination in 1930s Ireland.

“How did we wind up at the Chelsea Hotel?” mused O’Neill then. “We had no credit history coming from Europe, and the Chelsea would take us.” The Chelsea was famous for its mix of grit and artistry, where Sid Vicious of the Sex Pistols stabbed his girlfriend Nancy to death in 1978, and where Dylan Thomas went into his alcohol-induced fatal coma in 1953.

As I was leaving, O’Neill told me he was working on a novel about immigrant cricket players in Staten Island, stemming from his own years playing the game. I thought, “Um, that will be a hard sell.”

Seven years later, O’Neill’s novel Netherland, about multi-ethnic working-class cricket players set against the backdrop of post-9/11 New York and the Dutch narrator’s imploding marriage, broke out and became a literary bestseller. Championed by the legendary Knopf editor-in-chief Sonny Mehta and praised in the New York Times by Michiko Kakutani, it won the Pen/Faulkner Prize. The Dutch-raised Irishman O’Neill had written the Great American Cricket Novel.

In the novel, the broken-hearted petroleum analyst Hans is embraced by the eccentrics of the Chelsea Hotel, the crazy old women living fist-to-mouth in rent-controlled apartments, a gay man who always wears angel wings, and the occasional junkie artist. The Chelsea becomes a kind of character in the novel.

I met Joe O’Neill again last month in a sun-drenched coffee shop in the South Street Seaport, that is situated in a 19th-century brick building. O’Neill has recently published Good Trouble, his first story collection. Unlike his four novels, which each feature European protagonists, the new stories are all American.

“My novels deal with globalization and how modernity affects things,” said the 54-year-old O’Neill. “These stories are American stories written about Americans. The reason I was able to write American stories and maybe not American novels is that I can quickly populate my stories with Americans and not fill out all the details. If I were to set a story in Ireland or England, there is something about the smallness of the place and the automatic transparency that inhibits me.”

“The American standard biography is more mysterious, more opaque and susceptible to investigation,” said O’Neill. “My sweet spot in these stories is created by the slight foreignness in everybody here.”

O’Neill’s witty, often darkly satirical stories cover a couple dealing with infertility, a father hellbent on revenge on an armed robber, and a mother dealing with angry, aggressive adult children. In one story, a poet is pressured to sign a support petition for Edward Snowden in verse. His narrators are set solidly in middle age or older.

O’Neill’s stories are influenced by his views on American maturity after moving to New York from London in 1998. “I think there is an arrested development in New York in terms of devoting yourself to the project of marriage,“ he said. “When I came here in my thirties, I was married and had a job with a suit. Even in my own cohort in London, people marry earlier.”

“I do believe in the political necessity of art,” he said. “Not that it changes opinions, but it promotes intellectual honesty and excellence.”

“When I came to New York, I saw there was a theme in the culture of men in particular trying to come to terms with what it means to be an adult, a crisis of maturity. It was a consumeristic, materialistic view of American society. This quest for maturity seems to be an American preoccupation.”

O’Neill had written his first two novels in his twenties. “When I was a younger writer, I really didn’t know what was at stake,” he said. “Maybe it’s not a coincidence that when I hit my forties, I started writing short stories. This life and the life of the people you know begin to resemble the life of literature, with marriage and children, unhappiness, frustration with money and injustice. It was only then, when I started writing these short stories that I was able to inhabit characters.”

It turns out that O’Neill is a master of literary eavesdropping. “I do like eavesdropping, “ said O’Neill. “There were two diners I would go to. One was The Riss on Eighth Avenue, where I met those guys, which is now closed. The other diner was The Malibu on 23rd Street. These two blind women came in. One of them said the line, ‘I’m too fat. I don’t have any blood.’ I was taking notes on my laptop. The keys were loud. Finally, one of the women said, ‘Is someone typing out what we are saying?’ Every time they’d talk, I’d type.”

In the story, “The World of Cheese,” a late-middle-aged woman named Breda is abandoned by her husband and tormented by her angry adult children. She comes east from California for a visit after her son berates her not being sympathetic to his son being circumcised. He forces her into guilt-inducing family therapy. Breda is marginalized by her own family.

“It is an old literary preoccupation, writing from the muted perspective of the woman,” said O’Neill. “What happens when everyone decides that you are the most boring person in the family? You are stuck with a daughter who gives you grief and a son who is very aggressive.”

“The woman in the story doesn’t have the ability to participate in a culture that has become frenetic and vocal, that rewards people for bad behavior,” he said. “She doesn’t have that assertiveness. Across the political spectrum, the more aggressive you are, the more rewarded you are. The political culture is very much about domination and fighting back. She has this idea that you are supposed to live your life quietly and decently. It blows up in her face.”

O’Neill raised three wild sons at the Chelsea, with the boys trying out their bikes and skateboards in the long hallways. He left the Chelsea in 2010 as his marriage ended. The bohemian oasis has been under prolonged assault by new owners, who have forced out long-term renters, destroying the offbeat community.

“When the owner Stanley Bard was ousted from the board, the hotel ceased to be the Chelsea,” said O’Neill. Bard had protected the artists and eccentrics for decades before he was forced out in 2007. “It just became another one of those real estate stories that are so typical in New York.  People hang on to their apartments. They try to litigate their way into housing security. There are not many people left from the old days.”

O’Neill wound up going to another formerly gritty Manhattan neighborhood, moving to the way west side of the Garment District, not far from the Lincoln Tunnel. “In the Garment District, people can catch a whiff of the old New York,” said O’Neill. “It can be a strong, pungent odor. It’s a wonderful neighborhood. We are near Port Authority and Times Square. We have food carts parked in the ground floor of our building and a sandwich factory next door. As I’ve gotten to know my neighborhood better, I find it is full of dance studios, film places and working artists. There is no posing going on, but a lot of art being made.”

“My building is full of refugees,” said O’Neill. ”Everyone on my floor is a refugee or the child of a refugee, from Iran, Germany and Cuba.” He lives there with his partner, the novelist, journalist and New Yorker contributor Rivka Galchen, and their young daughter.

O’Neill’s new neighborhood has already infiltrated his writing. In the story, ”The Sinking of the Houston,” a father of three boys is furious to find out that his 15-year-old middle son has been robbed at gunpoint on the subway. The foolish thief keeps the boy’s phone and the angry father is able to track the phone with an app and watches as the thief travels to Penn Station to set up more robberies. When the thief goes to Port Authority, the father grabs a bat and heads out to break the man’s legs.

As the man leaves the building, he encounters an elderly resident who walks with him. The man is Cuban, and tells a story of when he was an untrained 16-year-old recruit in the anti-Castro invasion at the Bay of Pigs in 1961, barely surviving the bombing and sinking of his ship.

“The story is about violence, political violence,” said O’Neill. “The father has his own fantasies of violence. He’s tracking the robber. Is he going to beat the man up, then get arrested?”

“I like stories that swerve off in an unexpected direction in ways that the reader is not prepared for,” said O’Neill. “John Cheever did this in later more risky stories, that were almost magical.”

The great success of Netherland in 2008 remade O’Neill’s career. “Netherland saved me,” he said. “It gave me readers for the first time. They won’t let you keep publishing if you don’t sell books.” Netherland raised his literary profile. His next novel, The Dog, was nominated for the Booker Prize in 2014.

Our interview took place during the same week when the American media outlets revealed the horrifying news that the Trump Administration has ramped up an aggressive policy of ripping hundreds of immigrant children from their parents at the U.S.-Mexico border, with many of these children being under the age of five. This was hours before O’Neill had to pick up his own daughter from daycare.

“It’s inhuman to a degree that boggles the mind,” said O’Neill. “It’s a catastrophic snapshot of where this country is. We are in an absolute state of emergency.”

“One of the blackly comical damages through this whole Trump thing is that to add insult to the many injuries, the situation reduces rich, complicated inner lives to gibbering formatted pronouncements,” he said. “It is almost like Trump lays waste to the whole project of human sensitivity and knowledge. You can ask anybody, no matter how smart or stupid, and they have the same thoughts—‘he’s evil, he’s good or he’s terrible.’ This enlightened quest for knowledge and analysis has been reduced to rubble.”

For O’Neill, art and literature have become more important than ever. “I do believe in the political necessity of art,” he said. “Not that it changes opinions, but it promotes intellectual honesty and excellence.”

In “The Moustache in 2010,” a farce about yuppie life and facial hair, O’Neill reveals a dark subtext of anxiety. “It is one of my favorite stories in the collection,” he said. “It’s an attempt to historicize the present moment, so this young woman narrator can have insights to the terrible present.”

“Some people may find the ending opaque, but it is basically that we are in dark times. The narrator feels it, that things are not going to get better,” he said.

“I feel the same way, but I am not having any feelings that millions of others aren’t having,” said O’Neill. “It’s not just related to the Trump phenomenon. It’s related to the American democracy.” 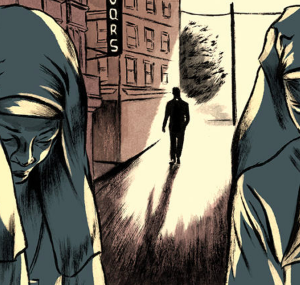