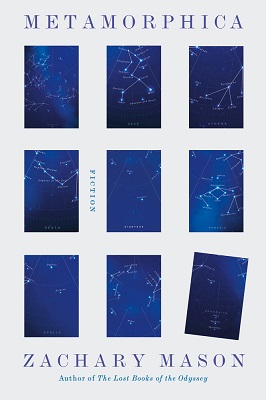 The following is from Zachary Mason's novel, Metamorphica. The novel transforms Ovid's Metamorphoses, reimagining and stringing together the tales of Narcissus, Pygmalion and Galatea, Midas and Atalanta, and even Ovid. Zachary Mason is a computer scientist and the author of The Lost Books of the Odyssey and Void Star. He lives in California.

Ovid was a Roman poet. An early success, he despised his own work. He sought out Aphrodite, Rome’s tutelary goddess, in the hope of striking a bargain. He ended up exiled to the shore of the Black Sea.

Ovid walks at twilight through dry rolling hills. A woman is before him, trailing her hands through the tall grasses which smoke wherever her languid touch falls, blackening and writhing and turning to ash. Fire roars and pops behind them, ruddy serpents of flame seething over the hills, but she’s singing a tuneless song and seems not to notice.

He’s about to speak when she says, “Not literature for you, but the literary life, because you’re lazy, and love company, and what you’d most like is to be famous without writing a word. Your work will be forgotten when you die, or a little before, though the memory of your persona will last a little longer.”

“It would take exile,” she says, still not looking back. “You’d have to give up everything. You would be transformed.” He feels her waver for a moment, but then she says, “You wouldn’t be willing.”

But she’s lost interest, is already far ahead and getting farther, and his chance is gone, but he rallies against the inexorable momentum of events, chases after her and seizes her arm.

She turns on him like a serpent and he staggers back as the hand that touched her burns like dry wood, the fire pulsing up his arm, the black bones showing through his incandescing flesh . . .

The sculptor Pygmalion carved a woman named Galatea out of marble and fell in love with her. Aphrodite brought the statue to life.

The island’s high wild hills were strewn with worn marble boulders, one of which glowed for him with more than ordinary light. Running his hands over the worn, lichen-stained surface, he could feel her within, her form latent, waiting to reveal itself. The smooth marble was like skin, or what skin ought to be.

His slaves rolled the boulder into his workshop as he laid out his chisels, then left him, as he needed to be alone for his great work. He uncovered her eye first, and wished he hadn’t, as it was difficult to work with her watching. He didn’t know what her face would be as he cut away the marble but when he saw it knew it couldn’t have been another. Day and night passed unnoticed; if he closed his eyes he could feel a pulse in the marble’s veins, a hint of warm breath on his hand as he caressed her cheek. With only her feet still entombed, he felt a building excitement, as though he were on the verge of some great thing, a final revelation in stone.

“Running his hands over the worn, lichen-stained surface, he could feel her within, her form latent, waiting to reveal itself. The smooth marble was like skin, or what skin ought to be.”

He fell asleep on an afternoon of thunderstorms and intolerable pressure in the air and dreamed that Aphrodite appeared to him among foam and flame and torn flowers and as she turned away she said, Desire is always imminent. He woke then, and his sculpture was gone, just flakes of the stone on the floor and wet footprints leading out into the garden, and though he cursed and wept, scarred the floor with scattered tools, in his heart he was relieved, for he now saw she was flawed, had been from the beginning, and in the high wild hills there were other prisms of marble scattered among the ridges and valleys and in one was what he wanted.

Polyphemus the Cyclops was Poseidon’s son. He abandoned the courts of Olympus. Odysseus later blinded him.

I found an empty island. I’d been wandering for years, after the war, letting ocean wash the blood away.

I made a garden of the island. I excavated pools in the shade, carved the ridges to make the wind sing, planted orchards in the valleys and shaped every branch. My tread wore roads in the hills over the centuries. Who I’d been slipped slowly away, and I felt I was becoming the spirit of the place, subsumed in its life and geology.

Sea-nymphs came in on the waves, and men, born on the wind in white-sailed ships. They marveled at being the first to find this paradise. They settled the lowlands, and I let them, though they cut down trees and scarred the earth with their ploughs and their laughter and woodsmoke drifted up to my eyrie. I could have shattered their towers and houses and driven them into the sea, but I’d had my fill of death and killing, and nymphs and men are short-lived, as are cities, so I waited.

During the days I kept to the heights, arranging the stones and resculpting the mountains, but in the evenings a restlessness sent me walking in the lowlands to watch the fires kindling in the farmstead windows. One day at dusk I saw a shadow picking its way over the hills. It stopped, hesitated, then approached me, and I saw it was a woman. Men rarely saw me even when they walked right by so I didn’t move, and was amazed when she looked up into my face and said, “They say there’s a giant who haunts the hills, but I never believed it.”

I said nothing, but she reached out and touched my hand. I hadn’t spoken in years, but I found my voice and said, “Go home.”

I could have left and let her wonder if she’d dreamed me, but the night was settling, and the lights were glowing in the houses, and the dark closing in, and I found myself starting to talk. I told her how I’d shaped the island and its beauty. I told her of my long journey through the seas, of the war that came before it, of the cataclysms, the shattering violence, the fallen giants mistaken for mountains, of my family and their enemies and their overweening pride. I went on for hours, and only when the moon was rising did she put her hand on my knee and say her name was Galatea, and she’d see me again. I sat there alone, remembering her hand’s pressure.

I waited for her every night. I talked as though ridding myself of all the words accumulated over the years. She spoke rarely, but I thought she saw in me a way to escape the limits of her life.

“I could have shattered their towers and houses and driven them into the sea, but I’d had my fill of death and killing, and nymphs and men are short-lived, as are cities, so I waited.”

I knew not to look in still water or mirrors, but found a pool and stared at my face. Deep wit, indomitable strength, the scion of a great house—in the balance they’re as nothing beside ugliness. Happy are the young, the careless, the lovely.

One night when it was late she put her head on my lap, which I tried to ignore. I spoke at random, then kissed her. Fragrant hair, pliant mouth, the sudden knowledge of the taste of her. She tried to pull away but I held her close. She thrashed like a fish, her tunic tore and then I was left holding a piece of cloth as she ran down the hill into the dark. “Galatea!” I bellowed, and in the valley below the farmers’ dogs started barking.

She didn’t come back the next evening or the next. I tried to tend to my forests and my mountains but my mind would wander. All this over such a small matter, I thought. She’ll be old in decades, dust in a century. Go through the motions of work, I told myself, and soon you’ll be working in earnest.

I walked the ridgelines when the sun rose, scanning the fields and the beaches. Every day I walked the same route, and every day I didn’t see her. Where my

sight-lines were occluded I tore out trees and knocked down escarpments so all the island was visible but still I saw nothing.

One day in the hills I found Tiresias the seer, blindly watching the flight of passing gulls. When I approached he cried, “Nobody* will be your undoing!”

He said, “Nobody will mock your agony!”

“In fact, Galatea hasn’t been kind.”

“Galatea?” he said. “Today is the day you forget her.”

I said, “Wine speaks louder than the god today.”

He said, “It will happen in the cove with the rip, which you passed an hour ago, so they don’t expect you to return,” and then he walked away mumbling to himself, following the wheeling flocks of birds.

I went back to the cove, and the seer was right; there was Galatea, entwined with her lover in the sunlight on the hot sand. They were utterly absorbed in each other. I should’ve slipped away and vanished but my pride, which I’d thought I’d mastered, rose up and I thundered her name.

Her lover sprang to his feet. He was brave, poor fool, fumbling in his clothes for his sword, but I crossed the beach in two strides and swatted him into the cliff where his head left a corona of bright crimson on the sandstone.

She knelt by his body, her voice ragged as she called his name—Acis—though his skull was shattered into fragments like a mosaic. Then she was upon me, battering my abdomen with her little fists; I disgusted her and always had—I was loathsome, unlovable, contemptible and weak, and the rest was lost in sobbing. It was the first time I’d seen her naked. She wasn’t the flawless eidolon I’d imagined, with her quaking flesh, tangled hair, running nose and misery. My gaze settled on Acis, who looked surprised. I closed my eye but still saw his blood glistening on the pale rock. “Listen to me,” she said.

I fled. I went up to the ridgeline but she pursued me, picking her way up the slope, so I put more hills between us. I came to a beach and still I heard her calling me so I walked into the water, breasting through the waves. The seas are shallow there, and though I’d thought I’d stay forever I left my island behind.

I waded through the ocean for days. I had dolphins for company, and distant ships, and storm-clouds, and, always, Acis’ face.

Eventually I found another island, remote and barren, less lovely than the first and not good for much but goats and solitude. I carved Acis’ image into granite cliffs over the beach and made a shrine to him.

The island’s people started coming to the shrine, offering jam and the first fruits of summer in hopes of a good harvest, many children, success in raiding. I go to the shrine at night to see how his image has weathered and to pray that his ghost will forgive me and his memory fade.

*Nobody was Odysseus’ nom de guerre.

From Metamorphica. Used with permission of Farrar, Straus, and Giroux. Copyright © 2018 by Zachary Mason.

A History of Violence, From Frontier to Family 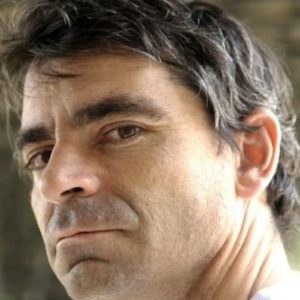 Joseph O'Neill's Good Trouble for Dark Times I first met Joseph O’Neill 17 years ago in the Chelsea Hotel, where he was living with his then-wife, a Vogue editor, and his young...
© LitHub
Back to top