Last night, Jeff VanderMeer treated fans and readers to a great AMA over at Reddit, during which he answered questions about his Southern Reach trilogy (the first of which, Annihilation, is soon to be a film), the writing process, climate change, genre, and publishing, as well as a lot of questions about which books he’s reading, which books he’s loved, and which books have shaped him as a writer. Not that I’m complaining—this is always what I want to know about my favorite writers too, and VanderMeer was very generous with his answers, on this and all other subjects. Highlights from VanderMeer’s AMA are below, and in addition, VanderMeer shared excerpts from not one but two unpublished novellas, so head over to Reddit for a sneak peek into the mind of a genre-bending master.

On the good books he’s read recently: [Ed note: he was asked a variant of this question several times]

I really loved M. Suddain’s Hunters & Collectors. But also The Portable Veblen by Elizabeth McKenzie and I just re-read Leonora Carrington’s collected fiction from Dorothy, out in April—really great short tales!! A classic.

Stepan Chapman’s The Troika is vastly underrated. A novel from Coffee House Press, The Gift [by Barbara Browning], out in May I think is worth your attention and I’m not sure it’s on anyone’s radar yet, alas.

Angela Carter, Vladimir Nabokov, and Edward Whittemore are right up there [on the list of most inspiring writers], along with Rikki Ducornet. Adichie’s Americanah is one of my recent favorites. Gosh, there are so many. I love John Le Carré. Colson Whitehead’s Zone One is stunning, as are many of his works. The Sellout by Beatty is just so freakin’ good. But there so many.

Stepan Chapman’s The Troika is the single text that is most responsible for making me fearless and has taught me most of what I know about attempting the impossible. It subverts, joyfully, every rule of writing you’ve ever been taught and changes your brain forever.

Right now I’m re-reading Sjón’s The Blue Fox. Sjón’s a writer I enjoy quite a bit.

On the writers who have influenced him most:

On the film version of Annihilation:

Alex Garland was kind enough to keep me in the loop. But I didn’t have anything to do with the movie. I did visit the set, though, and I was just blown away by everyone’s kindness. I’ll never forget Gina Rodriguez and Tess Thompson coming up and giving me a big hug and not just talking about Annihilation but about the other two in the series. Also, afterwards, I got in the mail a special surprise: an Annihilation movie pack, with a copy of Annihilation signed by the cast. But, yeah, it is weird. There’s a lot of interiority in the novels, so you know the movies have to be different.

On how to read the Southern Reach trilogy:

Watch out for velvet ants. Something weird’s happening whenever they’re around. Don’t read the Voice out loud or you’ll wind up in a storage closet not knowing what happened. Also, don’t map out the Southern Reach building from the descriptions or look at the carpet too hard or you’ll be even more disturbed.

On the symbolism of the lighthouse in Annihilation:

I’m thankful that most people have not applied a Freudian symbolism to that, which is something I worked against since I hate Freud and think those comparisons are way too easy.

The lighthouse is a real lighthouse in St. Marks Wildlife Refuge, but in terms of thinking about it consciously after, I liked the idea of a place that is a symbol of safety and order being subverted to be the opposite of that, really. And I just went from there.

One of the best novels about climate change I’m reviewing for a place in April so I can’t talk about it, alas. I did think Atwood’s trilogy was one of the best. There are so many that don’t really do it well, that I think that’s one reason Atwood’s still stands out. But I’m not always sure novels are the best delivery system for that. Also: how can we not know this by now? How can we deny what’s manifesting in front of our eyes? I was writing about it in my fiction in the 1980s. How did we get to this point now that we should have gotten to back then?

On how to get inside a character:

On whether literary fiction or genre is the best way towards making an income as a writer:

I tend to straddle the line there and so I’m not sure. I knew early on I had to get readers from both sides of that boundary to be successful, so I publish in mainstream/lit and genre places. Advice on this isn’t one-size-fits-all so I only ever give out advice on it when I know the specifics. I would say that it’s important not to sell yourself short. One sure way not to get into the New Yorker is to never submit to the New Yorker.

On working with FSG and straddling generic communities:

FSG has been a dream. From the beginning, I just clicked with them. They’re so smart and so imaginative and they care so much about books and think really hard about what works for each title they publish. And I think that the fact they positioned the Southern Reach [trilogy] for a general audience and put bright, atypical covers on them helped a lot, along with the unusual publishing schedule.

For my previous trilogy, it was not set in the real world and had three different publishers. Two of the three did well, and those publishers and editors were great to work with. But sometimes all the stars are just in alignment. I’m just really happy to keep a foot in both communities. Sometimes I think I need two more feet and to become a quadruped so I can join some other communities, too.

On how to approach nature writing with students:

Find the personal, even if they come from a city and don’t have much experience. You can always find something they have a personal connection to. It really is a fact that activism is local, and never more so than with the environment. And finding the intersection of eco issues and social justice issues is good.

On how you know when you’ve got it “right”:

It varies for every piece of fiction, for me. I tend to write in different styles and with different structures because I believe there’s an ideal way for every character point of view. So often I figure it out through the texture and tone of the first few pages. I’ll get the voice right there through several drafts and once I’m living in that voice I’ll write the rest of a full rough draft. But it’s tough. And sometimes you just have to choose one approach and go with it and if you mess it up, you mess it up and start over. But usually you’ve learned something in the process. I’m not so much about efficiency in fiction. That’s for business process not creative process.

On how science fiction is changing:

We’re still not even at the peak of translated fiction from the past changing our perception of the field. To take just one example—there are dozens of Latin American SF and fantasy writers yet to be translated into English that would make an impact on our perception of the canon, from the 20th century. So I feel like reports are still coming in, and we still don’t know, in the English-speaking world, the full outline of what SF is, what fantasy is. So I still see that as a very vital thing.

And then some of our best short story writers in the field in the US and UK and Australia are just on the cusp now of having collections or first novels and I find that very exciting, because I think that’ll break things wide open too.

On that Milo Yiannopoulos book:

I can’t say I was unhappy S&S pulled the plug on [Milo Yiannopoulos]. I was ambivalent about a boycott because many of their other imprints publish great stuff. And Roxane Gay I thought made a great statement by pulling hers, while making the point that she was in a position where she could afford to do so and she didn’t expect all the other authors to do the same. So I guess as with all things, for me, it depends on the specifics of the situations and there are always nuances and complexities. Or, there usually are. But my visceral reaction to the news [Yiannopoulos] had been pulled was a general sense of satisfaction.

On advice for beginning writers:

The number one bit of advice is to write for yourself, write what gives you joy and/or is personal to you or interests you, ignites your curiosity. Don’t write to trends and let the marketplace come to you. You’ll be much, much happier.

LISTEN: Paul Holdengräber talks to the poet Sjón about the importance of travel, keeping your audience awake, classical Nordic literature, the Future Library, and articulating the world. 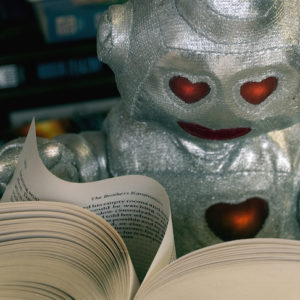 "I don’t do Twitter," the poet Anne Carson replied baldly to my request for a comment. No great surprise there, I guess:...
© LitHub
Back to top