A Novelty, A Surprise, and A Balm for News-Induced Anxiety

“I don’t do Twitter,” the poet Anne Carson replied baldly to my request for a comment. No great surprise there, I guess: many people feel compelled to avoid the site and its multitude of abrupt publications. It’s a timesuck, and a cacophony, with few genuine bon mots amid a relentless volley of reaction gifs. And it appears Twitter may not be around forever. Now in its tenth year, the company reported on February 9th that it had missed its targets for the fourth quarter of 2016, and shares in the company fell 10 percent in response.

I had emailed Carson to ask about a Twitter account with over 6,000 followers that is tweeting her translation of Sappho’s fragments, published as If Not, Winter. It is one of several successful bots—some true robotic accounts, and some that are accounts run by humans—publishing works of literature 140 characters at a time.

Linguist and programmer Esther Seyffarth defined a bot in a Medium post last year as “a program or agent that generates content and posts it to Twitter automatically, following some schedule or reacting to some trigger.” In the case of Twitter’s literary bots, or “corpus-fed” bots, programmers take a body of work—for example, the text file of War & Peace as it stands at Project Gutenberg—and build a program that “reads” the novel, 140 character at a time, “aloud” by publishing sensible whole-word extracts as tweets from a dedicated Twitter account.

To give an example, the code behind one such bot begins by breaking the whole text up into sentences. If a sentence is <140 characters, it checks if that sentence and the next sentence still come in under 140; if so it adds the next sentence and carries that on for as long as possible before tweeting it. When sentences run longer than 140 characters, the bot waits for a semi-colon, comma, or words like “and” or “but” (words the developer has listed in order of importance), then splits the sentence at the point of the pause and tweets the clauses separately.

@finnegansreader is a great introductory example of a literary bot on Twitter: it publishes extracts of James Joyce’s Finnegans Wake, 140 characters or shorter, in sequence. Liss Farrell was studying for a PhD at the Irish Institute of the University of Liverpool when she encouraged her friend Timo Koola to build the bot. She recalls: “I don’t think either myself nor Timo were expecting the Finnegans Wake bot to become so popular! I think I was doing my MA when I asked him about it on a whim—as he had set up the Ulysses bot, I guess there seemed to be an audience for it.”

What’s the appeal of a bot like @finnegansreader? Non-sequiturs, synchronicity, and the enduring Twitter-appropriate gift of brevity. Liss writes,

Finnegans Wake is hard enough to read in context, but I particularly appreciate when a tweet will encapsulate half a dozen or more of Joyce’s puns, neologisms, and portmanteaux. Joyce really rinses the character limit. […] There’s also a delicious satisfaction when a bot “gets it right”: when [former First Minister and Sinn Féin politician] Martin McGuinness stepped down, FW was tweeting about ‘angry scenes at Stormount’ [sic!]. On the night of the first episode of Bake Off the other year it was talking about cake.

Farrell also recommends @antainbot, which tweets the 1500-year-old Old Irish tale An Táin Bo Culaigne. Another appeal of literary bots is making something “new”; @antainbot maker Neal Ó Riain says: “Taking this thing that began life as a story told by druids and putting it on the internet next to tweets about news and pop culture is something that I find interesting.”

As well as building @finnegansreader, Koola also built @Ulyssesreader. The Finnish programmer initially intended it to set a pace for him as he attempted to read the quarter of a million-word novel. He explains: “I first tried to read Ulysses back when I was 17. I got stuck on page 512 of the old Finnish translation. When doing a serious attempt 23 years later, I coded a bot to keep my reading pace up. [The] bot reads through the book in bit more than three months, and I almost managed to match that. All of a sudden, I had read through Ulysses.”

The bot has been popular with followers from creative professions, literary students and teachers, and only had a bit of negative feedback, Koola reports, from people who thought @Ulyssesreader was someone commenting on a current topic, not realizing it was a bot. With his bot now on its tenth reading, Koola promises @Ulyssesreader will continue to run for an 11th and 12th cycle: “As long as there is Twitter or something of the kind there will be more readings.”

Looking beyond Irish literature, cult authors like JG Ballard and Lovecraft are also popular sources for bot-builders, and one account (@ballardbot) is tweeting a list of chapter titles from the bibliography of the former. English and Korean readers can follow @virginiawoolf7 for occasional quotes, but the selection repeats about once every ten days. In general, big books work best, as the 2013 creation @mobydickatsea demonstrates. Its pinned tweet—“Damn me, but all things are queer”—has so far resonated with the over 1,200 who’ve liked it. But, as Farrell pointed out to me, this account is not a true bot—rather, it’s run by a person who selects and publishes quotes from the book: “That gets tiresome after a while. Half the fun of the bots is seeing phrases you didn’t notice or appreciate before.” A new updated account, @jabtheperegine, tweets from J.A. Baker’s The Peregrine, but again is not a true bot: the book’s in diary form and easy to tweet sporadically from TweetDeck.

Bot fans looking for more experimental examples can check out Mark Sample’s William Carlos Williams bots, @Justtosaybot and @dependsuponbot. Unlike the literary bots that tweet a whole book, bit by bit (referred to as corpus-fed bots), bots like Sample’s look at the patterning of language. @Justotosaybot, which apes WCW’s “This Is Just To Say,” has been the more popular of the two; its pinned tweet demonstrates the appeal of the gap between the bot and the original poem:

I have eaten
the horrors
that were in
the toilet

Forgive me
They were postmodern
so ornamented
and so unwavering

The synchronicity that Farrell praised in @Ulyssesreader is also part of the bot’s appeal. An extract published hours before Trump’s travel ban was overruled, read simply:

The irony is that like @ulyssesreader, @sapphobot is not making a single reading of If Not, Winter: the “doom” tweet has appeared repeatedly, and not just since the US elections. As one tweet puts it:

someone will remember us
I say
even in another time

//platform.twitter.com/widgets.js
The language is repeated, “remembered,” again and again, the repetition offering some relief from the news cycle.

Literature, in the manic context of Twitter, feels like a novelty—the joy of witnessing something, somewhere, committed publishing an entire work. But at times, the bots feels uncanny too. Coincidences that arise between their tweets and the memes, gifs and beef that frame them can be as disruptive as it is delightful. Novels, titles and poems “out of place” unsettle us: not amping our anxiety like the news does, but sounding through the fog to wake up something deeper. We double-take, re-read and find originality in repetition. After all, literature—if we can define it at all—must be whatever forces us to read or listen more closely. Part of me was relieved to find Anne Carson doesn’t use Twitter, but like Joyce she seems like the kind who’d be a natural. For now, though, the retweets will have to speak for themselves.

For more information on making your own random generation bot, see Allison Parrish’s tutorial for learning Tracery, a language created by Kate Compton, and you can see the scripts behind Timo Koola’s @ulyssesreader and Neal Ó Riain’s @antainbot on their respective GitHub sites.

Ellie Broughton is a freelance arts writer. She has previously written for the Telegraph, Independent, Refinery29 and Time Out, and had pieces published on the Caught By The River and 3AM websites, and in Elsewhere. She lives in London. 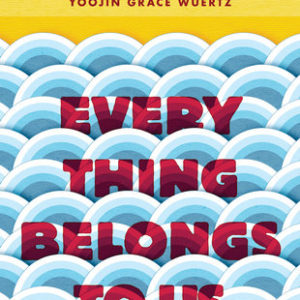 Namin could not remember the first time she and Jisun noticed each other. All the girls were new to one another at the time,...
© LitHub
Back to top