The author of Anarchipelago
on the Emergence Magazine Podcast

Marveling at worms, fungi, and the pioneering water bear, Jay Griffiths brings our attention to what dwells beneath our feet, inviting us to remember that soil is what turns the Earth’s barren rock into the riotous life we know.

The earth of my garden is the heart of my home. All summer, my garden is the hub of my life: I read here, eat here, talk here, drink here. My friends spill out of the house merrily onto the grass, with candles and drinks. There are other characters here too: the rain, the wind and sun. The rain is sometimes gentle, sometimes fierce; the wind is eloquent and sometimes angry; the sun sometimes soft but often strong. Beneath them all, the soil, shyest of all. The garden links all these elements: earth, air, fire, and water.

Just so, soil (the pedosphere) is at the heart of the biosphere. As the English diarist and scientist John Evelyn wrote of soil in Terra (1675): “the best, and sweetest, [is] enriched with all that the Air, Dews, Showers, and Celestial Influences can contribute to it.” It uniquely intersects with the water of the hydrosphere, the air of the atmosphere, and the rock of the lithosphere.

Soil is the source of our sustenance during our lifetimes. Harvests upon harvests; sheaves of corn piled together reaching the skies; mountains of apricots; grapes a mile deep: the soil provides sheer bounty, plenty, and abundance. This is the overground beneficence of Earth’s soil, but it holds subterranean beauties as well. Sand, silt, and clay particles combine to form soil, and the clay carries a surface electric charge. Good earth contains air too, pores for roots and water. The colors of soil include oxisols, the tawny color most often found in tropical rainforests; spodosols, the gray-yellow of boreal forests and heathlands; ultisols, which can be almost purplish, pale orange, low yellow, or red; and vertisols, the earth of savanna or woodlands, which may be gray, brown, or deep, deep black, known as the black earths in Australia, or the black cotton soils in East Africa.

Soil is usually illustrated in the vertical and described as if you are digging downward through, first, the humus or topsoil and then down further into the subsoil and on down to the bedrock. These layers are called “soil horizons”: when we look down, we see the horizon that gives us food. One soil horizon is called the “eluviated horizon,” a phrase to conjure with: eluviated, rejuvenated, alleviated with the movement of rainfall, a transporting of matter further downward. All this, when you look down into darkness.

Underfoot, there are colonies of microorganisms, countless and complex catalysts in symbiosis, in a lively world tingling with life. More than half of all terrestrial biodiversity is in the soil. Fungus, specifically mycelium, and worms, mites, and bacteria create life’s fertility and regeneration, and topsoil is created by creatures that can break down leaf litter and wood into the richness of humus, cycling food from deadness to make thriving life.

Who else dwells here below? Rotifers, their tails turning like wheels. Protozoa. Amoebae. Nematodes or roundworms, some feeding on fungi and some being food for fungi and bacteria. (It’s all feast down here.) There are forty thousand named species of mite. Here, too, there is the hardy tardigrade, better known by its endearing moniker, the water bear, champion of sheer survival; and also the glorious Collembola, or springtail, that can jump a hundred times its own length. These miniature shapeshifting jesters can alter their size and shape rapidly if they need to. And they have eye patches. While some Collembola live on the top of Mount Everest, they are also the deepest land creatures on the planet, one species found in a cave in the Western Caucasus at a depth of 1,980 meters underground. They were coaxed out (reports Andy Murray, Collembola-lover, writer, macro-photographer, musician, juggler, and archaeologist) with cheese.

The most visible and well known of the soil dwellers is the worm. I love the worms in my garden, the wriggly, glistening worms that work the soil that sustains the trees that grow the apples that feed me. The tumult of worms in the compost bin are the ones I love most of all, though sometimes I worry that their effervescence is due to the coffee grinds. If I dig over the compost, I want to apologize to the worms first, and offer a prayer of gratitude to them for their quiet ceaseless work. They make the soil soft, silky, supple, and moist, and its fresh, fertile earth-scent is heaven sent.

Jay Griffiths is the author of Anarchipelago; Pip Pip: A Sideways Look at Time, winner of the Barnes and Noble Discover Award; Wild: An Elemental Journey, winner of the Orion Book Award and shortlisted for the Orwell Prize and the World Book Day Award; and A Love Letter from a Stray Moon. She broadcasts widely on BBC Radio and her writing has appeared in the Guardian, Orion, Lapham’s Quarterly, the Ecologist, Dark Mountain, and more. 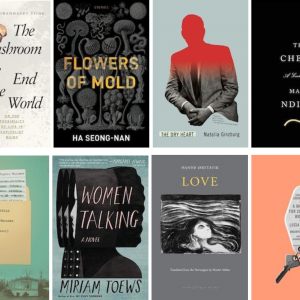 This is the third and final part of our year-end series wherein we ask booksellers to tell us about the highlights of their...
© LitHub
Back to top